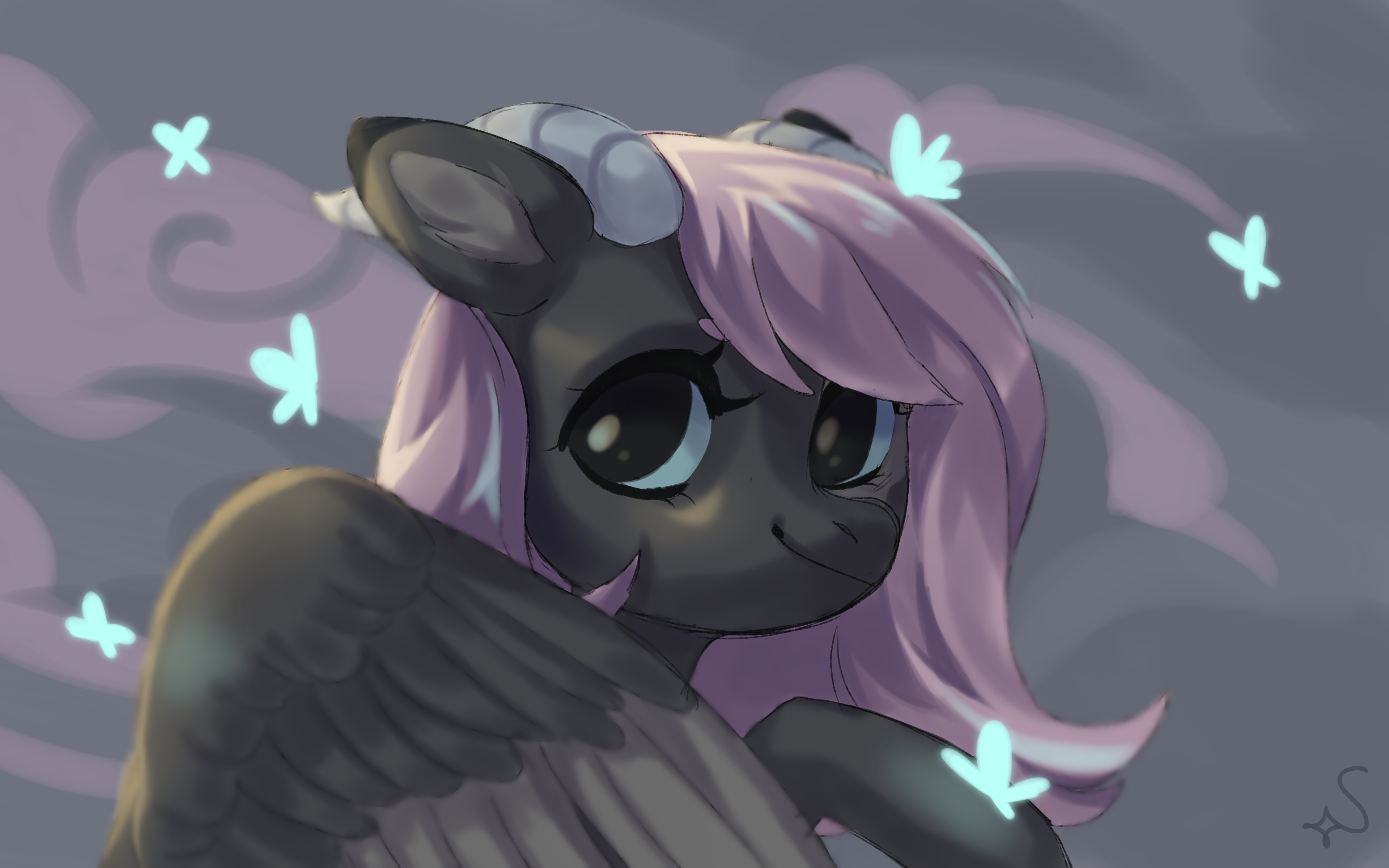 Some of my OC's updated story -

A blog by Pandora in General 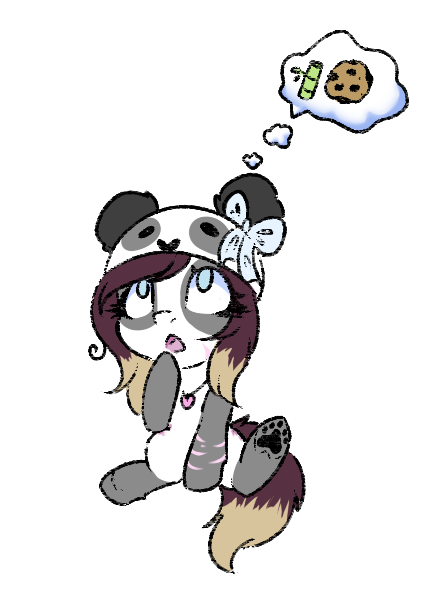 Pandora is a small panda pony, still young.
When she was little she traveled with her mom and big sister to ponyville but because she was a curious little dummy.. she wandered off and got lost, her mom, being as cold as panda’s can be left pandora behind rather than going to look for her, her sister hasn’t stopped looking for her ever since though.. but had to go back to their own home ‘pandasia’ with the mother,  Su Linn.

The little bean ended up surviving on her own by having to stay in caves and nomming on random things.. this is until she met the pony she now calls her ‘papa’ or ‘papa floof’ – Poli star agasha, he adopted her into his family. She immediately saw this big fluffy giant as her papa regardless if they didn’t even look the same, she felt safe with him.

Pandora always wears her pandabeanie, this is to cover up the sprout on her head. The sprout works similar like life support, if this gets damaged.. pan will be hurting and so on therefor it must be kept safe.. yet the beanie works well for hiding little things under it aswell. She does not grow tall, she stays small – below average size.

The bean always carries her bamboo plushie around named ‘Squishy’
She doesn’t talk a lot though, making her almost a mute.. she speaks in third person and limited words / sentences.
Aka “Panpan wants..panpan likes cookie”
Her chin scar is from falling on top of something as a little foal and she had to get stitches at the time.

Pandora herself, choose ‘ghostbit’ as her big brother. She’s the one adopting them into their silly little family and loves him to bits. She can usually be found around him or her papa. She has been too young to understand that she was abandoned by her mom and doesn’t really remember her sister, a pink panda pony.

Personality:
She is a very clumsy little panda pony who occasionally topples over and bumps into things. She is almost always happy unless something happens that she doesn’t like, then she’ll pout and puff up her cheeks before crying. Everything is ‘fun’ or interesting to her, minus.. baths.. unless she gets to play with stuff! 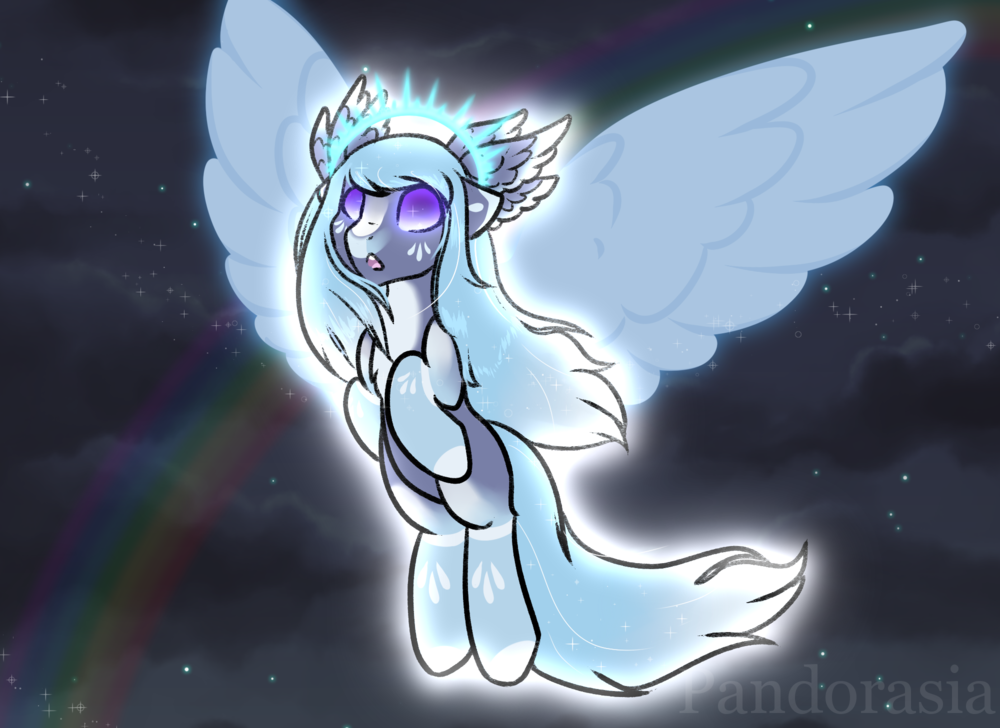 She was sent down to protect the ponies of Equestria and takes on the biggest creatures that create chaos. Her halo glows brighter when there’s danger nearby. Her actual wings are hidden and only show when they must. The only wings visible to ponies are the ones at her head. Her halo is however visible to everyone.
Her eyes tend to glow if she’s fighting and or/ trying to heal someone.

She can read memories by placing her hoof on somepony’s head and can also change up the bad memories – turning them into good ones therefor.. quite like manipulation.
This angel doesn’t like unholy things and can get damaged if a demonic creature is to touch her – She could even lose her powers as an Angel.
She does not kill those that are bad, she sends them back to the place they came from or tries her best to turn them into a much kinder creature than they originally were. If she is to kill something.. she is considered a dark angel and will be stripped from her wings and power. They must only protect all that is living.

Personality:
She is kind in general but can also be very honest and forceful. She does not like ponies who are rude and is not afraid to show that. She will always do her best to help but if failed, she can be harsh on herself and might have fear for what comes next.

Nawa - the pharaoh; [warning this OC has unfortunately be stolen a lot from me therefor is partially retired]
there's a viewer discretion advised for Nawa 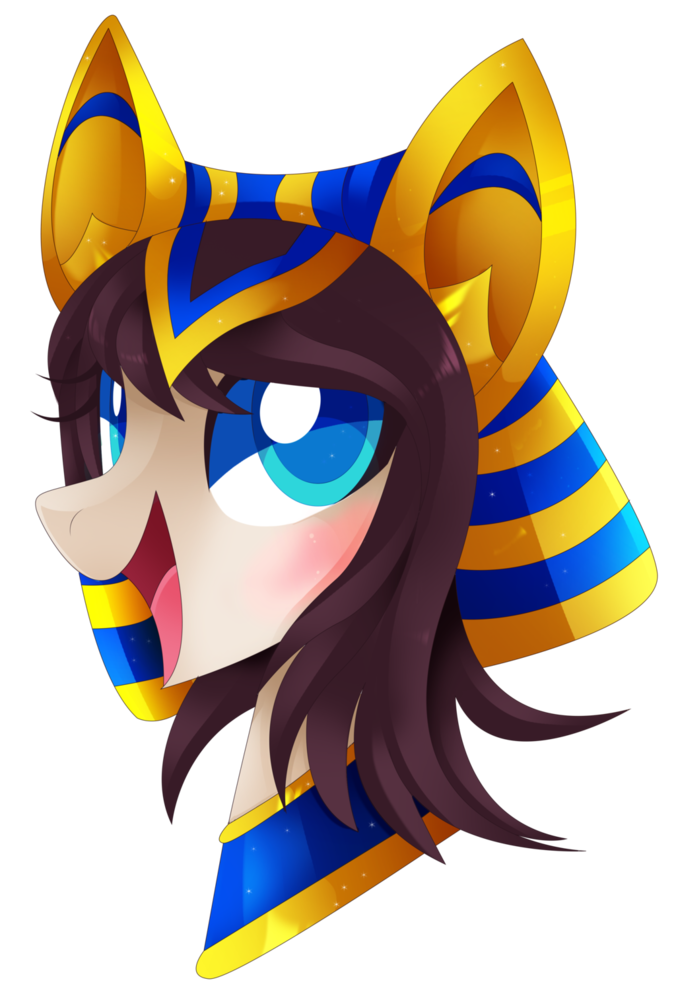 1. The normal pharaoh
The normal pharaoh is a being shy of nature yet careful and caring, she will do anything to make sure her people are doing fine and will often help with anything. her coat helps her withstand the heat and sandstorms. She has two pet dogs and always wears her headgear. This headgear contains ancient magic and she will use this to protect herself and her city. She is often around in the city to help her people. If she's not then she's out and about helping ponies learn more about the language they speak and giving them secret guiding through the tombs aswell as secret archives only she has access to, does this keep them from danger? Hell no. Nawa will try to interact with the ponies and will do her best but often she also has to pull back to rest, everything might take it's toll.She herself may want to travel one day but she cannot leave the palace unprotected for long. Nopony else gets to be on her throne. This Nawa is a lot nicer than the mummy one but even she has her limits and is not afraid to use her headgear, even she has a dark side and will destroy a city if need be. If Nawa is treated poorly she will not hold back on having anypony as her slave and have them go through the horrors of it all. Nawa can be as kind and loving as she wants to be but her bad side is quite evil and dark.

However...The Nawa from now has been reborn and has been taken in by a traveler. He is her new family and helps her understand all the things in this new world. (New to her, old to others)
Because Nawa is from a different era here she is a lot smaller than most ponies as those ponies had not yet evolved as much nor developed as much, she can still speak ancient tongue.

2. The cursed mummy (pharaoh aswell)
This pharaoh pony can only be found in her tomb far, far away in the egyptian desert of anubisia. There she was put to rest with all of her treasures aswell as her pet dogs, this pharaoh had been cursed by an evil yet powerful sorceress and has doomed her to one day rise up again while ponies that she once knew have been long gone. The headgear that she used to wear is floating above her tomb. Every night when clock strikes 12 this pharaoh will rise up from her grave to haunt the tombthat ponies will often come to search through, if they dare touch any of her belongings let alone the most precious one they will be in serious danger until they've found the cure to either bring her back to life fully or to let her rest in peace at last. This pharaoh's father was Anubis. She has some powerful tricks up her sleeve but she is not unbeatable, she is mainly a lost being that has to live through a horror show every single time the clock strikes. If ponies dare touch her headgear she will rise up fully and will be sure to attack whichever pony tried touching it. This pharaoh has empty eye sockets and her body is quite literally falling apart-- don’t be afraid of bones cracking-- be afraid of her loud echo’ing screams.

The mummified pharaoh can change for the better depending on how one treats her. Her curse can be lifted if somepony is willing to seek the fountain that can undo this curse, a fountain that is no longer working and hidden under a mountain of sand. Only books of ancient history will be able to tell where it’s supposed to be and what to do incase of it not working anymore.
She once loved a egyptian named khai – taking anything that belonged to him will make her chase after whoever it is that tried to steal with death as result.

The mummfied pharaoh has a green – glowy aura around her indicating toxic and decay. Her head gear glows a similar green color which is known to draw ponies in. The headgear is what contains all of the power.

Nawa likes (version 2. Mummy)
Using her power, Scarabs, has a desire for love but cannot obtain it due to her condition, her mummified dogs, her treasures, Khai
Nawa dislikes (Version 2. Mummy)
The curse not being lifted, being disturbed, her looks (if one shows her with a mirror even though her eye sockets are empty, she can feel it by their fear and sense mirrors)

Spells:
1.Nawa can summon the Plagues with her headgear
2.She can summon a small army of the dead
3.She can make the ground open from underneath to summon either a god for some reason or send something back to where it came from
4.She has the ability to bring the same curse upon those who tried to steal from her

I need your help with character name

Hi everyone, I need your help with naming a egyptian themed OC {comment to give me other names} I will not show character yet - they do have hints of anubis but I'd rather not have it named that but if no other is choosen worthy he will be named that.