I don't know if you've noticed... but I don't show my enthusiasm for things quite in the same way my sister does. - Maud Pie

The Mane Six are gathered outside Sugarcube Corner to meet Pinkie in the pink before dawn, wondering why she called them to meet her so early in the morning. She invites them in, and they find she's been a tad busy cooking... 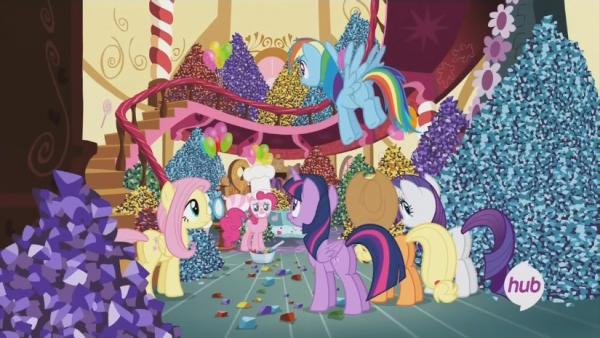 ♫ In the Big Rock Candy Mountains,
There's a land that's fair and bright... ♫

Many courses of rock candy later, the Mane Six have tooth pains and stomachaches, but Pinkie really wants them to choose the best flavours so that they can make best-friend rock candy necklaces with her sister Maud, who is coming to visit. It's a tradition between the two sisters, and Pinkie wants her friends and sister to share it together. She explains the origin of this tradition via art shift. She also mentions that she and Maud have been sending the necklaces back and forth since she came to Ponyville.

In the next scene, the Mane Six and their pets are waiting at the picnic, Rarity wearing a gigantic crystal rock hat, which is falling apart. One crystal lands in the muffin bowl. As they discuss their anxiety that everything will go well, Pinkie appears and announces that she and Maud have arrived. It takes quite a while longer for Maud herself to appear, though, and her pace is best described as sedate, in contrast to Pinkie's rapid bounce.

Not only is her walking sedate, her overall demeanour is very placid. She pauses a while before she speaks, and when she does speak, it's in a rather flat monotone. Twilight welcomes her and introduces the others. Rarity then steps forward to ask her about her dress and what it "says", only for Maud to point out that it doesn't "say" anything. On account of being a dress. Ahem. Burn? Rarity retreats. Next, Applejack tries by introducing the pets. Maud has her own pet rock (natch), named Boulder.

As the picnic erodes on, Applejack offers Maud a muffin. She eats the rock that dropped in earlier instead, pronouncing it "crunchy". Now this is the point at which I first started to "get" Maud. She's soon to complete her Rockterate in Rock(et) Science, so she clearly isn't stupid enough to mistake a rock for a muffin. I think she did it deliberately, as a gag. Then she was probably wondering why her jokes were not going over well with her new acquaintances. See, she's not the "opposite" of Pinkie Pie in personality. She's just as wacky and fun-loving as her younger sister. The difference is that she expresses herself very differently.

Rainbow Dash comments that Pinkie said Maud likes games, and Maud suggests they and Boulder play "Camouflage". It's like hide and seek, only waaaaay more intense. They spend the rest of the day looking at all the rocks in the nearby areas, trying to find Boulder. After hours, Maud announces she's found him... he was hiding in her pocket. Again, this seems like straight up trolling by Maud, and again, it doesn't go over well.

Fluttershy suggest they call it a day, due to popular pet demand, and Pinkie, Maud, Gummy and Boulder say their goodbyes. Despite the rather stilted first encounter, Twilight suggest that maybe meeting in a big group was making Maud shy, and that one on one will work better.

First up is Rarity, who tries to design some clothes for Maud, only for her to choose a dirty old dishcloth. Then when Rarity brings a bunch of them, she says this one will do and drapes it over her back. This is high quality trolling, especially since she stays deadpan when Rarity actually laughs at the joke. But she stops before the gag goes too far, and before Rarity spends actual time sewing the dishcloths together.

On a nature walk with Fluttershy, we again meet Hummingway the hummingbird, and get introduced to a species of spider that Maud seems to have taken an interest in. Maud says she was looking at the rock. 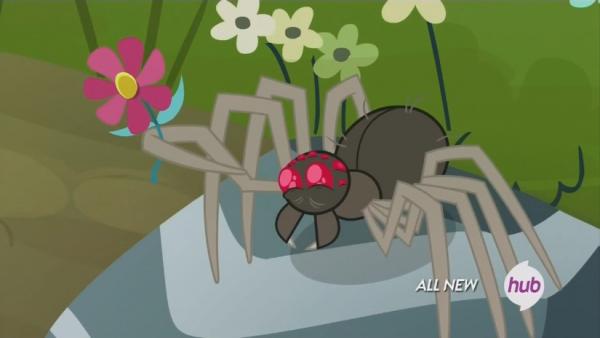 He's taking it pretty well. (That flower must be a spider-orchid.)

Next is Twilight's turn. Maud mentions she likes to recite her own poetry. You'll never guess what the topic is... yes, existentialism, nihilism and the absurdity of being, what else.

At Applejack's farm, she helps with cider making by "peeling" apples with a rock. She still seems to be wondering why her rock-based humour isn't working. Rock tossing with Rainbow Dash also reveals a similarity to Pinkie Pie... Maud hurls the rock so far it pretty much creates a nuke. So she seems to have Pinkie's reality-bending powers, at least as far as rocks are concerned. RD concedes defeat, only for Maud to troll her by claiming she doesn't like winning. 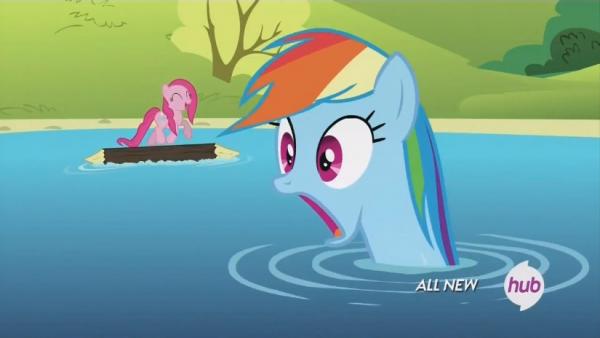 Pinkie, have you been into the poison joke again?

When they gather at Pinkie's to start making the necklaces, the group are forced to tell Pinkie that they don't feel it would be honest to make Best Friend Necklaces, because they just haven't clicked with Maud. Pinkie's mane deflates a bit, but she says she understands, leaving the rest feeling very guilty. Back at the library, a newly reenergized Pinkie bounces in to say she's figured out something to bond everypony.

It's a giant obstacle course with something for everypony, including a giant rock tower to slide down. As Pinkie demonstrates each part of the course (applesauce slide for Applejack, shiny fabric pile for Rarity, a book wall for Twilight, a poker game of critters - I'm sure Maud would win that hands down... haha, get it, hands? - for Fluttershy, a cupcake wind tunnel for Pinkie, the rock slide for Maud; and the whole thing is a race for Rainbow), she gets trapped on the rock slide, and the giant rock at the top starts to slide down. 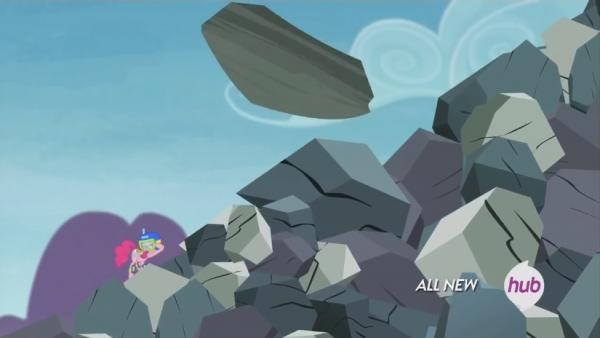 Boy, talk about your rock and your hard place...

Before any else can react, Maud springs into action, flying through the obstacle course, leaping into the air, and drilling the rock into harmless pieces with her bare hooves. Showing the most emotion she has yet, she tells Pinkie that she went a bit overboard trying to make her friends Maud's friends. She decides to spend the rest of the time at the rock farm. Pinkie goes with her, leaving the rest to contemplate. As they talk, they realize that there is something to bond them with Maud...

When the two Pie sisters arrive at the rock farm, the Mane Six are waiting for them. They apologize for the rocky start to their relationship, and explain that their mutual love for Pinkie Pie will be their bond, and ask to try again. When Maud still sounds the same as before, Pinkie points out that she is really excited, she just doesn't look it. A week later, and at the train station, the Mane Six each give Maud a necklace they made. When Pinkie and Maud trade theirs, Maud opens a box filled with every necklace Pinkie ever gave her. Only Twilight is around to see it, and she asks why Maud hasn't eaten them. Maud responds that she doesn't like candy... 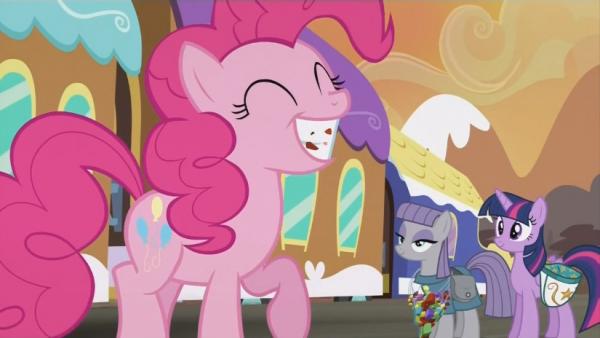 Thoughts on this episode

There were 3 squees in this episode. That's too many. I'm really having to look hard for negatives here, because this episode is virtually perfect.

Maud is delightfully funny, being so perfectly deadpan. As I pointed out, though, I think it's more of a issue of her introverted outer shell masking the chaos that's really going on inside. She isn't that different to Pinkie Pie inside, but as she herself says, she expresses it differently. Maud is a small pool that goes deep, hiding a lot under a calm surface.

This episode is more of a character study of Maud than anything. No major events take place, no morals as such are learned, unless it's the moral of letting others express themselves as they want to. The constant rock puns were amusing in the low key way that Maud herself is amusing. This sort of humour is very much in line with what I like, so I found it very entertaining.

Pros: Simple plot. Some very dry humour. Maud looks awesome, whether smiling or not.
Cons: Too much squeeing.

Stay rocky side up...