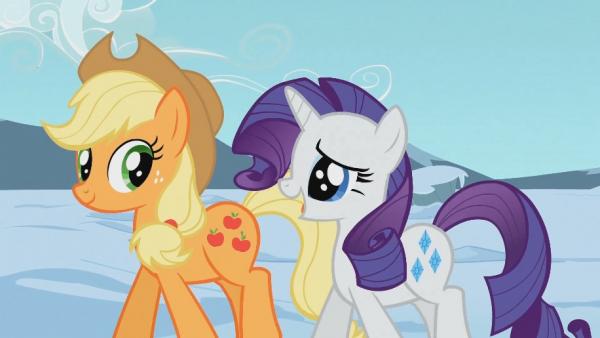 This relationship has definitely seen the most development. From barely being able to stand each other for more than a few hours in “Look Before You Sleep”, they now seem to be quite firm friends. Of course, Rarity still tries to get Applejack to be more ladylike, and Applejack still thinks Rarity needs to be less fussy, but overall, they seem to have come to an understanding of each other. Applejack’s selflessness devotion to her family has helped Rarity strengthen her bond with Sweetie Belle, where before she was a little selfish. Applejack taught her the importance of compromising.

Highlights:
Episode 46. “It’s About Time”: Applejack fixes the crack in the dam, while Rarity fixes up the leaves in AJ’s mane.
Episode 53-54. “The Crystal Empire”: Applejack cheers Rarity up with a kind word in “The Crystal Empire”.
Episode 61. “Spike at Your Service”: Rarity teaches Applejack how to play the “damsel in distress”.
Episode 73. “Rarity Takes Manehatten”: Applejack says bluntly, “Yep, you were pretty rotten…”
Episode 78. “Simple Ways”: They each parody the other. 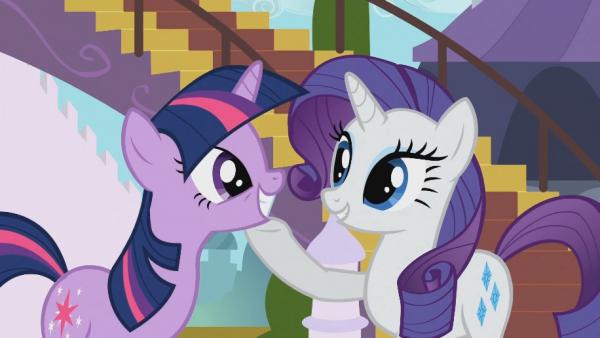 I don’t usually ship Mane Six members together, but when I do, it’s Rarilight. If I were one to let subtext reign supreme, I would believe these two are already in a relationship. Right from the first episode, Rarity has been very touchy-feely with Twilight. Just go watch the end of “The Crystal Empire”, and tell me she doesn’t act rather tenderly towards Twilight there. She was the first to start singing, went to Twilight to raise her head up with a gentle touch to the chin when Twilight blushed, and put her hoof over Twilight’s as the train left. Sorry, Spike, you’re losing out to your adopted big sister.

Even if you ignore the subtext, it’s clear Rarity has a strong regard for Twilight. She noticed she was bothered in “Lesson Zero”, she worried about Twilight not having her crown in Equestria Girls, and most importantly, although she wanted to marry a prince and be a princess, she has never once expressed the slightest sense of jealousy that Twilight is now a Princess and not her. That’s pretty telling, because she was jealous of Fluttershy, and they’re probably the two who spend the most of their time together. 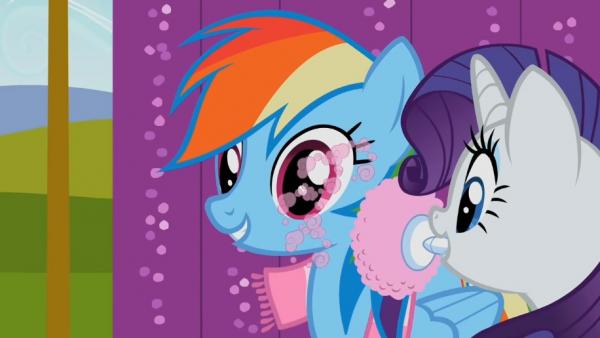 Rarity’s relationship to Rainbow is similar to Applejack, only with a lot less butting of heads. They don’t usually interact, and when they do, it’s pretty low key. We mostly see Rarity doing nice things for Rainbow, like making her a pretty dress for Princess Celestia’s visit, or supporting her in competitions... at first. Not much else to say.

Highlights
Episode 14. “Suited for Success”: Rarity facedesks when Rainbow can’t be any clearer about her dress than it needs to be cooler.
Episode 47. “Dragon Quest”: Rarity tells Rainbow she was surprised her plan worked, and gets a rump to the face in response.
Episode 61. “Spike at your Service”: Rarity gives Rainbow a very snarky response to her fanfiction plot, which goes right over Rainbow’s head.
Episode 75. “Rainbow Falls”: Rarity takes the relay horseshoe to paint it, to Rainbow’s annoyance. 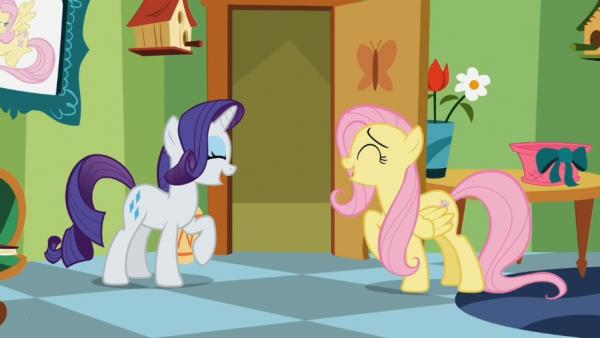 Indications are that Rarity and Fluttershy have been firm friends for a very long time. They often have spa dates together, and Rarity frequently tries to bring Fluttershy out of her shell. Being the prettiest and second-most ladylike Mane Six, they seem to have a lot in common. Their Elements are also quite compatible, since Generosity is being giving with one’s possessions and Kindness is being giving with one’s time and emotion. Other indications of their closeness include Fluttershy helping Rarity with Opal, Rarity calling on her when she needs someone to fly up and help her borrow the Castle decorations. She also tried very hard to be happy for Fluttershy when she caught the eye of Photo Finish, and felt terrible when she was envious. She also very quickly forgave Fluttershy for the vicious tongue-lashing she got in “Putting your Hoof Down”. 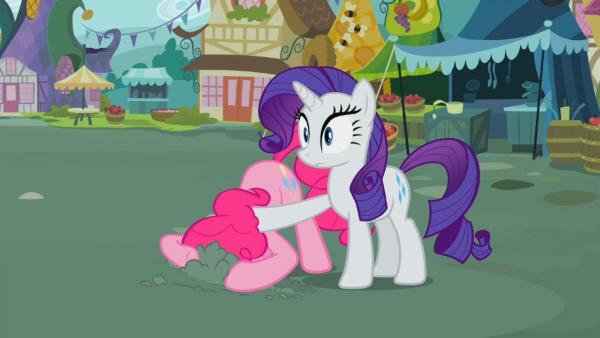 Again, not really much to say here. Rarity is sometimes exasperated at Pinkie’s antics, and can even be quite stern with her, but they tend to get along very well most of the time. Pinkie also seems to put some trust in Rarity. In “Last Round-up”, she simply leaps off the stagecoach and tells Rarity to catch her.

Highlights
Episode 7. “Dragonshy”: Pinkie beats Rarity at Tic-Tac-Toe… 35 times in a row.
Episode 45. “Putting Your Hoof Down”: Pinkie and Rarity team up to help Fluttershy be more assertive, but she does so badly that Pinkie buries her head in the ground. Rarity tries to comfort her with a gentle hoof on her mane.
Episode 62. “Keep Calm and Flutter On”: Rarity checks her reflection in Pinkie’s newly polished hooves.
Episode 73. “Rarity Takes Manehatten”: After Rarity delivers her “going down in flames, isn’t friendship magic?” line, Pinkie gives her a sheepish grin and nods agreement. 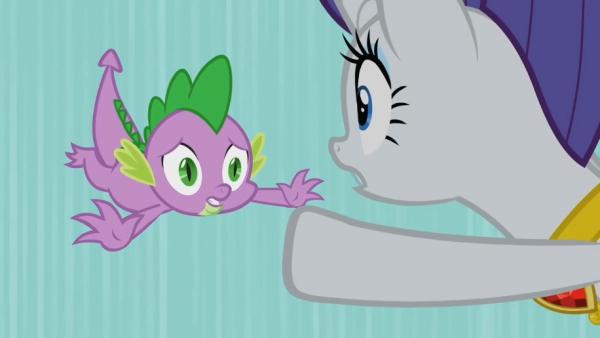 This is one of the most important and talked about relationships in the series. Ironically, given that FiM doesn’t have much by way of romance. A lot of people give Rarity grief over what they see as her taking advantage of him. In some ways, they’re right, but it’s actually much more of a give and take than is sometimes recognized. Yes, she gets him to do stuff for her, but most of the time, Spike’s perfectly okay with it. And she’s hardly the only Mane Six who does. She also frequently gives him rewards for his troubles, such as gems to eat, a carrot-dog, etc. She also sticks up for Spike frequently, and went to great lengths to keep him safe in “Dragon Quest”. It’s clear that she does care for him in her own way.

I suspect that Rarity simply doesn’t know exactly how to handle Spike’s precocious crush on her. After all, by the standards of dragonhood, Spike is not even a teenager yet. She can’t view him as a romantic prospect, but she cares for him and certainly wouldn’t want to hurt his feelings. So, until she can find a way to let him down gently, she keeps their relationship at status quo. Perhaps in her mind, letting him do things for her is a way of showing that she does want him to be around. Not always, of course, but I think that’s a large part of it.

Highlights
Episode 19. “A Dog and Pony Show”: Spike valiantly defends Rarity from the Diamond Dogs.
Episode 36. “Secret of My Excess”: The most touching Rarity-Spike moment, as he tries to confess while falling, only for her to shush him and show that she already knows.
Episode 61. “Spike at your Service”: She takes a bite out of his terrible pie to make him happy.
Episode 73. “Rarity Takes Manehatten”: Rarity gives Spike that carrot-dog, which is promptly stolen by a bird. He has it again later, so either he got it back or bought a replacement.

Rarity seems to be deliberately avoiding taking after her parents, who seems like very friendly, if unsophisticated types. Middle class is probably a good way to describe them. We don’t yet know if her dad is a unicorn or earth pony, due to his hat. (BREAKING NEWS - He actually is a unicorn, as shown in "Imagination Manifestation"!) She hasn’t really interacted with them enough to get much of an idea of how close she is to them.

While Opal can be temperamental, she seems to have affection for Rarity in her own enigmatic cat way. Her moods follow Rarity’s, and she tries to remind her mistress of her priorities at times. Opal seems to stoically suffer some of Rarity’s more whimsical tendencies, such as her baby-talking and coddling.

Rarity’s relationship with Sweetie Belle is the focus of a fair number of episodes. While their sisterly relationship has had its ups and downs, Sweetie Belle clearly looks up to Rarity, and Rarity clearly loves her and tries to do good things for her. While she took her a bit for granted in earlier seasons, Rarity has gotten much better at compromising, mainly due to the events of “Sisterhooves Social”. Where before she would put her own comfort and desires first, she’s now more willing to sacrifice them for Sweetie’s sake. The most recent episodes have shown that Sweetie has long been harbouring a grudge for Rarity overshadowing her, and they may become even closer now that Sweetie has realized that Rarity doesn’t want to keep her in her shadow.

Highlights
Episode 31. “Sisterhooves Social”: We get to meet Rarity’s parents. This episode also improves the sisters’ relationship.
Episode 35. “Sweet and Elite”: Opal taps the design for Twilight’s dress, and is annoyed when Rarity doesn’t notice.
Episode 58. “Sleepless in Ponyville”: Despite despising camping and “all that… ugh… nature”, Rarity is willing to brave the wilderness for her sister… as long as no heavy hauling for her is involved. Sweetie doesn’t seem to mind, just being glad that Rarity is there.

Catching the eye of this stallion is one of the best things ever to happen to Rarity. He’s also later appeared in Ponyville and Manehatten. Could he be following Rarity around? And is that supermodel pony who always hangs on him just eye candy, or a romantic partner? For Rarity’s sake, I hope not!

Creepy shrine? Check. Trying everything she can to win him over? Check. Learning that changing yourself for someone else is a bad thing? Check. Getting over him? 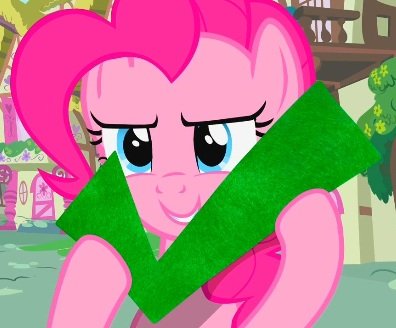 Along with most of the others, Rarity is skeptical of Discord’s change of heart. She blames him for the embarrassment of making her think a rock was a diamond, and so she has little patience or sympathy for him.

Photo Finish was rather abrupt to her, made Fluttershy a star and caused Rarity to feel like she had betrayed her best friend by being so jealous. Photo Finish has yet to return in a speaking part, but she was present in a cameo during “Sweet and Elite”, so we could speculate that Rarity is over it.

Apart from acting like a prat, he used her as a pony shield against flying cake. In the dress she was terrified somepony would spill something on in “A Bird in the Hoof”. A crime against fashion! After she told him just what she thought of him, she was forced to flee, and smashed her glass slipper so that he couldn’t find her. Despite this, he also had a cameo, so perhaps she has forgiven him too.

Although Trixie has done some nasty things to her, Rarity seems to dislike Trixie mainly because of how she treated Twilight. Perhaps we can learn more if Trixie gets another episode (I’m counting the minutes 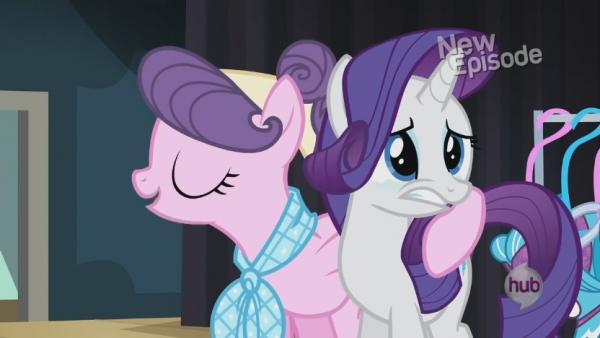 Suri represents what Rarity could become if she lost her sense of generosity. And morals in general. Although Rarity was deeply hurt by her betrayal, she didn’t try to excuse her own bad behaviour towards her friends. She also doesn’t seem to feel a need to get revenge on Suri for taking advantage of her generosity. Perhaps she considers Suri losing her talented assistant, Coco Pommel, to be punishment enough.

And with that, I draw this three-part analysis of Rarity to a close. Do you think I was accurate? Do you disagree with my points or have something more to add? Any comments are welcomed.

Until next time, stay Rarity-side up!