Look here are three little fillies / Ready to sing for this crowd. / Listen up, ‘cos here’s our story / We’re gonna sing it really loud! – Scootaloo

As the episode opens, Applejack is leading the Cutie Mark Crusaders towards a secluded area of Sweet Apple Acres. They arrive at her old treehouse, which Applejack offers to let them use as a club house. The three fillies’ response is in a word, subdued, mainly due to the fact that the clubhouse is literally falling apart, as Applejack finds out when she tries to lean on one of the walls.

Despite the dilapidated condition of the club house, the CMC decide to use it. Scootaloo busies herself with drawing a map of Ponyville and riding her scooter around, doing tricks and leaping over tree branches (foreshadowing her skill at scooter riding and other physical, kinesthetic skills.) 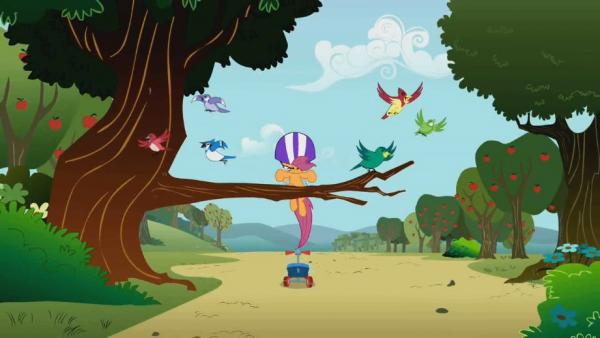 Who directed this, John Woo? 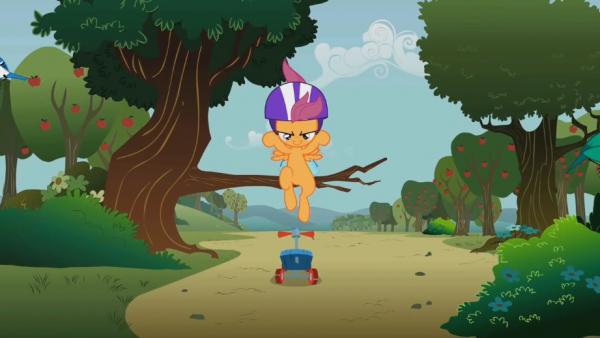 Or maybe it was the Wachowski Brothers Wachowskis?

Meanwhile Apple Bloom fixes up the club house, making it as good as new, sanding, painting and so on, which impresses Scoots when she arrives (foreshadowing Apple Bloom’s skills in arts and crafts.) They head off to find Sweetie Belle, following the sound of her voice as she sings the theme song with lyrics that she is working on (foreshadowing her skills as a songwriter and singer.)

When Applejack comes to check up on them later, they are busy singing their new theme song, but Scoots manages to hit a discordant note, making AJ wince (thus giving us some foremuffling – I know that’s not a real word, just go with it – instead of foreshadowing.) She compliments them on their hard work, and hears their plans to leave no possible vocation unattempted, aided by their map. After she leaves to buck some apples, the CMC go from place to place in Ponyville, attempting things. However, each attempt ends in disaster and a distinct dearth of cutie marks. 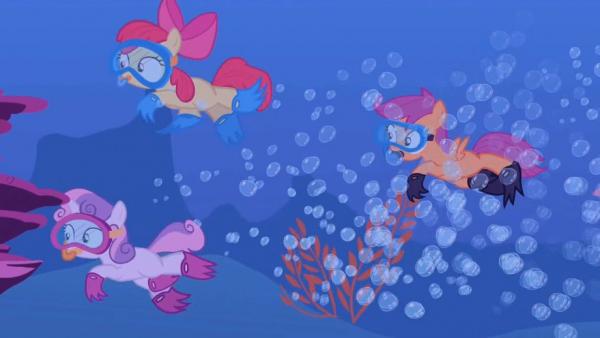 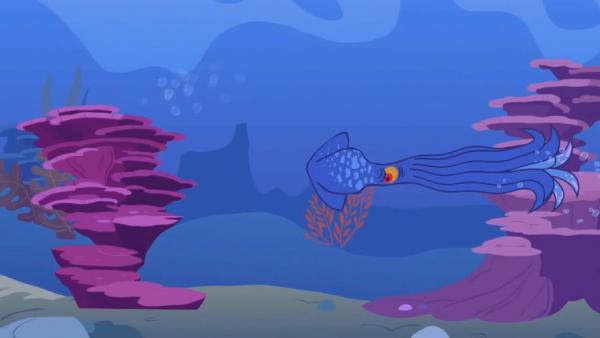 And in one case, a distinct surplus of squid… how did that get there, anyway?

They end up in the library, just in time to meet Twilight and Cheerilee. Twilight tries to advise them on trying things they already like, rather than random activities, while Cheerilee suggests they join the Talent Show to be held soon. There are prizes to be won, and they just might get their cutie marks there.

The three fillies decide to do an epic rock ballad for their Talent Show appearance, and of course choose exactly the wrong role for each of them to play. The tone-deaf, kinesthetic genius Scootaloo wants to write the song and sing instead of dance, the crafts-savvy Apple Bloom decides to combine kung fu and dancing instead of making the set and props, and singer / song-writer Sweetie would rather do the crafty things instead of actually sing in front of a crowd. They also steal some of Rarity’s supplies and borrow some items from other ponies around town.

As they plan their performance, we see just how much they suck at the task they chose for themselves. Each of them provides advice to the others that further reinforces how much better suited they would be to the work than the pony they are advising. As they practice for the final performance, AJ checks up on them again, only to be horrified at how badly they are doing. She isn’t able to bring herself to tell them so, though.

On the night of the performance, Twilight comes to wish them luck, and tells Sweetie Belle she’s looking forward to hearing her sing. To her consternation, she hears that Scootaloo is singing, AB is dancing and Sweetie is doing the props. Before she can advise them any further, their turn comes up, and they run off to perform.

In an homage to “Bohemian Rhapsody,” the three fillies start off with only their faces lit up as Scootaloo sings the opening lines. Poor Applejack in the audience lets out an audible groan, and the rest of the crowd is simply transfixed by how bad it all is. As the song goes on, various things go wrong, like AB and Sweetie colliding in midair, a fan accidentally being turned on to full, and the shoddy props and set pieces starting to topple, eventually collapsing onto the three fillies just as Scootaloo mangles the finishing lines. The three pop up from the wreckage, eager to see the crowd’s response – which is gales of laughter.

Disappointed and embarrassed, the CMC slink offstage. However, they are soon called back for the presentation of the awards. To their surprise, they find that they have been given an award – for Best Comedy Act! They decide to just go with it, happy that they won. They eagerly check to see if this has given them their cutie marks, but alas…

Twilight is first to congratulate them, and gets hopeful when they tell her that they know now that they should embrace their real talents. All seems set for them to finally realize the folly of their ways, until they announce that their true calling must be COMEDY! As the fillies run off the talk to their various sisters / sister-figures, Twilight is left to give us the closing lines… “Someday…”laughs “Someday…”

The main highlight of the episode is the stylistic suck of the song, which manages to be a bad performance while still being an enjoyable one. According to the audio commentary, Scootaloo’s voice actor, Madeleine Peters, actually sings very well, and the constant need to sing badly on purpose ended up putting a lot of pressure on her, enough that she ended up getting ill from it. None of this is obvious while watching the episode though, so definite kudos to Ms. Peters.

A rather funny note about the awards though… we don’t see a performance from them, but the Bully Duo is shown on the stage, along with the magic act pair of Snips and Snails (showing that maybe they’re not entire useless after all, and a continuity nod to their adoration of Trixie – however undeserved – and her magic act) as well as Sunny Days (Daze?) and Peachy Pie (relation to Pinkie currently unknown) reciting poetry on rollerskates. 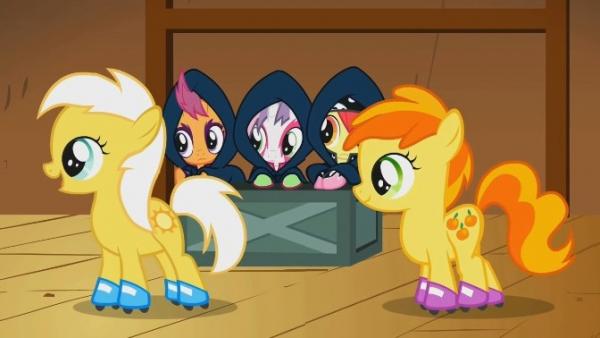 Talk about your “poetry in motion”!

All of this means that Silver Spoon and Diamond Tiara performed, but didn't manage to win any kind of award! Take that, biotches!

There’s also a heart-warming moment in the final scenes, where the CMC show off their awards to the older ponies. Although Rainbow Dash is not technically Scootaloo’s sister, she is there along with real sisters Applejack and Rarity, which makes this the first example (possibly, could anyone confirm that?) of Scootalove!

On the downside, the moral lessons are a little bit murky. Actually, what even IS the moral of this episode? Here’s some bad ones I found: “Stupidity is rewarded.” “You can have an entire stage of set pieces fall on you and not be hurt.” “If you obviously see someone is doing something wrong, which will end in disaster and embarrassment, you should just let them get on with it, rather than be honest.” (And that one comes from Honest Applejack, for extra facehoof points!) For a first season episode at least, the moral should be easy to identify. Maybe I’m just being stupid – wouldn’t be the first time – and missing the good moral lesson among the bad ones.

Another flaw lies in the writing. While entertaining, the entire premise of the episode is an Idiot Plot, purely to keep the CMC from actually getting their cutie marks, so that the status quo can be preserved. While this is not so bad a goal, really, it does end up dampening my enjoyment of the episode a bit. I felt like shouting at the three fillies to stop being so stupid! It does at least provide us with a little more development for the fillies, and hints towards what their special talents may be and how they might suss them out.

As they prepare, Sweetie doing the backdrops:
Apple Bloom: Uh... maybe you should also clean your paintbrush between each color.
Sweetie Belle: Oh, I was wondering why all the colors looked like mud.
Apple Bloom: You're not using power tools, are you?

The whole song and dance performance.

Pros: A bit more light is shed on what sort of talents each of the CMC might one day realize leads them to their cutie marks. The main song is so bad it’s good, and really shows off the acting ability of the voice talent cast. The comedy is pretty good, especially the epic fails as they plan and execute their performance. First evidence of Scootalove.

Cons: Idiot Plot, which provides a lot of frustration. It ends on a possibly questionable set of morals. It’s the second CMC episode in a row. There are some animation errors. Twilight says “My little ponies” far too many times.

May your props always stay sunny side up! (And not look like mud.)