Pinkie Pie opens the episode with a song as she travels to each of the Mane Six and sings out an invitation to Gummy’s birthday party. As she visits each of them, her song gets slower and less energetic as she tires, and when she’s finished, she just manages to crawl up the stairs to her room before slumping to the floor.

By the time of the party, though, she’s totally recovered, and the party proceedings are in full swing. RD and AJ are bobbing for apples, and find some of Pinkie’s surprises… Gummy tries to reenact a scene from Alien by face-sucking RD while AJ grabs a ball that’s tethered to the bottom of the barrel, pulling her head in for a dunking. Rarity is enjoying the punch… until she sees that Gummy swimming in it. 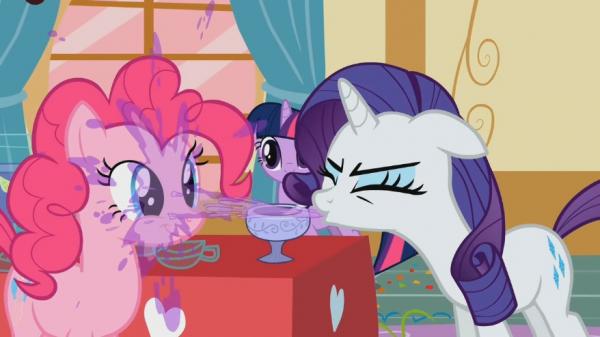 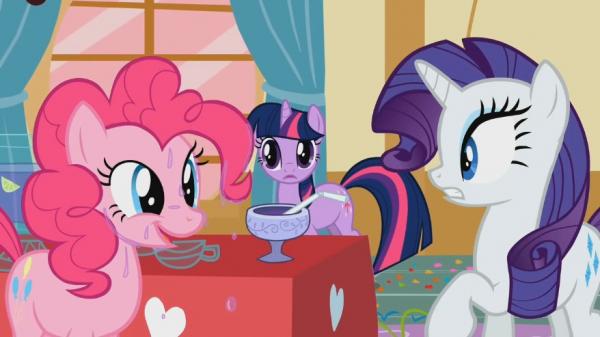 Pinkie’s enthusiastic dancing causes some pain for Twilight and Fluttershy when she bump-bump-sugar-lump-rumps them into opposite walls, but overall, the party guests are really enjoying themselves. As they leave, happily worn out from partying, Pinkie tries to get them to stay a bit longer. Twilight says that they need to go, but they should “do this again soon”.

Early the following morning, Twilight finds that Pinkie has taken her parting words a little too literally. She gives Twilight an invitation to Gummy’s After-Birthday party that she’s throwing this afternoon… as in this afternoon this afternoon. Twilight declines, lying about having too much study to catch up on, and Pinkie accepts it. She also tries to give invites to Applejack and Rarity, but they also refuse, giving very weak reasons for why they will be busy. Pinkie gives Applejack a gimlet glance for a bit, but eventually goes on her way with a cheerful “okey dokey lokey!”

When she finds Fluttershy and Rainbow Dash to invite them as well, they give the flimsiest excuse yet… they are looking after the house-like cave of a bear while he vacations at the beach so he can play volleyball / collect seashells collect volleyballs / play seashells. 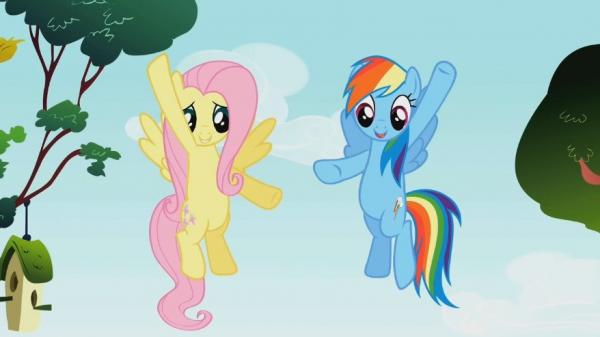 Typically for Pinkie, she’s perfectly willing to believe the thing about the bear, but the rest of the reasons seem now more like excuses to her. Her suspicion grows when she sees Twilight sneaking around instead of studying. Twilight comes into Sugarcube Corner to pick up an order from Mrs. Cake. Pinkie eavesdrops on the conversation with a tin can telephone, but despite Twilight noticing it, she manages to hear enough to know that Twilight is keeping something back from her.

As she follows Twilight, with more and more outlandish disguises, she sees that all of her friends are part of the conspiracy. When she confronts Rainbow Dash about it, Rainbow tries to run away, but like in Griffon the Brushoff, she can’t evade Pinkie’s cartoon powers. After being chased by a freakishly fast Pinkie Pie, she manages to escape into Applejack’s barn.

Applejack manages to stonewall Pinkie enough to force her to “okey dokey lokey” again (much more threateningly) and leave, but she is determined to find out what her friends are hiding. Luckily she knows just the young dragon to interrogate…

This turns out to be a really bad idea, since not only does Spike NOT know anything about what’s really going on, but the grilling pressures him into repeating back to Pinkie exactly what she suspects: that her friends don’t like her or her parties anymore. Hearing her suspicions “confirmed”, Pinkie goes into a depression, with her mane deflating like a popped balloon, and her colour becoming duller.

She finds solace in a party with her new friends… various inanimate objects that Pinkie starts to believe can actually talk and move on their own, even though we see she’s the one moving them and making all the voices. Her madness deepens as she mulls over the way her friends have been acting, causing even Gummy to head for the exit. Into the midst of this steps Rainbow Dash. She apologizes for avoiding Pinkie earlier, and tells her she wants Pinkie to come with her to Sweet Apple Acres. Pinkie refuses, wanting to remain with her “real friends” instead. Visibly weirded-out, Rainbow tries to persuade her, but Pinkie pushes pile of rocks with a party hat named Rocky into her path. “Rocky” calls Rainbow a chump, and she starts to response as if he were real. Realizing what she’s doing, she give up on words and resorts to brute force. When Pinkie's resistance causes Rainbow to fall over, she gives the page quote, and then literally drags Pinkie all the way to the barn, and shoves her inside. 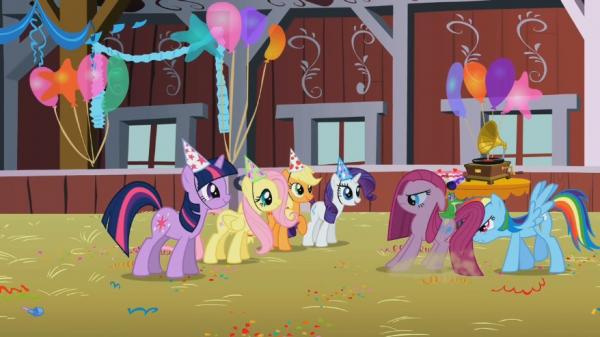 Inside, the Mane Six are waiting with a surprise party. Misconstruing the party as a celebration of her impending exile, Pinkie finally vents her anger at them for all lying and avoiding her during the day, but they explain they HAD to do it to keep her from finding out about this prematurely, because it’s actually a party for Pinkie’s birthday! Finally realizing that she misunderstood her friends’ intentions, and that she forgot her own birthday, Pinkie returns to normal form.

At first, she feels bad that she misunderstood them to such a great degree, but Twilight assures her that it could have happened to any of them. (Not likely, but she’ s trying to comfort Pinkie, so I can let it go.) As the party gets into full swing, Twilight voice-overs the letter to Princess Celestia she will write: always expect the best and never assume the worst of your friends.

Like the 4th Season episode “Somepony to Watch Over Me”, the episode starts out so ordinary, and yet manages to take a really creepy turn towards the end. The contrast is even greater considering that the usual Pinkie Pie antics make up most of the episode, as she tries to get to the bottom of what her friends are hiding from her. Then came the party scene with Pinkie and her “new friends”, the inanimate objects. The slow distorted circus music in the background, the tic and twinges from Pinkie, the way the objects were first being moved by Pinkie, and then started moving on their own… 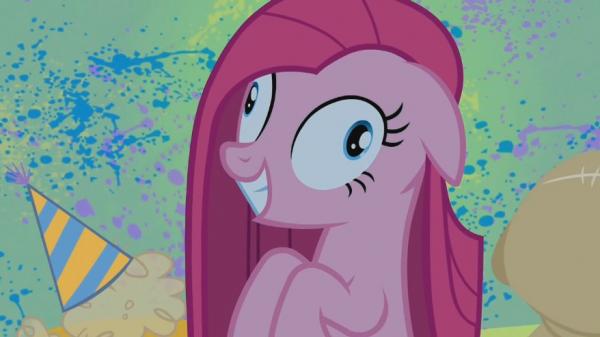 This expression pretty much sums it up.

It manages to be both amusing and disturbing at the same time. Luckily, Rainbow Dash comes in to dispel the tension a bit.

Many fans blame Spike for Pinkie’s depression, but Spike has often shown in the past that he doesn’t pick up on non-verbal clues very well. For example, he called Rarity out and applauded in Suited for Success despite the silence and Rarity’s utterly defeated body language. He also cheered for Pinkie’s song in Over a Barrel, even though the audience obviously thought it was terrible. And he did tell her that he would say whatever she wanted him to, so she really only has herself to blame.

I personally don’t think of Pinkie and the so-called Pinkamena as alter-egos, so it irritates me a bit whenever fans treat them as two separate entities. Straight-haired Pinkie is just depressed Pinkie… and I actually like the way it looks when her hair is straight like that. I also have never read, and never intend to read Cupcakes. Still, I won’t let such things as I just mentioned dull my enjoyment of the episode itself.

This could be just a coincidence, but the title of this episode is a possible reference to a short TV Programme that airs every New Year’s Eve (in South Africa, my home country, at least), called “Dinner for One”. Like the party scene here, it features a party with imaginary guests, with each role being played by the butler of Miss Sophie, James. Unlike here, the poor butler gets drunker as he drinks the alcohol for every one of the imaginary guests, and hilarity ensues.

After Pinkie Pie chases her all over the town, Rainbow Dash finally escapes into Applejack’s barn.
Pinkie: “Mind if I take a look inside the barn?”
Applejack: “No. I mean, yes! I mean, you can’t come in here.”
Pinkie: “Rainbow Dash just went in there."
Applejack: "Oh, well, she was just bringin’ in… supplies! Supplies for the... renovation! Yep, fixing up the whole thing, top to bottom…” Glances over her shoulder* “Uh, lots of construction goin’ on in there right now!”
Twilight (off-screen): “You heard her! Construction!”
Everypony starts imitating the sound of construction, poorly.
Twilight (off-screen): “Safety gear! Safety gear!”

Pinkie’s delightfully dark and disturbing descent into dementia with her new party friends.

Pros: A surprising creepy look into the psyche of a pony who is supposed to be the joy and the laughter in the series, while still keeping a comedic overtone to the proceedings. Great expressions from all the Mane Six.

Cons: None really worth mentioning.

And with that, Sunny Fox Reviews Season 1 is done! It’s taken a lot of time and effort, and to be honest, I’m feeling a little burnt out. I may just take a break from blogging for a month or so, recharge the batteries, and hopefully, I can come back with some fresh content for you guys. Muchos gracias to my regular readers and commenters, it’s good to know that there are those who enjoy reading my ruminations enough to keep coming back to my little den in this corner of the interwebs. Take care and happy trails until we meet again!