This one is exceedingly overdue, but today we come to the modern masterpiece from the Mexican maestro's mind, Pan's Labyrinth. I was actually questioning whether this film could be counted as a horror film or if it was just fantasy of the darker variety.

- Guillermo del Toro keeps a large collection of notes and sketches that he uses to generate ideas and stories for his films. The notes on Pan's Labyrinth were once lost in the backseat of a British cab. Del Toro was afraid he lost them forever, but the cab driver sought him out just to return the notes. Del Toro took this as a sign that this movie had to be made; he turned down working on The Chronicles of Narnia: The Lion, the Witch, and the Wardrobe and gave up his salary to make sure it happened. But when offered Hollywood backing, del Toro refused, not wanting his vision to be compromised.

- Intended as an informal sequel to The Devil's Backbone. Originally about a pregnant woman that falls in love with a faun.

- The faun in question isn't actually the Pan of Greek mythology, who is known for his sexual escapades and is wholly inappropriate to feature opposite a little girl. That's just the American title; everywhere else in the world, the film is called The Labyrinth of the Faun.

- The actor under the Faun and Pale Man makeup is Doug Jones, who you may not recognize as Billy the Zombie from Hocus Pocus, Abe Sapien from the Hellboy movies, and the leader of the Gentlemen from Buffy the Vampire Slayer. A native of Indianapolis, Jones was the only person on set who did not speak Spanish and had to learn the language for the role of the Faun. He was later dubbed over, but Jone's efforts made it so the lip-synch was near perfect.

- An actor was almost killed when a horse fell on top of him.

- Ofelia was meant to be played by a younger actress, but Ivana Baquero impressed del Toro enough that he slightly rewrote the part to fit the casting. Del Toro sent comic books to Baquero to read so she could get in the right head space.

- The captain's quarters were designed to look like the inside of his watch.

- There was originally to be a sequence in which Ofelia tells a fairy tale involving a dragon, which of course would had been visualized, but it had to be cut due to budgetary reasons.

- The English subtitles were written by del Toro himself, who was not satisfied with the translations of his previous works.

- Doug Jones reportedly kept condoms full of fake blood in his mouth for the bit where the Pale Man has a snack.

- The Faun's horns weighed ten pounds and were tiring to wear after awhile.

- Movie theaters had to put up a warning after people kept taking their kids to see the movie about the little girl who escapes the horrors of fascism and war only to find a monster that tries to eat her alive and a pissy faun.

- Stephen King attended a private screening, during which del Toro notice him squirm in his seat during the Pale Man sequence.

- Received a 22 minute standing ovation at the Cannes Film Festival. 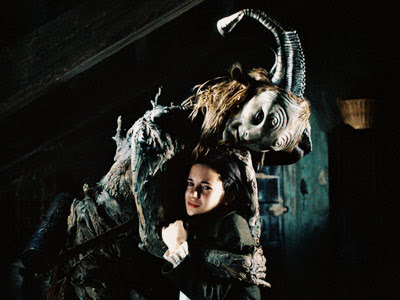