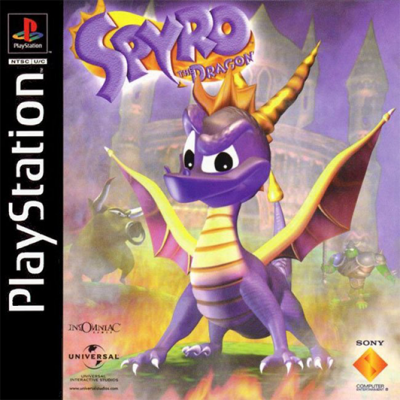 Oh boy, it's another classic game that we have here. Spyro the Dragon is a 3D platformer made by the now famous Insomniac Games. When it arrived, it captured the love of many gamers and became one of the most cherished games of the 32-bit era. Why you may ask? Well, let's find out! 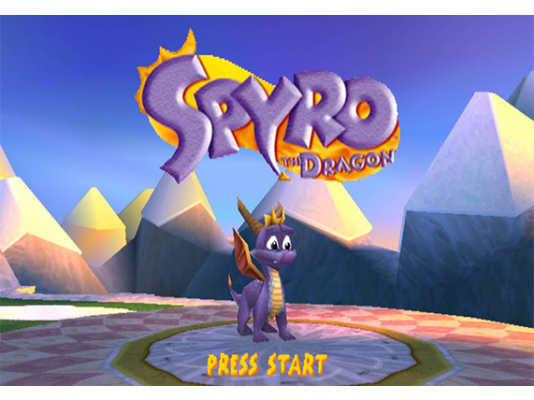 That simple yet glorious title screen.

In Spyro the Dragon, you play as...Spyro, sometimes titles give away spoilers. In the beginning of the game, you see a bunch of large dragons having some sort of interview for...something, as you can see a microphone hanging above. They discuss the state of their treasure and then, an evil character known as Gnasty Gnork. Once a dragon starts insulting him and then calls him ugly, he somehow hears this and gets a bit cheesed off, turning all of the dragons to stone, except for one. I will give you one guess on who that is. Yeah, the story here is very slim but that intro holds a place in my heart for being simple yet kinda funny in a way. Just don't expect anything serious here, it's about the gameplay!

Once the actual game starts, you begin playing as Spryo. Your main objectives are to collect treasure, defeat enemies, explore worlds, and free dragons from their stone prisons. Spyro controls quite well. You roam the world with full 3D control. You can jump, charge, breathe fire, glide, and more. This gives Spyro a really fun sense of control, you are controlling a small dragon and it definitely shows. Several enemies have different ways that they need to be defeated, such as being flame resistant, too big to charge, or even both! I really like the variety of enemies throughout the game. The only real problem that the control has is some slight camera issues, they are only majorly apparent sometimes when jumping or running back, but the camera can be oriented to your liking. There are some jumps that can be troublesome too, but it isn't a game breaker at all. 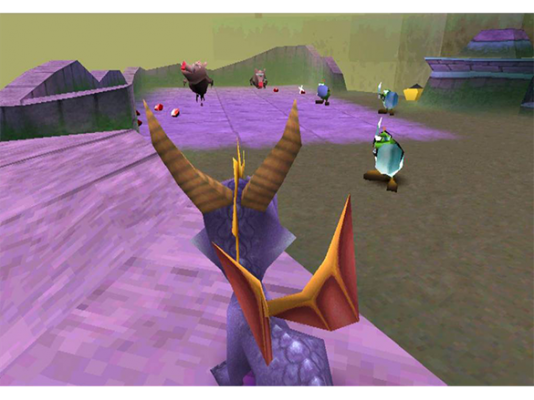 Wonky textures cannot stop this game at all

There is also a dragonfly named Sparks that indicates your health. When you kill sheep, they release butterfly's somehow and these are consumed by sparks, raising his health. The controls may not be entirely perfect, but for the time, they are very well executed, especially for the first game of the series. Taking out sheep for the purpose of gaining health became a staple of the series.

As you free dragons, they will tell you certain hints or random facts, or sometimes just a simple 'thank you' and that's it. Each dragon has a name and while having a main collection mechanic being the focus is not unique, this was one of the better ones of the time. For some reason it is quite satisfying when freeing them, especially when reaching a difficult one. Freeing them also leaves a platform that can be used to save your game. You have to free a certain amount of dragons to advance to the next overworld, which has its own number of stages. 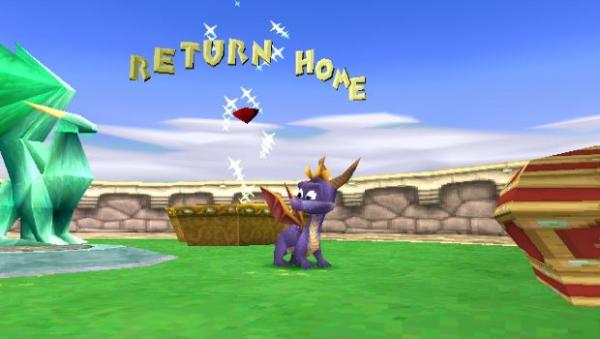 Go home Spyro, this is where you belong (in good games)

The graphics might be hit or miss depending on your preference. Like many 32 bit games, the graphics can be kinda choppy in places and kinda fuzzy too, but this is expected. Other than that though, the game does have a charming visual look. The world is vibrant and colorful and the enemies have nice variety in their designs. I personally enjoy the graphics in the game. The nighttime levels have a very distinct look that I like as well.

Speaking of the levels, they are great too. There is a good variety of places and worlds to see, each with their own particular style and brand of enemies. The later levels do get a bit more challenging, but overall the game never seems too hard, not until the final boss. If you want a platformer that will test you constantly and make you sweat, this isn't one of those, but that isn't a bad thing. Thats not to say the game is a cakewalk though.

The last thing I want to mention is the sound. The game boasts some great music with its own very unique style. Like Crash Bandicoot, it is music that goes very well with the game. Each stage has it's own music, usually to accompany the style of the level itself. The game also has voice acting, as (sorta) mentioned earlier. Spyro and the other dragons have pretty funny voicework though they don't speak often. Overall the voice acting is pretty entertaining at times but not really great, not that it needs to be. 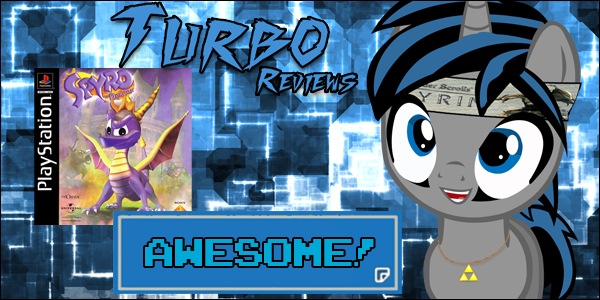 Spyro the Dragon is a game that I cherish and I find it hard to find any major flaws with the game. It is one of the best platformers and overall games for the Playstation. It features great platforming, fun dragon abilities, unique and varied enemies and worlds, and great sound to go with those. The camera and some jumping might be a bit problematic in places, but the rest of the game makes you forget about that. It is an adventure from my childhood that I won't forget. I suggest playing it if you haven't. The graphics might seem primitive now, but the gameplay makes up for that entirely, even with its slight problems. In my opinion, this is a more fun and varied game than the other major platformer for the PS1, Crash Bandicoot. Despite any little annoyances here and there, Spyro is platforming bliss.

+Control, for the most part, is very fun

+Varied worlds, each with their own style

-Camera can be a bit wonky at times

-Some jumps provide a bit of trouble

Thank you for reading this week's Turbo Review! It's a shame that Spyro is not really Spyro anymore, thanks to Activison.