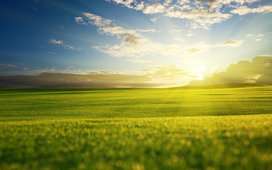 This is from two years ago. I didn't really write much, but let me know what you think. If I get enough positive feedback and encouragement, I might start posting complete chapters here to share with my friend here if I do continue. We will see.

The Sun was beautiful. It was always beautiful. It was timeless and ageless. Even after an incomprehensible passing of centuries and millenniums, even after what seemed like an eternity of eternities, the Sun remained. If God had chosen to have a daughter, it would of certainly have been the Sun. The Sun was the eternal spring of life and its scorching flames have been erupting from its molten and seemingly immortal pool of super-heated gases since the beginning of the book of time. This glorious ball of passionate fire and light had existed before the very worlds it gave birth to. It was destined to be the center, a core of origin, the symbol of a beginning. It was one of the many genuinely burning bright marbles dropped intently by God into the sea of utter darkness, for the grand purpose of giving meaning to the blanket of void and despair. As a result, the first and the foremost greatest gift to ever have been given was given, and that was: the gift of life. Nothing in existence can ever hold as much as a profoundness of meaning as the very essence of Life itself. And no kind of life could have ever been any more grateful for having the opportunity to exist and enjoy the delight of this privilege, as much as humanity.

From the earliest points in ancient history, humans had always valued and praised the Sun for its everlasting warmth. Some saw it as a divine deity, others saw it as a lively world of its own; many legends and folklore stories sprung out of these various uncertainties. Spiritualists and philosophers had pondered endlessly on the Sun's integrity and origin for many centuries. This lead to many romanticized theories and ideologies, which continued on until the rise of scientific advancements and early astronomy came about. Despite the death of these legends and deism of the sun, her beauty and mystery continued to kindle the amazement and wondrous inspiration of astronomers and cosmologists alike for numerous generations. The more that they had learned, the more they discovered, and the more uncountable monumental discoveries they had made, which momentarily lead them to believe that they knew all there was to know, the more that they had discovered how little they knew.

The Sun had inspired the world. Not only had her warmth granted life to the human race, but her presence in the blue lit daytime sky, was always a great timeless blessing to their heart, mind, and soul. The Sun was their beacon of hope, their one and only candle that never ceased to burn out, and their sole provider of life within the endless and formless ocean of darkness. She had always prevented their fate in the ice from befalling them and She had always reassured them that the long eerie nights would come to an end. Her beautiful brilliance and rays of life had forever inspired a wholeness of beauty, romance and hope for humanity. She had spurred a sense of happiness in the artistic minds and passionate hearts of naturalists, writers, and philosophers of culture, art, and literature all throughout history. And most of all, the Sun was the beautiful and timeless symbol of the beginning of day. At Sunrise, the world smiled. At Sunset, the world mourned.

The Sun's eternal presence and ceaseless existence had been one of the very reasons the human race had lived and thrived for so vastly long. And just as the Sun was timeless and seemingly eternal, so were the worlds that revolved around her, and all the life that her warmth had allowed to exist. In some unique perspective, one could argue that the Sun had ultimately been the grand source of time for humanity. The history of mankind wouldn't have been possible without her. Life would have never began. She had selflessly granted them such a longevity of time that went far beyond any comprehension, beyond all expectations. Nonetheless, even through all that time, this common memory of the sun had never changed: At Sunrise, the world smiled. At Sunset, the world mourned.