I... I know the history! I know it all! But how in Equestria did that happen? – Rainbow Dash

Rainbow Dash is busy NOT preparing for an important test on the history of the Wonderbolts, so that she can get into a newly formed Reserve squadron for her dream team. Twilight tries to get her focused, and help her with her own study methods, but the distractible Rainbow Dash finds them to be entirely useless. Reading and highlighting, listening to lectures, using flashcards: all are apparently of no avail when applied to the ADHD addled Pegasus. She’s too busy goofing off to actually learn anything.

When Twilight finally gets through to Rainbow exactly how much important learning this knowledge is, panic sets in, and they start to argue. Fluttershy, of all ponies, breaks it up, and suggests some alternative methods for shoving the history into Rainbow’s brain. Her own recommendation is a play with the pets portraying princesses and ponies alike. Pinkie Pie then weighs in with an old skool rap style number, which Rainbow finds more entertaining than actually useful.

Rarity’s fashion-based tour through Wonderbolt history also fails to help her. Applejack doesn’t have a study method to suggest at all, and in a rather unusual ditzy moment for the down-to-Earth Pony, starts teaching Rainbow the history of apples instead. Finding the group arguing over which useless method is least useless, Rainbow finally gives up entirely and goes into a funk and flies off. Also taking to the air to try and encourage her, Twilight almost flies into a pony in a helicopter. 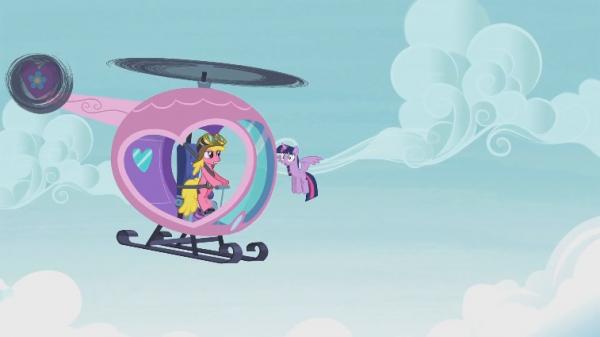 Rainbow manages to push her out of the way, and mentions that she noticed the danger despite carrying on the conversation. She further explains that she keeps her eyes and ears on everything while she flies, maintaining some kind of hyperaware state that lets her subconsciously record even the tiniest details, and consciously keep track of the most relevant ones. Realizing that this skill might be the key to helping her, Twilight bolts off to again enlist the help of the rest of the Mane Six without an explanation, leaving Rainbow… 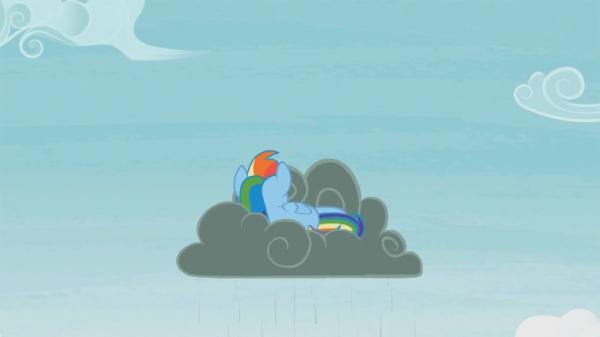 Later inviting the still despondent Dash for another flight, she tries to make small talk as they go, with Dash producing some Eeyore-worthy responses. At the end of the flight, Twilight asks her what she can remember, and Dash begins to rattle off the history of the Wonderbolts perfectly. Shocked and delighted, Rainbow asks how it happened. Twilight tells that during the flight, the whole town was acting out the history below her, and shouting out the important facts – all of which Rainbow was absorbing without even realizing it. This lets her pass the test with flying colours.

Highlights and Quotes
Twilight looks at Rainbow’s highlighting, and we get this obvious parental bonus: 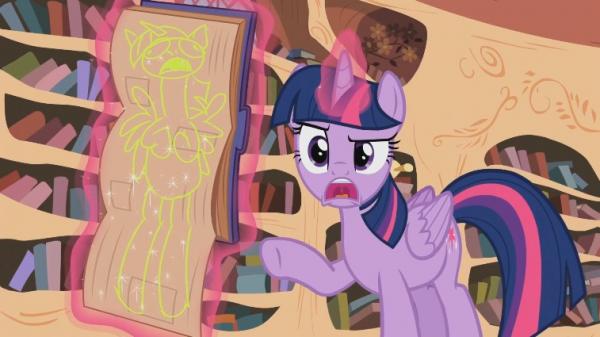 Naa naa nanana naa, and Twilight is the centerfold!
Followed by:
Twilight: Hey, I am not that tall!

Rainbow Dash sees Rarity dressed up in the original Wonderbolt costume.
Rainbow: Rarity, you look ridiculous.
Rarity (unoffended): I am going to ignore that comment out of my desire to help you.

After the historical fashion tour fails.
Applejack: Why, I could tell you every little thing there is to know about the history of apples, but I picked all that up over years in the field as a labor of love. How much time you got?
Rainbow Dash: Twelve hours.
Applejack: (beat) Oh, then you are up a creek.

The Good
While certainly not a laugh-a-minute kind of episode, there was a bit of humour to the proceedings, mainly generated by Rainbow’s class clown antics. And she looked adorable rocking back and forth on her stool, completed by the fact that it ended up being a whole percussion number with the aid of Owlowiscious and Spike.

The dialogue had some gems, such as Rarity’s “I’ll just ignore that” line, and Applejack slipping in a fact about Granny Smith discovering granny smith apples. I was also impressed with Fluttershy’s assertiveness in stopping Twilight and Rainbow from arguing. It’s satisfying to see some of her character development being acknowledged and used in the episode. Even the pets got a bit of time in the spotlight (literally).

It was a heartwarming scene when the entire town stepped up to help out, and a rather subtle joke was worked in there. The CMC shout E! U! P! and Big MacIntosh repeats it as EeyUP! This also doubles as a nod to “Flight to the Finish”, where the CMC represented the three races coming together. Along with Rainbow, we learn a lot of the history of the Wonderbolts, and world-building is always a big plus in an episode for me. It included a mythology nod to Firefly, a G1 pony who was also Lauren Faust’s favorite character, and probably deserves a share of credit for the high quality of G4 and the resulting brony fandom.

Visually, the animators did some really interesting things, such as changing the entire look of the Pinkie rap to resemble old VHS footage, and later “rewinding” and zooming in on the different details as Rainbow sees them on her flights. The shadows of the two ponies moving along the ground and warping as they travel over objects is a fantastic touch, particularly considering that the shadows in the show are usually just circles.

Finally, I want to mention the Aesop of the episode. The moral “everyone has their own way of learning” is worthy enough…

The Bad
…but it gets a little bit diluted by the implication that for some, that way of learning is basically a superpower. It also required an entire town of ponies playing dress up to pull off, so I question the practicality there.

Also, I think Rainbow getting 100% is a little bit unnecessary. Couldn’t she just pass, or get A+ or something? I suppose it’s meant to reinforce the lesson, and maybe be a little bit of a bone thrown for her after so much stress during the episode itself, but full marks? Even the examiner seems to think something’s hinky. Plus we know she’s going to pass, so the whole “did she pass or fail” moment is an obvious red herring.

Final Thoughts
Overall, Testing is a worthwhile episode. The negatives I mentioned are mostly nitpicks, but the moral really does end up suffering due to the way the conflict was resolved by what is pretty much a Rainbow Sense, and not by hard work on her part. Still, there were great visuals, engaging dialogue, and a lot of interesting background on the Wonderbolts. Most importantly, we saw a happy ending for Rainbow Dash and her getting just that much closer to obtaining her dream. Fight on, Rainbow Dash!

Be sure to visit Sunny Side Den again soon!