Want just a quick summary? Check out the Final Verdict for that and my rating! 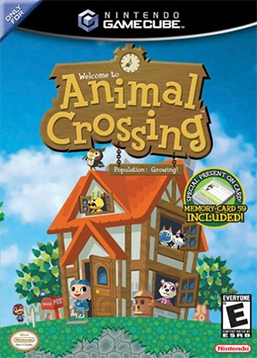 For many, video games are a great escape. There are many times where life really isn't fun and we just want to play a game to escape from that reality for a short time. Now what about a game that loosely simulates life and goes in real time? That could never work! Well, Nintendo made it work and it was awesome.

Animal Crossing has such a deceptively simple premise of gameplay. You start out on a train and after having a nice little conversation with a purple cat (Happens all the time on train rides). Upon having this conversation you arrive in the village that you will call your new home. It is randomly generated for starters and that is a good sign. You are greeted by a raccoon named Tom Nook who kinda sneakily sells you a a house. He is the shop owner in town and he has a way with words for sure. After this, he tells you that you owe him a bunch of money, called Bells in this world, but he is lenient and will let you pay it off on your own time, whenever you please, though the first initial payment is used for the tutorial of sorts. 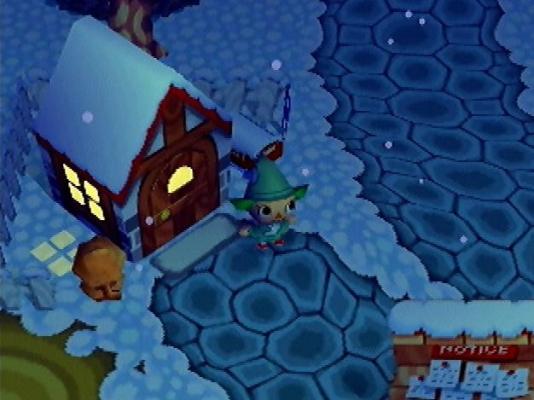 Even when nothing really happens at night, it was always so peaceful

After this, you are free to do as you wish! First off, Animal Crossing runs on real time. Using the clock in your Nintendo Gamecube, assuming you have it set correctly, the game actually goes by your clock and calendar, with of course day and night cycles, events that pertain to such and the seasons even change! This feature alone set it apart from pretty much any other game at the time and it still is the best of that kind. When you are not playing, events will happen even when you are not there! This makes you want to check in every day to see what is new and whats happened.

In the game, you will be chatting with your animal neighbors, who are also randomly generated at the start, doing many simple activities such as fishing, bug catching, planting trees and flowers, picking fruit, and so much more. Even in its simplicity, there is a surprising amount of things to do and to collect. You can customize your home with furniture that you buy from that Tom Nook fellow and as you do these activities, as well as helping fellow citizens of the town (which you name the town by the way), you will get the Bells that you need overtime. Again, for such a simple idea, the game gives you the drive to keep doing these things, as they are fun and watching your house grow and seeing the town change overtime is quite addicting. There is just so much to do! My description does not and cannot do it justice, there is that much content. You can even make custom designs for outfits and more at the Able Sisters! Even just getting new mail or digging something up yields wonder and excitement, which is pretty crazy for something that would otherwise be mundane. 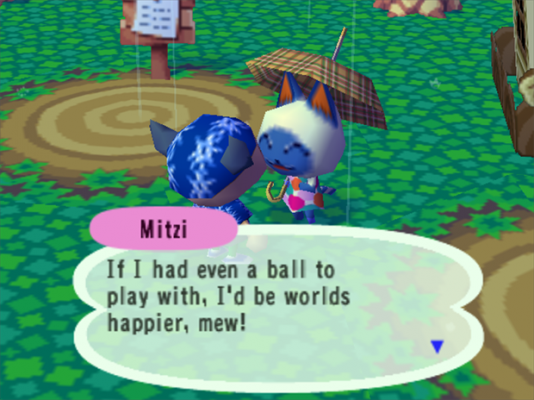 The graphics and sounds really help this game further. The game has a very relaxing atmosphere and it helps make this game be a wonderful escape, even though it itself is kinda like a life simulator. The graphics are very simplistic but they are have a definite charm. They aren't graphically intensive at all but this game was a port of an N64 game in Japan, so really not much can be complained about. the music here is absolutely delightful. Every hour of the day has its own unique, each just as wonderful as the one before it. This game has one of my favorite video game soundtracks by far. Hearing these tunes while walking around in the snow in the Winter time is pure bliss. The other sounds of the game are great in their simplicity as well. The sound of the snow beneath your feet in Winter, the cute chattering of the world's inhabitants, so many things in this game are done so simply yet so effectively. As a side note, I think this game has the best visual and sound styles out of all of the Animal Crossing games.

One other thing I need to mention is that you can have up to four players in one village, though there is no simultaneous multiplayer here. You can also travel to the villages of others but you need their memory card to do so. For such an early game in the Gamecube's life, this was a really nice feature, even with its limitations. Oh, and this game knows when you quit the game or reset the system without saving. It doesn't like that, but I will let you find out how it expresses this. 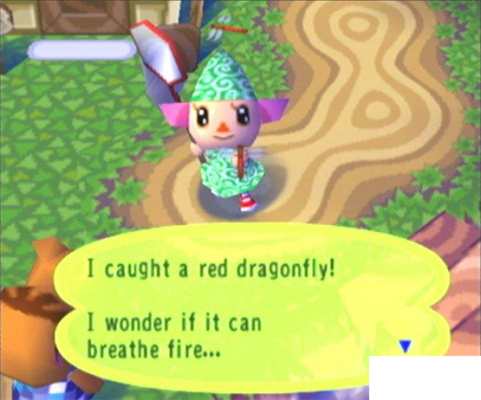 Catching bugs for money, worth it

My only complaint about the game might be the fact that on some days, there just is not much to do. Some days you may hop on to only check in for about 5-10 minutes and you could be done for the day. I remember doing this myself plenty of times. Once night settles in, the stores are closed and at that point there is not much you can do at all. There is no way to accommodate the shops times for your own schedule, which this was solved in the latest entry on 3DS. This makes nighttime kinda boring and empty, kinda like real life in a way. Really, this isn't so much a flaw but more like a victim of the game's own design. Some day's are just completely boring, much like real life. 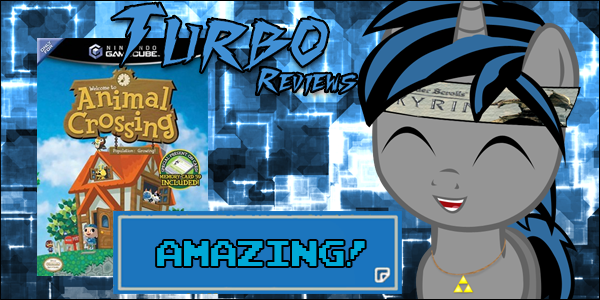 Animal Crossing was a game that, in my opinion, was far ahead of its time. Utilizing real time in such a way was never done before or at least never done this effectively. The game sports a simplistic charm in both its visuals and gameplay and they combine to make something that is addicting and also relaxing. The sheer amount of content and the feeling of progression help to bring you back to the game every day, even if some days are boring with little to do. You will definitely want to hear the wonderful tunes at the very least. It takes a simple approach to gaming that works far more than what many would first think. If you haven't, I suggest giving this game a go. It might not be for everyone, but if it is for you, you will find something wonderful.

+A simple yet addicting premise that works wonders

+The use of real time is fantastic

-Some days are definitely lackluster and won't have you playing much on those days.

Thank you for reading this week's Turbo Review! Anything you want to add? Have you played the game? What are your thoughts?

Be sure to follow this blog if you enjoyed this review and want to be when a new review is posted.