The Eye of Judgment: Legends

Platform: PSP (Available on PS Store for the Vita) 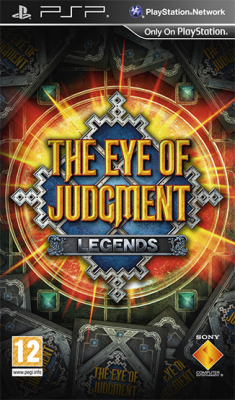 The original Eye of Judgment game on the PS3 was what I would consider an experiment gone wrong. It tried to combine a collectible card game WITH a video game as its battlefield. This sounds like a great idea on paper, but it turned out to be an overly-expensive mess that was difficult to set up and was incredibly easy to cheat thanks images online that can be printed. Later, developer Japan Studio tried to revive this idea with the digital only PSP release Eye of Judgment Legends. While it is an improvement upon its predecessor in many ways, it still shows glaring issues within the card game itself and fails to truly stand with its competition.

As mentioned before, EOJ is a collectible card battle game. Instead of buying real booster packs like the original, this time all of the cards are in the game and can be bought individually with the gold that is earned in game. With these you can make decks with a selection of themes and elements, which play a strategic role. The gameplay overall works like this: There is a 3x3 grid and the first play to control 5 of the 9 spaces wins the match. The way you do this is by summoning creatures to these squares. Each square has an element That does not change game to game and you can use these to help further your board control, as well as spells that can 'flip' these spaces to different elements. The concept of winning here is entirely board control. each turn, the current player gets 2 mana and can save these points up and they are used to pretty much use anything, from spells, to creatures, etc. There is a story mode here (unlike the original), standard battles, and standard multiplayer, though I never played the multiplayer portion. 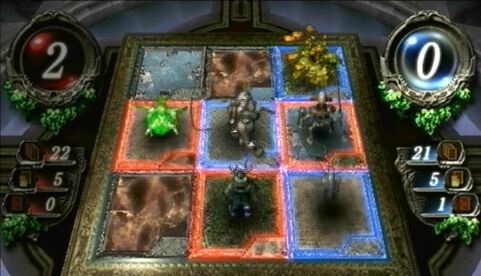 One of the best aspect of Legends is the card shop and deck building itself. While unlocking certain cards can be slow, earning gold is simple and the ability to buy cards directly rather than in random chance boosters greatly speeds up the process of building a deck that suits you. Plus as you progress through the story, you unlock additional cards in the shop, though some of these are kinda hard to tell exactly how they unlock or when. The deck building and card shop aspect is by far the best part to the game. It definitely beats buying real boosters like the original game. Another great thing that is obvious is the lack of real cards. Thanks to this you no longer have to fumble with the PS Eye camera which was very finicky with light. Being able to pick and play feels far more natural for this type of game and that works here.

Another aspect I actually liked was the presentation. While it is not perfect, the game does a pretty good job at displaying information to you though accessing certain commands is a pain, such as ending your turn early. For a PSP game, it manages to look the part of the original game, though without the animations of battle, but this is good as it speeds things a long. This game has a good sense of pick up and play if you have decks made, if you happen to like the battle system itself. 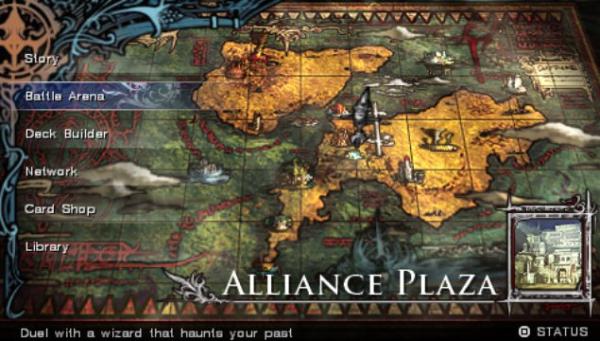 Speaking of the battle system, this is where Legends starts to crumble. While the overall presentation is nice and there is some strategy involved, the overall gameplay of The Eye of Judgement is fairly flawed for a card game. The overall goal is immensely simplistic and there are not too many ways you can alter the flow of battle, so the luck of the draw is very strong here. Since the goal is only for board control, the whole game feels far too restricted in its design and it can be frustrating when the AI gets that lucky creature early on, which it will do that often. This also goes with deck building. While deck building is fun in the process, knowing if you have a decent deck is very difficult and more often than not, it took constant tuning to finally make some of the decks even remotely playable in a competitive standpoint.

Also because of this board control focus, going second has no real benefit unlike other card games. Since you get 2 mana at the beginning of your turn. your opponent will most likely get a creature out on their first turn. Of course it will not be a very powerful creature, but in a game where the point of winning is board control, it can quickly throw things off, especially since there is no accurate way of knowing who will go first. Another huge aspect I found to be very frustrating, are the opponents in the campaign. While I am glad that there is a campaign here, it is designed very sloppily. Not only does the AI feature some very brutal decks, the real problem is with the special abilities that each one has. Each opponent in the campaign has a passive ability that triggers upon certain conditions. You, the player, have no such thing. This was a terrible decision as it makes most of these campaign fights beyond the first one very unfair and frustrating and luck plays a massive role in winning these and at times you are forced to make and use a very specific deck type to defeat some of these broken AI. The abilities should not have been a part of the game or at least you should have a choice in one as well. 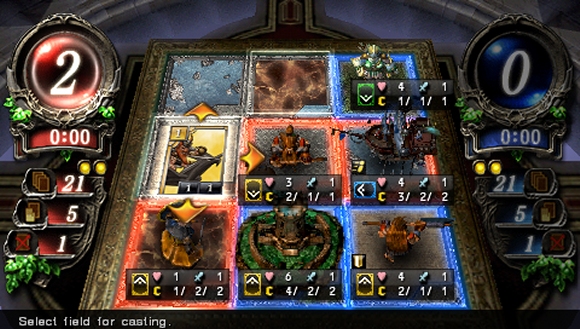 One last thing I will say, the term 'pay-to-win' is a popular term in these types of card games, where the more rare and expensive cards can break the game. This game is no different, as the AI in the campaign has specific Ultra Rare cards that once summoned they can potentially break the entire match. This is a problem when the Ultra's that the AI use are not obtainable by any normal means and that system I still don't understand. This weird AI pay to win nonsense combined with the AI abilities makes the campaign far more frustrating than fun most of the time. 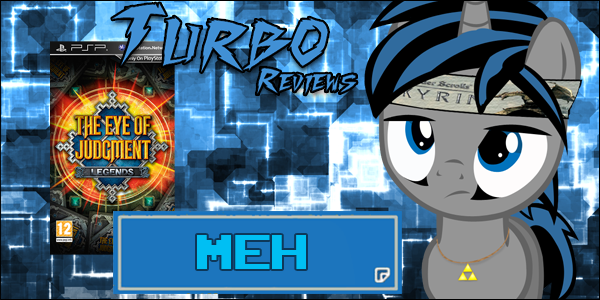 The Eye of Judgment Legends is a step forward from its predecessor but is held back by its limited game mechanics. The great addition of a card shop and deck building are both elements that can make the game fun, but the actual battling is very restricted thanks to its board control focus. Combine this with very frustrating campaign battles and a 'pay-to-win' esque feel to the AI decks, the fun is only in short bursts. The AI abilities are the largest problem and I often wonder why this was even put into the game in this way. The presentation is definitely nice though. The game hits its goal far better than the first and is a good pick up and play game, but as a card battle game, it falls below almost everything else out there.

+Deck building can be fun

+The inclusion of a campaign and the overall presentation

-Nearly broken AI in the campaign

-Unlocking cards is a mystery in itself

Thank you for reading this week's Turbo Review! I hope you all have had a good holiday.

If you enjoyed this review, if you want, you can follow the Turbo Reviews blog itself for notifications on every new review!

It is hard to believe we are at 20 reviews...Never thought I would have this many.