Let's talk about everyone's favorite character in MLP evar... That handsome hunka hunka he-man, with the wicked blue hair and the mad guitar skillz, Twilight's destined future provider of wedded bless and 80 babies and a happily ever after for good measure, that god among men simply known as Flash Sentry.

No, no pictures... his awesomeness is too much for this blog to bear should even his image appear in it. Maybe some of other bigger blogs could handle his radiance, but even then it would be too risky. Best not to try containing such munificent, angelic glory with a simple...

Okay, that joke has outstayed its welcome. Much like another joke, referring to Flash as Brad. I did a little bit of research into his derisive little nickname, and was surprised to find that it started a full month (May 16th 2013) before the movie even came out (June 16th 2013). Now if that is not prejudging a character, I do not know what is. This name is apparently based on the idea that Flash is a jock. He is not. (Well called, people, well called.) He's a rocker.

Now before you dust off the old rope and unfurl the map to the lynching tree, I will state that Flash Sentry is indeed a very flat character. He has no flaws at all, and that's simply unrealistic. It does not make for an intriguing character. Rainbow Rocks, ironically, did LESS with the character than even the feeble attempt of the original Equestria Girls in making him relevant to the plot. He does have some slight relevance... okay, stop tying that noose for now and just hear me out... in the original, since he dated Sunset and is probably wise to her tricks, making it somewhat understandable that he would investigate and prove Twi's innocence. In the sequel, he was put under the sirens' spell and then sidelined, and any bad behaviour he exhibited must be attributed to their mind control, and not to potential character developing flaws of his own. Anti-Flash fans happy yet?

Despite - put that down! - this acknowledged lack of well roundedness, I still find myself liking him, because he does have all those nice guy qualities. Attribute it to whatever lack within me that you will, I simply think I could be friends with the dude. He isn't vain, doesn't mind things being spilled on him, he tries hard, he perseveres despite apparent rejection, he runs into things when he's a little self conscious (which is adorable) and he stands up for what's right.

Now does that make him and his relationship to Twilight something we should support or decry? Do I think the ship is a good one? Brace yourselves, your flabbers may be ghasted... No. I don't. It just doesn't appeal to me, even though I suspect I would say they're not so different as to make it unworkable. Besides, it would be too pedestrian.

Who would I pair Flash up with, if I could? Actually, Sunset Shimmer. Their former relationship is one mystery that I would love to have some more insight into. They dated, and although Flarebutt claims she only did it for popularity, there had to be something about him she liked. After all, he doesn't seem that popular within the school itself, and we only have Sunny's word for it that dating him would have helped her in that regard at all.

In fact, one intriguing tidbit for ol' Flashy is that HE dumped HER. And this was long before Twilight entered the picture. Do none of the anti-Flash fans feel any inkling of curiosity about this fact whatsoever or what it may reveal about Sunny, Flash and their relationship? 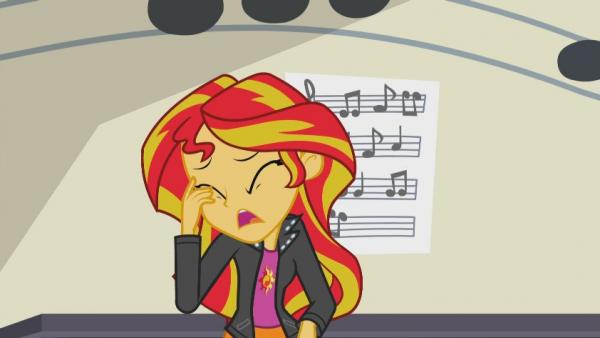 So what would I like to see? A story about Flash and Sunny getting back together, with her now the feisty gal he first was attracted to without any of that nasty, ulterior-motive, set-a-horde-of-teenage-zombies-on-Equestria baggage, and with him now being cut out of actual corrugated cardboard instead of the thin stuff. It should be set after Rainbow Rocks, but with flashbacks (no pun intended, or indeed, called for) to what happened in their former relationship. That would be the minimum.

Naturally, Flash would need to be developed at least a few steps over the course of the story in order to make it more appropriate for him to date the now more fleshed out Sunset Shimmer. It would make Flash less two dimensional, neatly tie up the loose ends, and leave Twilight free to remain in Equestria, being the Princess of Friendship. Everypony wins! Well, as long as I can find a safe place to hide from all the Pro-Sunset-Shimmer-but-anti-Flash-Sentry fans who no doubt will now be after my hide.

Oh, crap, I hear the battering ram already... stay sunny side up!

* Sunny Fox escapes out the window *