Science is now recognizing the significance of so called "butterfly effects". Even small, essentially undetectable variations in the starting state of a deterministic system can lead to vast different outcomes over time as the system states diverge. Essentially, if you can calculate values to a million decimal places, a difference in the million-and-first decimal place will eventually grow and wreck your prediction.

The upshot of this is that even the smallest effects can change the course your life takes.

The usual shorthand is "a butterfly flaps its wings, and <somewhere> gets a drought instead of a flood." I'd prefer to rephrase this as, "a butterfly distracts you for a second, causing you to avoid getting hit by a car you would have been hit by if the butterfly hadn't distracted you."

So, let's replace that butterfly with the entire Equestria Girls franchise. Imagine you are walking home, and come to a red light. Maybe you were musing on the utter failure of the EQG concept to deliver a satisfying movie. Your musing leads you to miss the light changing green. Just as you realize this and are about to step forward, some jerk, driving while talking on a cell phone, sails through the intersection at a great pace, and misses you by mere centimeters. Thus you live when you would have died. Equestria Girls just saved your life. You're welcome.

Now, wait, some of my more astute readers might be thinking. If I accept that the existence of EQG leads to me living when I would have died had it not existed, doesn't it work just as well the other way around? To whit, by the same logic, there have to be people who would have lived, but died because EQG existed.

And to those readers I would say... "Good job! Have a Smartypants, you gold star, you!" 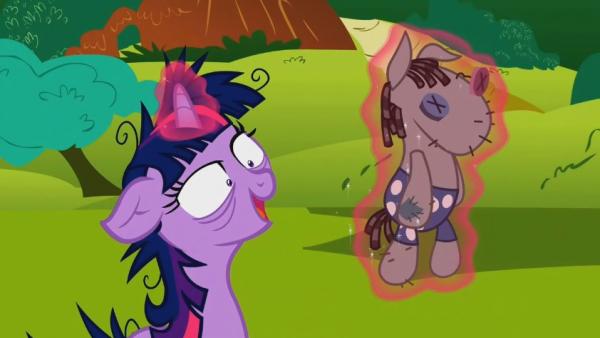 A surprising accurate reflection of my expression at the time of writing this...

But here's the clever bit. Those people aren't really in a position to read this entry. Presumably, they have ceased to be, pining for the fjords; or they have either loftier concerns or more pressing problems to occupy them right now. Only people who are still on this mortal coil thanks to EQG can read this and potentially recognize its applicability to them.

Now the chance that it actually applies to any one reader of my humble little blog is vanishingly small, that is true. However, as the time since EQG came out grows, so more people will be exposed to it. Secondly, the longer this blog entry exists, the more people can potentially read it and can apply it to themselves. So the chance that it will apply to at least one reader approaches 1 the longer time goes on.

The logic is inescapable. Eventually, it will be true of someone who reads this blog entry. It might even be you.

Until next time, stay sunny side up, and look both ways before crossing the street!