Legal Disclaimer in which I will not pretend to be a lawyer.

A few disclaimers before I begin this blog. The first and most important of which is that I forgot to change the cat litter this morning, so if I don’t get home before my wife, I’ll hear it. Secondly, I’m not treating this blog like a wordy, overly verbose, and high minded platform. You can find that all over the internet. You can find that on MLPF. Great minds debating existential topics, and finding depth in the deceptively simple is part of what our site does well. (Hey I work here, what did you expect!). Third, there will be a weird mix of traditional and stream of consciousness in this blog. Sorry, but blogs by their very nature are self indulgent, and I’m doing this thing to have some fun. Also to take over the world, but mostly for fun. Third, there will be a measure of the mundane here. Tread carefully those of you petrified of adult things such as toasters breaking, college shenanigans, work stories, fatherhood, being a husband, and my past. Finally, I will discuss the occasional item of my past here, however I will not reveal my secret identity as Spider-Man!

“Opening a blog with a famous quote may seem like my style, but it just simply isn’t.” ~ Jeric 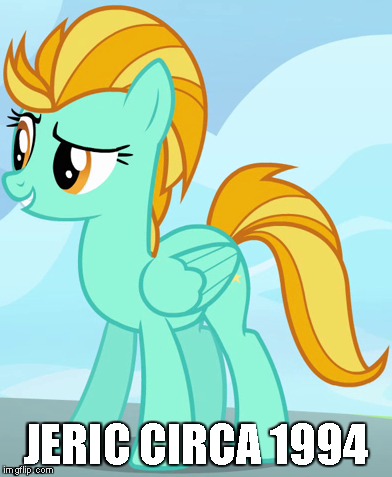 "I Match the banner? Awww Yeah"

I kinda feel like I may have played my hand a bit early with that image. Should I say spoiler alert? Oh yeah, before I move on, while none of these blogs are specific to Ponies, this is a damn My Little Pony message board. If you think I am going to do a whole blog entry without a Pony reference - all of the shame to befall on you! All of it.

So back to Lightning Dust here. Why am I highlighting Lightning and saying I was her back when dinosaurs ruled the theaters and my kind still shed daily tears over Kurt Cobain? Simple. I was kind of a reckless, self absorbed ass back when I was a teen. No I wasn’t a bully or a true paint by numbers prick. My shit certainly did not stink though. I probably had good reason to feel this way, but that is another story for another day. Basically, I was pretty high on myself and my abilities, and that attitude did have a negative impact on a handful of friendships. I was also ambitious beyond what one would expect from a high school student. That focused drive served me well in my academics and extracurricular activities, but I sit here and wonder how close I came to taking a much different path, and how unready I was when I was forced to face uncertainty head on.

For example, when I was in high school (Florida) there was this girl. Cute as a button (no lightwing … just no). This girl had a captivating mix of aspects that I can only describe as sultry yet adorable. Drew Barrymore in a way. She was extremely brilliant! How does a budding asshat like teen Jeric let such a woman know how attractive and intelligent she is? Let’s just say that this girl developed a first impression of me that was unfavorable. Ok ok, she out and out hated me. If not for a mutual friend we both had, she would have never given me the time of day. Eventually we became friends. Looking back I likely didn’t deserve it.

Now, I layed on the self deprecation pretty thick there. Honestly, I was not a complete ass. I had the seeds of the person I would eventually become, but the lack of humility and my personal drive be great at everything I tried really overshadowed my virtues. Anyhoo …

Shortly after High School, I went on a European Trip with my father. Germany, Italy, France, and Ireland. He was retiring early so that he could deal with a few medical issues and …

yeah I should probably warn you now that some of this blog is going to be somewhat real and personal. Depressing even. (I said that in my mind like Snaggletooth!).

Where was I? Ah Germany. So my father, my kid sister, and I do a little trip before I started the whole higher learning dealio at Penn State. That trip was really the beginning of my change. I didn’t realize it at the time, but my father seemed to be treating the trip as a moment to distill all of his wisdom and life advice to myself and my sister. My father was like that. He was more than a father to me … he was my mentor. I wish I knew then what I know now. I would have paid more rapt attention to his advice.

A few months into my initial semester, I got word that my father had passed away. He ended up taking his own life, unable to endure his illness any longer. In the intervening months I found my life at a crossroads of sorts. I was a bit of an emotional mess. My sister was staying my mother in Florida, I no longer felt the drive and desire to continue at PSU, and I had a white hot fury burning inside me. What do you think happens to a man with a highly elevated sense of self worth and a newfound stockpile of bottled rage? Bottled rage goes on the market … to all … whether they want it or not. I lost a friend or two during this time. I truly regret the person I was.

Ms. 'cute as a button’ and I had become close friends. She was in the midst of what I would later call her ‘long winded journey into consciousness’. She was studying behavioral science. What happened next is still a bit of a blur in terms of trying to ascertain what came first and whether it was my idea hers or a mixture, but I transferred colleges. I moved close to the remaining people I cared for deeply. I felt alone for the first time in my life, and absent any real purpose. This was the best damned decision I have ever made in my 38 years of life.

Close to friends and family, I began to heal. I was able to let go of the anger I held onto. I owe a lot of that to that girl who hated my guts. I owe a lot to having the opportunity to be there for my sister. I made new acquaintances and mended old relationships. My personal goals and ambitions didn’t seem to be all that critical to me anymore. Oh they existed, but they were no longer my driving motivation and how I defined myself.

One day, ‘cute as a button’ decided to play her clarinet to help clear her mind. I had never heard her perform once. The piece was roughly about three minutes I guess. It only took 30 seconds into it before I knew that very soon I was going to be proposing to her. But that is a whole ‘nother tale.

So what the heck was the point of all of this? Eh, our lives are always in flux basically. We form much of our personality and identity from age 13 on, but we are always changing. Sometimes subtly and sometimes in ways we would never have expected. Sometimes you are stubborn and it takes an external crisis to reshape who you are and how you see the world. No matter how bleak things get … you can survive. I also say this: we all face moments in our lives when we have to walk through hell. I did, but it is not by my own determination that I came out a better person. I had an amazing friend.

Who am I? Just Jeric - unremarkable me with some remarkable friends.