Season 2 contains some of my favorite episodes in the show. Up there, but no longer at the very top, is the episode I will review today: Lesson Zero. In many ways, it shows its original place as first in Season 2, some of which are explored below.

What the episode is about

On finding out that she’s in danger of missing a (self-imposed) Friendship Report deadline, Twilight desperately tries to find a friend with a problem she can solve, but comes up goose eggs, getting more and more unhinged. Beleaguered assistant Spike goes from concerned to downright anxious as her madness progresses, eventually sending her to see her friends at the picnic they had planned for that day, hoping it will take her mind off the problem. 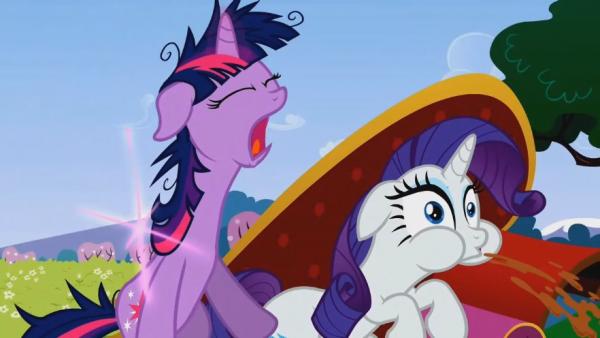 However, her friends are less than solicitous, thinking that she’s overreacting to the situation, and sending her storming off. Things go from bad to worse when she uses an old toy named Smarty Pants and a magic spell (Want-It-Need-It Spell: works every time) to cause a fight between the CMC that she can break up and so have something to report. However, the situation escalates as the entire town gets brainwashed into loving and fighting over the doll.

Running back to her friends, Twilight explains the latest mess she’s gotten them into, just as the sun goes down… and Princess Celestia herself arrives, for the first time in the show actually angry at Twilight. A simple counter spell sets things to rights, and a stern Celestia tells Twilight to meet her in the library. Twilight sadly bids her friends goodbye, certain she’s being sent back to Canterlot as punishment.

As Twilight confronts Celestia, the others come in to defend her, claiming that they were at fault for not taking her concerns seriously. Princess Celestia hears them out, then agrees not to punish Twilight… as long as all six of them agree to send in friendship reports from now on... but only in their own good time. Celestia compliments Spike: he was concerned about Twilight, and asked her for help. As the Mane Six dictate a group letter about the moral of this episode, “always treat your friends’ concerns seriously”, Spike attempts to add his own self-congratulatory note, only to be stalled by a stern glance from Twilight. Everypony laughs!

What the episode gets right

1. The cold open provides a throw away gag, with Twilight’s first item on her To-Do List is to “make a to-do list”. Her grin as she delivers this line makes the moment, as does Spike’s exasperated groan.
2. Speaking of which, Twilight’s own exasperated groans after her friends prove less concerned about things than she is, along with her squeak (Da’oh!) when she realizes Rainbow Dash is about to bomb an old barn of Applejack’s are some of the highlights of the episode for me.
3. The scene in Sugarcube Corner is interesting, showing not only Mrs. Cake’s kindness, but also foreshadowing Twilight’s later neurotic breakdown, where just for a moment her expression changes to this: 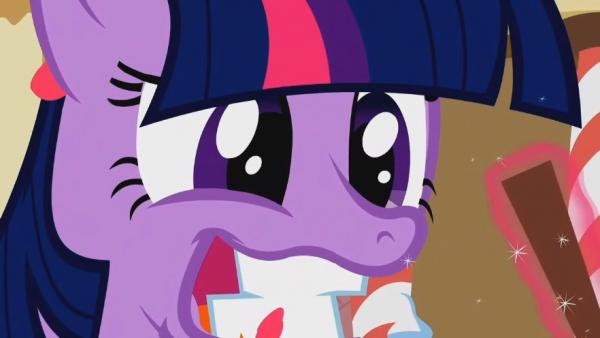 4. There are a lot of visual changes and upgrades, making this the first true Season 2 episode. The glow of a unicorn’s horn and the aura surrounding the object being manipulated is much more pronounced, with a darker colour and an undulating border replacing the vague pink glow of previous episodes. It’s also colour-coded for your convenience: Rarity’s aura is sky blue, Princess Celestia’s aura is a sunny yellow, and Twilight’s aura is reddish pink (Making them Cyan, Yellow and Magenta respectively!

No black magic, yet, though.)
5. While the day starts out with the sun moving normally, as soon as Twilight realizes she might miss a deadline, it starts moving in increments, with an audible ticking sound. Even the windmill moves in time with the sun across the sky. This is an interesting and thematic visual, reinforcing the urgency Twilight feels as time proceeds without pause. Twilight’s mane getting more and more untidy as she slips further into her madness is a great touch. And those expressions…
6. The first half of the episode is Twilight trying to find a friend who needs help. Epic fail after epic fail results. Rarity only lost a ribbon; Rainbow Dash is smashing Applejack’s barn on orders rather than out of anger, and Fluttershy is apparently killing a bear! Lucky it was only a chiropractic/massage session.
7. There’s lot of rule of three in this episode: Twilight’s imagine spots that Spike has to interrupt; Sweetie Belle’s line “I really like her mane…?(!)”; Rarity’s line “Of all the worst things that could happen, this is the worst. Possible. THING!” For both sisters, the final repetition contains some sort of a joke. Sweetie’s third is delivered with as much enthusiasm as the previous two were missing, and Rarity follows hers up with “What? I really mean it this time!” when the others are staring at her after Twilight gets into trouble.
8. And boy, does she ever. Celestia is not pleased to find the entire town in the grip of a mind-altering magic spell. Some have suggested that this is partly due to Twilight messing with pony’s minds right after having Discord do the same, which makes as much sense as anything.
9. The scene of Twilight and Celestia in the library is great, because you can see Spike listening in and holding onto his tail. You might just think he feels bad Twilight is in trouble, but it goes even further… he is the reason she’s getting the dressing down in the first place, and is feeling guilty about it. Luckily, Twilight is happy to hear that he was taking her concerns seriously enough to call on Celestia for help.

What the episode gets wrong

1. Once upon a time, I would not have hesitated to give this episode full marks. Alas, time has made me more jaded. There is a massive, massive problem with this episode: it relies on distorting Twilight’s organized, list-making personality to absurd levels to make the plot work. In this way, it is no different to, and even precedes,The Mysterious Mare Do Well
andSomepony to Watch over Me. It’s one of the methods the writers keep using that I think is really irksome, and to find it in an episode I thought was so good otherwise is a major disappointment. The best episodes are always those where the character’s personality is natural, and the plot develops organically from that. I put Look Before You Sleep (S1) and
Castle Mane-ia (S4) in this category, and those episodes still hold a special place in my heart.
2. Twilight’s deadline is self-imposed… Celestia never mentions a once-every-week aspect to the Friendship Reports. This makes the entire episode seem a little silly when you consider it. Even Spike is confused as to how Twilight came to that conclusion.

1. Okay… now Pinkie Pie is a fourth wall observer, that’s already established. There’s a scene at the picnic, when she uncovers her picnic basket, only to reveal balloons and the basket floats away. Many fans seem to think this is breaking the fourth wall. It isn’t. She is looking at Fluttershy, not at the “camera”, and it’s Fluttershy’s confused expression that she reacts to.
2. At the end of the episode, Celestia shows that the ability to teleport isn’t unique to Twilight. Moreover, she can apparently teleport via the moon… well, I suppose she did spend 1000 years raising it and the sun alone, so that makes sense.

Rarity: “Please tell me I did NOT forget the plates! I did! I totally forgot them!”
Summons a couch to lie on
Rarity: “Why? Why? Whyyyy…? Ugh.”
Notices the others staring at her.
Rarity: “What? You didn’t expect me to lie on the grass, did you?”

What Rarity says about Twilight, after spending the episode freaking out over trivialities.
Rarity: “Ugh, what a drama queen! … Ahem, relatively speaking…”
Her self-conscious smoothing back of her mane as she realizes the hypocrisy in the statement makes this work.

Twilight telefrags the CMC’s beach ball and then: 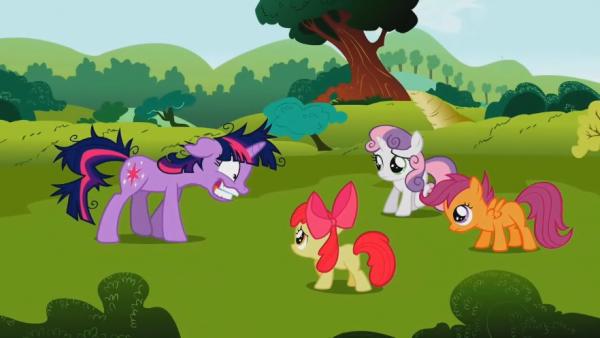 The CMC fighting as hard as they can to NOT play with Smarty Pants, and Scoots waving a hoof by her temple to indicate Twilight’s gone round the bend. 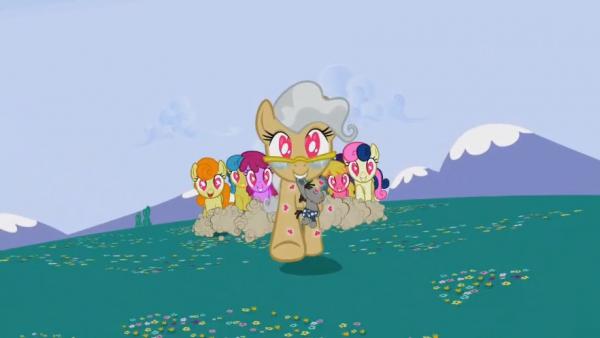 Mayor Mare outpaces the entire field, and is only overtaken by the flying ponies… so much for her being old! 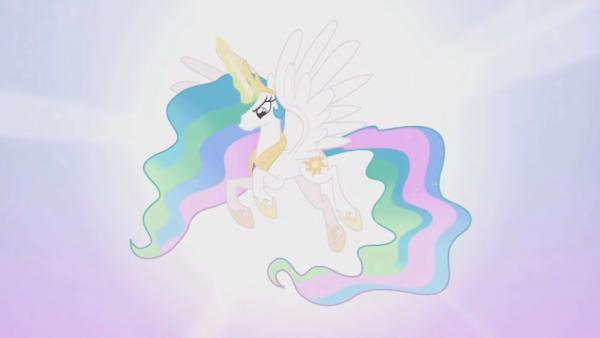 Pros: Makes many changes to the visuals and even to the premise: now it all of the Mane Six who are learning friendship lessons. Comedic episode with great running gags. There are some truly classic lines.

Cons: Twisting the traits of Twilight for the sake of the plot. The whole problem is self-inflicted.

Season 2 reviews are underway. I may be taking a holiday from the site soon (for reasons), but I’ll probably drop in occasionally to update this humble little blog 'o mine. How long can I stay away? Who knows? Who cares?