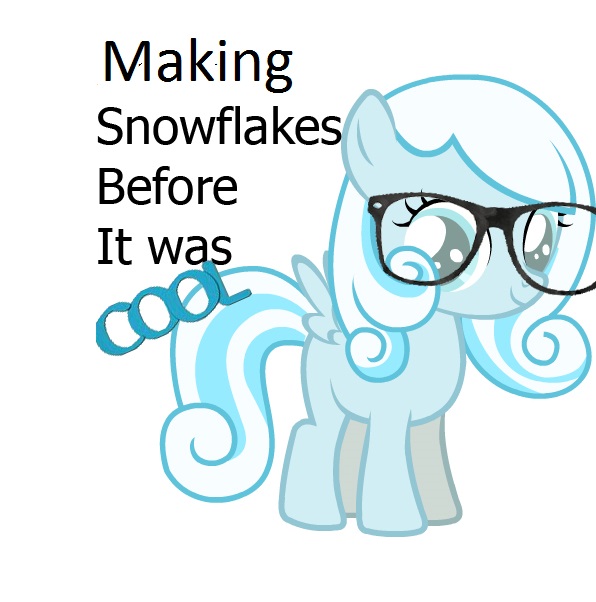 MLP: FIM has the most harmonious and creative fandom that I've ever been a part of. We share our enjoyment of a great show, and we're part of a tremendously active community where new projects are constantly popping up all around us. What with limited time and real-life demands, It's impossible to give all of those stories, songs, and animations the attention they deserve. Sometimes it takes months--even years--for one of them to really sink in.

Which brings me to 'Snowdrop'.

You all probably know about it by now, but it's

by Silly Filly Studios about a pony who discovers her special ability and makes winter a celebrated time of year in Equestria. When it came out on March 21, 2013, bronies raved about it. The animation wasn't as slick as 'Double Rainboom', but it stood out as a stellar project and a touching story that moved many of us to liquid pride. Even if you don't like the main character or SFS, the time and effort they put into this is nothing to sneeze at.

'Snowdrop' did not inspire me very much when it first debuted. I was going through a rough patch at the time: moving to a new place, starting a new job, busy with a podcast, struggling with my writing, and overall I just needed a break from the fandom. I thought the episode was mildly engaging but not exceptional, and after one watch I quickly moved on to the next thing.

This week I came back to 'Snowdrop', and after watching with fresh eyes and a somewhat healthier mindset, my love and respect for that little blue filly has grown exponentially--so much so that I'm going to cap off my journey of rediscovery with a fanfic.

It won't be very long or complicated; however, it will be very different from all the other Snowdrop fics you may have read. The "Luna says goodbye to Snowdrop" plot has been done before in good stories like Snowy Night and Snow Angel. Others ship her with another OC called Nyx, and to date her most popular outing is an ongoing crossover with Frozen. Mine will be an irreverent comedy, as suggested by the working title: ...And It's Freaking Cold Up Here. It's offbeat, it's weird, but with it I will pay my proper respects to this extraordinary character.

I hope you guys will check it out and enjoy. The story comes out on March 21, the 2-year anniversary of 'Snowdrop'. (Time flies, doesn't it?) I would also be thrilled to get your thoughts on the animation! Until then, [lame pun] CHILL. [/lame pun]

I also posted this blog on FIMfiction under the title "Thawing Out 'Snowdrop'".