So, you're probably aware by now that I didn't find Amending Fences quite the magnum opus that many other fans did. Nor did I find much to enjoy in the character of Moon Dancer (Moondancer?), whose emotional struggles strongly resonated with many bronies.

Nor Minuette, for that matter, but in her case, it's more a matter of personal taste. I don't like people (or ponies) who giggle incessantly; that sort of thing annoys me. "C'mon, let's fly! *giggle* Get it?" No, Minuette, because that is not a joke. Twilight can fly, you can only run. Neither of you are fleeing, so "let's fly" really isn't a pun.

But back to Moondancer. I didn't see a shy pony hurt by somepony's thoughtlessness just when she was starting to open up to the world. I saw a pony who is unfairly projecting her own insecurities and feelings onto Twilight, without Twilight even knowing about it.

If she wants to attach expectations to Twilight without so much as making an attempt at cluing her in, then it’s her own fault if Twilight doesn’t meet those expectations. Yet the episode wants to pretend that Twilight is at fault for this. The writers, and even Twilight herself, are too quick to attach blame to Twilight for MD’s own neuroses. Twilight even says at the end “Back when we were in school together, you invited me to a party. I was so focused on my studies that I didn't show up.” Which is a blatant contradiction of what we saw in the pilot and the flashback based on it. (I'll build more of a point on this later.) MD herself never invited Twilight anywhere. Twilight got a backhanded invite from a different pony. MD set up the party for Twilight, but she didn’t actually invite Twilight, and made no effort to ensure that Twilight knew that it was important to her. As far as I can see, Moondancer inflicted all this on herself.

tl;dr: The source of Moondancer's emotion distress is not Twilight's thoughtlessness, as implied; it's Moondancer's own expectations of what amounted to a secret test of friendship that Twilight "failed".

Is my point becoming clear at all?

Leaving all that aside for the moment, the premise of this episode is one that looks really good on paper. Twilight realizes she was a bad friend in the past, and finds out that her behaviour at that time hurt somepony else, who is still suffering because of it, and she apologizes and makes amends (which is what "mending fences" means, so the pun in the episode title also makes little sense.) Great idea! Sign me up! I just think there were a few problems with the execution of that premise. So, in the spirit of being constructively critical rather than just critical, I offer a few suggestions for alternative routes that MA Larson could have taken that would ameliorate said problems. Even if you, dear reader, remain convinced that the episode's "problems" are not such, I would say that no writer is perfect, and so no episode is perfect. There's room for improvement, even if you love the episode with all your heart.

First, I feel the episode hamstrung itself by making the scene in the pilot, where Twilight blows off the invitation to the party, to be the cause of Moondancer taking the psychological blow that the episode focuses on. Why? Because, quite simply, Moondancer was not in that scene. So even if she knew it was organized by Moondancer, Twilight really had no way to know that declining to go would affect Moondancer so badly - at least not without a sense of intuition and empathy for other ponies that she at this point lacks. It's asking her to be aware of something she couldn't have been known, and then punishing her with blame for her justified ignorance.

So how to fix this? You can still leave that scene in and have it work, but if you're going to rewrite the past anyway, why restrict yourself to what we've seen before? Have a flashback to earlier in the day, before Twilight started reading her history book, where she meets with Moondancer, and Moondancer does actually invite her to her party. She could even say "I'd really like you to be there!" Go the whole hog, and have Twilight actually agree to go! Maybe she then tells Spike about it, so he goes to arrange his gift (neatly sealing up a plothole in the pilot, by the way, namely why Spike knows about the party, when it seems Twilight didn't until she was told by Twinkleshine.) Then later, Twilight gets caught up in her reading, runs into the aforementioned trio, and decides her research is more important than the party, leading to her saying they don't have time for presents and parties, even though they're on a break.

Now we have Moondancer actually inviting Twilight herself, and Twilight betraying her trust by going back on her word to attend, which something I would actually agree that Twilight should be blamed for. It's a bit of arc welding that could easily have been introduced, and would fully justify Moondancer's emotional pain.

There are some other issues that could have been fixed with little effort.

1. The scene where Twilight imagines how Moondancer would have reacted to her no show isn't a flashback, and so we have no real way of knowing if that's what really happened or not. I mean, push comes to shove, I'd probably accept it as accurate, but it grates on me that we have an imagine spot rather than a flashback. How to fix this one? Have Minuette describe it as a flashback of her own. She's basically the main mode of exposition elsewhere in the episode, why not here?

2. Leave out the "I don't even remember my friends' names" running gag entirely. It takes up time unnecessarily, quickly becomes exasperating, and goes against both the idea that Twilight considered them her friends in the past and that Moondancer would have attached so much emotional significance to Twilight. In particular, "Twilight Twinkle" is a red herring in the context of the episode.

3. Use the Cutie Map to start the episode off, rather than using Spike's random comment. You don't even need to include a scene of her checking the map, just have her say "the map sent me to Canterlot". (Yes, yes, "show don't tell", but if time is an issue, this could be used instead) Then Twilight arrives, determined to fix somepony's problem, only to find she caused it in the first place. That would seem much more impactful to me, and drive the lesson home to Twilight more naturally than as it stands.

So, those are the tweaks and changes I would have made to this episode. I've tried to justify them as much as I can, and I hope they sound reasonable. If you can think of anything I've missed, or you want to denounce me as a cynical cretin, feel free to comment. 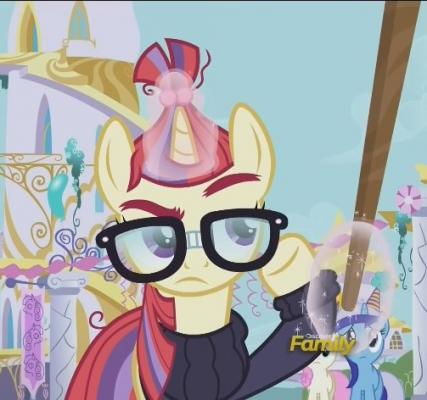