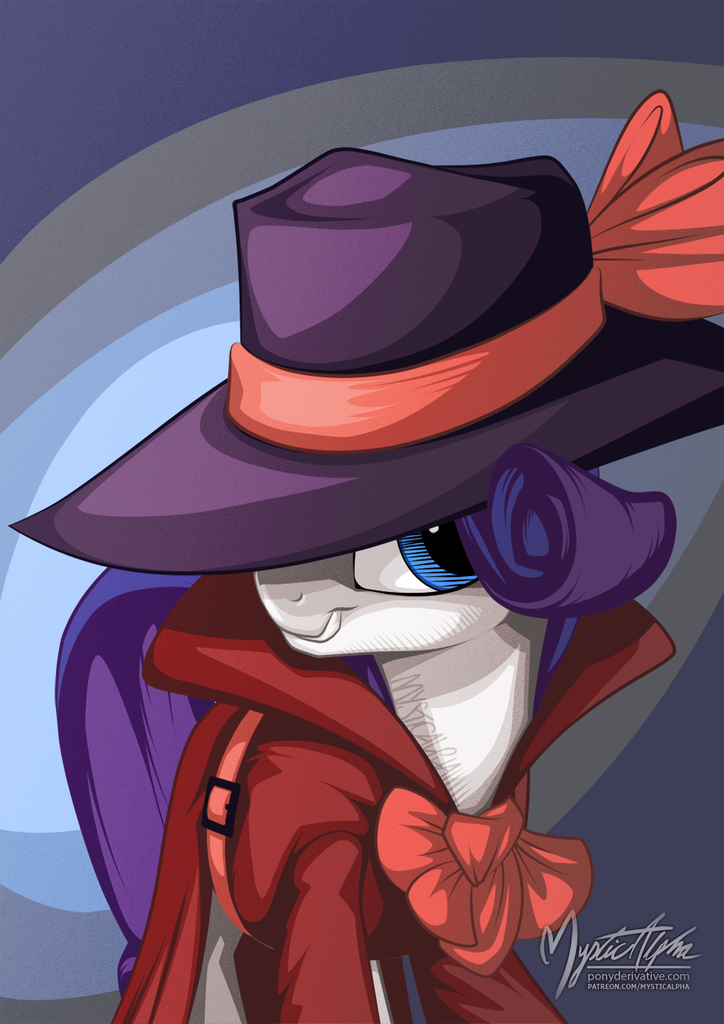 Good morning everypony, welcome back to another edition of "Batbrony Reviews." My my, looky here, we've got ourselves another Rarity episode this morning (and another one after that! Dear Lord, this is simply the season of Rarity, isn't it?!

). And what an episode it was. I have made it no secret in the past that "MMMystery on the Friendship Express" is my all time LEAST FAVORITE episode of MLP; it's incredibly stupid, boring, convoluted, and relies on many main characters acting incredibly stupid and out of character. I hate, hate, HATE IT, and all the more since it came at the tail end of my still favorite season of MLP, Season 2! :okiedokielokie: This episode, "Rarity Investigates," has officially made up for that, by giving us an actual mystery episode that was executed extraordinarily well. Without further ado, let's dive right in and take a look at "Rarity Investigates."

You've been hit by, you've been struck by... A SMOOTH CRIMINAL!

First of all, as with last week's episode, Rarity was spot-on yet again (maybe even more so). This week we really got to see her in her element the entire episode, being simultaneously fabulous but also extremely competent in her own way (which we all know she is). Not only was her changing wardrobe throughout the episode both fabulous and entertaining to watch, but Rarity really tackled this challenge from the start all on her own. It was actually a wonderful display of her generous spirit; she just completely gave of her own time for the sake of her dear friend Rainbow Dash without asking for anything in return, and it's always nice to see her Element being highlighted like that. Not to mention that, unlike in "MMMystery on the Friendship Express," where Pinkie Pie is practically too dumb to breathe and needs Twilight to hold her hoof on everything, Rarity figured everything out all on her own. And she did it because Rarity paying attention to little details in general makes perfect sense for her, it fits right into her fashionista persona and professional life. Heck, it was even highlighted at the beginning of the episode before the investigation even began when she not only took care to make sure her display was arranged perfectly, but also noticed that the rhinestones she got were the wrong kind. Lots of little subtle details like that throughout the episode in highlighting what makes Rarity such a strong character, and I really loved that about it.

Fabulous Gem-Butt Pony: She can make even sunscreen adorable and fabulous 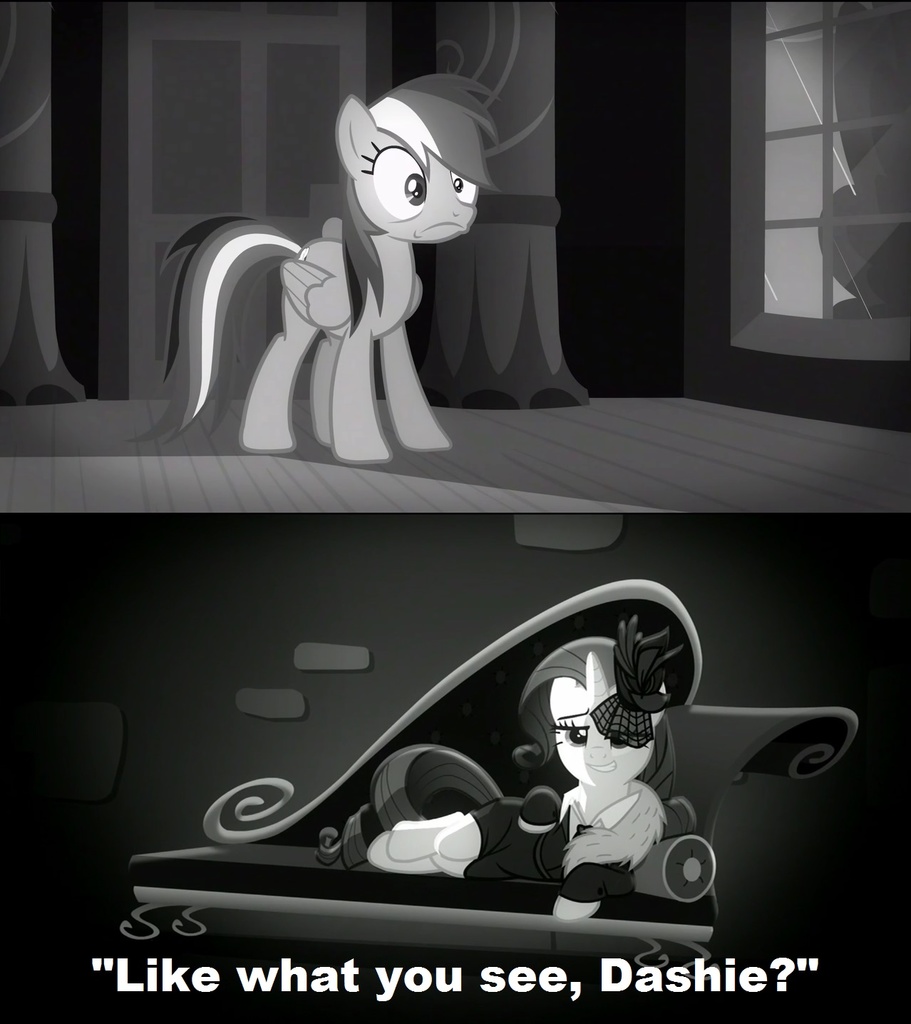 So she was just lugging all her new outfits AND the couch around the entire time? If not for her unicorn magic, I'd call BS

Miss Rarity, I believe you're trying to seduce me

Next, let's look at our deuteragonist here, Rainbow Dash! She was... basically what a deuteragonist in this role had to be. She didn't do a whole lot besides geek out over the Wonderbolts and get impatient with Rarity, but neither of those things were really all that bad. She was cute when she was geeking out and funny when she was getting impatient, and if anything it was kinda nice seeing her not trying to hog the spotlight, both in the episode as a whole, as well as when she selflessly retrieved Spitfire and risked her own shot at performing with the Wonderbolts. Not a whole lot else to say about her besides that, but she had a fine episode, and it's fun seeing her interact with Rarity, albeit probably less whacky than it would've been in, say, Season 1 or 2. But that's a nice quality of Season 5, it goes to show how much these friends trust each other even if they have very different personalities (another good instance of that was when Rarity didn't lose her cool over RD staining her dress, something she most certainly would have done in Season 1).

Rainbow Dash always dances with style! Ha! See what I did there? 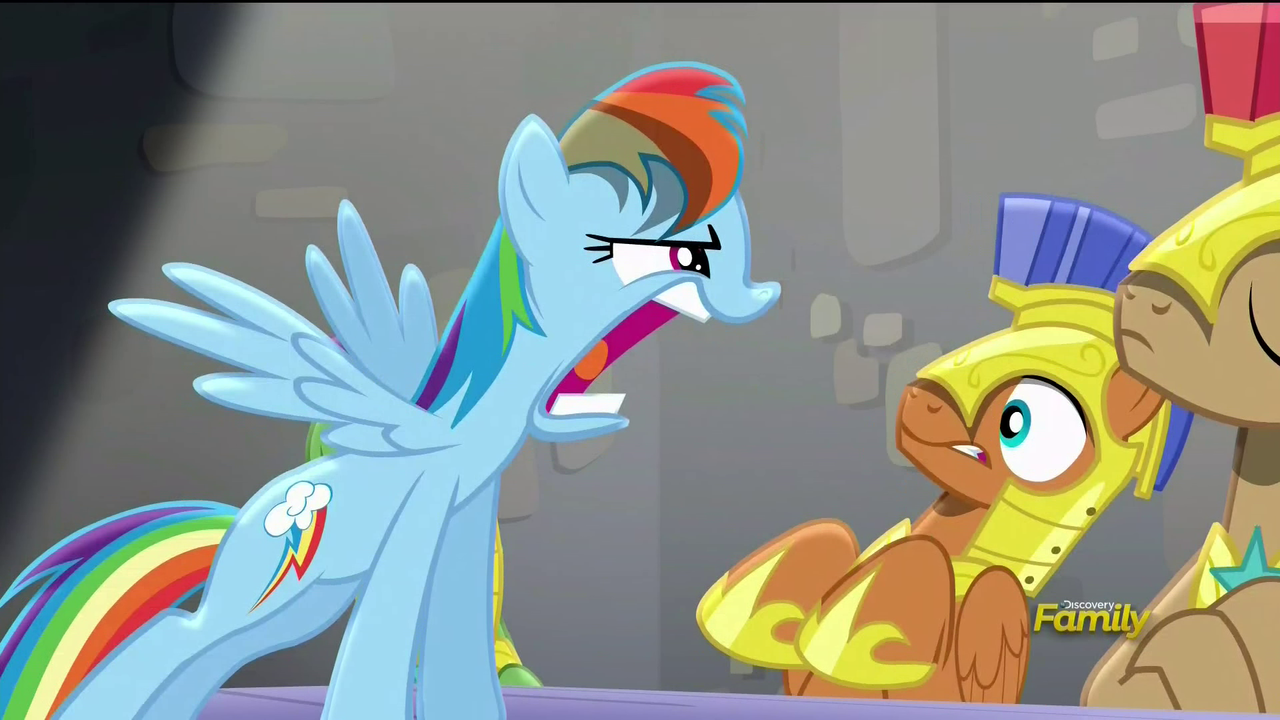 The other characters here were just fine. Wind Rider was kind of obviously trying to set RD up (even though at one point I thought Spitfire herself might've just run off), but he didn't really leave much of an impact overall. It was pretty obvious it'd be him, but we just didn't learn enough about him besides his backstory to really care. So he was just kinda there, not a very memorable antagonist really. The Wonderbolts were just fine, I always like seeing 'em myself; Spitfire and Soarin' are always fun to see, and I didn't think their suspicions of RD were unwarranted or unfair, given that they gave her a chance to prove her innocence after all (and RD certainly wasn't doing herself any favors in her defense). It was very cool getting to meet Spitfire's mom, Solar Flare, I really liked her design and certainly wasn't expecting to meet a character like that. Very nice getting to see Sassy Saddles two weeks in a row as well, as well as the fact that she and Rarity are getting along just fine now (and on top of that the Canterlot Carousel Boutique seems to be doing quite well as well). Finally that trio of Royal Guards was pretty hilarious during that interrogation scene, especially that one guard with his line about counting the bolts in the ceiling. 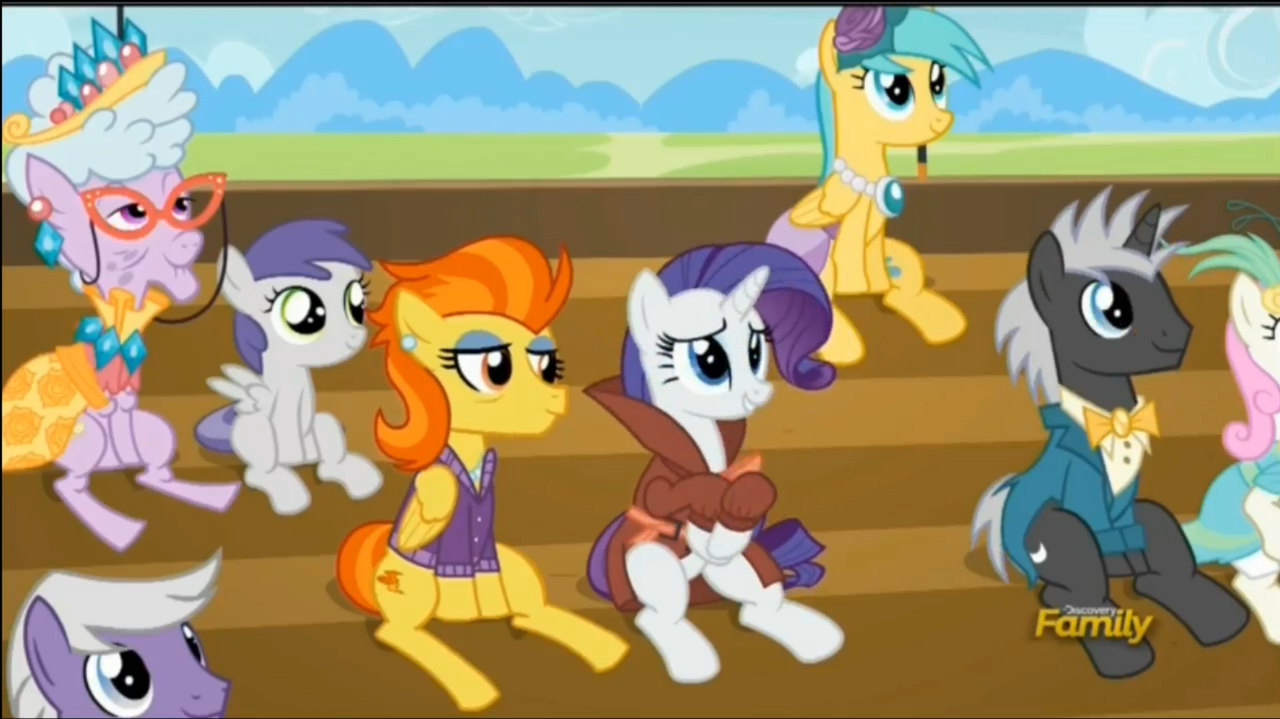 Rarilicious: Making even detective work SUGGESTIVE AS BUCK! Seriously, I'm guessing all three of those guards are glad she can't see under the table

Lastly, I have to of course mention the episode's art-direction and style. Obviously I always love seeing episodes set in Canterlot, it's a great setting and I love getting to see more of that city, just like we did last week. The fact that we also got to see two of the Mane 6 there at an event that Celestia herself was attending, and neither of them were Twilight, is also quite noteworthy I think. It shows that these characters are continuing to grow as adults and, while they're not growing distant from each other, their own real-life responsibilities are taking them further from home, and that's something they're more comfortable with at this point. Finally, the noir style. Oh my, the film noir style. That was simply too fabulous! It just screams Rarity in every sense of the word and fit her character to a T, from the inner monologuing/thinking out loud to herself (even when she didn't realize it

), to the black-and-white cinematic look, to the jazzy music in the background. Loved, loved, LOVED everything about this style, and it's the final element of this episode that really makes it not just perfection as far as a Rarity episode goes, but also solidifies its blowing that wretched "MMMystery on the Friendship Express" out of the water. All in all, yet another lovely Rarity and Season 5 episode, and it looks like we're in store for what could be the best Rarity episode of this season to date next week (helped by the fact that it will include my favorite pair of best friends in the Mane 6, Rarity and Applejack, helping each other!

). See you all next week everypony, when the Rarity shall be tripled!!!