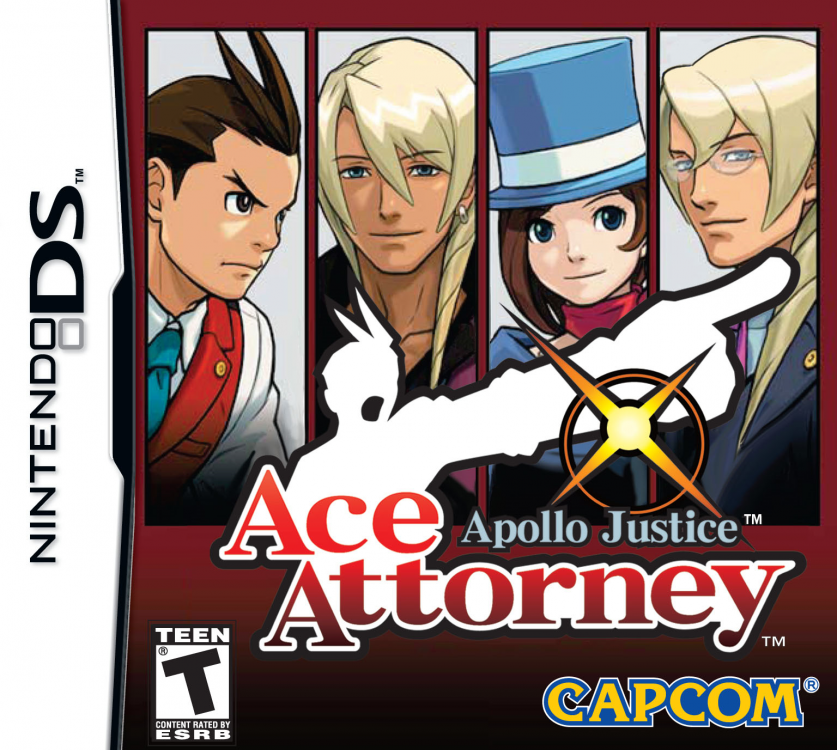 Apollo Justice is the fourth game in the Ace Attorney series and the first game to fully utilize the DS's key features. It is also the first game that takes major risks with the series by breaking away from the first 3 games by giving us both a new main character and almost entirely new cast to interact with. This game takes place 7 years after the events of Trials and Tribulations, and a lot has happened since then. The first case(Turnabout Trump) introduces you to the new main character, Apollo Justice, a new defense attorney working under Kristoph Gavin, a veteran defense attorney, and his first trial is to defend none other than Phoenix Wright himself, who was revolked of his attorney badge 7 years ago for presenting forged evidence(unknowingly). The first case also introduces key characters like the victim Shadi Smith(who's more relevant in the final case) and Trucy Wright, Phoenix's adopted daughter and a prodigy in magic tricks. The second case(Turnabout Corner) involves a stolen noodle cart, a hit-n-run case and panty theft(seriously), all of which eventually become related to a murder, and Apollo must defend the son of a family gang. This case also features the return of Ema Skye, who made her appearance in the extra case in the first game, Rise From the Ashes, though she is much more different from her first appearance, as she's a bit more bitter, especially towards the game's prosecutor. Speaking of which this case also introduces the main prosecutor Klavier Gavin, who's the obvious younger brother of the Defense Attorney Kristoph, as well as a rockstar who leads the rock band "The Gavinners". The third case(Turnabout Serenade) involves a concert featuring Klavier's band, and famous Borginian(fictional country) singer Lamoire(who's more important than this case lets on) and her pianist Machi Toyabe, the latter who eventually becomes the suspect for the murder of his manager. Also despite the terribly slow start, this case gets really good. It also introduces Valant Gramayre, who Trucy refers to as "uncle". The final case(Turnabout Succession) involves the murder of an artist who also turns out to be responsible for a ton of forgeries, and his daughter is accused for poisoning him. This case is eventually linked to the first case as well as the same case 7 years ago where Phoenix loses his badge. The case also allows you to play through that same case where Phoenix defends Zak Gramyare, Trucy's real father as he's accused of the murder of his master, Magnifi. Phoenix's case also features the original courtroom, music from the first game, as well as other familiar faces like Detective Gumshoe, and also appears to be Klavier's first case as a prosecutor. And slowly shows the mastermind behind the whole ordeal. Unsurprisingly this is the best case in the game, though it also introduces one of the worst characters in the series, Spark Bushel(more on him later). The final case also deals with the changes to Law and Court after the forgery debacle, and the final case is an attempt to reform by using a Jurist system.

The game features an almost an entirely new cast of characters, with the returning characters mainly consisting of Phoenix, Gumshoe(albeit in a flashback), and the Judge, as well as a couple of characters like Ema and Officer Meekins(ugh). Surprisingly, Phoenix is a lot different from the original trilogy, as he feels a lot more mature the past 7 years, and works very well as a mentor for Apollo. Apollo himself is a great character, and has enough different to him to keep him from being a copy of Phoenix, with him being a lot more serious and wanting more confidence, and his sarcasm gives him some funny moments(CHORDS OF STEEL). Trucy is easily my favorite new character, her enthusiasm for her magic tricks, her upbeat and adorable behavior and her tendency to look at the bright side, even in the bleakest moments makes her a lovable character. With Ema, at first I found her personality change jarring, but I eventually liked her more as it made her stand out as opposed to being Maya 2.0. I'm more mixed towards Klavier Gavin, as while he's likable, and I enjoy his personal dilemma in the final case, he's probably my least favorite prosecutor, as I didn't find him as interesting as Edgeworth, Franziska or Godot, and I found his rockstar motif kinda lame. On the other hand, this game probably has the best minor cast, as most of the suspects and witnesses are pretty fun, especially Guy Eldoon, Valant Gramyare, Vera Misham and Wocky Kitaki. However one character, Spark Bushel, a guy who's scarily obsessed with getting the 'juicy scoop'(so basically a even worse version of Lotta Hart), is easily the worst character in the game, and ranks up there with Oldbag, Victor Kudo, and most of the Turnabout Big Top cast, as one of the worst series, and has a very punchable face.

*Finally I can say more about the gameply

Most of the gameplay we expect from the series make their return(including Psyche Locks), though there are some new features and changes. Most gameplay that was used in "Rise From the Ashes", such as viewing evidence in 3D, and most of the new gimmicks introduced by Ema such as luminol for blood and checking for fingerprints, make their return. Another includes an X-ray machine, which allows you to look through envelopes for messages without compromising the evidence. Another new mechanic is the "Perceive" mechanic, where Apollo uses a special bracelet(which he got from his mother) which allows him to specifically see witnesses where he can point out odd habits when they show signs of being nervous. This is a neat mechanic, though at times it can be difficult as some signs of nervousness can be either vague and be very difficult to find.

The spritework get a huge upgrade from the original trilogy as the character have several very well-animated sprites and are much more fluid compared to the original 3, and

are very fun to look at. The game is also uses 3D artwork for both it's cutscenes and evidence, which while used in RFtA, it's used to full affect here. The 3D cutscenes can be hit or miss especially regarding the characters, but it makes looking at evidence more interesting. And as usual the backgrounds are great.


Unsurprisingly the sound is the same tired and true sound design we expect from these games, yelling "Objection!" will never get old. Where the soundtrack stands with the rest of the series is up for debate(personally it's above JFA's, but below T&T and almost on par with Ace Attorney), but on it's own it's great, and does have better sound quality compared to the original 3.

The game definitely feels like a new chapter for the series as it does a lot to shake up the series like introducing new gameplay elements and a mostly new cast and main character, while staying true to what the series is best known for. Unfortunately the game hasn't gotten a rerelease, so it's more difficult to find. But if your a fan of the series or have a DS or 3DS(which is Backwards compatible with the DS), and you come across this game, you should definitely give this one a go