A fierce competitor in the now extinct FIA Group C Racing Category, The Mazda 787 solidified Japan's place in France at the 24 Hours of Le Mans. 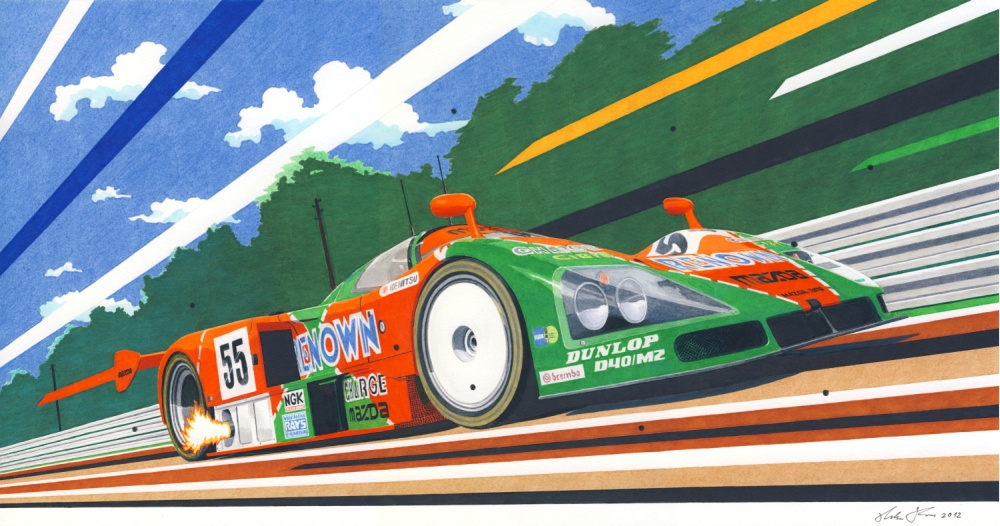 Artists Depiction of the Mazda 787B

Overview and Development: Mazda built the 787 as a successor to the older 767 cars it raced improving the older model in almost every single way. The 767 used the older 13J Wankel Engine which produced almost 600 horsepower. The 787 was given the brand new R26B which produced 900 Horsepower but was limited to 700 due to wear and tear concerns. During the 1991 24 Hours of Le Mans, other competitors were somewhat faster than the 787 on the Sarthe Circuit but all other teams suffered mechanical difficulties much more frequently. The Wankel Engine in Mazda's 787 proved to be the most reliable suffering only minor issues, allowing the car to stay out in the field longer instead of in the garage. For 1991 race Mazda entered 2 racecars and a spare car. One standard 787 and two newer 787B's. Two of the cars were painted in the Traditional blue and white Mazda Race livery. The last car #55 was painted in flamboyant green and orange and featured branding from Renown, a Japanese clothing company that has sponsored Mazdaspeed since the early 80's. This would be the car that won, facing tough competition from Sauber Mercedes and Jaguar, Toyota and Nissan.

​Mazda 787B at Mine Circuit