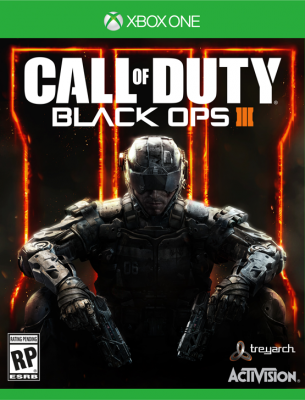 Oh Call of Duty. The FPS cash cow that is being pumped out yearly by Activision to make more and more profits. It seems the series has been on a steady decline over the years, with Ghosts and Advanced Warfare not winning many people over. Many were hoping that Treyarch, the renowned maker of WaW and The Black Ops games, could bring the series back to greatness with Black Ops 3. Well, did they? Gonna be honest here: No, no they did not.

You all know what Call of Duty is at this point. It is a game where you run, you shoot, and that is the general emphasis of the gameplay. The gameplay here is hardly changed, with the only real additions being some of the equipment, scorestreaks and slight changes to movement. Now you have a small boost after you jump! How creative. While the gameplay remains the same, some guns actually do feel like they have some kick and recoil to them, something that has been lost in the past couple of years. Still, if you are tired of the COD formula of gameplay, then you will not be reinvigorated here. The gameplay here is fairly copy and paste. There are new specialists here instead of any kind of character creator. You unlock customization pieces for these characters that hardly make a difference and each character has their own special abilities, but none of these really feel like a drastic addition. I respect Treyarch's decision to try something different, but these characters have one-note personalities and have some of the most generic lines I have ever heard in a video game. It just doesn't add much to the game. 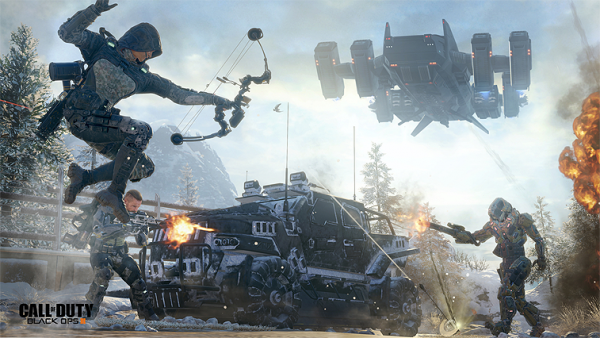 Trust me, the game rarely ever gets this exciting

The game also seems to fumble in the graphics department. Nothing in particular here stands out and in some ways, the game actually looks WORSE than Advanced Warfare, with often muddy looking textures and obviously inferior looking character models. Not a single aspect here looks drastically different than what we have seen before. Even little details, such as your character leaving footprints in snow as they walk, are completely absent, giving a sense of cheapness to the overall experience. The sound quality is overall decent though, with the guns having a nice punch to their sounds, though explosions still sound incredibly weak. Even after 3 years to do it, Treyarch has somehow managed to make a game that, in many ways, looks no better than Black Ops 2 on the Xbox 360, 3 years ago. The game also features tons of reused animations that we seen 6 years ago. Shocking. 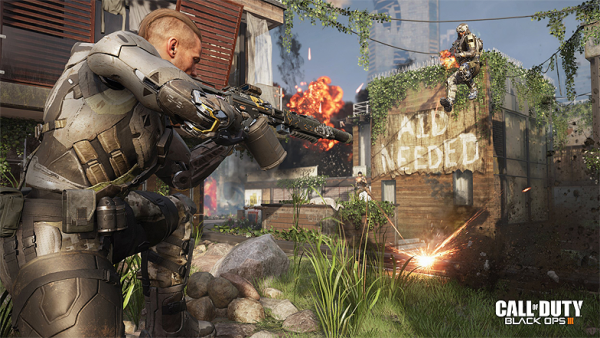 The graphics feel like a step down from last year's game

The game offers 3 made modes of play: Campaign, Multiplayer and zombies, pretty standard fare for Treyarch at this point. The campaign here, is abysmal. While Advanced Warfare had a campaign with a predictable story but pretty decent gameplay and set-pieces, this game has an absolutely laughable story with a plot that makes absolutely no sense and gameplay that gets insanely repetitive very quick. The story here makes little to no sense. Characters are established in about 20-30 seconds time and we apparently are suppose to care about these characters when they die, despite me not even being able to remember their names. There is even a boss fight with a character that I literally had no idea who she was, then I remembered that she was a character in the beginning of the game that got maybe, 25 seconds of screentime before disappearing. Well, she is apparently important to the story now, I guess. The plot even unravels itself towards the end and the last 2-3 hours of the game are nothing but padding and endless shooting, just constant shooting. The campaign and story here are absolutely pathetic and it is a shame that Treyarch clearly has no idea how to write a coherent story. There are some positives to the capmaign, such as being able to customize your loadouts as you please and use weapons of your choosing, but this was in Black Ops 2. The only other majorly worthwhile addition is character ranking, but this feature does not make much of a difference, but I am glad it is here at least. Overall, the campaign here is terrible and it is one of the worst single player campaigns that I have ever played, bar none. 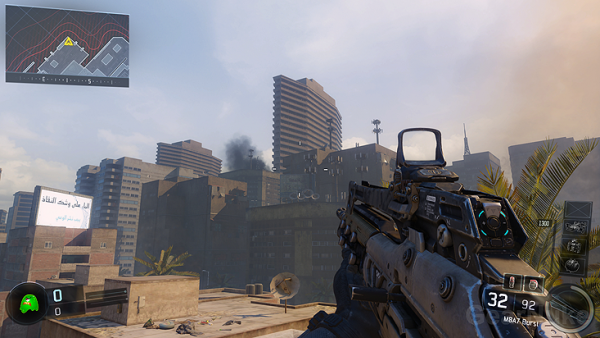 Then there is the zombies mode. That should be awesome right? Zombies was always fun even if it got convoluted at times, right? Well, sadly, zombies is the most disappointing aspect to the entire game. Instead of maybe giving us a few maps to play with or maybe even include some classic maps since they are already made and whatnot, here, we get only one zombies map. That is right, ONE ZOMBIES MAP. To give perspective, Black Ops 1 had TWO zombies maps out of the box and Treyarch had an entire extra year to make this particular game, yet they include less zombie content than Black Ops 1. Fantastic. Now I know some might say "but there are actually two maps, the Giant Zombies map!" Well, no, it is locked behind the $50 season pass so it doesn't count. We only get one map here. Well, is it at least fun?

Sadly, no. This map is a huge disappointment. It's setting is confusing as hell and the game focuses far more on objectives than, you know, killing the ZOMBIES? Whereas past games had some objectives that you had to complete mainly to unlock new areas, this game has you running all over the place, having to pick up this, take it to there, bring this here, do this do that, and soon, killing the zombies becomes a secondary objective and you will find yourself just training a single zombie constantly to complete these pointless objectives. It gets old and tedious and none of the new characters stand out. The zombies here also are very brutal and can kill you with a flurry of hits very quickly, which feels really weird considering the past games. There is a ranking system here as well, but honestly, I got so bored with this mode that I gave up after a while. Now, most of my time in the game is spent on the multiplayer.

So that leaves us with the multipalyer. The multiplayer here, is standard COD fare. You run, you shoot, you die, repeat. As I said before, there are specialists here for the multiplayer, each with their own boring personalities, dialogs and special abilities, but most of these special abilities are boring, non-team focused and if you die right after activating it, you have to let it recharge. None of the maps here stand out either, with no special events that happen or any major advancements there, the maps feel incredibly static, even with an emphasis on multi-layered terrain. Of course there are tons of challenges to complete, tons of levels in the game and a bunch of weapons, but this is all standard fare if you played any of the recent COD titles. You know what you are getting and honestly, it is getting very boring. There are plenty of weapons to use here and that can provide some variety at least, but that is if you are not already bored of the gameplay, which is still mostly the same. 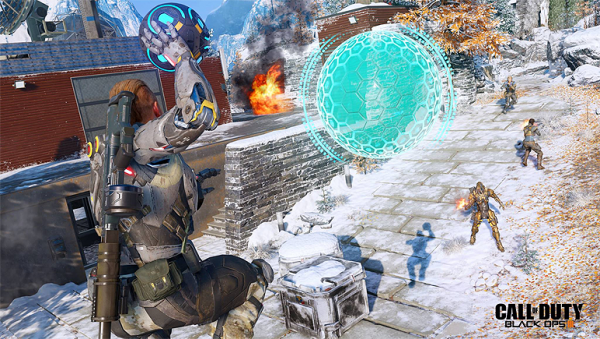 One new feature that is not very new at all, are the supply drops making their way from Advanced Warfare. Here you spend Cryptokeys earned while playing to unlock Supply drops and earn new camos, character animations, player cards and more. while unlocking these things is kinda cool at first, you realize that is makes customization feel fairly meaningless and based on random chance. Not to mention, earning these keys is tedious and slow and just paves the way for the micro-transactions .Yes, this $60 yearly title has both a $50 season pass and micro-transactions. Fantastic, thanks Activision. Even with all of this, there are still no dedicated servers to speak of, resulting in lag and glitches online. 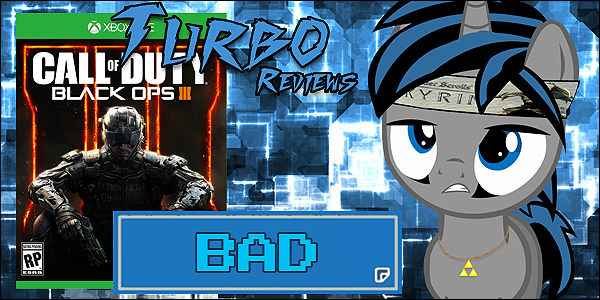 Okay, okay, I may have been bitching a lot here, but let me be clear: I wanted to love this game. Black Ops 3 is a massive disappointment in so many ways and it makes me wish that this series would just die off. While the general, unchanged gameplay can be fun in very short bursts, the mediocre graphics, horrendous campaign and terribly disappointing zombies mode just feels like a slap in the face to all fans of the Black Ops series with this game having less content overall than the previous two entries. This game continues the downhill trend that this series is now on. The addition of yet another worthless $50 season pass, locking content behind that season pass despite it already being made and having micro-transactions, it is just stinging even more to see a series that I once enjoyed slowly die due to corporate greed and developer incompetence. Sorry, but this game, is not good. If you are enjoying it, that's fine, keep at it, but this game is a shell of what it could have been.

+A decent amount of unlockable content in the multipalyer at least

+Ranking systems in all 3 modes

+Sound design for the guns

-The campaign and story are absolutely pathetic

-Graphics are no better than Black Ops 2

-Includes only one zombies map and that map is terrible

-Multiplayer maps are static and uninteresting

And there you have it, one of the biggest disappointments of 2015 for me. Honestly, I am not seeing why some people are praising this game. They say it is better than Ghosts and AW, which in some ways, it is, but that doesn't make it a good game. In any case, thank you all for reading! It is great to be back doing these! ^____^