Rarity is having a wonderful dream which is intruded on by the smell of smoke. Thinking it’s a fire, she wakes up and tumbles downstairs… only to find that her sister Sweetie Belle is the culprit. The smoke is an intended “breakfast in bed” burning. An annoyed Rarity is about to give her sister a piece of her mind when her parents surprise her with a cheery morning greeting. It turns out, they’re going on holiday, and leaving Rarity to look after Sweetie for an entire week.

After the parents leave, Rarity suggests they clean up the kitchen and prepare an actual edible breakfast. However, Rarity being Rarity, she ends up doing everything herself, to which Sweetie protests. Rarity reluctantly allows her to garnish the finished breakfast, but even that comes with overbearing oversight and demands that it be carried out perfectly. The tension between the sisters continues to rise as Sweetie tries to be helpful, but only ends up messing up something – she washes Rarity’s one of a kind sweater, shrinking it; uses up her stock of rare baby blue sapphires to draw a picture of the two of them, forcing Rarity to go find more; and worst of all, tidies up Rarity’s Inspiration Room, which only serves to disrupt her creation process. Rarity only just manages to push down her anger, but states that she needs a little alone time.

A dejected Sweetie Belle goes for a walk, bumping into Apple Bloom, who listens to her tale of woe. Trying to be helpful, Apple Bloom suggests that Sweetie ask Rarity to join her for the titular Sisterhooves Social, an annual event held at Sweet Apple Acres in which sister teams can compete. Sweetie’s enthusiasm is swiftly dashed, as Rarity tells her that “playing games in the dirt” is simply uncouth. Angry that Rarity is so unwilling to do anything except on her own terms, Sweetie decides that she’s going to disown Rarity as her sister. In the heat of the argument, Rarity is only too happy to agree to these terms, and the two part ways.

Sweetie ends up being consoled by the Apple sisters, and they show her how they work together at almost everything. As Sweetie remarks, it’s like they’re just one pony. Even when it seems like AJ is going to get angry on account of AB splashing her with crushed grapes, it ends with just a playful tussle, much to her relief.

Meanwhile, back at her boutique, Rarity finds that the previous disasters Sweetie caused all seem to have unanticipated benefits: the shrunken sweater is perfectly sized for Opal Wopal, and her newly neatly organized Inspiration Room ends up giving her an idea for another line of clothes: “Full Spectrum Fashions”… 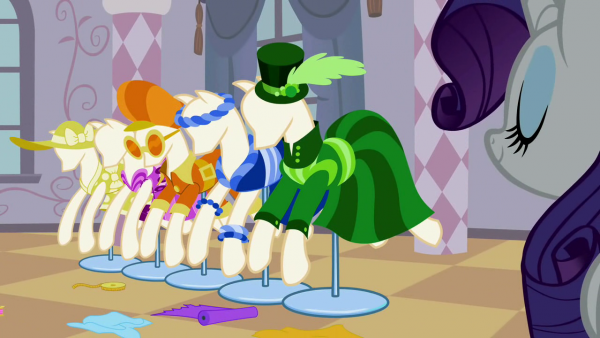 Hey! I should sue!

Although Rarity tries to rationalize away the good fortune so as to maintain her indignation, she finally comes across the picture that Sweetie drew of the two of them, showing that she really does love Rarity and appreciates the fact they are sisters. Overcome with remorse for her earlier behavior, and wanting to make things right and get her sister back, she heads out to find Sweetie so they can make up.

When she does find Sweetie later that evening, who is having a camp out with the Apple sisters, her attempt at patching things up is quickly scuppered by her own inability to realize that she still wants everything, even the reconciliation, to happen her way, and Sweetie quickly rebuffs her, deciding to adopt AJ as new big sister… to the consternation of everypony else.

Rarity is understandably put out by her failure to return to her sister’s good graces, but AJ finally makes her understand that being sisters requires a give and take, and that Rarity is failing because she is not willing to compromise. Rarity comes to a decision…

The following day is the day of the Sisterhooves Social. Sweetie sadly wishes the Apples luck, but perks up immensely when Apple Bloom steps aside to allow Sweetie to be AJ’s sister for the day… and she means one day. As they come to the first obstacle, a mud pit, AJ falls in and re-emerges covered in mud. (SPOILER! ALERT: It’s actually Rarity, as one could see with a closer look at “Applejack”.)

The eyes have it…

Working together, the two manage to come within a gnat’s wing of victory, but ultimately get second place. Her spirits not dampened in the slightest, Sweetie Belle gives a big thank you hug to “Applejack”, knocking off her hat and revealing a unicorn horn. Rarity quickly shakes the rest of the mud off, and Sweetie realizes that the Apple sisters were in on the plan too. Given proof that Rarity really is able to put her own wishes aside in favour of doing something nice for her little sister, Sweetie Belle forgives Rarity and readopts her as sister. Rarity suggests they celebrate: with a trip to the spa. She’s quite serious about it, too. Fortunately, despite the spa joke and final semi-disagreement, Rarity really has learned her lesson, and is now willing to compromise with Sweetie… even if it does involve getting a little a lot just the right amount of dirty on occasion.

Thoughts on the Episode
While the basis of the episode is Rarity being selfish in her relationship with her sister, it’s not too much of an out of character thing for her. Rarity likes things to be organized, or not, the way she likes it in her own home, which is fair enough. I know from experience that sometimes an older sibling might be slightly less willing to do things that they would do without hesitation for their friends, in a “darkest under the lighthouse” kind of way.

Both sides have a point here; Sweetie is driven by nothing but affection for her older sister and a desire to help her out, but good intentions don’t always equal good results. On the other hand, a sibling relationship does require a certain amount of compromise, and Rarity was at fault for not being willing to do that. The good part is that she does learn her lesson, and it stays learned. In a series that quite frequently has characters forget previous morals and lessons and so have to relearn them, this is quite the refreshing aversion, as we’ll see in some of the later episodes.

Praise should also be given to both Applejack and Apple Bloom for not only behaving like sisters should behave to each other, but also AB being willing to relinquish her “sister rights” and a chance at competing in the Sisterhooves Social, and AJ for her sensible wisdom and wholesome advice. We have seen in previous and following episodes that that relationship is not always as perfect as presented here, but that’s an understandable move on the part of the writers, to contrast the one-sided relationship that Rarity and Sweetie have at first with a more equal partnership, as the Apple siblings represent.

There was some decent humour in this episode, even if it wasn’t a laugh riot. The jump cut with Sweetie confidently predicting that Rarity will love the idea of the Social, to Rarity disparaging it is classic. The voice acting is great, with Rarity’s declaration of intent to get back her sister and Sweetie’s pretty spot on impersonations of her sister being fussy being highlights. Oh, and two words: “One. Day.”

It’s interesting to see the contrast between Rarity and the rest of her family. Her parents, while seeming like good ponies, are nothing like their refined and elegant daughter, and it’s pretty clear that Sweetie takes after her folks much more than Rares does… especially the cooking skills. Rarity points out the burnt juice, but personally, I find it more impressive (for a certain value of “impressive”) that Sweetie is able to melt toast.

There is really very little to criticize in this episode.

Highlights/Quotes
That previously mentioned cut:
Sweetie Belle: That sounds like the perfect way for us to hang out! Rarity will think it's an excellent idea.
<CUT>
Rarity: What a ridiculous idea.

This epic fail at persuasion:
Sweetie Belle: Hm. You want to me to go home with you, so that we can do what YOU want to do?
Rarity: Um… yes?
Sweetie Belle: Just forget it!

She may be willing to lend out her sister, but not for very long:
Applejack: Sisters for a day!
Sweetie Belle: No way!
Apple Bloom: One. Day.
<A little later>
Apple Bloom (poking Sweetie): One. Day. Good luck!

Any example of Squeaky Belle, really. 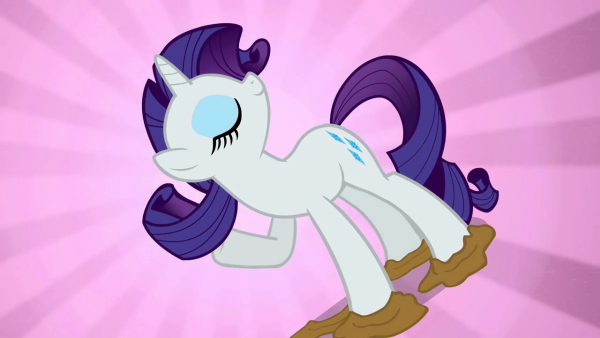 Even mud knows better than to dare stain Rarity... her fans can be a little protective!

Pros: A good moral that sticks; some fine voice acting; AB and AJ are great here; some chuckles to be had.
Cons: Nothing really worth marking the episode down on.