OK, sorry I'm a bit late to the party everypony, I just needed to absorb and process how amazing that episode was. Welcome back to another edition of "Batbrony Reviews". Today's episode is what I would describe as quintessential MLP; something that captured everything we love about the show to begin with while also doing something new (surprisingly considering this holiday, and the story they recycled, are both very well-established). It also highlighted what I love about Starlight's addition to the main cast this season, namely the fact that her presence gives them the opportunity to retread old stories or themes while making them still seem fresh and new since, obviously, she has not participated in most of the Mane 6's adventures in the past and still has a lot to learn about friendship. Without further ado, let's dive into "A Hearth's Warming Tale".

So let's get this out of the way first: the only bad thing about this episode, the single worst thing about it, is the fact that it released in the middle of May. That's about as hilarious and ridiculous timing for a Christmas-themed episode as you can get, and it's completely unseasonal in every sense of the word. It's not a big deal in the slightest, it's just funny is all.

That out of the way, let's begin. So the story is essentially MLP's take on Charles Dickens' "A Christmas Carol" with some minor elements of "How the Grinch Stole Christmas" thrown in there. It's Hearth's Warming Eve (yet again, man this show is getting inconsistent with the seasons, I cannot keep track of how they work in Equestria at this point), and everypony in Ponyville is loving it. Everypony, that is, except Starlight Glimmer. Turns out she's grown to not see the big deal in Hearth's Warming. She doesn't think most ponies care about its origins and that the stuff they really care about is superficial, so to fix that, Twilight sets out to tell her her favorite Hearth's Warming story, "A Hearth's Warming Tale".

We've seen this setup for Christmas episodes in A LOT of shows, but as so often happens in MLP with similar setups like this, what made this stand out was how fantastically everything was executed. First and foremost, the fact that Twilight approaches this problem by reading Starlight a story is perfect for her! The show likes to remind us a lot that Twilight is an egghead, but usually for jokes or just to begin solving problems. An entire episode is rarely covered by her love of reading, so it's nice to see her channeling her bookishness so positively throughout an entire episode. The other way it surpasses other shows that have done a similar setup before is how it conveys the themes. There's a lot of parallels you can draw between Starlight's concern that ponies don't really care about the origins of Hearth's Warming and just stuff like presents and parties instead and both Christmas media and people in real life who fear that it's just a superficial, materialistic holiday these days where people don't really care about the more religious aspects of it. A lot of Christmas media take this approach, but the difference is what conclusion they come to and how they get there. In some cases you have people try to get people to abandon the materialistic aspects altogether and wholesale go back to the spiritual roots; it's rare, but sometimes happens, and those can be done well, but oftentimes aren't. The best example of this I can think of is "A Charlie Brown Christmas," which almost entirely foregoes any materialistic aspects of the holiday in favor for a very somber message. More commonly you have the compromise approach; someone tries to show how the materialistic and spiritual sides of the holiday can complement each other and are both equally important. This can be executed very well, or horribly. An example of doing it well would probably be "How the Grinch Stole Christmas"; conversely, a horrible way to do it is in Kirk Cameron's wretched and dreadful "Saving Christmas".

What makes this stand out is that it's super rare that a 22 minute television episode could cover these themes as well as MLP does here. In an episode which includes setup and a conclusion before the actual meat of the episode, we get a wonderful message about how presents, parties, and celebrations with friends and family can, when approached correctly, embody as much of the spirit of a Christmas-like holiday as understanding its roots and celebrating those as well. Neither aspect is thrown under the bus; Hearth's Warming's origins are just as important as what holiday it has become, so long as they're about the celebration first and foremost. The celebration of the holiday is what's most important, embodying all the good of where it comes from and what it's led to. This is as nuanced a message as a full-length Christmas movie could be which convinces an audience that the good to be found in giving presents at Christmas is just as much what Christmas is about as celebrating the birth of Christ, as long as both come from the same place. It also works perfectly for MLP's setting considering friendship and community, we know by this point, are quite possibly the most central aspect of the most powerful magic in Equestria. Overall, it was just a wonderful handling of tried and true themes, made all the more impressive by the short amount of time they had to cover them all, and MLP writing at its best.

A huge part of how they were able to execute this episode and deliver its message so well was the fact that it was a musical episode, and a delightful one at that. First of all, it's about time we got a musical Hearth's Warming Eve episode, not just with one song thrown in at the end. All of the songs did a great job of telling the story, capturing the spirit of the holiday, and just bringing the episode to life. This is Daniel Ingram at his best, and my goodness it was delightful to see him get to make music for a holiday episode finally. It also helps that they chose some of the characters with the best singing voices to carry these songs. The opening ensemble in Ponyville was fantastic, Starlight Glimmer's Snowfall Frost had yet another great villain song, Ashleigh Ball proved yet again (in my personal favorite song of the episode) that Applejack has possibly the most underrated, gorgeous singing voice on the show in her delightfully simple and nostalgia-inducing number as the Spirit of Hearth's Warming Past, Pinkie had a surprisingly touching but still incredibly bouncy number as the Spirit of Hearth's Warming Presents (HA), and Luna came out of bucking nowhere as the Spirit of Hearth's Warmings Yet to Come and, in her first number since "You'll Play Your Part" since Season 4 (and first solo ever) absolutely KILLED IT!!! Finally, the episode ended on a lovely ensemble with all the ponies celebrating. Through and through, each number was delightful and thematically seemed to cover different aspects of the holiday season, making for an excellent way to convey the episode's message and themes. The tunes themselves did not just tell the story, they told the themes, and that's quite impressive if you ask me. By far one of the most impressive musical achievements on the show in some time, I loved every minute of the music in this episode and once again have to tip my cap to the always phenomenal Daniel Ingram on an incredible job well-done.

I was particularly fond of this number, but they were all phenomenal in their own ways 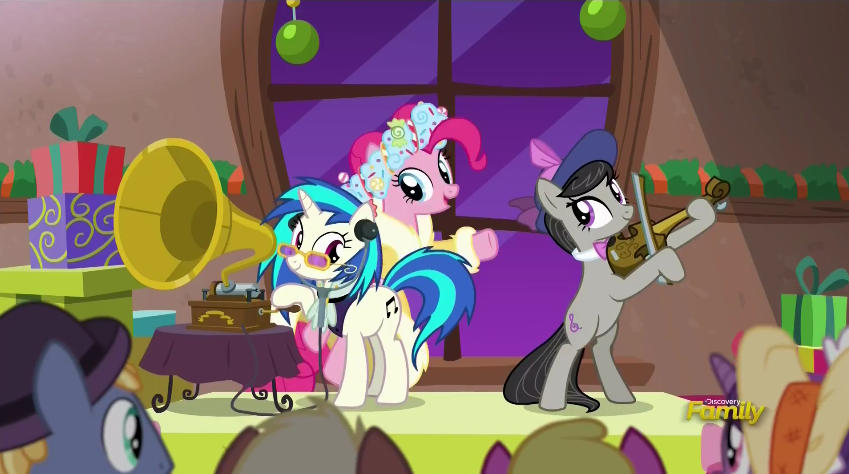 Dang, Luna got HUGE! You been working out girl?

Besides those two big points, there's not too much more to cover. It was "A Christmas Carol" MLP-style, so no reason to go over the story really, they just updated it in a few ways for the purposes of the setting. The fact that main characters yet again assumed the roles of these story characters was a nice callback to the first Hearth's Warming episode where they staged the pageant in Canterlot together. Twilight was adorable as she told the story, especially when it was suggested that she was actually singing the song numbers as she read. I would have liked to see a bit more of Starlight's reactions as the story went on, but that's forgivable considering they could only fit so much into one episode.

The animation was probably the most gorgeous we've ever had for a Hearth's Warming episode; we've never seen Ponyville celebrating it, and it did not disappoint, the whole town and Twilight's castle simply came to life entirely as they should for this celebration, not to mention the animators also got to play around with lovely 19th century Victorian-style animation for the "A Hearth's Warming Tale" setting in old Canterlot and other surrounding towns. That Snape-pony was kind of hilarious (seriously, who else could they possibly be referencing with that guy?), and I seriously couldn't get enough of that older setting, especially the outfits! Holy cheese, those outfits were amazing!!! My personal favorite was Applejack's and Rarity's, and for the former that's quite a testament to how great the design and animation were considering AJ was pretty much one color palette in her whole design. It just had this simple elegance to it as so many other dresses AJ has worn have had, and showed once again why I adore little things like that with her character when they just tweak her ever so slightly and have her step outside of her comfort zone and adorn things she normally wouldn't.

Finally, I'd be remiss if I didn't mention the background ponies. In the both the present and story-setting we got to see some of our favorite familiar faces from around Ponyville (I was especially pleased to see Blossomforth and Cloud Kicker get some nice screen time, those two sometimes get overlooked), and it was loads of fun getting to see all of Ponyville celebrating the holiday. My personal favorite of course (because I'm me) was Derpy becoming the best Hearth's Warming Eve star EVER, but nearly all of the major background ponies got some sort of fun appearance, and you can tell that the animators had a lot of fun playing around with them on this one. Overall, as I said earlier, this was about as quintessential MLP as we can get: it had a great message, story, pacing, animation, music, humor, and just great everything in general. It's possibly my favorite Hearth's Warming episode they've done to date, though I'll have to think about that carefully considering the Season 2 one is pretty darn amazing in its own right. If you haven't seen it yet, check it out as soon as you can; as for me, I can't wait to see it a second time as soon as possible. That's all I got for ya'll today, everypony. Until next week, this is Batbrony signing out. I'm off! *cue dramatic exit*