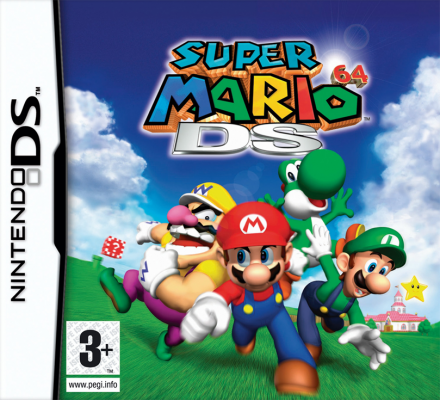 Super Mario 64. A game that is legendary in the world of gaming for revolutionizing 3D games as whole. This game has an immense legacy and is cemented into the minds of many gamers. Then, nearly 10 years later, in 2005, Nintendo decided to remake the classic title for their new Nintendo DS system. What?! I was definitely surprised by this but I picked it up immediately. How well did that go?

Super Mario 64 DS, is, of course, a remake of the original game on the 64. You run, jump, collect coins and stars to fight Bowser among other bosses to ultimately save Princess Peach and her castle. You all probably know this by now and for the most part, that is unchanged here, though there are many new additions that make this feel like a remake rather than a port. 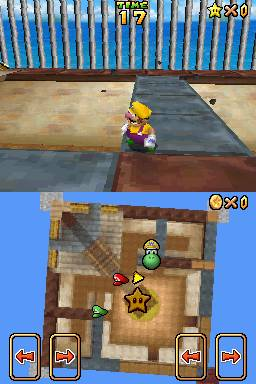 First off, the controls. Arguably the most important part to any platformer. The controls are not exactly how they were on the 64, potentially to the dismay of some fans. Instead of adjusting your movement speed with precise tilts of an analog stick, here, you have to use the D-pad and without the precise controls, how can you control your speed? Well, here is what they did: When you move normally, you just walk or jog, to run in a full sprint, you must hold down the Y button, sort of like the original Mario titles. At first, this does feel awkward and it takes some time to get accustomed to such a drastic change and at times, it can be really finicky and cumbersome. Once you get used to it, it does indeed work fairly well, but even then, it still feels like the accuracy from the 64 original was lost in transition to the D-pad. It just is not as smooth. 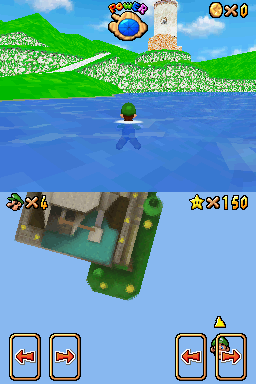 One thing that does make a better transition though, are the graphics. The graphics here have been given somewhat of an overhaul. The graphical look of the original is intact, but it has been cleaned up quite a bit here. The textures now look more solid and less grainy and many enemies and characters have been completely redone and no longer have a jagged or blocky look to them, It makes the entire game look far more clean and appealing as a result and it is incredibly well done in that aspect and I commend Nintendo for pulling this off. The game looks really good for a handheld system at the time and it blew me away. Even all of the characters that you play as look wonderful. Speaking of... 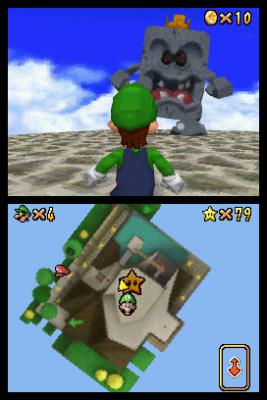 Another huge addition to this release are the new characters. Instead of just playing as Mario, you now can play as Yoshi, Luigi and Wario as well! You don't even start as Mario but rather Yoshi, you rescue Mario a bit later, as well as the other characters. These characters have their own special abilities and certain stars have to be obtained with these characters because of their abilities. This addition is something I really like, though there are some problems. While there are Caps lying around that will let you become a character of the hat that is there, having to switch characters to get certain stars can be a bit annoying. Also, some characters are just not as useful as Mario. Mario is the only one that can properly wall jump and that is one of the most useful abilities in the game. Without it, the other characters are not as agile. Luigi can float in the air for a bit, but that is just not too useful. On top of that, the ability caps are now replaced by Flowers. These flowers contain certain abilities for each character, such as the invisibility for Luigi or the Metal power for Wario, instead of Mario being able to do all of the abilities himself. This to me just seems unnecessary as it now adds another whole step to getting stars that we could normally get in the original game. Overall though, I do like the addition of the characters as they add even more variety to the overall gameplay.

On top of all of this, there are now 40 additional stars to collect and now mini-games to play, which you acquire these buy collecting keys that the rabbits have. The rabbits are back and instead now hold keys which give you these mini-games, each character has a specific overall theme. These games make use of the touch screen fairly well and are a lovely addition. It just adds more and more content to this great package. 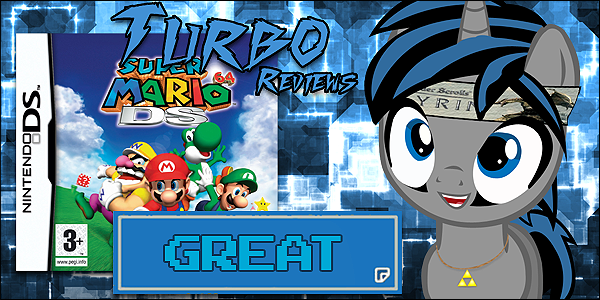 Super Mario 64 DS is definitely one of the better remakes out there. It's graphical improvements and additional content and characters really makes this feel like a labor of love from Nintendo. The controls take considerable time to get the hang of and with the sometimes wonky camera, it can be cumbersome, so the transition is not entirely perfect. Some of the playable characters pail in comparison to Mario as well. Still, they add variety and with an additional 40 stars to collect and mini-games, the content here is astounding for a handheld game from 2005. If you have not played this version yet, I do highly recommend doing so as it is still great fun.

-Controls can be cumbersome

-Mario is the superior character of the 4, making the others less useful

-Power-ups are now specific to each character

Thank you for reading! ^___^ This is a very fun release and it is a game I have recently started playing again.