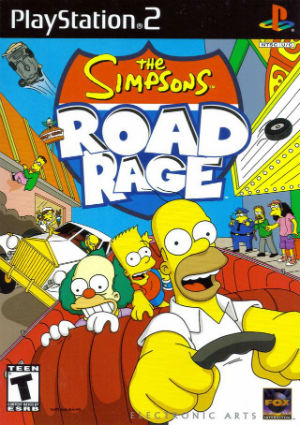 There was a point in time(between 2001 to 2007) where the Simpsons began churning out a few games that were very unsubtle rip-offs/clones of other very successful and popular games at the time(like wrestling games, Tony Hawk, GTA, etc.) with mixed results to say the least, ranging from great, like Hit & Run and The Simpsons Game(2007), to outright abysmal like The Simpsons Skateboarding and Wrestling. The Simpsons Road Rage is very different on the other hand, it's easily the least subtle rip-off of the bunch. Is it a gem like Hit & Run, or a car crash like Wrestling? Let's find out

The story is, erm, underwhelming to say the least, though pretty par the course for Simpsons games. Mr. Burns buys out the Bus Transportation Systems in Springfield, and replaces the buses with ones that run on nuclear power. And this is obviously a threat to public health, so the Simpsons and a few other members of Springfield ban together to raise money($1 million) to buy it back from Burns. Of course, one has to wonder how $1 million is enough to change Burns' mind considering he's a billionaire. And to go along with that, the delivery isn't very interesting or funny enough to be invested in it, not to mention Burns' motivation for buying the transportation system is never explained. 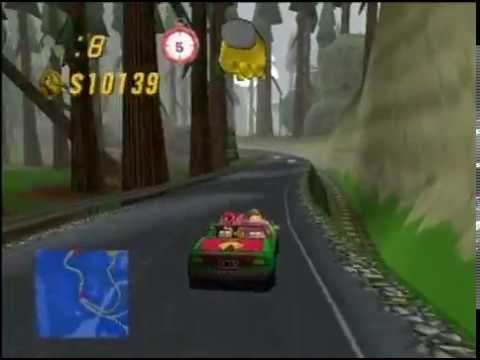 If you're already aware of the game Crazy Taxi, then you already know what the game plays like. You drive around 6 different levels of Springfield picking up different locals an take them to the destinations in a certain amount of time, and the amount of money you receive from the passenger depending on how fast they get there. The more money you raise the more characters and locations you can unlock.

There are 6 locations of Springfield, consisting of the usual spots like Moe's, the Kwiki-Mart, or the Android Dungeon, to more obscure places fans will recognize like Springfield Gorge or The Box Factory, and the places characters are either places they normally visit or places they've visited in past episodes sometimes with a a quote related to that episode. There are also 17 playable characters to choose from(including 3 versions of Homer). There is also a Sunday Drive mode with is more or less a "Practice Mode" which is mostly just for you to explore different locations, looking for shortcuts that can benefit you in the main game, there is also no time limit or money earned, so you don't have to worry about any penalties. Lastly there is a Mission Mode where you play missions with certain stipulations and finishing them all gets you a reward, The Car Built For Homer. There's also a multiplayer mode where you race against another player to get your passengers quicker.

Overall, the gameplay, while not awful, is not amazing and gets old quickly. The cars themselves drive very quickly and turn quickly, though perhaps to quickly, there are many moments where you take a corner to quick and lose your path and must recover often wasting time. There's also some very sketchy hitboxes between cars, items, and buildings, as there are many times where a small piece of debris can get you stuck and you must mess with your car or reset your position to get out of it, same with buildings, as hitting corners can also get you stuck. Raising money's not very difficult, as in each playthrough you can get a good $10000 if your quick enough, and it's not very difficult to master either. Thus the easy difficulty makes it very tedious. There's also the lackluster mission mode, no clever mission, with all of them consisting of you hit X amount of Y in Z amount of time. Only three levels really take advantage of the game's main gimmick. The mission's aren't very hard either, as you have enough time to complete them and there's usually an infinite amount of items to destroy, and whether you accomplish them depends on where you are if you're in a lucky place. The absolute worst mission is Lisa's mission, which consists of her destroying groups of tree's in a small amount of time, and unlike the other mission's there's a finite amount of logs to destroy as well as a fork in the road, with both roads containing a group of logs, and there just isn't enough time to get through the other fork and is near impossible to make. I swear no matter how I approached the level I could never find away to complete it in time. Then there's also the fact that if you lose/restart a mission enough times you can skip it completely and move on to the next one, and unlike The Simpsons Hit & Run, these DO count as a completed mission, thus making doing these missions a waste of time.

There's also the problem with the characters, they all feel the same. Some exceptions like Mr Plow, Plow King, and the Canyonero are mainly due to their size, and cars like the Hover Car, Apu's Sports Car, and the L'il Bandit due to being sports cars/high tech, but even then the differences are negligible, especially once you get going. 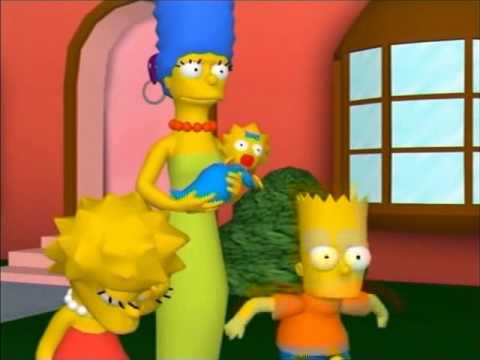 As you can see, the game doesn't look very good. While not awful, the game could look better, character models look very strange and, at least for the year the game was released, it still could look better. The buildings also have very saturated colors, as a lot of them look a lot darker than their TV show counterparts. Also, why is the Simpsons house red? On the bright side, the vehicles look great, while some of them do have saturated colors, it's no where near as bad as the buildings, and they really benefit from a bit of cel-shading.

The Simpsons usually relies on humor, dialogue and jokes for its main source of entertainment. Unfortunately very little bit of it is there, as 90% of the time they just throw out one-liners that get old and annoying quickly. There are some funny exchanges between certain characters(which happen rarely unfortunately), or towards the locations they're attending, but both of these are very rare and not really worth sitting through everything else. The music is really nothing special either, there is a nice jazz tune played during Sunday Drive, but otherwise the OST is pretty uninspired and forgettable.

Overall, to reiterate, the game isn't awful, it's playable and can be fun in short bursts. But as I've repeated, it gets old very quickly, there's not enough diversity between the characters, and while the levels can be interesting, it can't carry the game. The mission mode is also a complete waste of time and the story just isn't interesting enough to care. I can really only recommend it to Simpsons fans who might enjoy some of the dialogue/jokes and the references, but even then it won't keep their attention for long.