This isn’t a game, you know… Now these games will determine which of you is fit to be my pet. – Rainbow Dash

Could it be? A Rainbow-Dash-centric episodes that doesn't totally suck? This must be my lucky day. How did DHX manage it? Let's take a look at May the Best Pet Win! and see.

Summary
Rainbow Dash is speeding through the air one fine day, and is joined by Owlowicious. The two begin to race, and oddly Owlowicious is even faster than Dash. She doesn't particularly care, just having fun with the pure rush of speed and joy of competition. Wait a moment... Rainbow Dash is losing a race, and she doesn't care? Well then, this has to be a dream. This is confirmed when Owlowicious starts morphing into a mix of all the Mane Six' pets. The appearance of Opal popping out of Angel Bunny's mouth, hissing, shocks Dash enough to jar her awake from a nap (a nice callback to the habit mentioned in earlier episodes), to find all the pets around her. 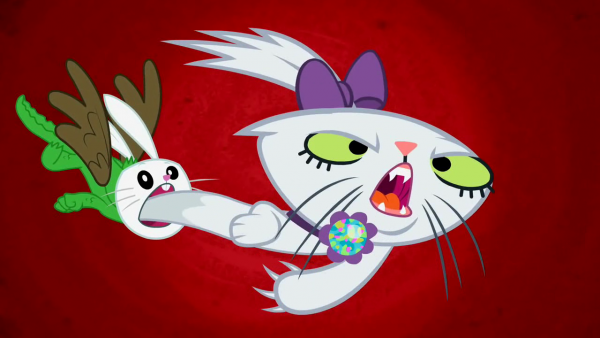 Welp, that's my next month's worth of nightmares prepared... Thanks, DHX!

The Mane Six also appear, having arrived for their weekly Pony-Pet Playdate. Fluttershy is worried that Dash might be angry at being left out of the loop, but she agrees that since she doesn't have a pet of her own, it didn't make sense to invite her. But after hearing how much fun she is missing out on, she decides to get a pet of her own, to Fluttershy's delight.

Back at the cottage, Fluttershy and Dash sing a duet as she shows off all the potential pets in her menagerie. It takes a while, but Flutters finally gets the hint that it needs to be a creature that can fly. Dash decides the only way to find the best pet is to have a competition. This takes the form of various contests to ascertain speed, coolness, bravery and other factors Dash is looking for in a pet. Flutters begs Dash to let a tortoise compete, despite not meeting the flying requirement. He totally tanks the tests, too.

Finally, though, the field is narrowed down to four fliers: an eagle, an owl, a falcon and a bat. Dash announces the final event... a race through Ghastly Gorge, with the competitor that crosses the finish line with Dash being the winning pet. The tortoise competes too, despite not making the cut earlier.

While the various hazards of Ghastly Gorge hamper the rest, Dash manages to sail through, having flown the course multiple times. However, her nonchalant attitude becomes her downfall, as she fails to watch where she's going, and smacks into a cliff face. This causes an avalanche of falling rocks, one of which pins her wing to the ground, while the other racers pass her and leaving her behind. Trapped, scared and on the verge of tears, Dash is delighted to hear someone is coming. She's less delighted when she sees it's the tortoise. However, he is able to get his head under the rock, and lifts it, freeing her.

Meanwhile, the Mane Six are waiting at the finish line, and grow concerned when Dash isn't the first to cross. Seeing the rockslide in the distance, concern turns to panic, but they soon spot the tortoise heading their way, carrying a rather rueful Rainbow.

Although the first one to finish the race was the falcon, Dash points out a technicality... she had said that the pet who crossed the finish line with her would earn the right to the space left in Team Dashie, and that was the tortoise. The falcon accepts this disappointment with dignity, and a wing shake for the winner. 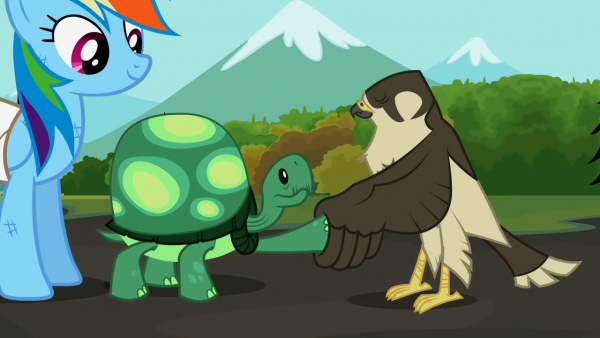 Poor fella; don't worry, you're still a champion in my book.

Perhaps the guilt at not trying to assist Dash in her predicament is the reason he takes it so well... or maybe it's because he can't actually speak up to object. Toss a coin to decide. Either way, Dash dubs her new pet Tank, in honour of his determination. When Fluttershy points out that Tank, being a tortoise, can't fly and will keep Dash grounded (but not in the good way), they rig up a propeller for him. Maybe she should rename him Helicopter.

Dash closes the episode with a Letter to Princess Celestia, delivering the moral: speed, ability to fly and coolness are all worthy things to have, but physical ability is not as important as having the right attitude.

Thoughts on the Episode
I'm not a huge fan of Rainbow Dash, and to be honest, many of her focus episodes don't help her case in the slightest. Some of the most disappointing episodes in the series for me are Dash episodes. This is not only because she's possibly my least favourite Mane Six, those episodes truly do suck over and above that. Here, however is a Dash episode actually done well, developing and improving her character by having her learn a valuable lesson about tenacity, as well as introducing Tank to the series; would that all of her episodes could do so well.

While the final outcome is no real surprise, there is adequately competent foreshadowing throughout the episode. That Tank can lift objects with his head was demonstrated early on, during the bravery test. In the song, Tank briefly dons a pair of sunglasses when Dash mentions that she wants a cool pet, and we see Dash wearing a pair of her own, so there's a minor link there too.

The humour of the episode is pretty good. There are a few running gags, such as the whole turtle-tortoise debate, deliciously subverted at the end by Fluttershy being the one corrected on her nomenclature, and a brick joke or two such as Dash saying "gesundheid", first to the eagle and then to Twilight. Drill sergeant Dash is pretty funny, too. The best gag is where Twilight objects that coolness, awesomeness and radicalness are all pretty much the same thing, earning her a condescending pat on the head from Dash. And doesn't she just look delighted?

The musical number of this episode is also pretty great, and to this day I still enjoy listening to the song when it come up on my MP3 player. Speaking of the music, there's also a bit of fourth wall joke made when Dash whistles a few bars along with the background music ("Ride of the Valkyries", unless I miss my guess) during the race. It's a minor touch, but I thought it was creative anyway.

The moral of the episode is pretty standard, but it's a particularly good lesson for Dash to have learned to see value in things other than speed and coolness, particularly determination and perseverance, the things that I appreciate in Dash's character myself. It's also pretty appropriate that Tank convinces her by demonstrating her own Element, Loyalty; another example of how they complement each other.

The episode is not without its flaws, however. Dash's dismissive attitude towards Tank in the beginning and her treatment of him don't fall far short of animal abuse, until he actually saves her hide. She's also remarkably blasé about the setting the final race in a place like Ghastly Gorge, with its not inconsiderable dangers to life and wing... those Quarray Eels in particular are pretty nasty. It's played for laughs, but the bat ends up basically eaten, and only escapes through the eels nose. There's also the fact that Dash seems more interested in being first than seeing the ability of the animals: she outright says "But I'm supposed to win!" when she gets trapped and sees the others flying away without her. She also used the trick favoured by all five year olds (people, not ponies) of speeding up the ready-set-go for an unfair advantage.

She also exploits the loophole of "the one who crosses the finish line with me is the winner" to deny the falcon his rightful prize. She specifically states that requirement as necessary to prove that the winner can keep up with her, which Tank assuredly can't. She may be sticking to the letter of the law, but she sure is violating the spirit of it (not particularly unknown behaviour from her.) It might have made a stronger statement is Dash admitted that the falcon actually had won the right to be her pet, but she was reversing her decision in light of Tank's heroic assistance.

Rainbow Dash: <snip> Coolness. Awesomeness. And radicalness.
Twilight Sparkle: Aren't those all the same thing?
<beat>
Rainbow Dash: You would think that, Twilight. And that's why you would never qualify to be my pet.

The bat plays the MLP theme on a set of glasses, then shatters them with a hypersonic shriek.
Rainbow Dash: Whoa! That was truly awesome! But I'm afraid this is the radicalness competition, so I'm gonna have to take some points off.

Final Rating
5 – Celestia Rank: A great episode. It will be re-watched frequently.
4 – Luna Rank: A good episode, but with one or two problems that prevent it from being great.
3 – Spike Rank: An average episode. Positives and negatives are balanced.
2 – Discord Rank: Worth watching once. After that, turn it to stone and put it in the garden.
1 – Nightmare Moon Rank: Send it to the moooooon!

So that was a good Rainbow Dash episode... give or take the odd wobble. Next up, unfortunately, is an episode set to upset all the gains from this one... until then, stay on the sunny side.