I hate being alone. – Rainbow Dash

You know that I said this is a bad Rainbow Dash episode? Well, I take it back. It’s a bad Mane Six episode. Heck, it’s a bad Ponyvillian episode. Nopony is going to come out of this one looking good.

Let’s get this over with.

Summary
It’s a sunny day in Ponyville, but the local weathermare is reporting a high chance of DOOM! in the local area. Rainbow Dash helps out some of the ponies when disaster strikes, and is duly given due praise. However, she starts liking the praise a bit too much, and it starts inflating her ego. After a few too many boastful comments, the Mane Six start to get annoyed with her.

Sometime later, a thief has apparently stolen Twilight’s balloon, and wrecked it, and is plummeting to her DOOM! while Dash delays her rescue to sign some autographs. When she does get on the case, the balloonist is instead rescued by a mysterious masked figure, leaving Dash to get tangled in the balloon. The fickle fools of the town immediately decide that this new hero is the bee’s knees, and Mayor Mare makes the new arrival eponymous. Dash is none too happy at being overshadowed.

Over the course of the next few subjective hours of screen time, a pattern becomes evident. Dash arrives to help prevent a runaway vehicle, but fails. Mare-Do-Well pitches up and stops the cart, proving that she’s stronger than Dash (who is a Pegasus, why should she be strong at all, anyway?)

At a construction site, a mechanical failure leads to a building falling apart. Dash’s attempt to boast is cut short by a plank flying through the air. 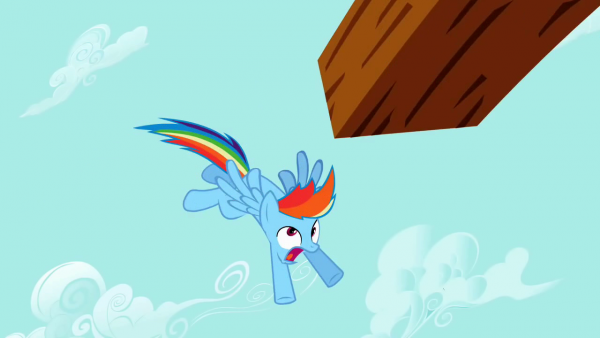 Actually, I think Spiderman threw that one because Dash stole his catchphrase.

She does manage to save one construction worker who would surely have been DOOMED by being crushed under falling bricks, but Mare-Do-Well saves the other four, by apparently being able to sense when debris is going to fall before it actually does. Not that the worker Dash saved says “thanks” or anything, the ingrate.

Next, Rainbow sees a leak in the dam, and plugs it with a hoof… actually causing the crack to widen. Then she literally pats herself on the back, leading to the collapse she was trying to prevent. 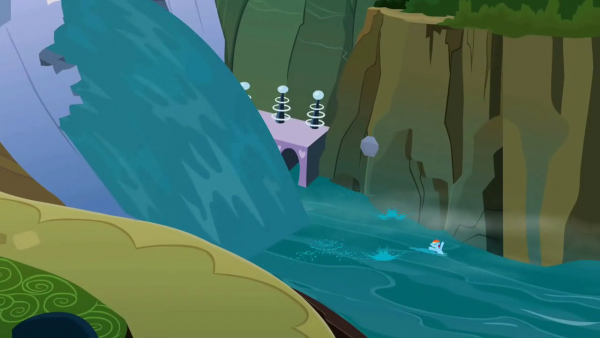 Quick! Get Superman to spin the earth backwards! We’ve already ripped off Batman and Spiderman, so why not?

Mare-Do-Well saves her from the flood and magicks the rocks back into place, leaving Dash to wonder how she can compete. She tries to console herself by thinking about the fact that she can fly and Mare-Do-Well can’t… only she CAN.

Dash sulks while the Mane Six discuss how wonderful Mare-Do-Well is: strong, fast, magical, fashionable and best of all, humble about her heroics. Dash shouts at them all and storms out, looking for something to prove she is better than Mare-Do-Well, but the DOOM! seems to be expended. Stupidity ensues, and eventually Dash gives up. 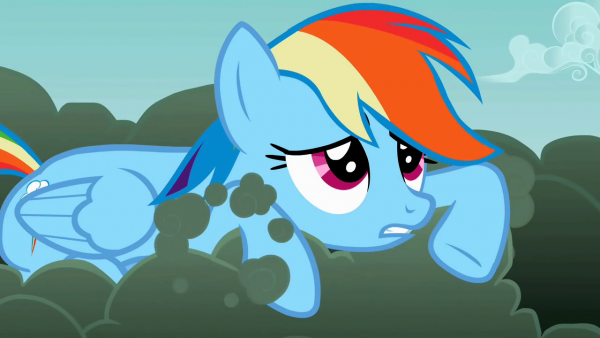 Things get even worse when she finds out Ponyville is giving Mare-Do-Well an award for her good deeds. Dash decides to unmask the Mare, and chases her around, eventually tracking her down and pulling off the mask to reveal Rarity. Then more Mare-Do-Wells come out and reveal themselves as the rest of the Mane Six. They were taking turns playing the Mare in order to show Dash a lesson about being a hero with humility. Dash gets the point, and this interminable episode grinds to its conclusion.

Thoughts on the Episode
There’s a comic in the episode discussion thread that perfectly sums up this episode’s huge fatal flaw. I’m sure you’ve already seen it. Despite the fact that sitting her down and just telling Dash that she was making too much of herself would probably have avoided this entire problem, their first reaction is to gang up on and humiliate her. The burned hoof may teach best, but you don’t go grabbing the hoof and thrusting it into the flame deliberately. There’s also not much point in having a moral of “don’t talk yourself up too much” when they were doing just that in praising Mare-Do-Well, who was them all along. One could perhaps argue that they were aware of that, but doing it purely to try to get through to Dash, but really, they could have just owned up to it right there instead of allowing Dash to leave.

This episode doesn’t give Dash much respect either. Yes, she can be boastful, but not to that extent. And while she’s not book smart, she isn’t an idiot either. Once she saw that Mare-Do-Well had both a horn and wings, she should have immediately realized it could only be one of the Alicorn Princesses or multiple ponies sharing the wearing of the cape. The Royal Sisters are ruled out due to size, since they’re noticeably larger than most ponies and Mare-Do-Well is certainly not. That she didn’t cotton on is pretty much a middle finger to her from the writers.

The citizens of Ponyville look pretty bad by the end, too. As soon as Mare-Do-Well makes the first rescue, they instantly forget about Dash. Even Scootaloo, who has always idolized Dash, turns on her. The construction worker whose life she saved runs off without a word of thanks, or even an acknowledgement that both of them were needed for the rescue. The whole town comes across as fickle and forgetful.

Is there anything good to be had here? Maybe one or two of the jokes can get a slight chuckle. There’s also some continuity nods here and there, like Pinkie Sense playing a role in the construction site scene. The design of the Mare-Do-Well costume is pretty cool, despite being lifted from Batman. On the whole, though, this episode is just a chore to sit through, and it’s probably worse for Dash’s fans on account of how she gets treated… by the other characters and by the writers.

Quotes (There are no highlights)
Twilight: Call me silly, but I think all this attention might be going to Rainbow’s head…
Pinkie: I think you may be right, Silly.

Pros: Maybe one or two gags worthy of a smile; Pinkie Sense gets a reference.
Cons: Everypony gets a slap in the face; utterly predictable; a botched moral; both Marvel and DC should sue for copyright infringement.

Final Rating
5 – Celestia Rank: A great episode. It will be re-watched frequently.
4 – Luna Rank: A good episode, but with one or two problems that prevent it from being great.
3 – Spike Rank: An average episode. Positives and negatives are balanced.
2 – Discord Rank: Worth watching once. After that, turn it to stone and put it in the garden.
1 – Nightmare Moon Rank: Send it to the mooooon!

Well, thank Celestia that’s done. After two episodes of Dash, the next one will focus on Rarity, with some bad behaviour on the part of my favorite fashionista pony. Hey, she’s not perfect, I can admit that.

Tune in next time, same website, same blog, and as always, stay on the sunny side.