I love Rarity but this episode really tries its hardest to make me dislike her. I mean love as a character, not romantically – whatever floats your boat, but that’s just not my kind of thing. But in the words of the Cat!Inquisitor, “This is your judgement day, bud. I gotta be cruel. There can’t be no favours.” Enough stalling, let’s do this.

Summary
Rarity is in Canterlot to buy fabric, and is staying at the Castle as a guest of Princess Celestia by way of Twilight’s request. She decides that making Twilight a dress for her upcoming birthday party would be the perfect way to thank her. She has a chance encounter with a pair of Canterlot socialites, Jet Set and Upper Crust, who admiringly ask about her hat. When she is outed as being from Ponyville, the two retract their approval and insult Rarity as being “country”, before sticking their noses in the air and leaving. This snub spurs Rarity to show her class by making Twilight’s dress super fancy and something “worthy of Canterlot”.

On her way back to her apartment with necessary supplies, she literally runs into a pony of very high social standing named Fancy Pants. 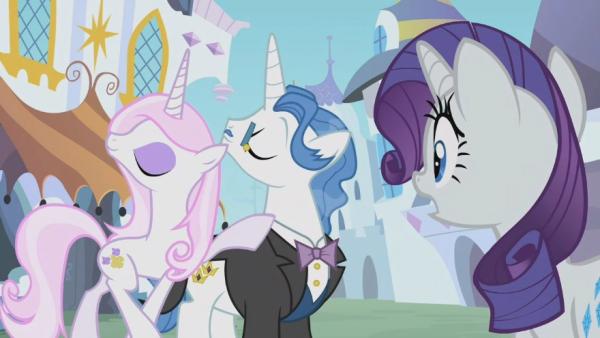 He doesn’t even wear pants!

Stammering apologies, Rarity lets slip that she is a guest of the Princess, which Fancy Pants thinks makes her worthy of his attentions, and he invites her to join him in his VIP (Very Important Pony) box at the Wonderbolts Derby. After a brief internal debate about whether to prioritize the social boost spending time with FP will bring, or the time needed to make Twilight’s elaborate dress, she chooses the former.

Joining FP are other important high society ponies, who are shocked to hear her contradict him in who is most likely to win the Derby. As it turns out, Rarity’s inside knowledge of the Wonderbolts, which of course comes from Rainbow Dash, means her prediction is vindicated. This further impresses FP and his hangers on. I like this scene for its treatment of both Rarity and Fancy Pants. First, it shows Rarity is not afraid to speak her mind, and second, it shows FP is quite gracious when contradicted and proven wrong. As a bonus, it’s the first time Fleetfoot is named.

Unfortunately, this is almost immediately followed by Rarity lying about who Rainbow Dash is, saying she’s the Wonderbolts’ trainer. This is bad because, well, lying is wrong, and inexcusable, even for one’s favourite pony. Secondly, it’s a lie that makes no sense: she could just as easily told the truth. Rainbow Dash is the winner of the Best Young Flier competition, and one of the ponies who saved Equestria twice, and a pony who clearly has the ability to become a Wonderbolt herself. Which should be plenty important enough for anypony. Nice going, writer!

Suddenly being the center of attention, Rarity is invited to various events by the socialites. She tries to refuse so as to work more on Twilight’s dress, but eventually gives in, by way of a musical montage. I love this song, Becoming Popular. I don’t care who you think is the best singer out of the Mane Six, unless you say “Kazumi Evans”, you’re simply wrong. (Okay, not really, music is very subjective… still, you can’t deny she has a lovely voice.) 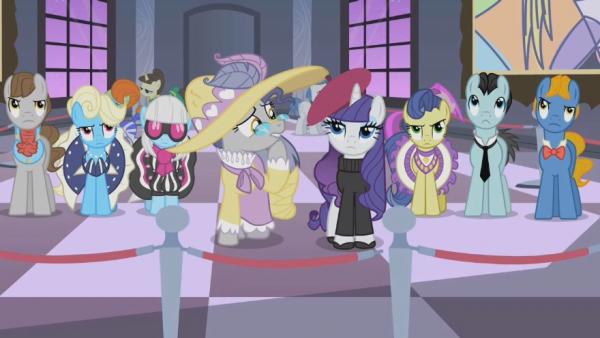 Rarity, having made little progress on Twilight’s dress, is about to return home in time to finish it, when she gets a written invite to the Canterlot Garden Party, courtesy of the two snooty ponies she wasn’t important enough for before. She decides to go, despite this meaning she will miss Twilight’s birthday. She next perpetrates the biggest lie ever written in the show, claiming Opal is too sick to travel as an excuse for why she can’t be there. Despite the entertaining histrionics, this is again a lie that is pretty unnecessary, and y’know, wrong. (It might even be… badong!) The simple truth would probably have been accepted.

Rarity is about to leave for the party when the Mane Six surprise her: they decided to move the Twilight’s birthday to Canterlot so Rarity could attend despite Opal’s condition… when they ask to see Opal, Rarity douses her with water to make her look sick, which earns her a face that promises retribution… 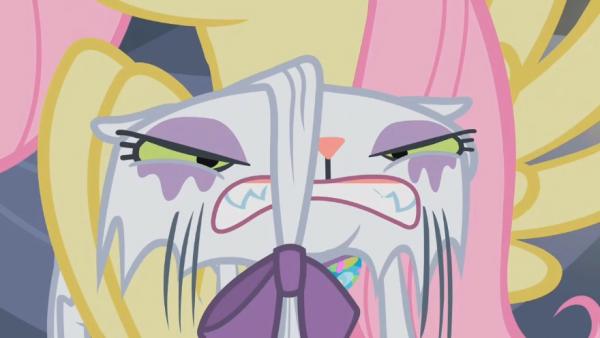 Of course you realize, this means war?

Luckily, Twilight prefers thinks the plain dress and thinks Rarity deliberately made it that way. The group head to the Canterlot Ball Room, which Pinkie has decorated using her party canon (first appearance!), since the Garden is being used for the Garden Party. As the evening proceeds, Rarity joins in the party antics of the Mane Six, but decides to try to split her time between the two parties. This leads to one of the funnier sequences in the show, plus what I consider the best visual gag ever: 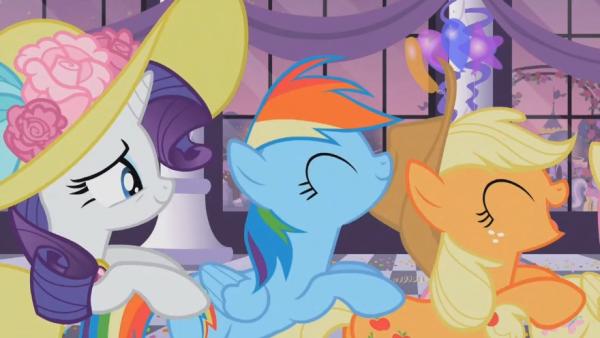 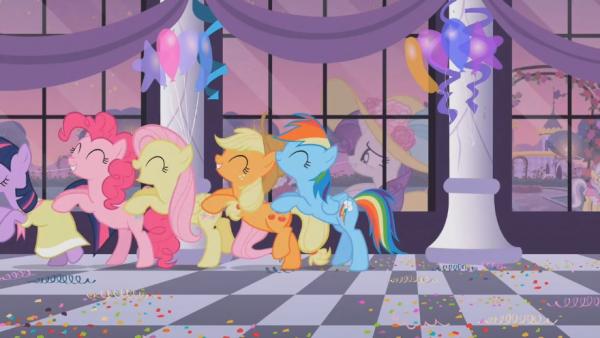 Of course, splitting her time between two parties tires her out, and she ends up being found out when she accidentally brings in a croquet mallet from outside. She tries to apologize, but Twilight still doesn’t realize she was being dishonest, and thinking of her as just being business savvy, is perfectly okay with Rarity going to the other party.

Then disaster… Rainbow Dash suggests they all go to the other party, which they promptly do. This is probably not as presumptuous on Dash’s part as it might seem; after all, they had no idea that Rarity had been specifically invited, or that it was an exclusive party. Still, their behaviour at the party is pretty disruptive and boorish.

Rarity tries to pretend she’s not part of their group, but when Fancy Pants asks about Twilight’s dress, the jig is up. Twilight proudly proclaims that Rarity made her dress, and she loves it. Fancy Pants asks if Rarity does know the other ponies, and she hesitates… however, seeing the dismay starting to appear on the faces of her friends, Rarity confirms that she does know them, and that she considers them wonderful ponies and wonderful friends. When Jet Set and Upper Crust deride them all as “ruffians”, they are unexpectedly defended by Fancy Pants himself, who says they are “charmingly rustic”.

Rarity starts a Lesson Letter to Celestia, but gets to deliver it to her in person instead, saying that one is a product of where they come from, and they should always be proud of it.

Thoughts on the Episode
This episode is entertaining, but it really does a number on Rarity’s integrity. She tells blatant lies for her own benefit, sneaks around behinds the back of her friends, and generally behaves more like a weasel than a pony. And this is coming from ME, so you know it has to be bad! Perhaps even worse, her lies and bad behaviour are never discovered, never acknowledged or even noticed in-universe. I also feel that her treatment of Opal was reprehensible. Never mind Rainbow’s treatment of Tank; this was outright animal abuse. I can only hope Opal gave Rarity a good few bites and scratches when they got home, because they would definitely be deserved. And although she was polite to her poor, put upon bellhop, neither she nor Princess Celestia really seemed to care about his problems. The moral too pretty much comes out of nowhere, and the lesson pretty meaningless considering she spent much of the episode trying to deny her roots. Worse, she sacrificed nothing of herself to learn the lesson. Oh, and one more big flaw in the episode: No Spike! At Twilight’s birthday party! He’s not even mentioned. Not cool, writers, not cool!

Now that I’ve fully acknowledged the bad, allow me to focus on some good. First, we see that Rarity really does have what it takes to make it in Canterlot. As in real life, making the right connections socially is an important part of making a success of your endeavours, especially in a society where status is paramount. Her ability to think on her hooves is demonstrated as well, even if it is mostly used in devious ways.

Fancy Pants was a great character to introduce. Despite his position as an elite of Canterlot, he seems quite down-to-earth, friendly and kind. (And he has a huge… horn… wink wink, nudge nudge) He’s nowhere near humble, of course, but he still provides a wonderful contrast to Jet Set and Upper Crust. Our first view of these two is them stalking about, noses in the air. And they’re a pair of trend chasers, too. They are snobs, through and through, and give the lie to anyone who ever described Rarity as such. There’s a difference between pride and arrogance, and arrogance is needed for someone to be a snob. Despite her poor showing in other areas in this episode, at least Rarity is not anything like those two.

Also, it should be acknowledged that she did make the right choice in the end. And she didn’t have to actually make the bad decision and then somehow make it right, as happens in some other episodes. When push came to shove, she came down on the correct side.

I enjoyed the humour in this episode too. The two-party sequence is extremely funny, and is done with minimal dialogue, letting the visuals and facial expressions do the work of portraying the hilarity.

The aforementioned conga line gag. Plus Rarity absently dipping her hors d'oeuvres into the chocolate.

Pros: Great humour, especially visually; some nice firsts introduced in the form of FP and the party canon.
Cons: Rarity really misbehaves and yet avoids due karma mostly through luck; a clumsy, tacked-on moral; no sign of Spike.

Woah, ironic. At any rate, I think I’ve spoken enough ill of Rarity… in the next episode, there’s a scene where I can actually defend her actions, and thus the rightful order shall be restored to the universe of this sunshine vulpine. Until then, remember that honesty is the best policy (even if you think you can get away with lying) and stay on the sunny side.