For how long The Simpsons has ran on TV, you'd expect them to churn out a bunch of games. And they did, and unfortunately, and unsurprisingly, a lot of them turned out to be crap, with only a small handful of games worth trying. The Simpsons Hit & Run is part of that weird era from 2000-2007 where they try to parody what ever was popular at the time before going all out with The Simpsons Game. We had Simpsons Wrestling(an awful parody of Wrestling games), Simpsons Skateboarding(an awful parody of Tony Hawk games), Simpsons Road Rage(a so-so, blatantly plagiarized version of Crazy Taxi), and then there's this game, The Simpsons Hit & Run, which is a parody of the Grand Theft Auto series. However, this time around, unlike the previously mentioned games, Hit & Run copies all of the right things about GTA and makes for a very fun experience. 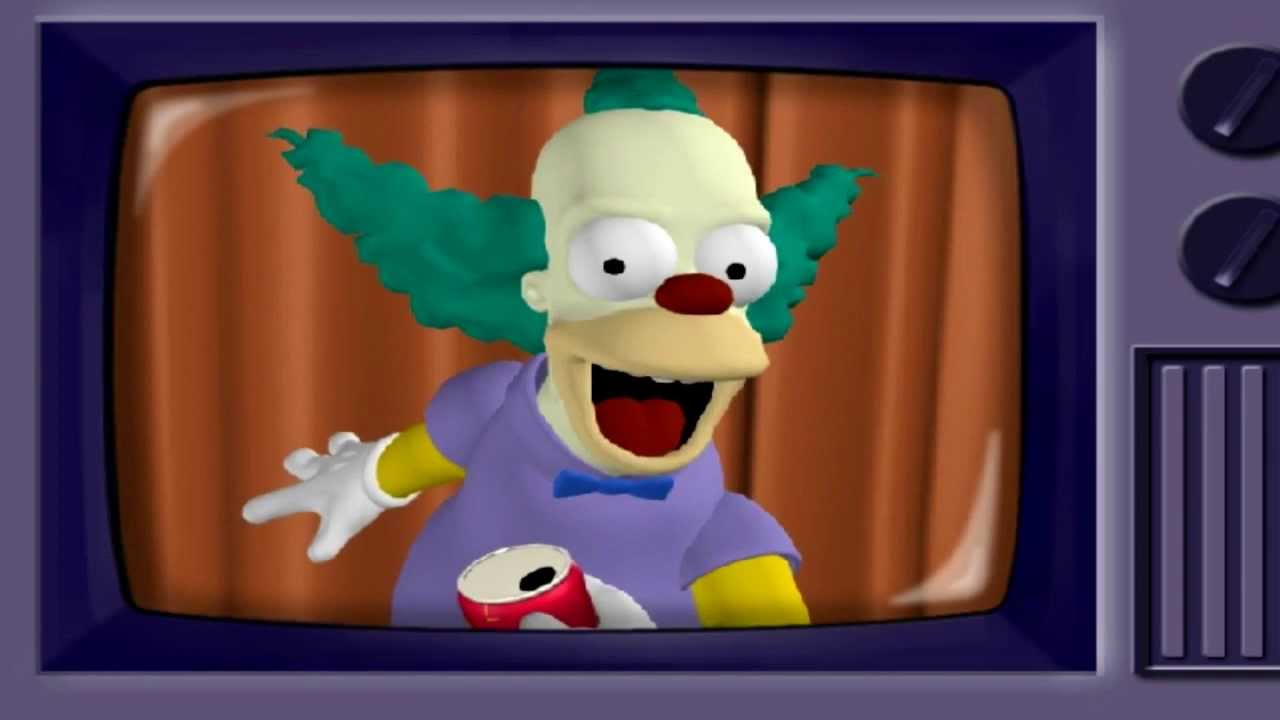 A new flavor of Buzz Cola is introduced into Springfield, advertised by Krusty the Klown, and becomes the hot new thing in Springfield, however, as the story progresses, it becomes more apparent that the Cola has a dark secret. Meanwhile strange Black Vans(which turn out to be bogus), and Wasp-Surveillance Cameras(which are legit) begin showing up around town. The story revolves around the Simpsons family and Apu where they must uncover the secrets of the new Buzz Cola.

Story is fun to follow and does a good service to the Simpsons franchise, as the story was penned by the show's writers themselves. The writing is funny and the casts consists of most of the show's favorites. Also Mr. Burns isn't the villain in this, which is a very huge plus, in fact, he becomes crucial to saving the town later on.

The game consists of 7 levels, each with 8 missions. Each level has it's own story to follow while also adding to the game's overall plot as more is shown as the game progresses. 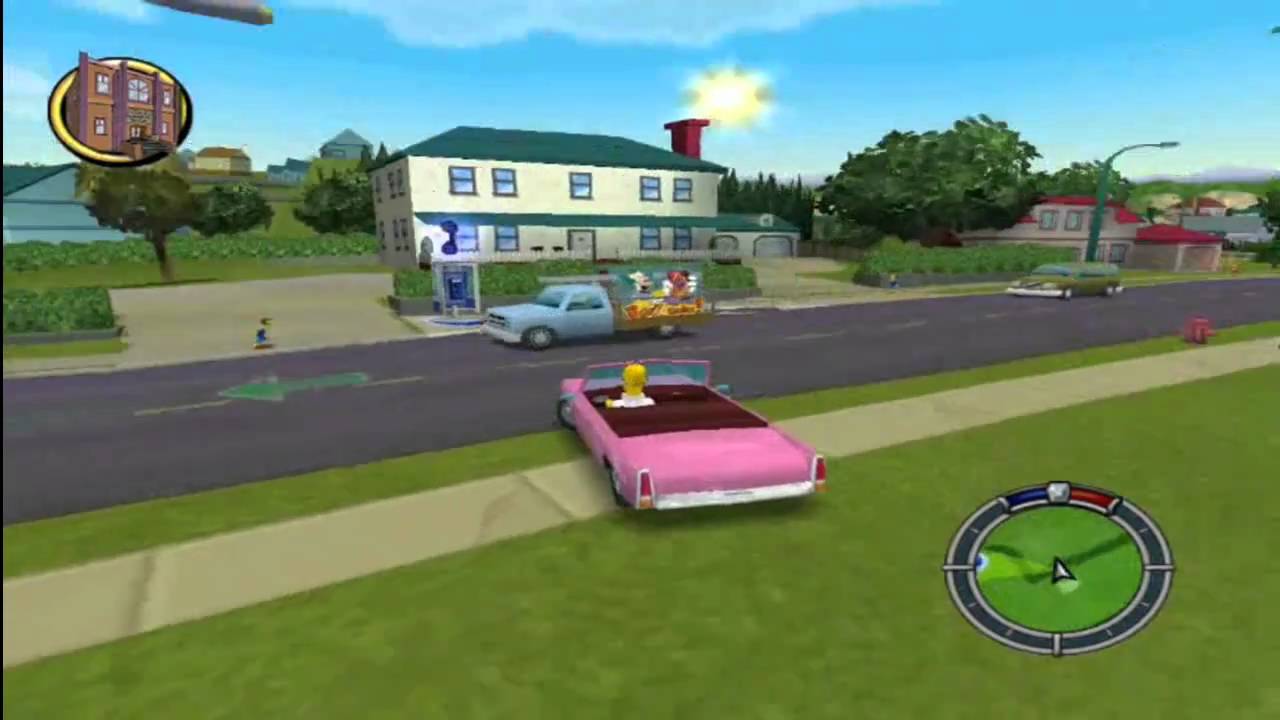 As said earlier, the game is a parody of the Grand Theft Auto series, just without all of the violence. However, that does not mean the game isn't fun to play. On the contrary it's a blast. Each level is a sandbox of a certain area of Springfield each full of tons of things to do, whether it be exploring, doing missions, finding collectibles, or racing. The game also has a ton of cars that we've seen in the show and a few that are exclusive to the game, each of them having certain stats that make them useful in certain missions and situations, and the driving mechanics work very well this time around(as opposed to Road Rage). You can also repair your vehicles whenever it's damaged. Destroying your vehicles also causes you to lose coins, but only about 10 every time. One annoying thing about the game, and this goes for both ground and driving sections, is that the camera can be pretty cumbersome, most of the time it's fine, but there are some areas in the game where the camera loves to hang in the worst angle and not let you adjust.

The maps usually have tons of things to do, such as looking for 7 collectible cards, which unlocks a multiplayer race for each level(these aren't very fun). Collecting all of them in the entire game unlocks an Itchy and Scratchy cartoon, which is pretty funny. Each card is actually cleverly hidden and is usually in a place the card is relevant to. Bonus missions has you helping a character do some sort of task for them and finishing the mission unlocks a new car for you to use. Two other ways to get new cars is buying them either from Ol' Gil or a certain character that you can buy them from(as these are usually required). The other is by doing races, where you must take part of a race and win, which usually include the Checkpoint Race(ran by Ralph Wiggum), the Circuit Race(ran by Nelson), and the Time Trial(ran by Milhouse), and winning these unlocks a new car, which is usually the best car to use in the level. There's also a 4th race, the Wager Race, which usually involves you putting in some coins to bet on, and if you can win the race, your prize is usually double of what you bet. There's also costumes to buy, which we've seen the characters wear in the show, which includes Donut Head Homer, Officer Marge, Cool Lisa, Bartman, and so on. Gags are also scattered throughout each level, and gags are usually references to items we've seen in the show. And lastly, there are the wasp cameras, 20 of these are usually scattered through each town, and it isn't much fun, as some of them require you to go out of your way to find them. It's not too hard, but difficult enough to 100% the game, but it's usually worth it as doing so allows you to use the "all car cheat", which allows you to use every single vehicle in the game, including a few story cars that normally aren't able to use. Lastly there's the Hit & Run meter, which usually fills up when ever you do felonies, like destroying property, hitting other people/cars, and etc. Filling it up completely will get the cops after you, though it's of little consequence. The worst you get is a 50 Coin fine(which isn't much considering how easy they are to get), and maybe make you restart your mission because it messed you up.

There are several types of missions in this game, ranging from racing, collecting items, reaching an area within a time frame, destroying other cars, avoiding enemy cars, and etc. Some missions like to mix these objectives to allow for more variety. The only issue with these is that most of these missions are timed, which may be annoying for some, and at times can be frustrating, but the missions are doable within the given timeframe. Some missions may require you to use a certain vehicle or outfit to use, giving them some importance to the game. Also, much like Road Rage, you can skip missions if you fail them enough. Unlike that game however, you can't skip important missions and skipped missions aren't counted as completed

The town of Springfield is well crafted in the 3D world. Tons of recognizable locations in the Simpsons are faithfully recreated in the game, and very hidden details and references to the show are scattered throughout each level and are plentiful, fans can recognize them very well and says a lot about the game's detail. However, the character models can be a bit off-putting, though not terrible like past Simpsons games like Road Rage and Skateboarding, as well as the game's beta build. This, like most other cartoons inspired games, though could probably benefit more from a bit of cel-shading like The Simpsons Game(2007) did, which is still the best looking game in the series.


No cheap imitations here, every character in the game is voiced by their respective voice actors, and unsurprisingly the do a great job at it. There's a ton of great dialogue in this game as opposed to Road Rage which relied mostly on unfunny one-liners, and some of the one-liners here usually generate a good laugh. The game also boasts a great soundtrack, and one I feel doesn't get enough love. Each character has music that fit's them, like Homer usually gets the traditional Simpsons style music plus a big tuba, Bart's levels have a bigger emphasis on rock music, Lisa is Jazz, Marge is classy and Apu is Indian. The overall OST is much more memorable than Road Rage's and is one of my personal favorites.

This is one of the best Simpsons games, best cartoon-licensed games, and one of the better GTA clones out there. This is a game I can recommend easily to both fans and non fans alike. It's a little on the pricey side as there's been more demand for it, though it's usually around $20, but it's definitely worth it