Hold on to your hooves! I am just about to be brilliant! – Chancellor Puddinghead (Pinkie Pie)

Apart from the characters, one of the biggest draws of this show is the intriguing world of Equestria itself. In this episode, we’ll get to learn a bit more about the history of this place of wonder, magic and pastel-coloured ponies.

Summary
The Mane Six (and STEVEN! I mean, Spike) are in Canterlot to put on a play about the founding of Equestria. As they head to the Palace, they play a game of I Spy, although it seems that ponies don’t actually know how the game is supposed to work, instead just shouting out things they can see. As they are donning their costumes, a few squabbles mar the group’s usual harmony, exacerbated by an open window letting in frigid air from the blizzard raging outside. 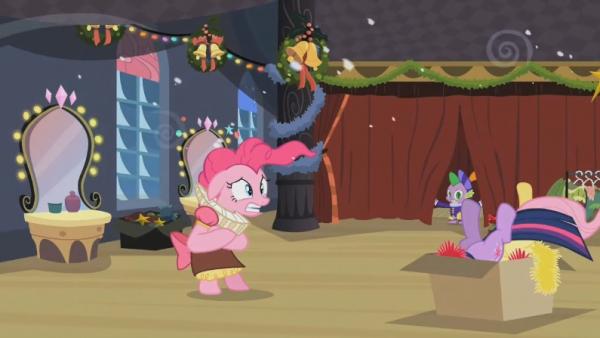 You thought I was going to put some kind of Frozen reference here, didn’t you?

A somewhat beleaguered Spike is serving as narrator to a packed audience of ponies. He sets the scene as some number of years BC (Before Celestia) in a land that is close to, yet is not Equestria. In this age, the Earth Ponies still grow the food, which they provide to both the Pegasuseseseses (Yes, I stole that joke from Pinkie and no, I’m not sorry about it) and the unicorns in exchange for controlled weather and a basic day / night cycle respectively. However, despite this cozy arrangement, the three tribes view each other with animosity and hatred.

Unbeknownst to the three tribes, their mutual ill-feeling has attracted some weird flying horse spirit thingies, which create a protracted blizzard that threatens to starve / freeze them all to death. They set up a summit between the tribe leaders: Princess Platinum for the unicorns on behalf of her father, played by Rarity (the princess, not the father); Commander Hurricane of the Spartanesque pegasus race, played by Rainbow; and Chancellor Puddinghead of the earth ponies, played by Pinkie Pie.

The summit fails as each leader is unable to resist blaming the other races for the current predicament instead of trying to work out a solution. They each return to their associated underling: Clover the Clever (Twilight), Private Pansy (Fluttershy – a flower, not a tree, but close enough) and Smart Cookie (AJ) and declare an intention to break away from the other tribes and found a new land.

After some shenanigans, each leader finds Equestria and tries to claim it for their tribe, only to find the others there too. As they argue, the Windigos and their blizzard catch up to them, forcing them all to take shelter in a nearby cave. The close proximity only fuels their feud, and eventually the three leaders are frozen mid-rant (a power I wish I had, sometimes). This leaves their three assistants alone against the Windigos, whom Clover the Clever recognizes from a description given to her by a certain wizardly unicorn of some renown.

As the ice encroaches on them, the three find that they don’t share the dislike of the others that their leaders have, and forge a friendship, just as they too are covered by ice. Suddenly, magical fire appears from Clover’s horn. It unfreezes the three of them, and then immolates the Windigos in the most graphic manner, marking the first onscreen casualties of the show… if you consider the Windigos alive in the first place, of course. With the Windigos gone, the leaders unfreeze and have a change of heart, deciding to live in harmony from this time forth in their newly minted land of Equestria.

Back in the modern day, the Mane Six finish the play with a song, the audience joining in. As they congratulate each other backstage, the window flies open again, provoking another round of arguing. This is quickly ended when they hear a Windigo in the distance, reminding them of the perils of disharmony. Rainbow agrees to close the window, and everypony laughs as the Hearth’s Warming Fire burns brightly in the night.

Thoughts on the Episode
I do love that world building.

The most interesting part of this episode is to me is the dual nature of the narrative. In some parts, it’s clearly a play performed by the Mane Six, with stage props and painted scenery, while at other times it seems to be the actual historical events. Switching back and forth between the two is a very interesting way of telling the story, somewhat more ambitious than simply showing flashbacks, which is as far as previous episodes ever went. There’s even a rather meta joke thrown in, where Private Pansy declares “I can see my [Fluttershy’s] future house from here” while in the historical context, blurring that line just slightly.

When this episode aired, there was quite a debate over the flag seen at the end having a motif of the two Royal Sisters, who it was declared earlier were not yet in power. I don’t really understand why it’s a difficulty: you can also see painted scenery in the background, so it’s the play context we’re dealing with here, making that flag a mere modern prop. Sometimes this fandom can come up with some really convoluted theories to explain something that is really rather simple.

It’s interesting that Starswirl the Bearded was name-dropped as being a mentor of Clover the Clever. Quite how that ties into the timeline and the eventual arrival of the Royal Pony Sisters is currently unknown (and please, let’s not involve the comics in this discussion). Although I doubt the historical personages actually looked like the Mane Six, it’s possible that Clover the Clever is an ancestor to Twilight herself, and the fire produced by the three assistants is an early version of the Elements of Harmony. However, I find it unlikely that we’ll ever get straight answers to these questions, given that it’s been three seasons and the writers are all different these days. C’est la vie…

Ultimately, there’s not much more to say about this episode. As mentioned earlier, it’s a little disturbing to see the Windigos pretty much burn to death on-screen, as they do seem to be experiencing pain. They’re evil spirits, fair enough, but still, it’s quite graphic for a family show like this. There are no real flaws in the story itself that I think it can be marked down on, but I don’t think it does enough right to give it full marks.

Pros: World building. The framing for the narrative is ambitious and well done. A good song.
Cons: There are many unanswered questions, and presumably they will remain so. A rather disturbing “death” for the Windigos. That’s not how “I Spy” is supposed to be played.

Here endeth the lesson… feel free to comment below if you think I missed anything in this episode. It looks like the next couple of episodes are going to be pretty family based, with both the older and the next generations getting their turn in the spotlight, and I’ll be there to tell you what you should I think about it. Until then, take care and stay on the sunny side!