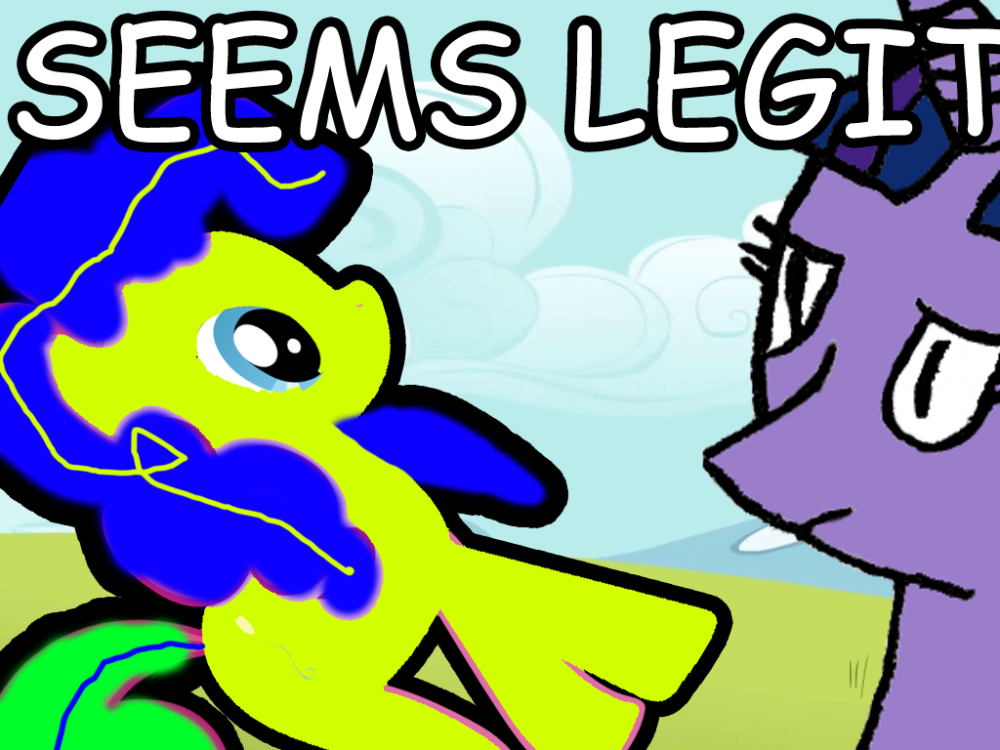 Another day, another entry, hmm? Well, that's what it seems like to me. How've I been? Oh, I've been alright. Staying up 'till 3AM working on assignments, getting into fights with chatroom "friends", and all that good stuff. Do I get a break? Yeah, sometimes. The cover for today was originally going to be a picture featuring a before and after photo of my collection since being a brony, but I'm going to leave that for October 15th, and for those who read "Grand Theft Applejack", will know that's my anniversary. Go me! You can expect a photo of the collection on that day.

Anyway, today's story is about pony mane styling. Now let me get this off my chest, I have a high respect for whoever can style hair. Sure, I don't like it when people touch my hair, but for those talented folks who can whip up something amazing with nothing more than a couple of combs and a pair of scissors, I tip my stat-track fedora for you guys. THIS ONE'S FOR YOU!

What's the first thing you do when you buy a brushable Pony doll? Criticize the bad packaging, seriously! Hasbro is the only big company who still can't pack their crap! Ahem, I'm getting off topic. The second thing you do when you buy a brushable? Hide it from your par- I mean, style the mane, probably. For those who hold pride in their collections, you're willing to go the extra mile to make sure your pony dolls are looking their best for your neighboring haters and disapproving fathers. I try to be the most "collective" brony a brony can be, (collecting merch, t-shirts, bedwear, stickers...) so I make sure my ponies are ready for the gala. The catch is that I can't style hair for crap.

But I don't give up! And being oblivious, I of course turned to Youtube, your daily dose of bad memes, commentary channels and, in my suggestions, terrible pony-tubers. (WHAT ARE THESE PEOPLE? UGH! They move ponies around a camera and make bad puns! UUGH! the mane styles are nice though.)
So I embarked on a journey to find the most informative, english-speaking, gentlecolt who could teach me his ways of conditioner.

I found him about two minutes later.

Turns out, it's like real hair with the exception of large clumps of glue stuck in both the mane and tail. Knowing me, I don't have a glue remover, so I just try to cut out what I can without leaving the mane maimed (they don't grow back). One of my biggest fails this year has to be in this moment; the moment where I'm scrambling around the house looking for the tiniest rubber bands man-kind has ever conceived. It took a good ten minutes, but I eventually resorted to pulling a few strings out of my dental cabinets. Y'know, I was supposed to apply these rubber-bands for braces, but I never got around to it. I guess they went toward a better use. . . pony dolls.

All in all, I think the mane styles went fairly well. I had bought two ponies (both Explore Equestria standard brushables), Starlight Glimmer and Applejack, and even though I copied everything the tutorial said, I believe I can rightfully be proud. After all, spilling conditioner on an expensive laptop while trying to perform major rubber band application is a pretty challenging feat.

So what did I learn from all of this? If you need hair bands for ponies, ask your doctor. Tell them it's congenital.