...Yeah....well, I didn't exactly plan to miss the last two weeks, but shit happens. At least I'm back now, and I intend on getting out three reviews today so that I can be all caught up with myself. What great fun for everyone. And just in time too, I suppose, since we've barely made it into season four. Ah, great, I can now officially say I've "binge watched" the show. Somebody kill me. So we just finished the "Princess Twilight Sparkle" two-parter, which was fucking epic. Let's see what other treasures lie ahead. This is "Castle Mane-ia!"

This episode opens up with Twilight searching through books trying to learn more about the secret chest that came from the Tree of Harmony. Aha, and the plot thickens! Then Celestia interrupts Twilight to send her to the old castle from that flashback where Celestia sent Luna to the moon in search of more information on the matter. There, Twilight finds a library, in which she explodes in glorious glee. My Equestria Girls PTSD is not completely repressed I see. Meanwhile, Spike doesn't like the place because spiders, but fuck him I guess. After the title sequence gives me tonsils in my asshole, we see Rainbow Dash and Applejack in the middle of a "most daring pony" contest. 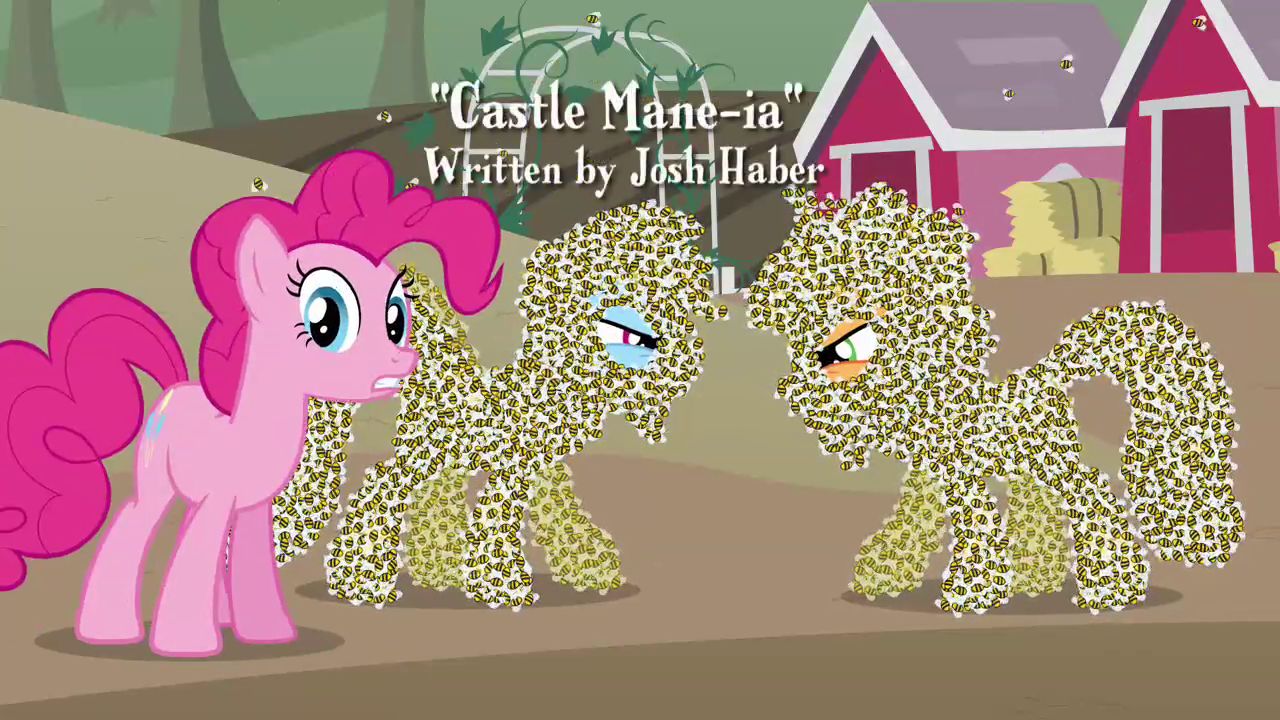 The Bee Movie but it's My Little Pony: Friendship is Magi-

N-n-noNONONO. You, you're not telling me, this is Josh Haber's FIRST EPISODE is it?!

God I miss doing these reviews.

Well, let's see if Josh Fucklord Haber manages to send me into hyperdrive this time. After the beekeeper commands his bees return to him, and Pinkie Pie trots off to ring the new school bell, Applejack and Rainbow Dash decide that to determine the most daring pony, they will venture in to the abandoned Castle of the Two Sisters...............which is where Twilight and Spike are.

Oh, and now where Rarity and Fluttershy are going there too in search of fabric. How convenient. I wonder how this story's going to end, huh? It's totally not predictable. So, let's see, whose story will we follow first? Ah, how about the slut and the tranny. There's a story that's sure to have a happy ending. The two of them find their tapestries or whatever the fuck you call them in a branching room, and Rarity asks Fluttershy to fly up and lift it off of its hook. In doing so, she activates a hidden door that separates the two. 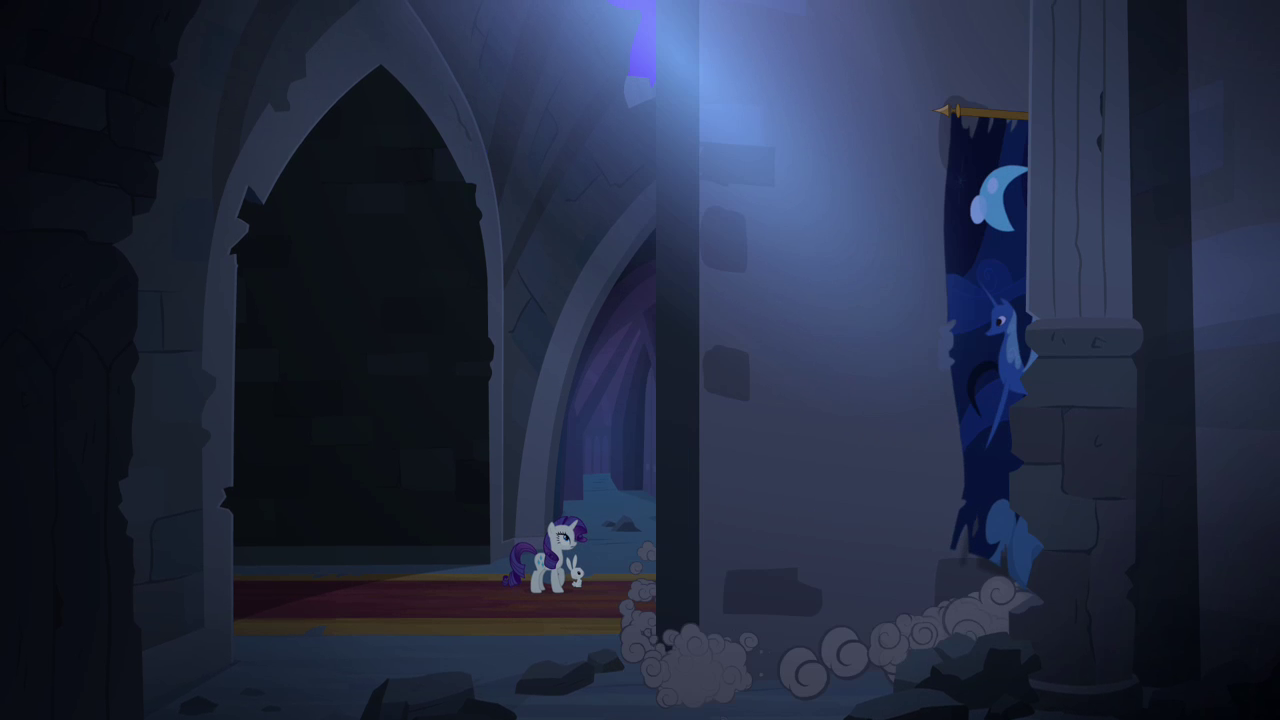 It's not the biggest thing Rarity's seen rotate vigorously.

In this instance, the rotating wall happens to turn in a room that Rainbow Dash and Applejack are in, and Fluttershy's frantic motions make them think there's really a ghost haunting the castle. Of course, the wall turns once more to return Fluttershy to Rarity, causing another problem altogether when its revealed she'd hurt her wing. A surprisingly hilarious dialogue takes place when Rarity explains that Fluttershy must've activated a secret door, to which she briskly and almost completely blankly replies "Oh, I'm sorry." It's the little things you know? Like Bill Maher's dick. Little things like that are hilarious. Anyways, while Rarity and Fluttershy fall in a hole, Rainbow Dash and Applejack try to prove to each other that their not scared of the castle, and Twilight and Spike continue studying. That's when Angel (oh, yeah, he's here too, refer to the above screencap) comes into Twilight's room and inadvertently opens up another door which reveals the Journal of the Two Sisters. Jesus Christ, there's the Castle of the Two Sisters, the Journal of the Two Sisters. What's next? The Cup of the Two Sisters?! 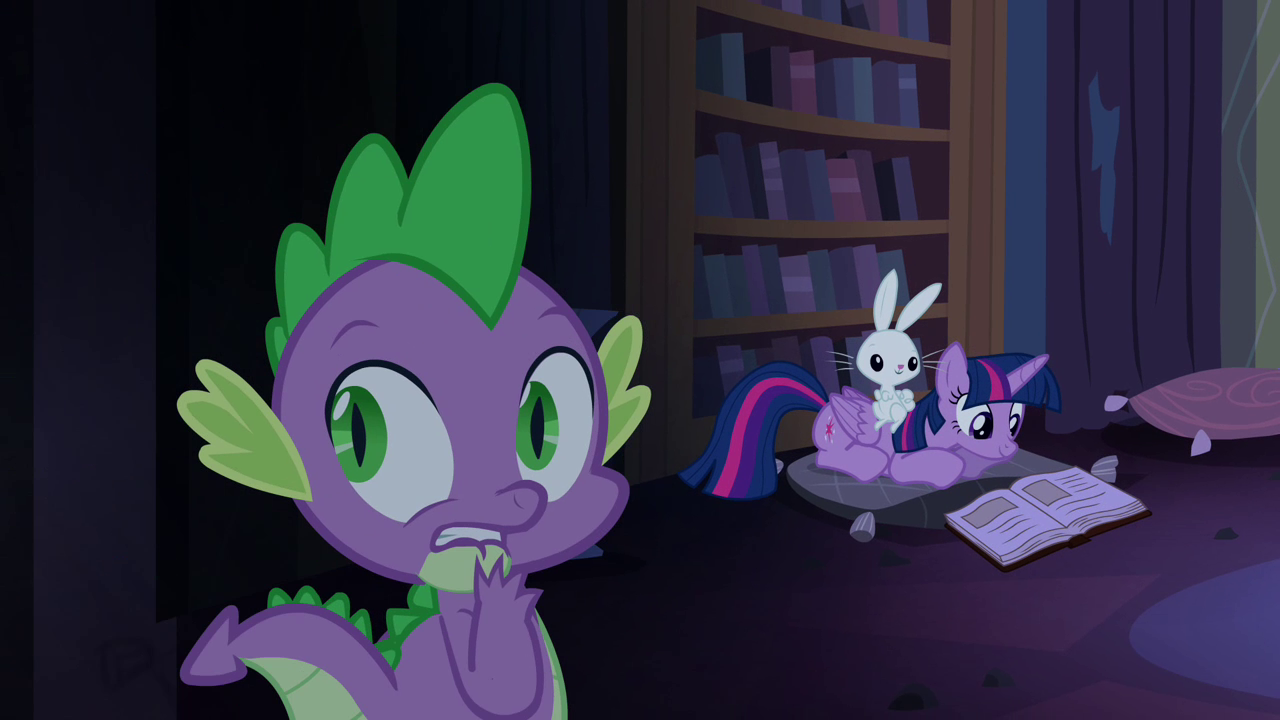 It's okay, Spike. We'll get through the fanfics together.

So while Fluttershy and Rarity try to figure their way out of the hole, Applejack and Rainbow Dash bicker as the walk through a hallway of hanging, disembodied pony legs. That...actually is creepy. Imagine if there was a hallway with a bunch of severed human legs hanging off the wall. That's fucked up. This episode just received some macabre points. As Rarity sticks her hoof through a hole (heheh) which happens to touch Rainbow Dash in the creepy hallway, both ponies are spooked by their contact and assume "ghost". Then Fluttershy finds the lever that switches them out of the hole. Great. Anyways, there's this great shot in the middle here where it shows Twilight and Spike on one floor, and then the camera pans down the next floor where Fluttershy and Rarity are briefly seen walking along before it pans down to the next floor, which shows a mysterious figure playing a pipe organ that Applejack and Rainbow Dash walk by. A predictable structure this episode might have, but it sure has quite a few interesting overlapping plots. Maybe this episode isn't too bad? We'll see when it's over. For now we have to watch the pipe organ trigger SJWs and boobie traps throughout the castle, sending many of our main characters astray. 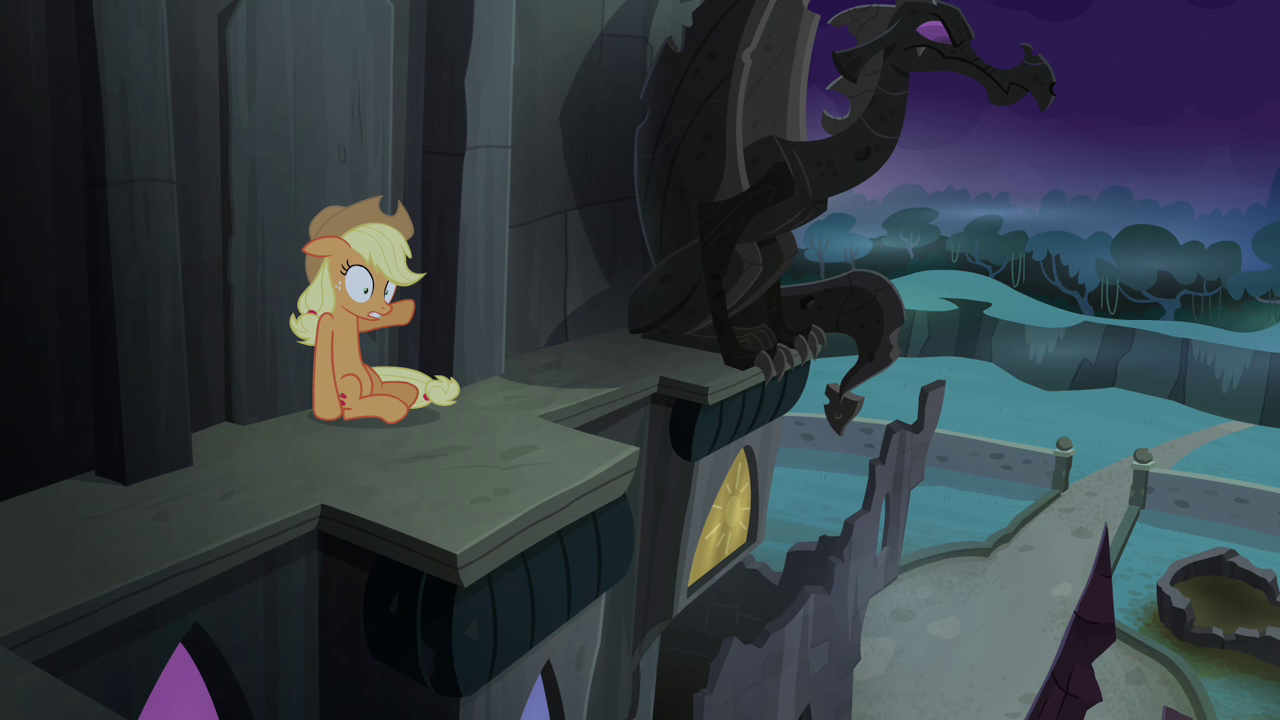 So, I normally go through what subplot is going where, but this late in the story, there's a lot of shit happening at once. Rainbow Dash getting crushed by armor and running off, Applejack going down a dark staircase, Rarity tumbling around, Spike shitting himself, Fluttershy looking for angel. It's just chaos. Let's just skip all the shit and say everyone get's fucking lost, fed-up, and curious, emotionally torn apart, and on the brink of suicide, but they all end up in the middle of the castle in hysterical panic. Then Twilight comes in and freezes everyone and tells them all to STFU, 'cause she's a princess now, and she can do that authoritatively. At this point, they all hear the pipe organ playing and decide to investigate. When they do, they find out that the mare behind all the mayhem was Pinkie Pie. Praise her. 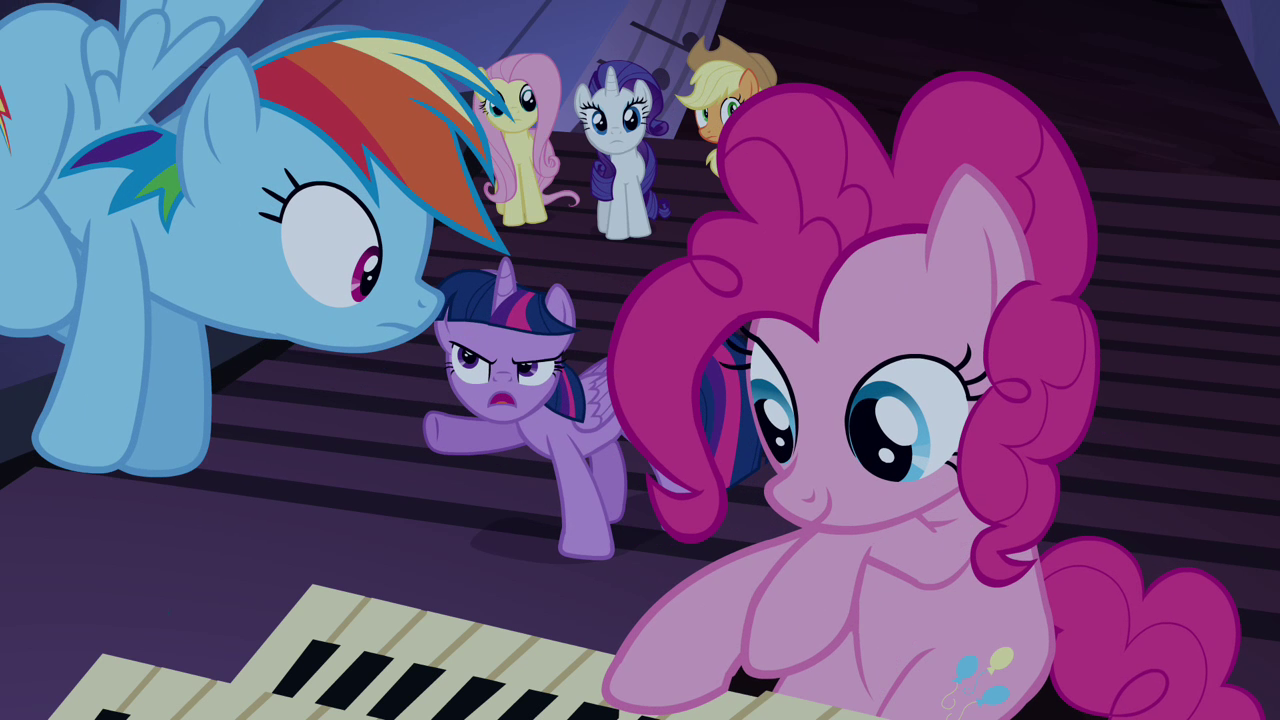 Well, maybe you can trigger boobie traps with that organ, but can you play "Gangnam Style"? That's what I thought, bitch.

After Pinkie Pie spouts out her convoluted explanation for being in the castle, they all go back up to the room Twilight was in to recover. There, she explains that reading the journal about the past helped her keep a level head in regards to what was happening in the present, which is complete bullshit, but I digress. Twilight comes up with a great idea. They should keep a journal about their adventures, so that they can learn from each other and someday somepony else can learn from them! What a fantastic idea that could lay the foundation for a grand legacy for our main characters. Just one problem; what the fuck ever happened to that. Like, I fucking remember in season four they had that going for a little while, but then, to my recollection, it disappeared off the face of the goddamn earth, never to be mentioned again. I can't even find out on the wiki what happened to it. It makes an appearance in the first part of the finale, but after that it's all abandoned, and I don't remember it being in season five at all. What a shame. 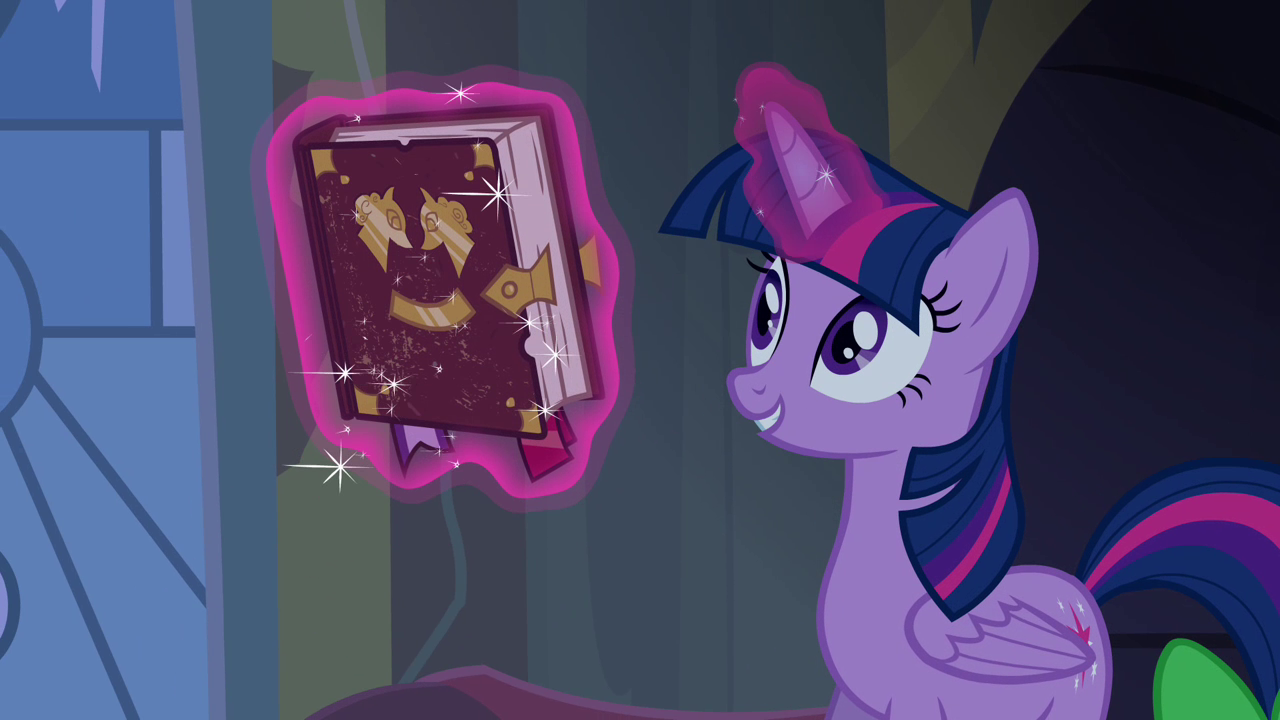 About as unimportant and unmemorable as a Rolling Stones record.

And so concludes "Castle Mane-ia".

The beginning and the end of this episode did not impress me. In the beginning, I could smell the ending coming a mile away, and in the end, I was unmoved by Pinkie Pie's phoned-in explanation for being a part of this plotline. However, I don't think this is a bad episode. Quite the contrary. Yes, the structure was predictable, but everything in between was fucking exhilarating. Watching each of our characters arrive at this shared location in pairs and then slowly be split apart and reconnected one by one until they all regroup was this really gripping ordeal that I didn't expect to be so engaged in. To me, the episode ended when they all got together, because then I knew what was to come. Not even the Friendship Journal proposal satisfied me since I know it was completely scrapped after this season. Still, the interconnected plotlines I find immense interest in even to this day, so I think the whole episode balances out to roughly an 8/10. Geg.

Okay, so that's one down and two to go. The next episode on the list is "Daring Don't", which would've been last weeks review. Will it continue season four's so far consistent quality, or will it crash and burn in a fiery inferno? I sure hope it daring don't.........'cause I'm fucking tired and I can't be bothered with a shit episode. Tune back in a few hours for the continuation of...