What's up, everypony? Woohoo here and welcome back to Musical Manslaughter, because you can't spell 'slaughter' without 'laughter' and these songs are jokes.

Hope you all enjoyed your Fourth of July, because there's no better way to celebrate our independence than gorging ourselves with hot dogs, guzzling down beer, and blowing up fireworks.

Anyway, on to the blog. So with the previous entries, I tore apart a couple of popular songs from the current decade. Now there are plenty of songs from this decade I wanna tear into, but if I continue in this direction, I'll eventually get a comment like this...

Your such a nostalgiatard! You hate music now cuz it's modern and not from your precious childhood. Your jealous cuz singers like T-Swizzle are rich and famous and your not. Your probably one of those dumbasses who say there born in the wrong generation! Grow up you aspie neckbeard and enjoy teh music >:(

OK, extremely over exaggerated but you get the idea. I am not one of those people on YouTube who post comments like "I was born in the wrong generation," "Music was soooo much better back then," or even "[Number of Dislikes] are Bieber Fans," etc. Despite all the crazy shit going on now, I actually prefer living in this generation.

For this entry of MMS, we're doing something a little different. I'm going to take you back to the past... to shred a shitty song that sucks ass. A song from a magical time called the 1970s, where the only ways to access music were the radio or buying the album at a record store. Now this particular song has irritated me for a long time. A song that I have loathed for most of my life, as early as nine years old... and that song is "American Pie" by Don McLean.

Now I bet you're wondering, "How can you hate this song?! You're a traitorous socialist fascist commie terrorist if you hate this song!" OK, how am I all of those things for hating a song?! Wait, why am I responding to my exaggerated hater comment?! Let's get back on topic... so why do I hate this iconic song? Let's break it down.

Unlike the last two songs I reviewed, which started off with either a sickeningly obnoxious beat or the worst chorus in music history, "American Pie" actually starts of quite nicely with a soft piano melody and its first verse...

A long, long, time ago, I can still remember how that music used to make me smile

And I knew if I had my chance, that I could make those people dance and, maybe, they'd be happy for a while...

Kinda like how I used to somewhat enjoy this song. However, after these couple lines, things start going downhill.

But February made me shiver with every paper I delivered

Bad news on the doorstep, I couldn't take one more step

But something touched me deep inside, the day the music died...

Now we've reached my first major problem with this song, the line "the day the music died." Does this song even explain what it is? Nope. Alright, since Donny's not going to explain what it is, I guess I'll have to. Gather around, it's time for a little history lesson with Woohoo... 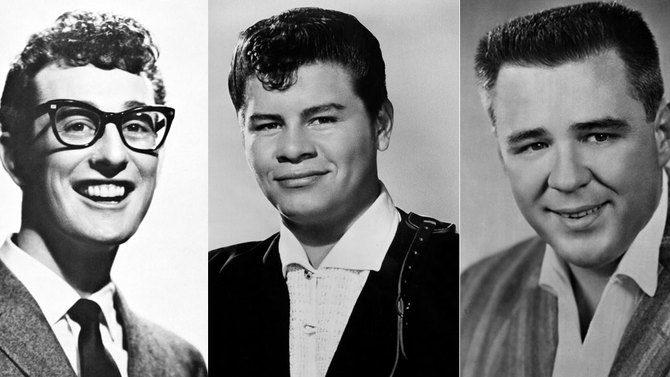 On February 3rd, 1959, Buddy Holly, Ritchie Valens, and J.P. Richardson (aka The Big Bopper) boarded a plane in Mason City, IA en-route to Fargo, ND. Tragically, not long after takeoff, the plane lost control during a winter storm and crashed into a nearby cornfield, killing all three musicians and the pilot. To many people, this was a significant loss for the music industry as all three were prominent figures in the early days of Rock n' Roll. Do you want to know where did the name "The Day the Music Died" actually came from... the song I'm ranting on now! Thanks to "American Pie," which came out over a decade after the tragedy, this event is now known as the "The Day the Music Died." Now I usually save "Unfortunate Effects" until the end, but... WHY!? That's so ridiculous! I know their loss was tragic, but with a name like "The Day the Music Died," it just implies that all music died with them. Music can never die, it may have been wounded on that day, but it will never die... only the people who create it can. And why stop at "The Day?" Let's call last year "The YEAR the Music Died" due to how many famous musicians died then!

Great, I'm already losing my sanity and I haven't reached the chorus yet. Speaking of which, the chorus is up next...

Drove my Chevy to the levee but the levee was dry

And them good ol' boys were drinkin' whiskey and rye

Singin' "This'll be the day that I die"

This'll be the day that I die

I mean, seriously... what the hell does all that stuff have to do with this musical tragedy?! This chorus is absolutely nonsensical! I... I don't think I can comment any further... except maybe there's some deep psychological meaning hidden there, but I'm not going to waste my damn time trying to find out what it is...

Speaking of time wasted, that goes into my next major problem, and probably the biggest problem with this song. It's... so... fucking... loooong! This song is a whopping eight minutes and thirty seven seconds long, the longest song ever to hit number one on the Billboard Hot 100, and it's nothing but verse-chorus-verse-chorus and so on. There are no bridges, no solos, no time changes, and not a single instrumental section longer than a few seconds to break up the monotony, it's just lyrics. Sure, the tempo changes slightly after the first chorus, but that doesn't change either! It's definitely one of those songs that tricks your brain to thinking it might be over, but nope, it keeps going on and on and on... There's a certain word to describe this song. Take it away, Pinkie!

Now you're probably thinking "Oh, you just hate long songs! You must have ADD or have an attention span of a squirrel!" That's not true. I love long songs when they're done right. "American Pie" is an example of a long song done wrong. There are many long song I enjoy eons more than "American Pie," some are even longer than longer than this festering pile of boredom. Here are a few examples that I like:

...And many more. As for the rest of the song, the lyrics just sound like rambling. While some lyrics relate to the subject, which I think is rock 'n roll, but then you get lyrics that are completely nonsensical, like this verse...

But, that's not how it used to be
When the jester sang for the king and queen
In a coat he borrowed from James Dean
And a voice that came from you and me
Oh and while the king was looking down
The jester stole his thorny crown
The courtroom was adjourned
No verdict was returned

You know what? I'm just gonna wrap things up before I lose anymore of my surviving brain cells.

And that was "American Pie." Do I still hate this song? Absolutely! In fact, I hate this song even more as an adult than when I was a kid. Here's why...

The lyrics, for the most part, are confusing, nonsensical, and have as much correlation as New Kids on the Block and Chinese food. While the vocals and music of this song are way better than the last two songs, because it's dragged on for over eight minutes, it makes the song irritating to me. Why they made this song so damn long, I'll never know. As I stated early, I've hated this song since I was nine, mostly due to hearing this song on the bus home almost every week during fourth grade. It doesn't help that fourth grade wasn't a very good year for me so this song does trigger some bad memories. I found this song nonsensical as a kid and I still find it nonsensical now. Maybe I'll get it better when I'm 40. I still don't get why this song is so popular... maybe it's because 'Murica.

Now for the final score. 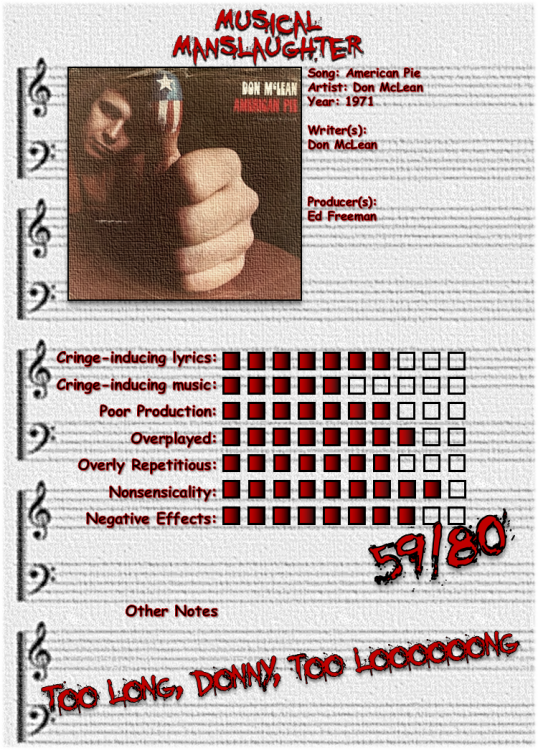 That concludes this entry of Musical Manslaughter. This one was a lot more detailed than the previous entry since I had more history with this song. If you like this song, that's fine, I won't hate you. For my next song, we're going back into the past again, but not too far, to shred a terrible song by an artist I actually like.. and going to see them live really soon.