What's up, everypony? Woohoo here and welcome back to Musical Manslaughter, because you can't spell slaughter without laughter and these songs are jokes.

This entry will be a little different from the last ones. With the previous entries, I tore apart songs from artists that I either dislike or don't care about. For this entry, I'm tearing into a song from an artist I actually like. Normally I talk about the artist after I present the song I'm reviewing, but like I said earlier, this entry will be different. If you can't tell by the font I used in the logo, the artist I'm talking about is Metallica.

These guys need no introduction. They're arguably the most successful heavy metal band of all time and also one of the best selling music artists ever. I, myself, am a pretty big fan of the band for about a few years now. However, just because I'm a big fan doesn't mean I support everything the band does, and frankly, Metallica has done a few... questionable things from the mid 1990s to the early 2000s that have disillusioned most of their fans, such as releasing albums with bodily fluids as the front artwork, cutting their hair and dressing up as Cuban pimps, and their infamous lawsuit against Napster. For this entry, I'm talking about one particular song they made in 2003, which is the title track of their infamous eighth album... St. Anger...

Oh boy, this will be fun. I've been wanting to rip apart this song for a long time... Before I tear this song apart, I just want to tell you that I actually wanted this song to be the first entry of Musical Manslaughter, that is until I heard "Shake it Off" on the radio... Alright, enough of my shuckin' and jivin'... Let's break it down...

Believe or not, my first problem with this song is the title. "St. Anger?" Last time I checked, Anger is one of the deadly sins. Putting Saint and Anger together makes it sound like an Oxymoron. How the hell did they come up this? Did they draw random words from out of a hat or did they have help from some Manatees... Great, I'm already losing it and I haven't even started the damn song... Anyways, onto the song.

Like with most Metallica songs, this song starts off with a riff. It's not one of their best but it's somewhat tolerable... so long as James doesn't say "this sick riff." So far, it doesn't seem too bad... that is until you hear this...

What in the name of Heaven, Hell and everything in between was that?!

Seriously, what was that sonic shitfest of a sound that had the displeasure of assaulting my eardrums?! Is that the sound of all encompassing negativity pounding through the fabric of space and time?! Maybe... you wanna know what that sound really is? It's the sound of the snare drum! 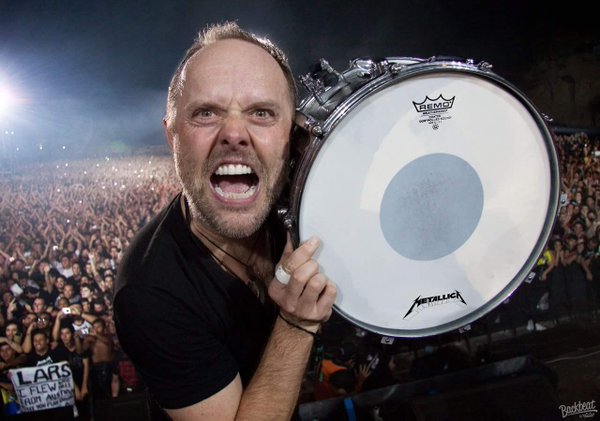 Now you're probably wondering 'why does the snare sound so bad?' It's because during the recording of this album, Lars Ulrich turned the snare off of his snare drum, giving it a much louder ring. Apparently, Lars liked the sound of it so much, he decided to use it on the album. Uh, Lars, I have a quick question for you...

Why would you do this, Lars?! Your snare is so loud and jarring that it distracts from the vocals and other instruments! It almost sounds like you're drumming on a cooking pot! This is just so... what's the word I'm looking for? I know, unprofessional! So after 30-something seconds of incessant instrumentation, we finally reach the lyrics...

He never gets respect, Saint Anger 'round my neck...

Uh, James, who is this St. Anger? Why is he around your neck? Is he choking you because you disrespected him? Can anybody explain what's going on here?! I have a feeling this song will score really high on 'nonsensicality.'

So... to get rid of St. Anger, you have to flush it out? Like a turd? I still don't get it! Why are these lyrics so damn cryptic?! Also, James, why are you trying to sound like Chester Bennington? Why not sing "Craaaawling in my skiiiiin," while you're at it. Ugh, this song is making my head spin... like Peridot stuck in a toilet.

Fuck it all and no regrets, I hit the lights on these dark sets

Fuck it all and fuckin' no regrets, I hit the lights an these dark sets

Medallion noose, I'll hang myself, St. Anger 'round my neck...

Believe it or not, I consider this moment to be the "highlight" of the whole song... and I use the word "highlight" very loosely. Mainly because it references the lyrics of two classic Metallica songs, "Damage Inc." from Master of Puppets and "Hit the Lights" from Kill 'em All. However, those references will not save this song.

Hard to see clear, is it me? Is it fear?

Wow... just wow... I can't believe how much the band has fallen lyrically. This is almost "Shake it Off" level nonsensicality. And to think this song came from the same band who wrote classic songs like "Master of Puppets," "One," "Fade to Black," "Enter Sandman," etc. Maybe the next verse might be better...

Saint Anger 'round my neck--

Wait, didn't we already hear this verse?! You mean to tell me that you couldn't think of another verse so you decided the first verse all over again?! It just makes me wonder what was going on at Metallica HQ during that time. As it turned out, 2001-2003 was a very tumultuous time for the band, to the point where they almost broke up. Many factors, including the departure of longtime bassist Jason Newsted, James Hetfield going to rehab as well as rebuilding his relationship with his family, and their lack of any pre-written material set the stage for this monstrosity. James Hetfield later said the album's sessions were so open-minded that they became unfocused and they pretty much embraced every dumb idea so no one's feelings would get hurt. I guess that explains the ridiculous songwriting here. This whole period was documented in the 2004 documentary Some Kind of Monster. 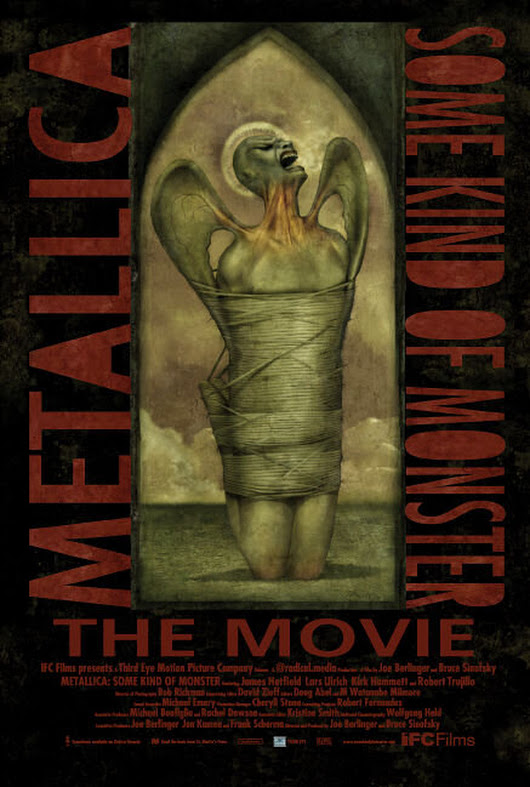 Now let's get back to the song. Like I said earlier, we get another repeat of the first verse and chorus... actually, no, it's just one big chorus. Usually after the second chorus of any Metallica song, there would be a guitar solo from Kirk Hammett, right? Right? Nope.

Turns out, there are no guitar solos anywhere on this song or on the entire album. Not a single tap of the Wah-Wah pedal or a twitch of the Whammy bar from Kirk, none. A lot of people were upset over the lack of solos when this album came out. As for me, I'm not that upset but a solo would've been nice to break up the monotony.

That's another thing wrong with this song, it's long. Granted, it's not as long and boring as "American Pie" but "St. Anger" is even more irritating. It's seven and a half minutes of Lars playing a pot, incessantly repetitive riffing, and cryptically ridiculous lyrics.

Now I get it. This song is about setting your anger free in a healthy way. Kinda like how I'm setting my anger free through this blog. One thing, why you gotta be so repetitive? I think now's the time to wrap things up.

That was "St. Anger" by Metallica. Do I hate this song? As James would say in the old days, Abso-fuckin-lutely! Here's why...

The lyrics, music, structure, and production are just... *sigh* They take horrendousness up to 11, not just by Metallica standards, but music standards in general. I mean, turning off the snare? What was Lars thinking?! In terms of repetition, it's pretty high. Hearing the same long verse twice in a row is such a chore to sit through. Meanwhile, the title of the song was used 13 times while the word 'anger' by itself was used 37 times. Granted, it's merely half as repetitive as "Shake it Off" but that's quite repetitive for Metallica. While this song has had no negative effects on me (aside from the annoying pong-pong), it had some on the band. When the album came out in 2003, despite debuting at number one on the Billboard and winning a Grammy, it garnered a lot of harsh criticism from critics and fans alike, calling it one of the worst albums ever made.

However, on a more positive note, Metallica emerged a healthier and stronger band afterwards. James Hetfield described the St. Anger album as a purge, getting all the negativity out of him and a catalyst for the next chapter of the band. Thankfully, they've made great albums again with Death Magnetic and Hardwired to Self Destruct... well at least in my opinion.

Now for the final score. Some categories went up to 11, they're that bad. 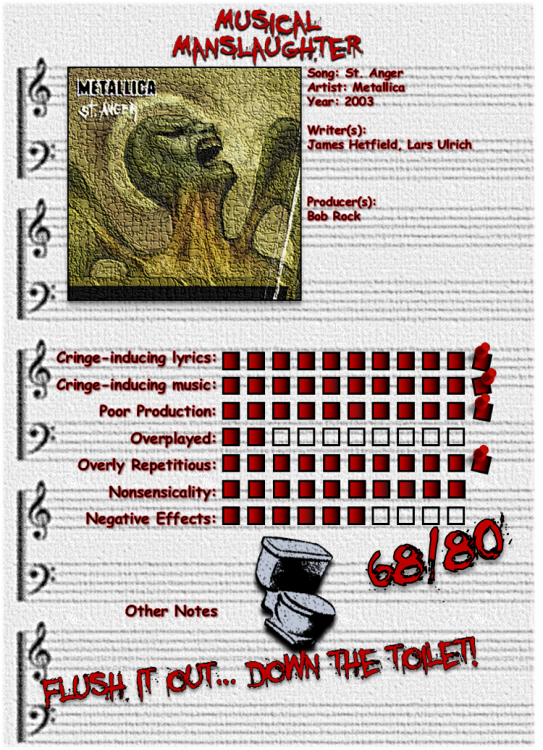 And that concludes this entry of Musical Manslaughter. For my next entry... I don't know what I'm gonna do but I'll think of something... maybe...