The episode opens with Applejack racing around a rodeo course set up on her farm, while Apple Bloom cheers her on. During her jump over one of the fences, her hoof just clips the obstacle, unnoticed by AJ herself. She finishes by tossing a bale of hay, to applause from her little sister. Apple Bloom is enthused and gushes about how good AJ is and how she’s certain to take first prize at the Equestrian Rodeo.

But AB isn’t the only one with expectations… Ponyville is organizing a grand send-off for their potential champion, and RD is helping put up the banner, with “assistance” from a certain blonde, grey-coated pony with bubbles for a cutie mark. Just managing to dodge a bolt of lightning, RD utters the historical line, “Now, careful, Derpy!” Said pony is jumping up and down on a cloud. She leaves off with that, but her clumsiness makes trouble for RD as well as damaging Town Hall further than the lightning did. Despite the setbacks, AJ manages to thank Mayor Mare and the town for supporting her, and pledges her winnings to help make repairs, before setting off on the train to Canterlot.

A while later, and the Mane Six and Apples are waiting to surprise AJ with a Congratulations party. However, she doesn’t show, instead sending a telegram to say she’s delaying her return. The Apples are distraught, but our heroes vow to find AJ and bring her back.

They proceed to Canterlot and ask around at the rodeo grounds as the rodeo crew pack away, and eventually, they are pointed to a town called Dodge Junction. On arrival, Pinkie needs a tinkie, and manages to find AJ almost immediately when she races to the station outhouse, catching her just coming out. (Is this the first mention of such necessities in the show? I think it is, but feel free to contradict me in the comments if I’m wrong.)

Applejack is less than enthused that her friends have tracked her down, and she tells them that after the Rodeo, she decided to spend time in Dodge Junction for a change of scenery, and to farm something other than apples, namely cherries. They meet with AJ’s new boss, Miss Cherry Jubilee, who speaks of AJ winning so many medals at the Rodeo that Miss Jubilee offered her a job on her cherry farm.

AJ entreats the others to return to Ponyville, but they refuse, suspecting that there is more to AJ’s decision than she is letting on. They take jobs sorting cherries as AJ works the conveyer belt, and make small talk in order to persuade AJ into revealing her secret. She won’t budge, however, and starts trotting too fast in agitation, leaving Pinkie and Fluttershy increasingly overwhelmed by the rate of cherry arrival. When Fluttershy desperately yells for her to stop, all the cherries end up flying at AJ, covering her completely in pulverized cherry. 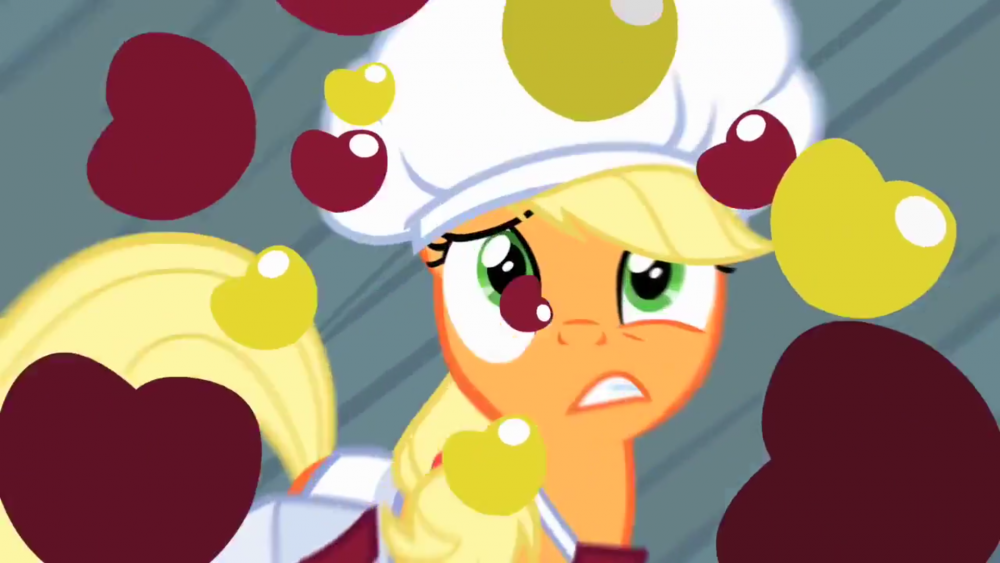 Momentum is a harsh mistress…

She leaves in a huff, and the rest decide they need to stop pulling their punches; cue a staggered zoom cut on Pinkie Pie...

In the orchard, AJ is bucking down the cherries, and Pinkie comes to help. After a while, she starts to talk, and just doesn’t stop. Eventually she wears AJ down, and she agrees to tell the Mane Six what the truth of her situation is, but asks if she can put it off until breakfast tomorrow. They acquiesce, on condition that AJ makes a Pinkie Promise™ on it, which she reluctantly does.

The following day, AJ is nowhere to be found. Pinkie, furious at the broken Pinkie Promise™, leads the charge to find her. They catch up with her at the station, forcing her to flee in a horse drawn carriage. The Mane Six load up in a cart pulled by RD and Fluttershy and give chase. Pinkie manages to leap onto AJ’s carriage and demands an apology for the broken Pinkie Promise™. AJ claims she didn’t technically break the promise, since she specified “at breakfast”, to which she never went, unable to face the prospect of revealing what actually happened to her. Pinkie accepts her half-apology for the time being, and leaps back to the Mane Six cart, knocking Rarity and herself out. They are left behind as RD can’t waste time turning around to retrieve them. 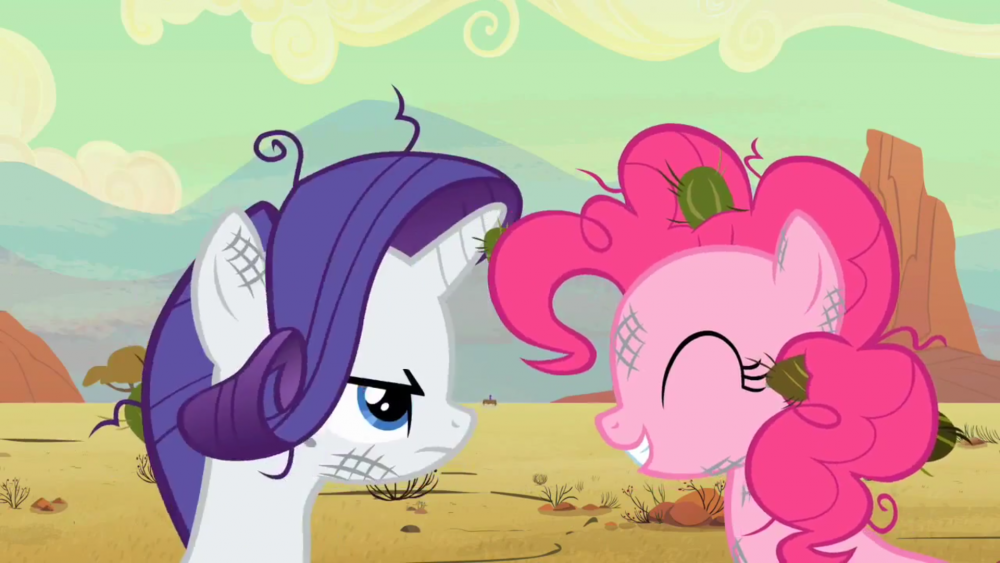 Well, Pinkie, here’s another nice mess you’ve gotten me into.

AJ decides to cross just in front of a train, hoping it’ll cut off the Mane Six Three cart. At this, the team pulling her carriage abandon her for endangering them. AJ turns back to gloat about her escape, but RD and Fluttershy just fly the cart right over the still passing train. AJ tries to run, but RD tackles her, knocking her bags open and sending all her medals flying. AJ finally tells them the truth: she won many medals, but none of them were first place. She also didn’t win any prize money. Feeling like she let Ponyville down, she wanted to work for Miss Jubilee to earn the money instead. Fluttershy and Twilight assure her that having her home means more than having her win or bring home a prize. Even RD can’t quite maintain her stoic exterior.

Applejack goes home to meet her family and in voiceover, gives her friendship lesson report: Winning isn’t everything, and your family will love you regardless.

Meanwhile, Rarity and Pinkie are heading home via handcart, Pinkie talking all the way. Rarity is not happy, and intends to give RD a piece of her mind when they get home.

Thoughts on the Episode
This used to be my favorite episode. I still like it a lot, but there are better episodes since. Let’s get the home-invading pachyderm out of the way first. This episode led to an unpleasantness that would come to be known as Derpygate. Basically, in the wake of the episode, there were scattered complaints about the portrayal of Derpy, claiming that it was offensive to the differently-abled, which lead Hasbro to change the scene. The RD line naming her as Derpy was removed, her eyes were slightly straightened, and all of her lines were redubbed. This was despite the fact that there were many more positive reactions to Derpy’s canonical inclusion, including from many differently-abled fans themselves.

For myself, I definitely understand the anger and frustration of Derpy’s fans. While I think the new voice for Derpy (yes, I’m still considering it her name – it was broadcast originally as that) suits her better – and better matches her earlier line in Applebuck Season – removing the name and altering the eyes are not changes I support. As is so often the case, the vocal minority get their way. I’m sure they thought they were doing the right thing, but that doesn’t mean it was. Slice of Life went so far as to credit her as “Muffins” instead of Derpy. There is a certain amount of sense to such moves, however it might rankle. Hasbro want to protect their image, and to that end, they sided with the seagulls. It would have been more admirable if they had had the balls to stick to their guns, though. (Pardon the mixed metaphor there.)

Moving on, this episode offers a lot of entertainment. There are a number of lovely minor touches. First, for Applejack: the fact that she didn’t have a perfect run on her own farm hints towards her falling short of first place. Quality foreshadowing, that. Then there’s the bit where AJ thinks the train is going to stop the pursuit… if you look carefully, you can see past the train where Twilight just tilts her head slightly, as if to say, “You’re kidding, right?” just before RD and Flutters fly over. AJ’s expressions are great too, from her pleased but embarrassed blush at being complimented, to her stubborn “you ain’t getting nothin’ out o’ me” face. She also delivers some great lines, especially at the end. She just sounds so frustrated and dejected over her lack of a first place finish, you really feel her pain.

Pinkie also gets in on the act, so much so that this is almost a Pinkie episode. Her antics while holding it in are a rare example of good toilet humour (What? It’s not quite an oxymoron; that style of humour is hard to pull off well, but not impossible.) There’s also that ominous zoom-in on Pinkie along with “dun dun dun” music, contrasted as it is with the cute and silly image of her licking up some spilt cherry pulp. Not that it isn’t justified, since she shows that her prattle can be weaponized, although her dialogue is pretty funny on its own. But perhaps the best part is her nonchalant “Rarity catch me!” line as she leaps backwards at an entirely unprepared Rarity… watch out for Twilight’s duck, it’s awesome.

Some other good points: Cherry Jubilee has a great design and voice, and seems really nice all around. The poor mailpony gets snubbed by Twilight, but at least he gets a slice of cake courtesy of your friendly neighbourhood Pinkie Pie. Some great lines, apart from those already mentioned, also stand out.

In summation, there's a lot of good in this episode, and not all that much that is bad. I wish the original version had been kept, but even with that caveat, this episode is just really entertaining and on point for all the characters.

Anything Pinkie does in this episode.

The end scene is pretty hilarious, with Rarity darkly swearing some sort of revenge for RD for abandoning them, while Pinkie just keeps repeating her cherry product names.

Pros: Pinkie is hilarious. Very good Applejack expressions and line delivery. The small details just add so much.
Cons: Derpygate… which is not a con for the episode itself, so it doesn’t affect the rank! Neener, neener!

Final Rating
5
– Blue Ribbon Rank: A real winner. It will be re-watched frequently.
4 – Red Ribbon Rank: A very good attempt, but falls just short of glory.
3 – Rodeo Clown Rank: An average episode, assuming you don’t have coulrophobia. Not bad, not great.
2 – Cherry Rank: Nice once in a while, but too much may make you ill.
1 – Calamity, Mane Rank: Fails at the first hurdle.

From an AJ episode, we change tacks and charge straight into... another… AJ… episode……. huh. At least the rest of the Apple family gets more screen time in this one. Plus new villains will be introduced… we may be in trouble! Nonetheless, nothing can stop the Smooze nitpicking! Join me for my next review… Super Speedy Cider Squeezer 6000. Until then, comment if you wish, and as always, stay sunny side up!