Girls, can you explain why I look like I’m getting married at the bottom of a pit? – Cheerilee

Hearts and Hooves Day (the Equestrian version of Valentine’s Day) has come to Ponyville, and love is in the air. Sweetie Belle, Apple Bloom and Scootaloo are busy creating a giant greeting card to give to their teacher, Miss Cheerilee. This construction involves large quantities of paper, lace, glitter and paint. Despite the rather haphazard method of its creation, the finished product looks oddly professional… and far too large to fit into the envelope.

At school, Cheerilee thanks the girls for their gift. Sweetie surmises that she must have gotten an even better present from her “Very Special Somepony” but Cheerilee reveals that she is currently single, stunning the fillies. Despite their protests (and a rather put-upon expression from the teacher), Cheerilee insists she is content with her romance situation, and that the good wishes from her friends and students is enough for her. 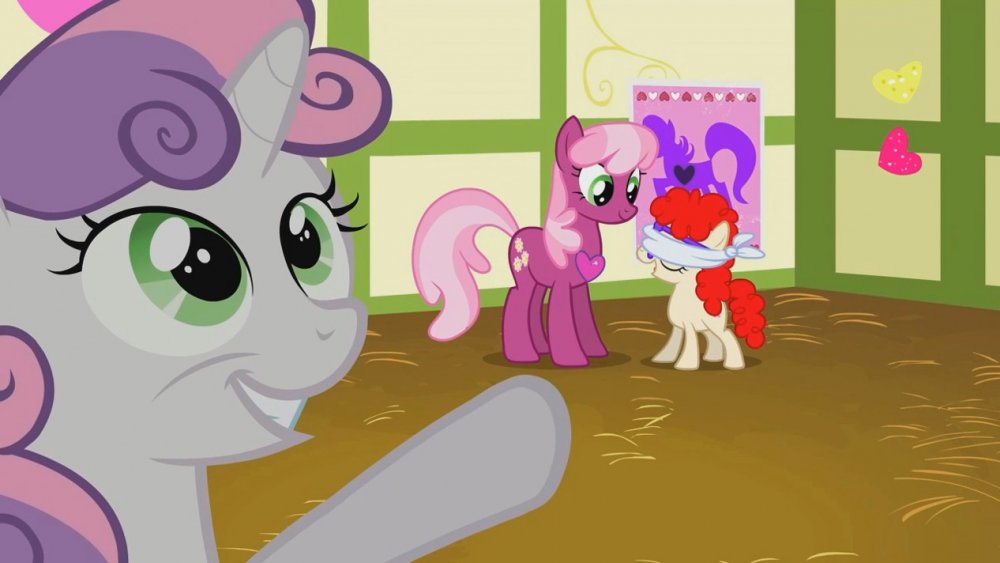 Sweetie decides the Crusaders should take it upon themselves to find a worthy stallion to be Cheerilee’s VSS, and they quickly head out into Ponyville to find the perfect match. Their search takes the form of a song, sung mostly by Sweetie herself, as they consider and ultimately reject all of Ponyville’s single stallions left and right. There are a few noteworthy images during the song. (Oh, hai, inspiration for Button Mash) Including the first outright acknowledgement of death in Equestria… yup, the “too old” pony is a priest officiating at a funeral: you can see the casket on the right of the screen. The other rather noteworthy entrant in the potential partner pageant is the stallion who is “too strangely obsessed with tubs of jelly”.

Eventually, they come to Big Mac, who they find doesn’t have any plans for HnHD, and decide he will be the one. Apple Bloom points out that Big Mac is shy and probably wouldn’t make the first move on Cheerilee. They then decide to set up a picnic at the gazebo, to set the mood and get Cheerilee to make the first move instead.

After the picnic is all set up, Cheerilee appears. The girls had brought her out, saying they need help with identifying a tree… an apple tree. Cheerilee is understandably confused. Just then, Big Mac also arrives, having come to fix the gazebo. The fillies then try to leave them alone, hiding in the bushes. Cheerilee looks long at Big Mac, leans in, and they think their plan is working… only for Cheerilee to point out something stuck in his teeth. “Oh, come on,” indeed, Sweetie Belle. Bonus points for the record scratch. The music sounds distorted afterwards, too.

The two then head off in opposite directions, leaving the fillies flabbergasted by failure. Cue Twilight… who bumps into them while reading a book. She mentions that the holiday was started by a love potion, piquing the attention of the CMC, who borrow the book and then book it before Twilight can recommend any other reading material. She is not pleased.

The CMC prepare the potion, and again call out Big Mac and Cheerilee, passing the potion off as punch they want the two to taste test. Cheerilee explains to Big Mac that she’s entirely aware that the three fillies are attempting to set them up, but they decide to humour them anyway and drink the “punch”. 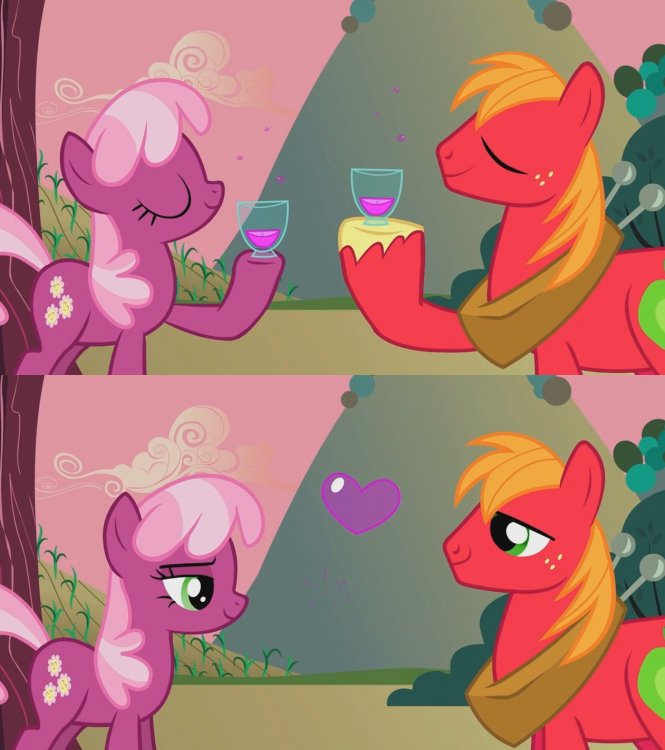 The delight of the CMC at their plan coming to fruition is quickly cut short by Cheerilee and Big Mac becoming Sickenly Sweet Sweethearts, complete with baby talk and pet names. At least Big Mac is saying more than his customary "Eeyup" and "Nope". On the other hoof, given what he is actually spouting, maybe that would have been preferable.

Thoroughly weirded out by the lovebirds, as it were, the CMC retire to their club house to found out what went wrong… only to discover it went horribly right instead. It turns out the original love potion was given by a prince to a princess (interestingly, the princess in question is depicted as an alicorn) but they were so busy being in love that it ended in the destruction of their kingdom. Apple Bloom has a rather dark imagination, we find, as she imagines the results of Big Mac not being able to farm and Cheerilee not being able to teach being an epidemic of poorly educated and starving ponies. However, Sweetie explains that the spell can be broken if they can prevent the couple from seeing each other for an hour. Sounds like a plan…

The fillies find Big Mac and Cheerilee at Sugarcube Corner, making even Mrs. Cake uncomfortable with their PDA as they share a milkshake… or would, if they could stop insisting the other take the first sip. When Mrs. Cake mentions wedding bells in the near future, Sweetie gets another idea… using preparations for a wedding as a pretext for keeping the sweethearts apart.

AB and Scoots take Big Mac to get a diamond, and Sweetie takes Cheerilee to Carousel Boutique to get a wedding dress. Sweetie traps Cheerilee in the fitting room, while Apple Bloom stalls Big Mac by refusing all the proffered diamonds. A moment’s carelessness means that Big Mac escapes her. AB sends Scoots to inform Sweetie while she tries to stop Big Mac’s pronking progress. However, not even tying a rope to a house is enough to stop him.

At the Boutique, Sweetie is distressed to hear the news, but gets another idea on spying some nearby shovels. They quickly dig a pit trap for the suitor, and Big Mac calls out for Cheerilee just before falling in. Hearing her snookums’ voice, she busts out, veil and all, and heads for her beau. The CMC try to stand in her way, but she simply bowls them over and leaps into the pit. Fortunately, the two were kept apart long enough to end the spell, leaving a very confused Cheerilee to ask what in Equestria is going on and why she is getting married in a pit.

The CMC come clean and admit that they made a big mistake trying to force the two into a relationship. Cheerilee thanks them for their concern but she and Big Mac agree the three need to be punished by doing all of Big Mac’s chores (presumably just for the rest of the day.) They also pretend to be going on a real date, just to mess with the fillies some more. And off they stride into the sunset together…

Oh, Sweetie Belle, why do you do things? Without her bright idea to set up Cheerilee with somepony, none of the hijinks would have ensued. Although to be fair, only her first (well, and second, but that was more of a group decision) idea really backfired, the rest of her suggested courses of action actually did assist in ameliorating the first blunder. I think it would have been a little better for AB and Scootaloo to have come up with some suggestions that helped solve the crisis too, since as it is the episode is rather heavily weighted towards Sweetie. She is my favourite Cutie Mark Crusader, though, so I’m not going to object too hard to it.

I thought the cringe aspect of the enforced relationship was pretty well handled… the way the two acted under the influence of the love poison was just balanced enough that it didn’t become too annoying, but still did enough to make it uncomfortable… which is as it should be, considering the CMC used literal date rape tactics on both Cheerilee and Big Mac. I’ll give Apple Bloom a point or two for being the only one to actually question whether they should be doing this. Pity she was so easily convinced to proceed.

In the end, the fillies can be given a bit of a pass for overriding Cheerilee and Big Mac’s free will, since they are fillies, and such lapses of judgment due to immaturity are easier to forgive than in somepony you could reasonably expect to know better. (Looking at you, Starlight Glimmer!) The important thing is that they did learn their lesson, and they didn’t get off scot-free. Props to Cheerilee for assigning them some sort of punishment and not just letting it go.

The moral is a little bit meta, since it seems to be a subtle rebuke to the habit some fans have of pairing up ponies without regard to whether it would actually make sense for them to be together. A little bit of romantic speculation is fine (I do it myself sometimes), but I disapprove of the lengths some fans will go to in shipping. See the “Die for our Ship” entry on TV Tropes for examples of the kind of things I mean. But back to the episode itself.

As I mentioned above, there were a lot of stallions not usually seen around Ponyville during the song, which seems a little bit odd if you think about it, but hey, songs in the show have always needed some leeway in terms of realism. At least it gave the animators an excuse to experiment… although perhaps some experiments were not meant for ponykind to know… 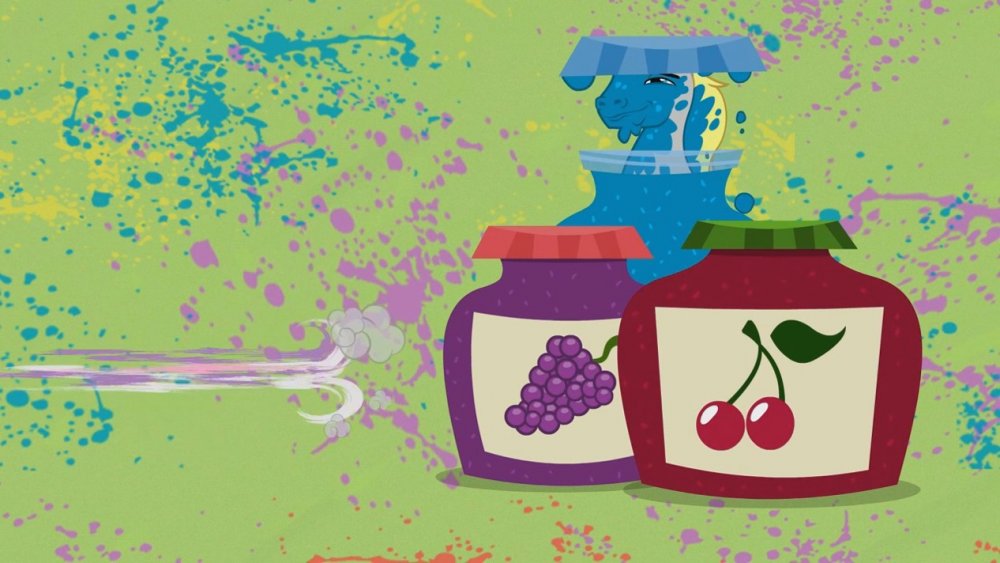 A very jarring image, that.

Speaking of jarring images, the scene in Sugarcube Corner is possibly the most suggestive in the show to date. Dat cherry… And then there’s the shots of all three CMC fillies straddled by Twilight… That one gave me some “Hiiiiii, gurllzzz!” flashbacks. Brrr.

Watch Cheerilee’s expression when Sweetie asks about her not having a VSS… Single people everywhere can relate.

The song is pretty darn funny… watch for that split second of morbidity, though!

When the love potion recipe calls for a Pegasus feather, Sweetie casually yanks one out of Scootaloo’s wings.

Pros: A good moral that works both in universe and out of universe. Some pretty funny things happen.
Cons: Perhaps a bit too Sweetie-centric. Unsettling implications if you think about it too much. Carousel Boutique, but no Rarity? For shame!

Final Rating
5 – Button’s Mom Rank: This episode has got it going on.
4 – Big Mac / Cheerilee Ship Rank: It seems like it should work, but there’s something not quite right…
3 – Button Mash Rank: Worth inserting a coin or two, but nothing super special.
2 – Hugh Jelly Rank: Once taste is enough, then put the lid on the jar.
1 – Love Poison Rank: For your own sake, don’t ignore the pony skull on the label…

And once more, we get to see a familiar holiday done the pony way, and it is sweet! Not a perfect episode, but still probably one of my favourites featuring the CMC. Next we have an episode that is somewhat less romance themed, A Friend in Deed. Join me next time as we greet a new character and welcome him to Ponyville. Until then, stay sunny side up!