FOREWORD: It was hard for me to get into the mood at first when right at the beginning of ep25 I was reminded of an incident a while ago where someone on the forums was inconsiderately posting spoilers about it where it didn't belong (Apparently some Hasbro spoilers I had missed because I only watch the show!) and had his behavior 100% protected and guarded by forum administration. By far not the first time I got loads of horseapples from that direction (and other areas of the fandom), that's why I stay away from there now and only write in the blog part. It got too infuriating again lately to observe the fertile ground for growing problems. ... The insanity of the world, you know.

... Now to some talking pastel ponies in magic land.

I will write this commentary roughly along the timeline and in the format of the thoughts that came up while watching.

So the mane 6 and Spike, all of them, go into an intense book-hitting,... but they didn't recruit Starlight Glimmer?!

The paradise of Equestria, where chewing on pencils is (for anatomical reasons) totally fine: 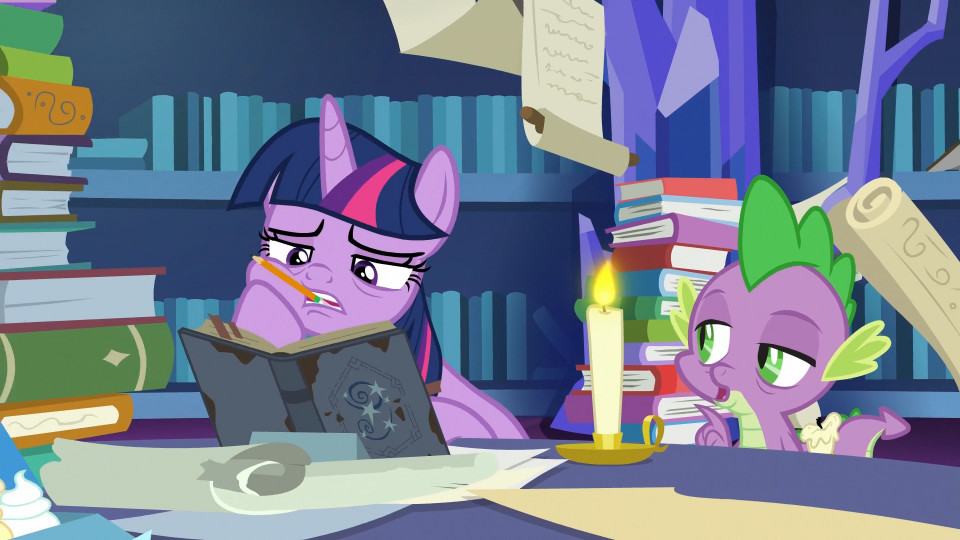 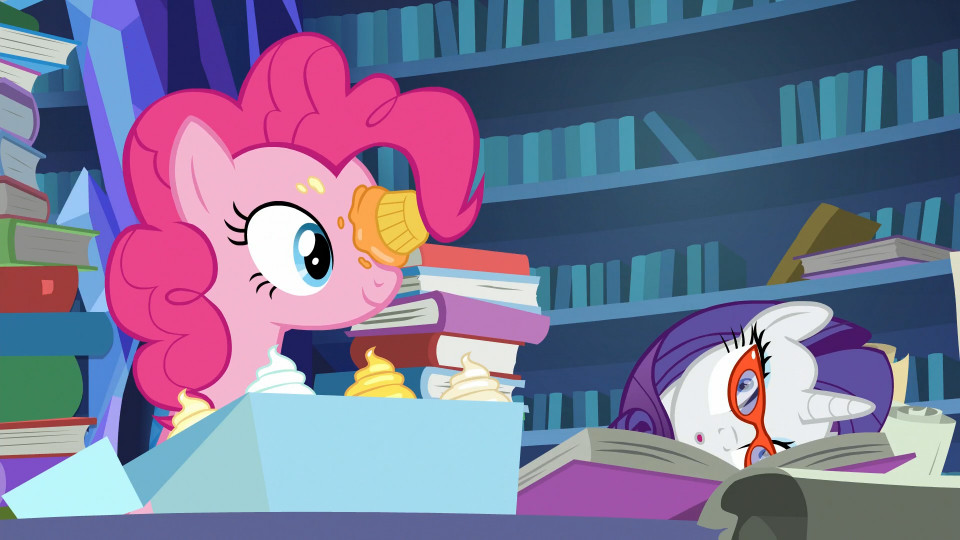 Who needs to decypher old ponish to figure out it's the Temple of Ponehenge if you got a picture of the location? 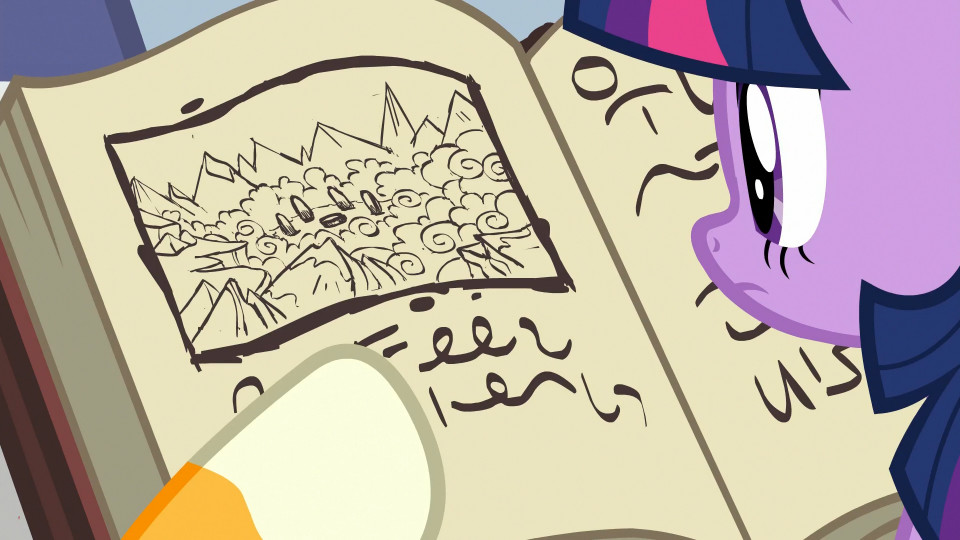 Once again AJ is skittling. (Tasting the rainbow.) She did that strikingly often during the beginning of the show. This is almost like a little nostalgia reference: 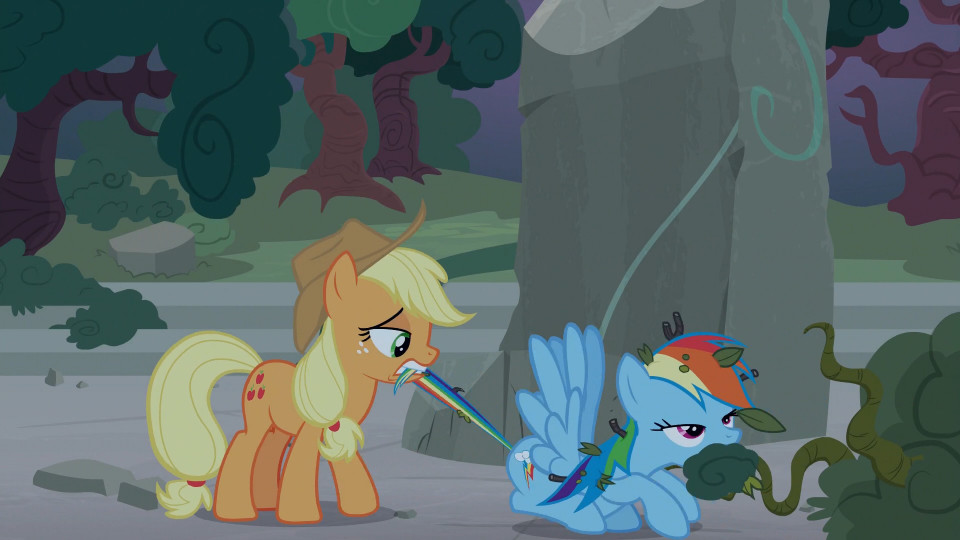 ) but to contain him, I thought: Well, imprisoning him in a realm where no time passes kinda is defeating. Just as you can explode twice, you can defeat someone twice.

So that other dimension to banish the PoS to is called "Limbo". The show keeps picking up mythical concepts of past times, heh.

When the mane 6 started collecting artifacts we learned that AJ suddenly has powers beyond what we would have imagined. That rock she kicked away was disturbingly big. ... Must have been pumice. I wish Maud had been there to comment. Was certainly very conveniently timed, but we can attribute that to the time constraints of the show finale.

In the same style we also learn that Rarity is a super-gardener who can, like if at all we would only have imagined Twilight Sparkle, magically transform an overgrown mess into a royal palace garden with lots of healthy plants that all somehow seemed to merely have been covered by ugly half-dead vegetation. And in the process she can get all kinds of stuff in her hair despite merely pointing her horn all around.

It is so easy to make Pinkie Pie happy. 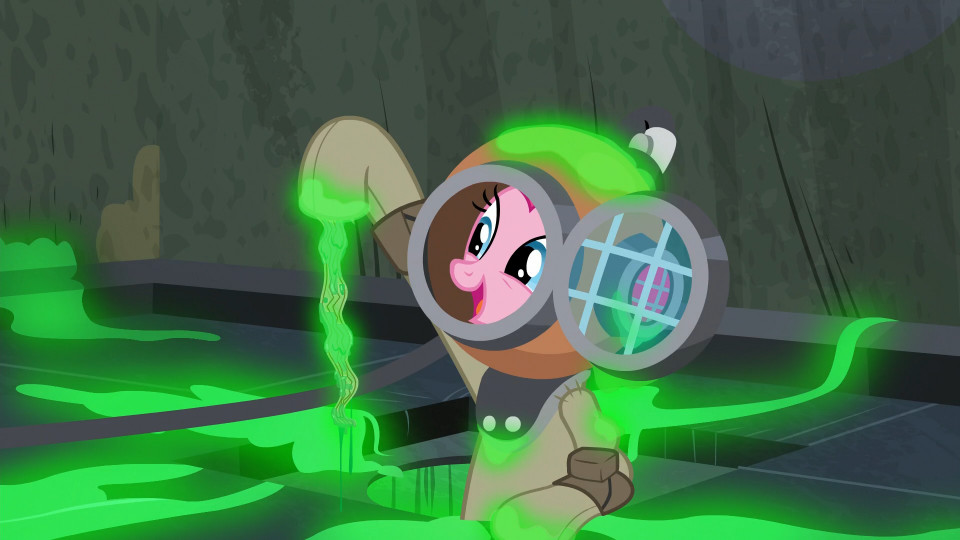 When Twilight had finally made a mess, I thought she should have listened to Starlight and have a plan B ready. Dunno why I assumed the plan was specifically designed to only bring back the wardens. - Oh well, opportunity for finally resolving the issue. Not unlike the Nightmare Moon thing.


Why, oh, why was Twilight so hasty with saving them when they were all trapped in a timeless state? OK, we later learn why, but it was already apparent here that she did it out of fan-admiration reasons, because obviously Equestria didn't really need the aid of Starswirl.
Personal note: Fans can indeed be quite selfish.

OK, maybe the long banishment caused him to confuse singular and plural. Maybe the portal was a plurality and should have been a singularity!

Another theory would be that this was related to another thing I noticed in that scene: Why is nopony there speaking old ponish? Did they slip in a translation spell in there without saying? Starswirl and his gang shouldn't be able to communicate with the ponies of the present.


At the castle was one of my favorite scenes because it listed the elemental association - I'm into that meaningful symbolic stuff:

You might know about the AJ+RD elemental confusion thesis, and here I would say if you swapped the two again, you could see how being honest requires one to be brave and how it takes inner strength to remain loyal. But apparently the associations from the old crew were not to match to the new elements so much as to the traits of the ponies. Fluttershy has a big heart, and that is THE source of healing. But laughter can also be healing, and hope can come from the heart, so there's another ambiguity there. One could really dive deep into philosophy here. The unicorns, Rarity and Twilight, had the most straightforward and fitting associations.

Seems like an obvious nod to the MLP movie. (Which I haven't watched yet, but it is neigh-impossible to escape this iconic aspect of it.) 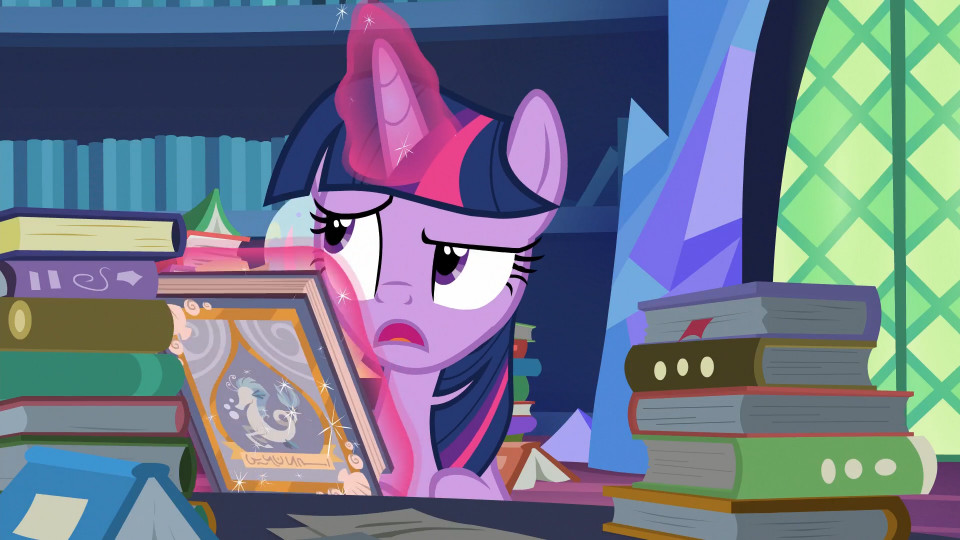 Then Starlight tried to console Twilight by saying "You didn't know it would happen." and my playful mind added "And I wish I had warned you. ... Oh wait."

Then Twilight goes and in still not having learned her lesson, tries to fix the problem by applying the same mindset yet again.

Then in a later scene her friends defend her against Starswirl's skepticism by saying she doesn't do anything half-way. Oh really? Didn't the whole crisis stem from Twilight doing a risky maneuver of pulling beings out of a prison dimension without planning for fixing it if it turns out to be a bad idea? I would call that literally half-way.

Twilight getting words of approval from Starswirl: The face of fangasmic life fulfillment. 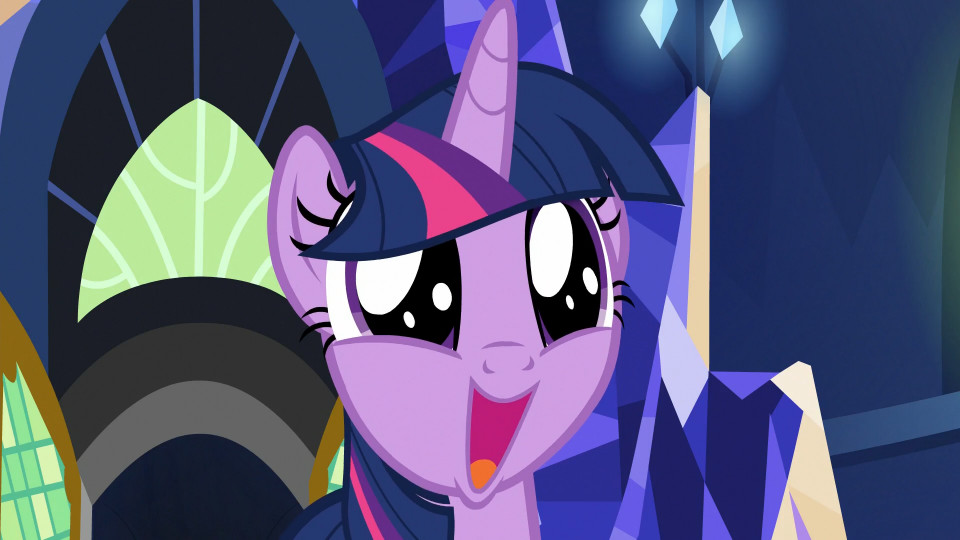 When Starlight finally suggested talking to the PoS, I was like: Yeah, that was like my very first though. The PoS seemed quite open and talkative after the summoning.
This is maybe part of the progress the realm has made over the idea of glorious fighting against evil. It represents a summary of past successes in Equestria, showing how the old ways are for the past and the new ways are more powerful, have more heart. (This is a lesson our world is struggling with heavily.)
Starswirl is basically too much of an old grump, inflexible as people can get with age, carrying a grudge against Stygian.
Starlight, you've been through this in the past: When someone keeps making mistakes and you see what's happening, see the folly unfold, you gotta be assertive!

Then we have a flackback scene where - as another franchise nod - we see sirens troubling the lands. And when they showed banishing them in another Limbo portal, I thought: Hmm, maybe he accidentally chose the wrong dimension? I could imagine where they ended up.

Land of the pink moon! Sold! 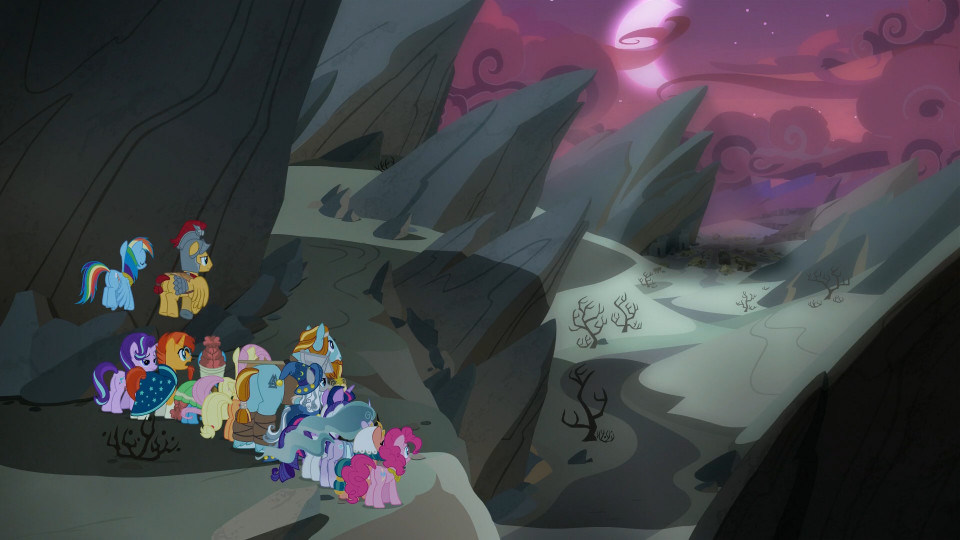 And a nice fadeover with pink again: 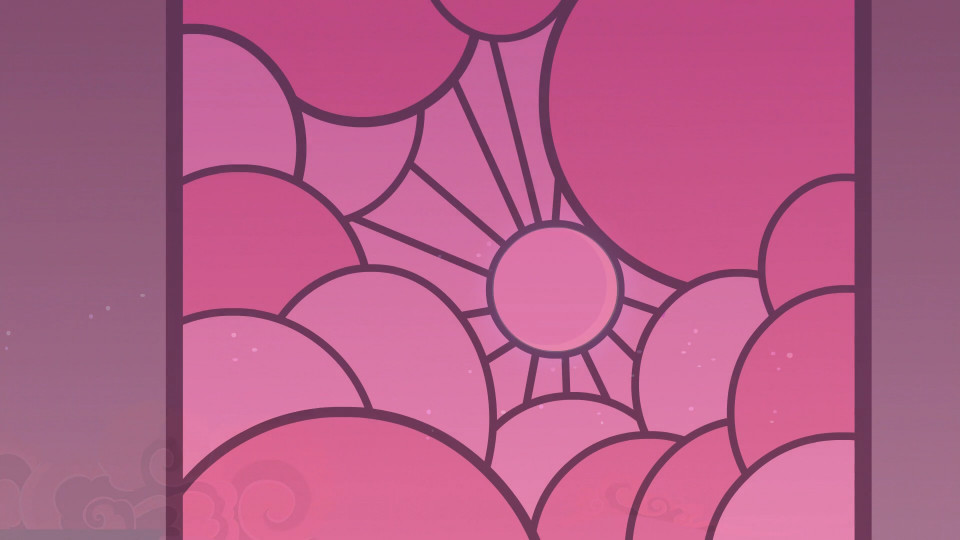 The theme around the resolution of this little story is again a bit relatable to me, since I do a lot of sociological observation, and as quite often, I see a bit of sad irony or hidden lesson here.
The 'heroes' habitually take the credit for their deeds, but forget to credit those who made valuable contribution behind the scenes, if you will. (I am reminded a bit of the latest Daring Do episode - different point but related issue.)
And here comes the kicker: It is happening again. At the very moment they resolve the issue with Stygian, what do we see? Twilight Sparkle again being lauded as the Princes of Friendship, how she always manages to bring friendship into the world, as if SHE wasn't the clumsy student who needs her friend's help time and again, and here I was amazed at how well Starlight took it, considering she was the actual hero of the story. At that point I totally expected Twilight to mention how it was Starlight who practiced the magic of friendship there. Instead she had to bring it up by herself and got a brief seemingly humbled remark from Starswirl that contained the word "I" but not "you". I found that really vexing especially in the context of what had just happened. And as if that wasn't enough, at Canterlot Castle Starswirl again showered Twilight with praise about the magic of friendship. I mean, OK, I get it that Twilight reformed Starlight, but that, too, was something she only managed thanks to the support of her friends.
Only in the very last seconds, in a kind of "in private" moment, Twilight made a gesture of giving credit. As if her reputation or anything forbade her from giving credit publicly.

Starswirl said: "In turning away from others, you hurt yourself as well." And I feel compelled to connect that to my real life experience, because things are easily said as if they were universal rules. Sometimes turning away is the healthier option, or the only one. Some challenges are far too great. Although that is where concentrated virtue like with the mane 6 can pull it off. Stygian might not have seen a chance back then, being one pony against the group. We don't know the kind of energy that has accumulated among them. If a whole group turns away from one person, if they all share the same issue, there are some nasty energies going around.
This is why what is very powerful is to accept things the way they are in order to change them. They couldn't have defeated the PoS with condemnation, without accepting that he existed because of what came before.

You cannot change the past, only learn from it.