Hello everyone. Woohoo here with another entry of Musical Manslaughter, because you can't spell 'slaughter' without 'laughter' and these songs are jokes.

Well, here I am once again not torn into pieces. It's been a while since I've done one of these. No, the last one doesn't really count because silence isn't really a song. Plus, it was April Fools Day. Anyways, on to business. The reason I haven't made an MMS in a while is... well, there isn't a lot of songs that make me angry. I could rant on more Taylor Swift songs but I don't wanna be labeled as "that guy who always rants on Taylor Swift" so I'm trying my best not rant on the same artist(s) over and over again. I just don't wanna be a one-trick pony.

Anyways, I finally found a song that makes me angry, although not really at first. I didn't really pay attention to it until late last year. The more I heard it, the more it angered me. If you haven't already guessed from this entry's title, which is probably none of you, this song is by an artist named Ed...

That's the one. The messy red haired singer known as Ed Sheeran.

Yep, I'm ripping apart an Ed Sheeran song. Oh boy, this will be a doozy. I can already hear those fangirls' keyboards tapping. Which Ed Sheeran song am I tearing into? None other than his #1 hit from last year, "Shape of You."

Alright, I've shucked and jived long enough. So why do I hate this song? Let's break it down.

What... the... fuck... Seriously?! There's no way... unless... is this supposed to be the melody? Or is it the beat? Could someone in the comments tell me if this is a melody or a beat? Or even what instrument is being used? For now, I'm just going to call it the "bing-bong." Whatever the "bing-bong" is, it's fucking horrible! It's so bland, cheap, lazy, and unprofessional! Hell, it sounds more unprofessional than Lars Ulrich's snare on St. Anger. At least there's some heart behind that snare. Here, this "bing-bong" sounds so vapid, soulless, and it just sounds an unfinished demo.

Alright, enough on the "bing-bong." Hopefully the music will change in the chorus. But then the lyrics come in...

The club isn't the best place to find a lover, so the bar is where I go...

I... actually agree with you, Ed. Clubs sucks! They're loud, crowded, obnoxious, and in no way the best place to find a lover. Bars are much more manageable... Wait, why am I talking about clubs and bars?! I need to stay focused.

Me and my friends at the table doing shots
Drinking fast and then we talk slow
Come over and start up a conversation with just me
And trust me I'll give it a chance now
Take my hand, stop, put Van the Man on the jukebox
And then we start to dance, and now I'm singing like...

So far, the lyrics don't seem too bad. They're generic, yeah, but not infuriating like the songs I tore up earlier. It's just a song about a lonely guy going to a bar hoping to find a lover and eventually finding one. Also, who is this Van the man? I'm just gonna assume it's Van Morrison since you list him as one of your influences. However, after this verse, things go downhill fast...

What the actual hell, Ed?! Are you singing about... sex!? How could you?! Did you ever think of the children?! OK, I'm overacting but... how do put this. The idea of Ed Sheeran singing about sex feels off to me. I can't really explain why. Why, Ed? Why did you make a sex song? Is it because sex sells? If so, I ain't buying. I'm saving my money to buy peace. Also, and this is just me, this song almost  feels like him selling out. Well, let's just hope he doesn't start twerking.

Also, if this is a sex song, then it's one of the most unsexy sex songs ever. Hell, "Dead Skin Mask" by Slayer is eons sexier than this!

Ugh, I'm already going crazy and I'm not even at the chorus yet. Speaking of which...

Where do I even start with this?! Let me break it down...

Oh, and remember when I hoped the "bing-bong" would stop at the chorus? Nope, it keeps on playing throughout the chorus. Are you kidding me, Ed?! Are you trying to bore and annoy your listeners?! In pretty much every song I've listened to throughout my life, the music changes with the chorus and/or verses, even if the change is minor. This has to be one of the laziest songs ever made, both musically and lyrically. It's even lazier than "Shake It Off," and that's saying something.

Then again, maybe the second verse might change my mind...

One week in we let the story begin
We're going out on our first date
You and me are thrifty, so go all you can eat
Fill up your bag and I fill up a plate
We talk for hours and hours about the sweet and the sour
And how your family is doing okay
Leave and get in a taxi, then kiss in the backseat
Tell the driver make the radio play, and I'm singing like...

Nope, it's more the same shit. More unsexy lyrics followed by that long-ass chorus with that relentless "bing-bong." Do I need to complain any further about the "bing-bong"?! You can make a drinking game out of how many times I say "bing-bong." I haven't been this enraged at a song since "Shake It Off." It just begs the question: What the hell were they thinking?! *sigh* After that, we get to the bridge... I think...

This is the only part of the song where the "bing-bong" isn't heard. I would say it's refreshing, but not really. It's just one line repeated eight times, and you all know how much I hate that. Also, I never understood why 'baby' is a pet name. It sounds degrading if you ask me.

Alright, I think now's the time to wrap this up. Pip-pip cheerio!

And that was "Shape of You" by Ed Sheeran. Do I hate this song? Well, if you made it this far, you should already know. Now let me break it down for ya.

My biggest issue with this song is the music, more specifically, the "bing-bong." Whether it's a melody or a beat, it's one of the worst pieces of music I have ever heard. Aside from the bridge, it's played throughout the entire song. Unacceptable. The lyrics don't help much either. Ed Sheeran's attempt at a sex song comes off as either generically bland or extremely cringy and it also made me feel dirty inside. Overplayed? Hell yeah it was is! I heard this song multiple times a day in late 2017 and I still hear to this day. Just the first note makes my blood pressure skyrocket to Yugopotamia. Now some of you are probably wondering if I hate Ed Sheeran. Surprisingly, not really. He's not great, but he's not terrible either. I don't find him nearly as irritating as most other pop stars, but boy, did he make quite a stinker of a song.

Now for the final score. 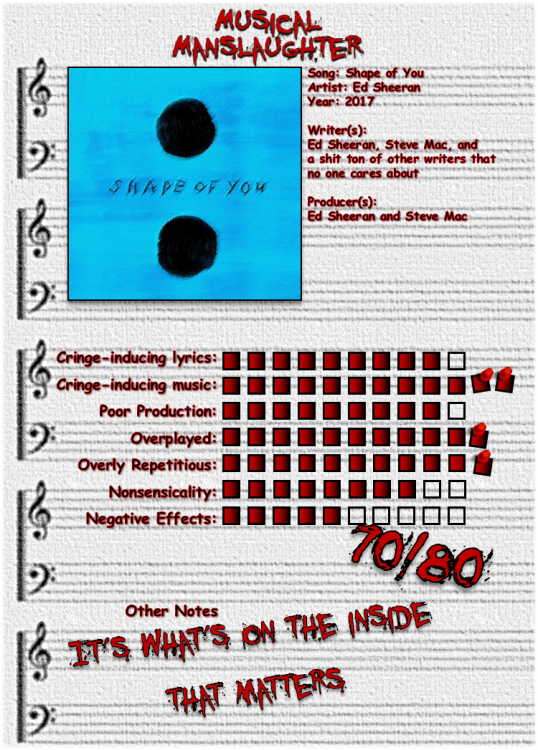 And that concludes this entry of Musical Manslaughter. How do you feel about this song? If you like it, that's fine. This is Woohoo, signing off.