Note: Credit to @gingerninja666, @Ganondox, @Theanimationfanatic, and Justin Galloway on YT for this review, which has been revised to expand my thoughts better and for better editing as a whole.

Out of every legend from Season 7B, Rockhoof's was the worst. Combined with being a boring character, the story itself was very bland, and Applejack told the entire thing rather than letting the tale show. It's competent, but completely uninteresting. How ironic that in his first self-contained episode, ARaaHP is spectacular with some of the best characterization of a Pillar since they were first introduced.

Hard Place is a "fish out of water" story, an idiom that puts the character in a setting or situation they're very foreign or uncomfortable with. DHX holds none of the comedy back, which had a lot of variety, but mostly came from the characters' reactions, starting off with Professor Fossil. Rockhoof doesn't understand preservation at all, because he lived in the era she continues to discover, emphasized by his destruction of an old sweat lodge (rightfully upsetting her) and triggering the conflict.

Professor Fossil: Maybe in the past. *blows on stone ball* Now it belongs in a museum. Safe. Preserved. Untouched.

The scene in the auditorium to begin Act 1, while adding on to Rockhoof's inability to adapt to modern times, established connections, providing pivotal context as the episode progressed. Rockhoof's a Pillar, adding to the mystique and adoration from folks across generations. Most of this generation in the School of Friendship's very young, with five of the six unfamiliar with pony folklore. Smolder's sarcasm in response to Rockhoof's first accident is just one opinion (which changed as he told his story of his fight with an Ursa Major), but Yona adored him immediately, because his strength and bravery remind her of yakdom back home.

As for the rest of Act 1, there was criticism of what Ocellus said about Discord's stone transformation (Celly and Luna casting a spell) as not being true to continuity. That's not true. From Princess Twilight Sparkle, Part 2: 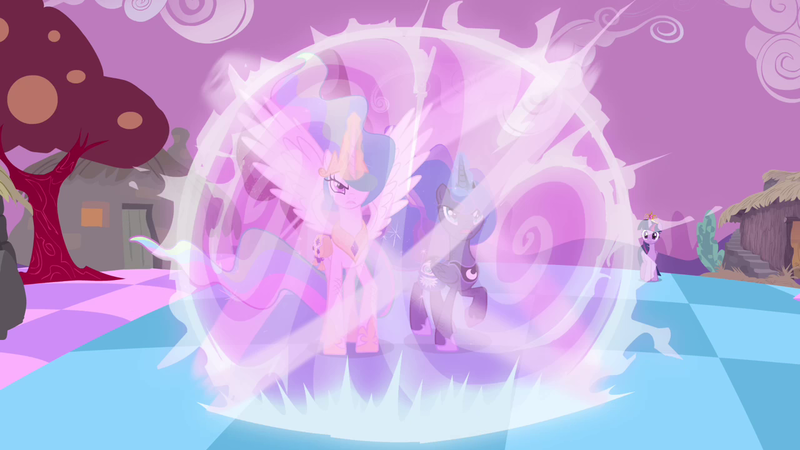 Sisters power up the Elements. 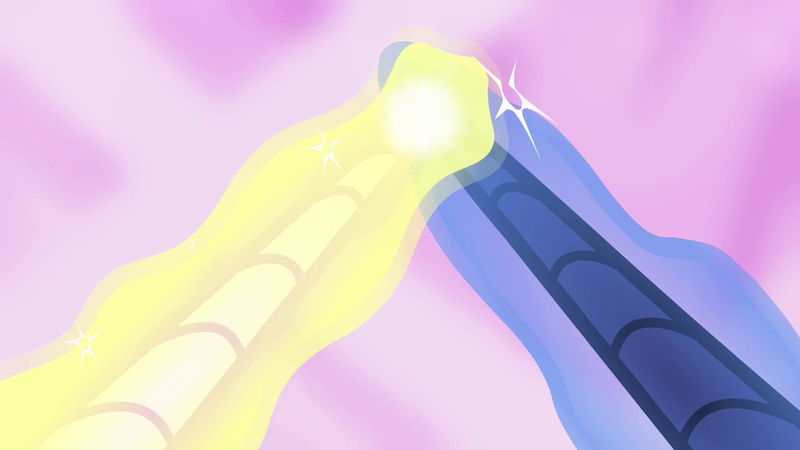 Them casting a spell. The Elements couldn't turn him to stone alone.

And I agree with YouTuber Justin Galloway regarding this point (his comment from this video link):

Okay, seriously, if Yona, Gallus and Silverstream growling and yipping like puppies isn't the cutest thing ever, then I don't know what is﻿

Personally, I can't blame the students for feeling excited (and Gallus lying about the class's direction). Learning can be fun, but sometimes boring, and Gallus is the perfect rebel to steer the class and Rockhoof in another direction. The story, despite in small doses and done to further emphasize his trouble to adapt, was really entertaining.

To reiterate, the comedy in this episode as a whole is absolutely fantastic. This one in particular is probably the best one. (You know what I'm talkin' about.

Rockhoof: *crashes through stone wall* Let's get you outside, wee ones! *shovel under Yona*

Several other funny moments include:

Despite doing so inside the school (even though Twilight told him to wait previously and didn't react at all to the fire), Spike and Smolder's bond continues to evolve through a fire-breathing competition. Small, but compared to their conversation in Molt Down, they're more comfortable around each other, and she's not so bristly towards him.

That said, no matter the jokes or how much Rockhoof screws up, the episode never treats him as dumb at any point, which @Theanimationfanatic points out. Everywhere he works, he's always willing to impress, whether it's delivering the post to the right house, massaging, helping Zecora, or teaching. Wherever he went long ago, his warrior-first instincts aided him, and he applies them here. Today, harmony replaced war. He doesn't need to fight much anymore, especially now with Stygian redeemed. As a result, he screws up, sometimes badly, yet the episode does a great job not making him look worse each time he faults. To expand my reply, his struggle feels real, and he always works to at least try to succeed; at times, he does the right thing, but overlooks one crucial detail, whether it's teaching instead of preparing for battle, trying to relive life on his soil rather than retaining its history, and so forth. As a result, we sympathize for him and root for him to succeed. It's a major strength that the episode worked very hard in getting right.

What's more interesting is how most of the Pillars still contact each other and know their whereabouts, but not Rockhoof. Despite their close connection as champions and friends, it also shows us an audience how distanced Rockhoof became since the Pillars split. He goes back home and virtually spends his days there, as if his life is complete. He can keep his shovel, but not need to use it. He remains a warrior, but as the episode progresses, he realizes he's less of a warrior, but now a veteran who can't settle after being gone so long.

On the other hand, DHX/Top Draw puts forth a lot of effort to make the other Pillars's adaptations as seamless as possible. My favorite is Mistmane's just because of her work in The Crystal Empire. 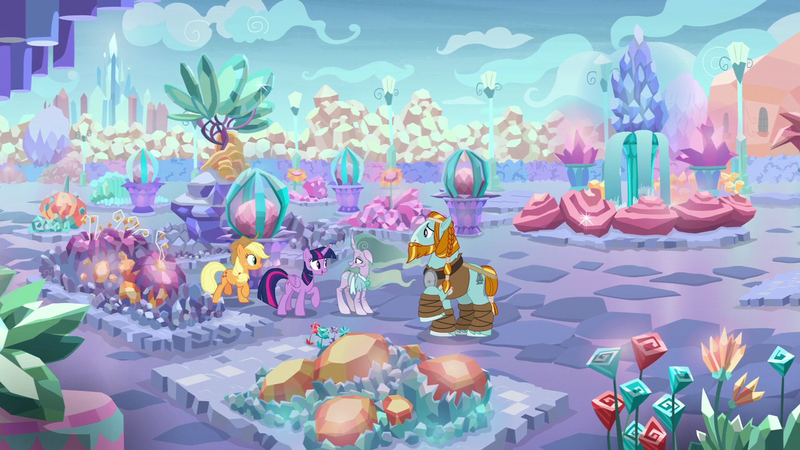 There are a lot of amazing set designs throughout the series. But Twilight's right. The imagery here's some of the most beautiful ever put forth for the show. The composition, colors, crystal designs, light, shadow, and perspective are so organic to the country.

As the episode progressed, Rockhoof's struggles slowly took a toll. Sulking away from the School started it, and his doubts reappeared in the CE scene, especially after he tells her that shovel ponies aren't in current demand. It progresses further by accident after Meadowbrook was able to open her clinic back home and then after Twilight finds Stygian's new novel. Both of these sting him for two reasons:

One of my favourite little details in this episode was the whole "stars shift over time" thing. Mainly because in stories that are about time travelers struggling to fit in with the modern day, normally they are at odds with society itself. People and culture and technology have left them behind. That happens here, but it's more than that. The very nature of the world has changed, even if it's in a small way. One of his most helpful skills has been rendered muted or even useless not through progress or anything like that. But because of time. ﻿

And it's after this when Rockhoof requests to be turned to stone. Mpambara doesn't hide one bit how it's an allegory of suicide, and his (the writer's) logic narrows this down in several key areas:

The followup scene in the castle hallway is one of the best of the series. Yona developed a student-to-teacher crush on him, but when his life was in danger, she came right to him, and her idolization for him evolves, evident by the class report she recited. She's in school in Equestria, where no one looks like her or shares her interests; her constant running almost got her into big trouble immediately, and Neighsay spouting racism towards non-ponies doesn't help. Bonding with others eases her fears and makes her feel safe. His ability to be strong, brave, and persevere inspired countless individuals, including her, who's innocent and childlike. Their chemistry and her admiration are incredibly genuine, and the fact she stood up for him and convinced everyone in the school to gather around outside and listen to his stories at maybe the lowest moment of his life makes him realize at just that moment he means so much to them.

It fixes a big problem from two previous episodes: Magic Sheep and No Second Prances.

Here, A Rockhoof and a Hard Place tackled a really dark subject, but took a long time developing the allegory, provided key clues foreshadowing what was coming, and treated it with the delicateness and seriousness it so richly deserves. The moral it teaches — "No matter how hurt, lonely, or hopeless you feel, you matter." — is also magnificently executed.

But it isn't just Yona and Rockhoof. AJ and Twilight were really good in their roles, too. Twi may lead the school, but she trusted AJ into conversing with each other and letting AJ help guide her and him wherever he went. Working with him and helping him was a team effort throughout.

More importantly, Mpambara keeps Spike in character in Act 3 without looking insensitive. How? With this shot: 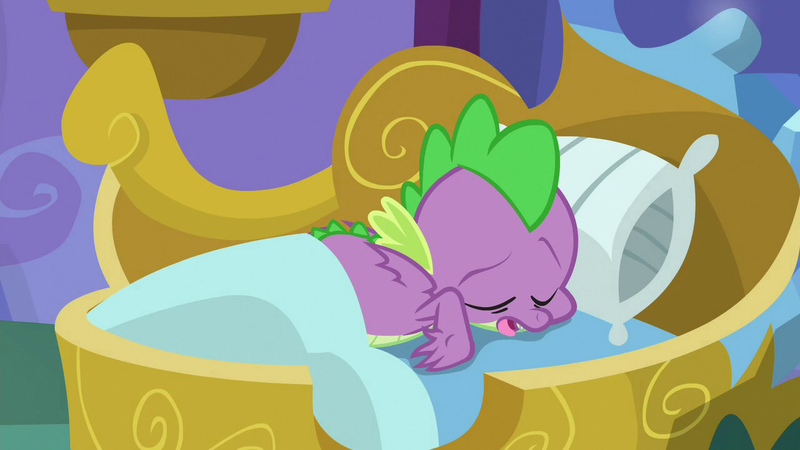 Spike has a history of being snarky, but thanks to the suicide allegory, his sarcasm, sardonicism, and sometimes blasé behavior won't fit at all to the tone and messaging DHX is aiming. If not careful, viewers may end up hating his portrayal. By opening the act with him asleep and then woken up with a start, the episode instantly sets part of the tone, and his sleepy behavior parades into the classroom, allowing DHX to use his snark for comedy without unfortunate implications.

This episode was an amazing surprise. Because Season 8 was so good up to this point, I had high expectations for this one. After watching it the first time, I knew it was great. But watching it again and again helped me pay closer attention to the effort put into creating this wonderful story. Ever since I first watched the S8 leaks last year, I had Break Down as its best. A Rockhoof and a Hard Place replaced it, and it's one of the ten best of the whole show. Bravo!

P.S.: Those who read my statuses may have read and followed my episode order, but for those who don't, this is my current top-10 of the series (including Rockhoof):

An episode of such a quality deserves such a spot. More can't be said about how amazing Hard Place is.