Note: Credit to @Zestanor and @Truffles for this review.

Since School Daze, the Young Six have been some of the best characters. Eccentric and childlike, yet diverse in personality, gender, and race, their friendship is linked by caring for each other. After Cozy thrust doubts subconsciously, the Tree's spirit reminds them of their powerful friendship. Uprooted is their second (unplanned) test: The Tree's detroyed to their massive shock, and they concluded to memorialize it.

So how well was is written? Not all that bad.

In only a couple of minutes, the opener effectively establishes what their personalities, goals, and weaknesses are (often intertwining them through jokes, whether they’re brand new or called back from previous episodes, e.g., Smolder’s closeted femininity). Then when Twilight tells them the news of the Tree’s destruction, it’s easy to see why they’re devastated. The Tree not only solidified the harmony between them, but Equestria’s as a whole. Additionally, Dubuc addresses to continuity from What Lies Beneath and School Raze while keeping it self-contained so newcomers mustn’t watch earlier episodes to understand.

At the same time, it gets clumsy at points.

However, Uprooted has several bright spots.

It feels a lot like an allegory about death, but rather than replace it for hibernation, there's a true sense of finality with Sombra destroying the Tree and Elements and the unknown of how to properly tribute it. Their decision to build a small treehouse solves that problem wonderfully. Yes, it's not the best built, using broken trunks, branches, and spare parts, but it centralizes who the Young 6 are: a diverse cast who represents the best of each kingdom and each other. The following lines punctuate it:

Sandbar: Well? What do you think?
Ocellus: It's, uh…kinda messy.
Smolder: Yeah…like a bunch of different parts all smushed together.
Silverstream: Oh, it's just like us!
Yona: *rolls blueprint* Yona think it perfect!
Gallus: Let's give it a try.

But then, a miracle. By representing the Magic of Friendship at its purest, they rebuilt harmony within each other and applied their close friendship to rebuild it in its memory. Consquently, the Tree of Harmony turned to this: 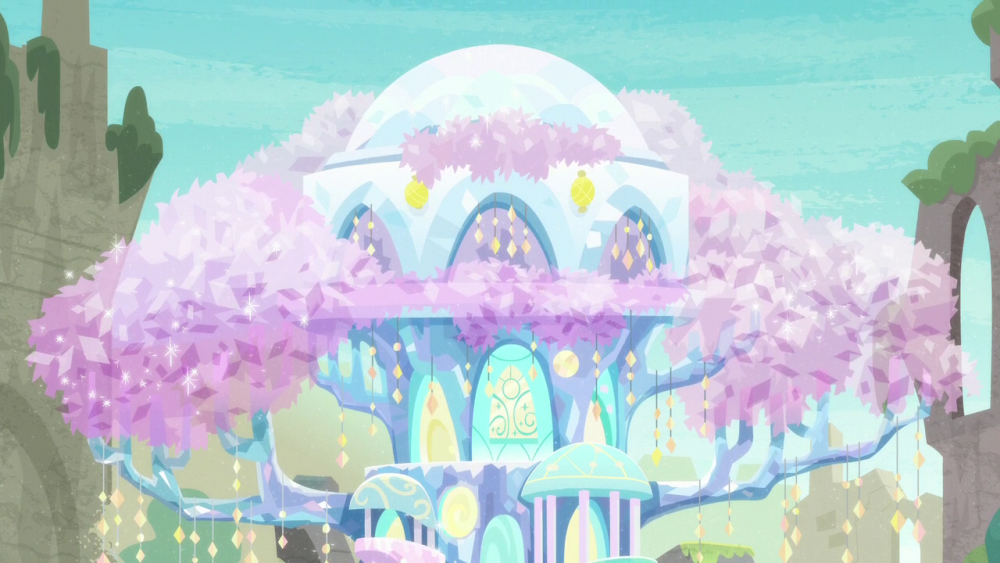 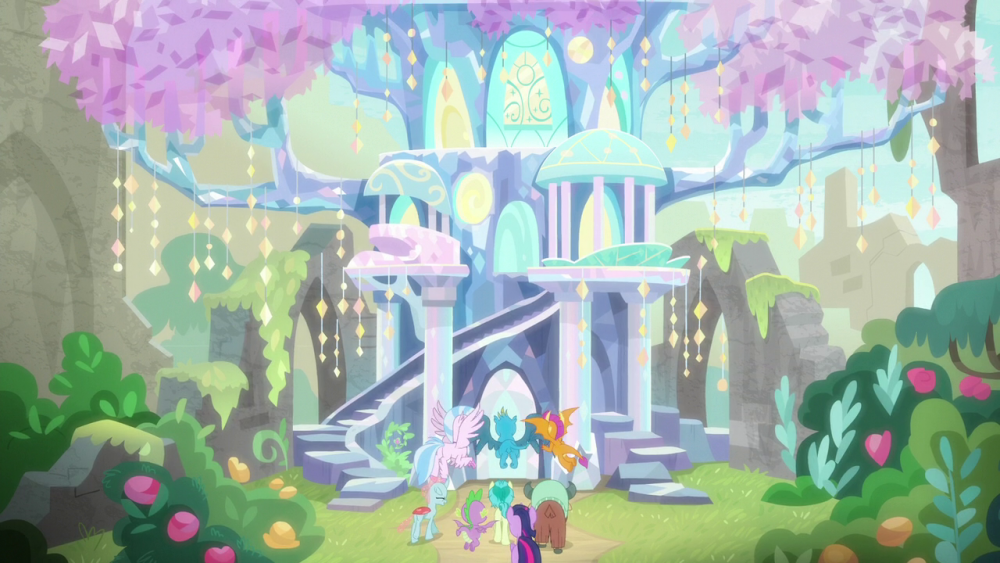 The Treehouse of Harmony's beautiful! Its crystalline pastel colors of blue, pink, and yellow invite the eyes, and it's breathtakingly composed. Compared to the Castle of Friendship, you'd want to actually go there. The Tree's spirit says they'll be safe within the house's walls, and optically, you believe her. Also, the ruins of Castle of the Two Sisters is collapsing (credit to @Truffles for pointing this out), so the Treehouse now takes its rightful place, replacing it for something more useful.

As far as the elephant of the room's concerned, sure, the inspirations to Castle Sweet Castle are obvious, thanks to its similar structure and ideas, but the plots aren't the same. In fact, there's one gigantic difference between them:

Coming into Uprooted, I predicted the Y6 will become the new Bearers of Harmony, for the Tree tested them, saved them, each on sharing similar qualities with the ReMane Six (while still being themselves), and the Tree encasing them with the Elements' glows encased them in Raze. But with the auras being trading interchangeably (compare this to this), the Elements and Tree evolve into the Treehouse, and the spirit wants the Magic of Friendship wanting a safe space for friendship, it's becoming more and more possible that the Tree's spirit and magic used when the Pillars planted the seed want to pass down the MoF, perhaps to everyone, not just six masters. The fact that we also see no cutie marks may foreshadow more of what's to come.