HEY HEY HEY! It's been a while, hasn't it? But it looks like some new stuff is being added to the game, as well as some exciting new changes! And there's a few things here I can't WAIT to tell you about!

With the completion of the San Palomino Desert area, I've managed to incorporate a proper world map into the game, using an actual map of Equestria I picked up offline! Different colored markers on the map will lead you to different places:

- Yellow Markers: Passages to other maps.

( And yes, I am aware that the map screen in the screenshot below doesn't have the colored markers. I literally took that RIGHT BEFORE I colored them all. They'll be color coded in the final game, don't worry! )

As much as I would have loved to include an actual overworld map of Equestria, much like with Maradice Isle itself, this was just impossible to do. I do hope everyone understands.

In addition to this: Several new areas have been added, chief among them being the Ghastly Gorge Pass you must pass through to get to Ponyville. Due to the original overworld map being removed, Frostbite was moved to this location so he can once again teach you all about Power Orbs. In addition, there's a special event that happens here the first time you pass through. What is it, you ask? You'll have to find that out for yourself.

More spells have been added for the Mystery, Darkness, and Equality Ponies. I estimate that every class now has %50 of the spells they will have by the end of the game.

Due to a few complaints about balancing I have received, several changes have been made to the spells across all 7 classes, as well as for monsters.

- Spells can no longer score critical hits. Criticals now only apply to physical based attacks, such as the Ember Pony's "Sword Dance" and the Equality Pony's "Cross-Slash".

- The MP cost for many spells was increased.

- The SP gain of all the spells was reduced heavily.

- The spell "Spark" has been nerfed to only strike 2 enemies instead of 4. However, it's damage multiplier was buffed back to the same number as the rest of the Thunder spells in order to compensate.

All of these changes are helping to better balance the gameplay, prevent classes with group attacks from going on mass killing sprees, prevent Thunder Ponies from easily cheesing bosses with 4 critical hits from Spark, and to prevent cheap deaths from a monster scoring a lucky critical with Sandstorm, Meteor Blast, or worse yet, Spark. ( Something that cost me my fair share of games on Lava Mountain ).

Alas, our wonderful composer who handled the games music since Day 1 has stepped down and left the project in order to pursue a career in the military. While we're sad to see her go, we're forever grateful for all the help he/she gave us, and we wish them only the best.

I can already tell that finding a composer equal to her to take her place will be next to impossible with no budget, so that's why I'm not even going to try. Instead, the game will be using a remastered version of the Golden Sun 1 and 2: The Lost Age coundtrack, complete with the GameBoy Advance tones removed and with much better clarity. I've already replaced all the original tracks with these updated songs, and along with that, the menu sound effects have been replaced as well.

For those of you who loved our composers beautiful musical tracks, fear not. The song she composed for the cinematic that plays right before you arrive in Equestria will be staying in the game, and all of her songs will be boxed in with the final game for your listening pleasure. Keep an eye out for that whenever that comes.

More Power Orbs are being added into the game, including one that'll allow for quick MP recovery when used in a tense battle! Be on the lookout for them as your exploring the world!

As of right now, I cannot continue development until I get some tilesets I'm waiting for. But while I wait on those, I am getting some other things done that I needed to get done for a very long time, including the re-balancing I mentioned above. I'm also getting the sprites for Princess Celestia and Princess Luna ready, so they can make their big debut when the time comes.

Next time I pop in to give you guys a development update, Nature Hills joins the party, and we just might get to visit Princess Celestia! Until then, everyone! Take care!

As of now, the project has reached a point where the story can no longer be spoiled, so as not to ruin the experience for new players. As such, from this day onward, Bulldozer Studios will be enforcing a "ZERO TOLERANCE FOR SPOILERS" policy in regards to Maradice Isle's story. Any spoilers towards the games story must be marked with an appropriate tag so others know to avoid them. Failure to do so may result in disciplinary action being carried out. Nobody likes it when a games plot is ruined for them before they even get to play the darn thing! 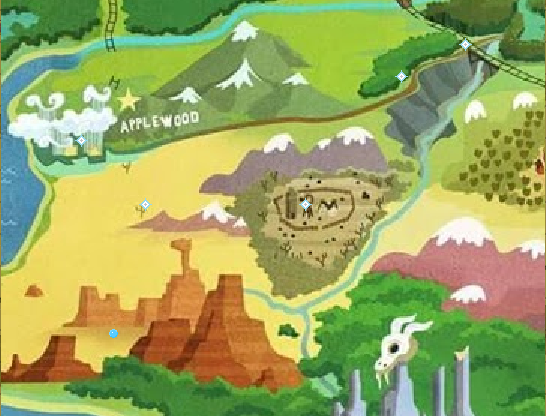