Episodes, movies, specials, spin-offs, shorts, books, toys, apparel, cosplay, music, fan art, fanfics, reviews, posts, blogs, fan videos, memes, animations, 3D models, video game mods, and yes--for me, even clop.  When I look back at the past five years since I discovered the show and add up every minute that I've devoted to Pony, it's pretty staggering.  And I wouldn't trade it for anything.  Well... except for a girlfriend.  I'm only human.

I've loved this MLP journey so much.  I can hardly believe how much was crammed into five years.  Pony has been, and will surely continue to be, a huge part of my life.  I've been obsessively into other franchises in my life, but not in the same way as Pony.  MLP was something different entirely, and it was magical.

Being a male with a strong feminine side, and no good way to express it, I've always felt stifled and frustrated.  I've always had pretty broad tastes, and enjoy a wide variety of typical "guy" stuff, too, but for many years I searched for a show that would scratch a certain itch for me.  I wanted to find something cute, colorful, and feminine that would, for lack of a less nauseatingly saccharine phrase, "warm my heart" and give me some of that feeling I couldn't find anywhere else.  I tried a few "girly" cartoons over the years, but all ended up being impressively devoid of any character depth, development, or substance.  I would try to watch, but just go "pffft", and turn it off pretty quickly.  Then I found Friendship is Magic.  It was love at first watch.  Adorable, colorful, feminine, sweet, but didn't make me feel like it was lowering my IQ by watching it.

Pony is a "girl" cartoon like no other I've ever seen.  The depth of these characters and their world is every bit as robust as the biggest fantasies ever created, like Lord of the Rings or Game of Thrones.  At the same time, it manages to be cute without being cringey, sweet without being saccharine, and endearing without being dopey.  It's mature, not dumbed down, and it's a proper story just as fit for all ages as any classic Disney movie.

I got properly sucked into the fandom in no time at all.  The show and the community had an incredible impact on me.  It brought me out of my shell and gave me a voice, so to speak.  Before Pony, I followed a strict internet rule of "read-only".  I never posted anything, anywhere.  I stayed completely silent.  I figured it was easiest and safest to never speak a word--that way you can never get in trouble.  For reasons I'm not quite sure I understand, Pony somehow inspired me to start talking, to speak my mind not only about the show, but about everything.  I started writing my robust blog and talking with other fans.  I've offered a lot of help in Life Advice.  I've contributed some of my own fan art to the community, most notably with my realistic 3D pony models.  (Mare of Steel is kinda my pride and joy.

)  I probably never would have bothered to learn 3D modeling had it not been for Pony, and I discovered that 3D modeling is one of my greatest joys in life.  I love everything about it, and I have big future plans in that department.

I've also decorated my room with Pony merch.  In particular, I'm most fond of my extra large canvas art print of Ponyville square at dusk with all of the characters out and about.  I got that from a talented artist on Redbubble.  (Shout-out to Stinkehund!)  I even made what I dare say is one of the best Equestria Girls Rainbow Dash cosplays ever created, which I wear around regularly.  Pony has made my life so much richer, and filled it with so many wonderful things.  It's also made me more confident and optimistic.  I would have missed out on so much had I never discovered MLP.

Pony has absorbed an embarrassing amount of my time and attention these past years, and I've loved [almost] every second of it.  Now, I'll be the first to admit that I've been the type of fan to critically review it, and get bent out of shape when they make decisions I don't like.  In fact, I've been pretty vocal and angry about some episodes.  And yes, I'll even admit to being one of those asinine, annoying fans who gets all whipped up and offended when they ruin one of my headcanons or mess up one of my ships.  Yup, I'm one of those fans all right.  (I'm sorry!

)  I've taken the show way too seriously at times.  Guilty.  That's the mind of a clinically depressed autistic for you!

But I've always tried my best to keep it in perspective.  Now, at the end, I can confidently say that the bad episodes, the frustrations, the disappointments, the continuity errors, the plot holes, and the missed and wasted opportunities are not what I will carry with me.

What I will take away are the joys, the laughs, the thrills, the chills, the feels, and the tears.  Despite any decisions I didn't like, these charming, endearing, wonderful, beautiful characters and their world have given me a ridiculous amount of joy, and I will love and treasure them always.  I am extremely grateful to all of the hardworking people who made the show possible.

And yet, like all good things for me, Pony is a double-edged sword.  It seems my cruel fate to find the most wonderful things in my life simultaneously depressing.  I am a deeply troubled, depressed, lonely person.  If you've read much of my blog at all, then you probably already know that.  Whenever I watch FIM or EG, I am constantly reminded of the things I long for but will likely never have.  I watch the ponies and the Equestria girls with a constant and persistent pain because I wish so much that I could live in a world like theirs, have friends like them, and have that sort of affection in my life.  I long for romance more than anything in the world, and MLP G4 reminds me of the kind of person I wish I could have in my life, but never will.  Pony would often cheer me up, but then leave me feeling even more alone afterwards as I would think deeply about the voids in my life.  At times, I even found it extremely difficult to watch the show because of the pain it would cause me, as I wished so desperately for things that I will never have.  Friendship is Magic has been so beautiful, and yet for me, in the cruelest of ironies, it also stings like alcohol on a fresh wound.

And yet, I still love it, and would never give it up.  Pony has been one hell of a ride, and I believe it has made me a better person.

As I said in my final episode post, I'm going anywhere.  I'll still be around these forums regularly.  Many more Mondays, many more blogs.  I just wanted to say this closing word about the show and its impact on me.

Before I end this entry, I wanted to share this video clip, which I feel absolutely, perfectly sums up myself and the entire adult MLP fandom.  (Sometimes, you gotta learn to laugh at yourself.

Okay, guys, thanks for reading. 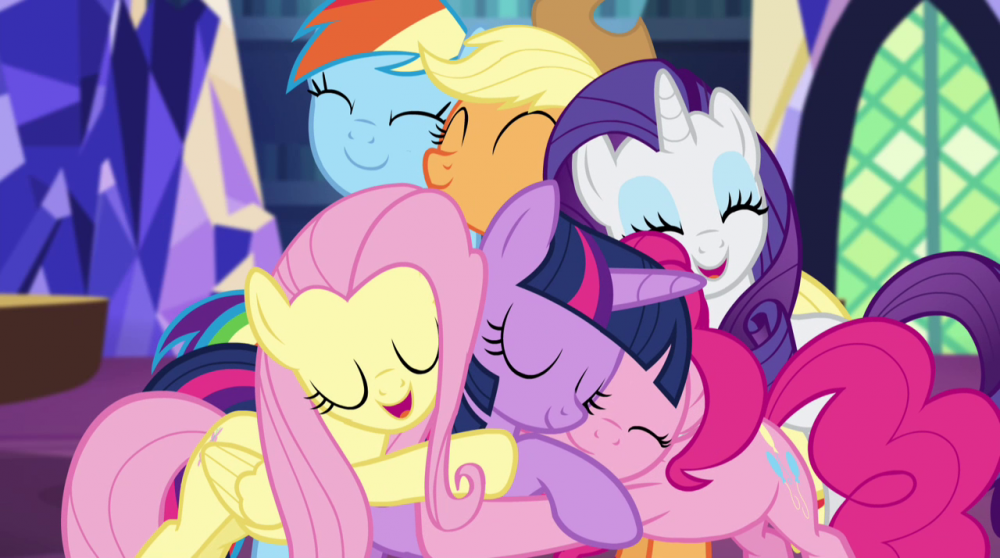