Hello, everyone. It's been awhile, hasn't it? Well, there's some new stuff in the game I wanted to tell you about, so I figured I may as well put up another development update.

Now, I know I promised you that Nature Hills would be joining the team, and Ponyville would be in the game with the next update, but sadly, this didn't happen. I don't have the assets I need to add them into the game yet. So your going to have to wait a little while longer for that. Sorry, everyone.

Luckily, I have found some new stuff to include that will help pass the time until I'm able to continue with the main story.

This feature was hinted at several times in the past, but as of now, it's finally in the game: ALCHEMY.

The player is now able to collect raw materials in the world and use them to craft and upgrade various items to aid them in their journey. While a handful of items are sold at a vendor, the majority of them will be found in the world, either found in the environment, dropped from monsters, or awarded for completing a side quest. The Playing Manual has also been updated with an explanation of the Alchemy system, just in case you need a refresher course on how it works.

There's many things you can do in Alchemy, including:

Exciting stuff, am I right? I can't wait to see how it's used in Let's Plays and the like. Especially when the player is going for a certain ultra powerful weapons, which may or may not be a reference to my primary character in The Lord of the Rings Online. But I'll leave it up to you to figure out how to get that monster on your own.

The Ember Pony has seen a HUGE overhaul for this update. No longer focusing on damage over time, they now concentrate on physical DPS using their equipped weapons. While they still have a handful of magic attacks for crowd control and the like, they definitely have the strongest physical ATK of the group. There's a couple of enemies that have high resistance to magic attacks, so having a powerful physical attacker will be very handy.

On a related note, the ATK stat of all the classes was changed to better reflect this change. Darkness Ponies no longer have equal ATK to Ember Ponies, but their PWR was beefed up a little to compensate.

Also, all the classes accuracy has been boosted to %100, meaning that barring any debuffs or special effects some enemies have, your melee attacks will always connect a hit. The enemies can still miss with physical attacks.

The inventory menu was changed to reflect the Alchemy update. There is now a 6th category for items: "Materials", where all those items you use for alchemy are kept, separate from the items you use in battle to heal HP and the like. So when you get a material, don't wig out when you can't find it in the "Items" menu; Just look in "Materials" and it should be there.

There's a couple of features I want to work on next before I make anymore progress on the main story. If nothing else, it gives me something to do while I wait on the tilesets I need to add Ponyville and the rest of Equestria to the game. I'll let you guys know when it's FINALLY time for that update to come out.

Until then, take care! 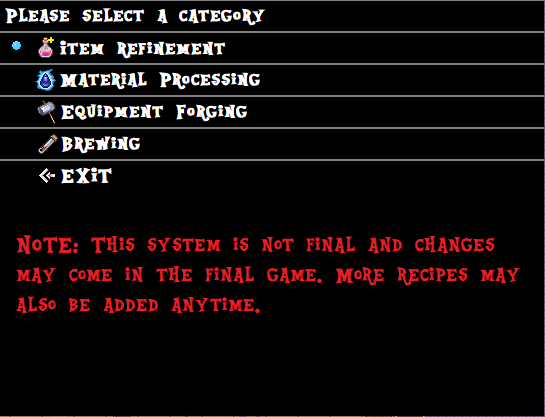