Ohai Mark, this is Woohoo here with another edition of Musical Manslaughter, because you can't spell 'slaughter' without 'laughter' and these songs are jokes.

In my last entry, I promised you all something in April. Welp, here it is, ya ungrateful pricks... Anyways, guess where we're going again? Yep, the past, to shred another shitty song that sucks ass. Much like the last entry, I'm shredding a song I used to dig but now can't stand anymore. How far are we going back? Just a year earlier than last time, 1990. Can you believe 1990 is now 30 years ago? Seems like only 10 years ago that 1990 was only 20 years ago. Damn it, I'm rambling again.

What song am I shredding? Much like last time, it's a song, as well as the band that made it, I used to dig a lot. However, as I got older, the worse it became. If you can't tell by the clues in the logo (which none of you do), that song is... "Thunderstruck" by this old-ass band called AC/DC... how do you pronounce their name?

How did I lose interest in this song faster than I lost interest in MLP? Let's break it down!

Before I tear the song a new one, I first need to talk about... the band. First off, how the hell do you pronounce their name? Is it supposed to be pronounced "A-C-Slash-D-C" or is it supposed to be "Ack-Slash-Deek"? Is the slash supposed to be silent? I don't know, man. Australians are weird, almost as weird as Canadians. Secondly, just look at them! 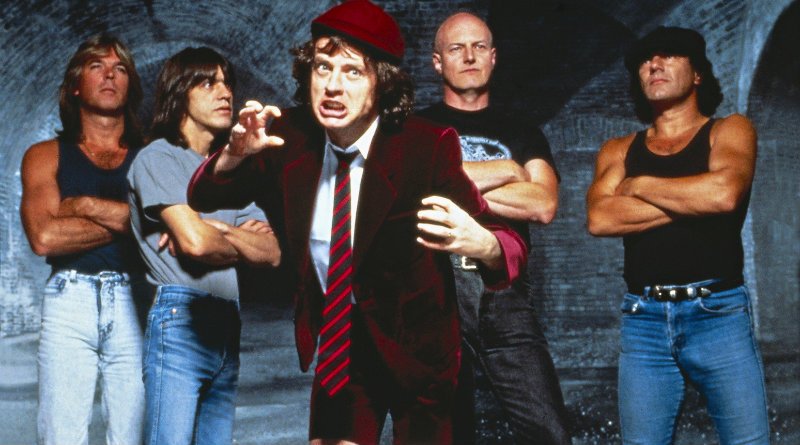 They look ridiculous, especially the 40-something guy in the schoolboy outfit! Sheesh, I guess Australia has a worse educational system than here in good ol' 'Murica. Also, why is Mr. Clean in this band? And who is that guy on the far right? He looks like a muscular French poodle man.

Ugh, I haven't even started song yet and I'm already flustered. Better save my anger. Now let's break it down for real this time.

Aw shit, here we go again. Why you gotta be so repetitive?! Ugh, I'm not even finished with the intro and I'm already close to blowing a gasket. Why is the intro so long anyways? Are they trying to bore the listeners? So after this minute long intro, which is like 1/5 of the song, we finally reach the lyrics...

I'm going to go off on a tangent here... What the hell was wrong with rock music in the 90s?! Seriously, all these weird songs like "Smells Like Teen Spirit," "Black Hole Sun," "Man in the Box," and whole lot of others, all of which have nonsensical and non-correlating lyrics. I mean, what was going on then? Were all these songs co-written by manatees? Were these songs trying to be weird like the 60s and 70s? I can forgive weird 60s-70s songs because nearly all the bands used some sorta of hallucinogenic drugs.  *sigh* I'll never understand why people in my generation like to glorify the 90s so much.

Ok, tangent over, back to the song. I really don't know what to say here... except for this. If you're on a railroad track, get the hell off! Do you have any idea what a train can do to you?!

Now I finally have an excuse to use this gif...

That... actually sums up how I feel. I'm thunderstruck by the sheer ridiculousness of this damn song. Why does song even exist? What purpose does it serve?! Why do we drive on parkways and park on driveways?! *sigh* Gotta calm down. You wanna know the worst part is? We're not even at the chorus yet! Not only is the intro too long, this verse, or possibly multiple verses are too long as well. Sheesh, has anyone ever heard the phrase "Don't bore us, get to the chorus"? I guess not. Y'know what? I'm just gonna skip this next verse about their road trip to Texas and their good time with ladies. Too much information, guys! Where's Tipper when you need her?!

Now we finally get to the chorus... right after this part.

I was shaking at the knees

Could I come again please

Yeah the ladies were too kind

This is it. After over two and half minutes of nonsensical boredom, here's the chorus!

That's it? That's the chorus? I waited over two and a half minutes just to hear a couple words repeated a few times?! What a rip off! That's like if you bought an Oreo with only a small amount of cream in the middle! Ugh, much like "Smells Like Teen Spirit," I can't believe I used to like this song! What was wrong with me? *sigh* Wow, I'm going off on a lot of tangents here. Better get focused again. As for the rest of this song, aside from a short guitar solo, it's nothing but choruses until the end. I'll never understand why artists do this at the end of songs. We get it, we've been thunderstruck! Just shut up already!

Alright, time to wrap this up.

And that was "Thunderstruck" by AC/DC... however you say their name. Do I hate this? Well, let me break it down for you in two words.

You all bought it! Hook, line, and sinker! Did you really think I would shred an AC/DC song? I mean, they have some lackluster songs, but none of those songs would be worth of an MMS entry.  But seriously, did any of you fall for this? Probably not because of the date I posted this and how overly exaggerated I made myself in this blog. Anyways, that concludes this entry of Musical Manslaughter. Tune in next time when I discuss my guilty pleasure songs. This is Woohoo signing off... or is it out? Can anyone tell the difference?!