As I've mentioned... somewhere on the forums, (and I believe in this blog) I've been just sick over the Windows 7 end-of-life for a long time, and I decided that the time had come to finally do what I should have done a decade ago and make the move to Linux.  Well, I did it, and just like I expected, it wasn't as intimidating as I thought.  I got Linux installed and working just fine, and I like it very much.  Oh, there's still a little learning to do, but I feel pretty well acclimated.

However, after much research, testing, thinking, and "soul-searching", I decided that I need a Windows install as well for new games that have poor Linux support.  So, I bit the bullet and did a Windows 10 install on a separate drive.  I feel it's the best course of action in order to have native compatibility for the latest and greatest games, but make no mistake, Windows 10 is a horror show.  I mean, it looks and feels basically the same as 7, but ho-boy, it isn't 7, lemmie tell ya.  The telemetry, the privacy violations, the strong-armed updates, the lack of control, f*cking Cortana (oh yeah, and btw, f*ck you, Microsoft, for punking that from Halo.  Yeah, yeah, I know Halo is your IP, but f*ck you, anyway.  The real Cortana is awesome.  Your Cortana sickens me.  It cheapens and degrades the Halo universe to have it associated with Windows 10.)--it's a nightmare.

How bad is Windows 10?  Well, let me put it this way: I have never used Linux before in my life up until about two months ago, and I've used Windows exclusively for my entire life, and it still took me far longer to disable and remove all of the nastiest, privacy violating sh*t from Windows 10 than it did for me to learn Linux from scratch.  That oughtta tell you something.

Why don't I illustrate my experiences with Windows 10 vs Linux with some picture analogies: 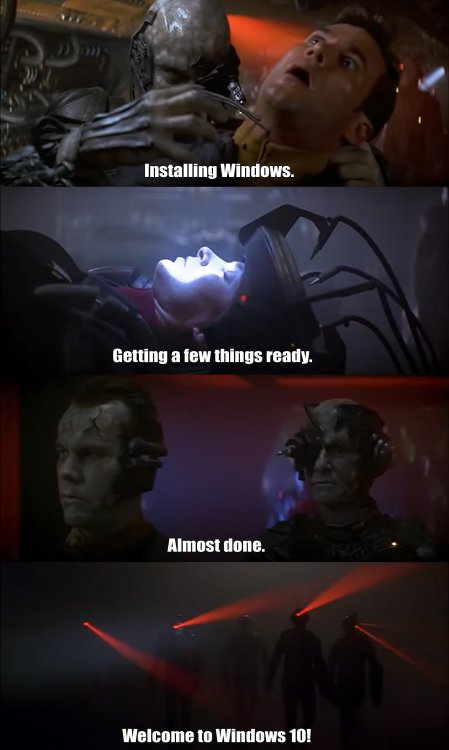