Tallest Purple: Weren't you banished to Foodcourtia? Shouldn't you be... frying something?
Zim:                Oh, I quit that when I found out about this!
Tallest Purple: You "quit" being banished?
Tallest Red:     The Assigning is over, Zim.

I will stop there (for now), because I could quote from Invader Zim all day long.

And happily, this is the next Cartoon Show Classic I will be delving into. Invader Zim (IZ) is the brainchild of Jhonen Vasquez, creator of the comics Johnny the Homicidal Maniac and Squee, the former about a, you guessed it, homicidal maniac, and the latter about a kid he once traumatised. This is a man with a uniquely dark view on life and society, and while largely toned down in comparison to the comics mentioned above, IZ  shares the twisted influences of its creator. This ultimately led to the show being cancelled after 2 seasons for not appealing to Nickolodean's core demographic, but also led to its massive popularity among older teenagers and adults who watched it growing up. I was one of those older teenagers, so this cartoon has a special place in my heart. So I'm gonna review it, and you all get to come along for the ride with me!

The Setting
IZ takes place (mainly) in a future version of Earth that features a somewhat technologically advanced but intellectually and socially regressive society... the kind where children go to Skool (sic) to learn something (it's not usually clear what) that will hopefully make them less of a burden on an already burdened society. (Yes, I am using the word society quite frequently, but since a lot of the show is basically a commentary on our real life society, I won't apologise for it.

However, Earth is not alone in harboring Not-so-intelligent Life. You see, out in space, an alien civilization is busy conquering... the Irken Empire, led by its sinister leaders, Almighty Tallest Purple and Almighty Tallest Red. They share the distinction of being the same height, and by virtue of being the Tallest of their species, co-rule their race from the flagship of their Big Spaceship Gang Armada, The Massive. Of course, following the theme of the show, they are rather stupid, barring some occasional moments of brilliance/competence, and are actually figure heads, while the Irken Control Brains are really pulling the strings of Operation Impending Doom 2 - a bid for Galactic Domination. At the forefront of this plan are the Invaders, assisted by their robotic SIR (Standard-issue Information Retrieval-slash-thermos) units. An Invader's job is to disguise themselves and blend in with the inhabitants of other planets while learning their weaknesses and working towards their downfall. All of which makes them more Infiltrators than Invaders, but I guess "Infiltrator Zim" simply wouldn't have the same ring to it. (Actually, that sounds more evil/sinister/badass to me.

It is during the Great Assigning of Invaders to their target (read "victim") planets that our eponymous villain-protagonist arrives, having seen the proceedings on the news. Despite the bit of dialogue above, the Tallest agree to assign Zim to a planet (although secretly, they just want to get rid of him, and are sending him to an area of space they think is empty) and guess what, it's Earth where he ends up, along with a companion robot the Tallest put together on the fly, not wishing to waste resources on him. This is GIR (no one knows what the G stands for, not even GIR.)

Back on Earth, while scanning the skies, a young human worm-baby boy named Dib Membrane catches the tail end of the transmission, alerting him to the fact that something is coming to Earth from beyond the stars... thus is set up the beginnings of an epic battle of freedom vs tyranny. This, my friends, is the beginning of Invader Zim.

The Characters - The Bad Guys 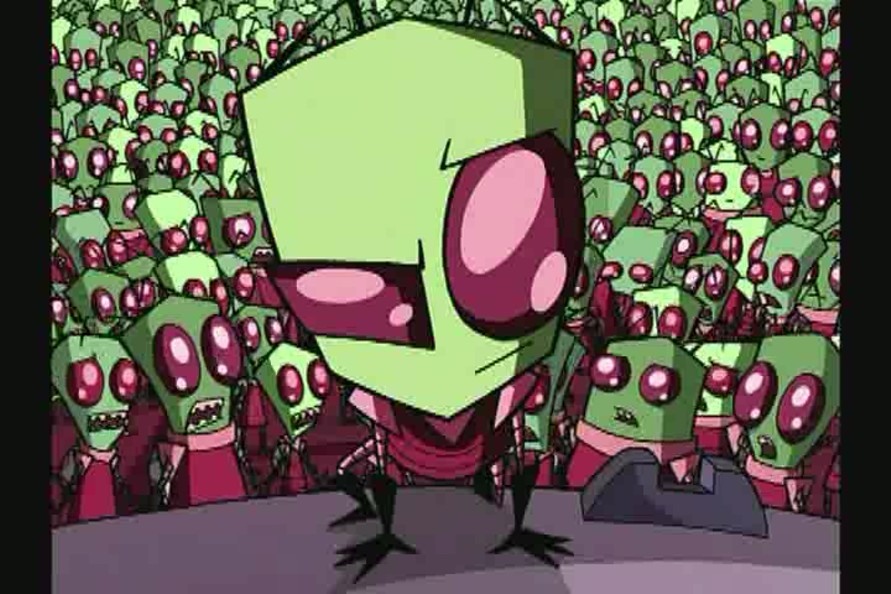 If you wondered why Operation Impeding Doom 2 is so called, meet the reason that Operation Impending Doom failed in the first place. Yup, Zim singled-handedly ended the Irken's first attempt at conquering known space, by going on a destructive rampage on an alien planet with a gigantic fighting robot. Well, the planet was alien to us, at least, not alien to the Irken race; it was their home planet he was on at the time. Here is an excerpt from his trial:

Control Brain: Invader Zim, for single-handedly ruining Operation Impending Doom...
Zim:                "Ruined"?! I blew up more than any other Invader!
* Red spits out his drink *
Tallest Red:    You blew up all the other Invaders!

(Hey, I didn't promise not to quote anything ever again!)

Zim, while considering himself the best of the best when it comes to Invaders, is actually a downright incompetent fool with delusions of grandeur, a bumbling moron whose sheer stupidity is matched only by his own ego and love of snacks (Insert your own joke about any relevant politicians here.) His plans are always extremely convoluted and at times downright illogical, such as pumping cows full of human dookie (a word that gets used A LOT in this series), and that's when he can even remember them. In short, he is his own worst enemy, even more so than his putative rival, Dib Membrane (see below). 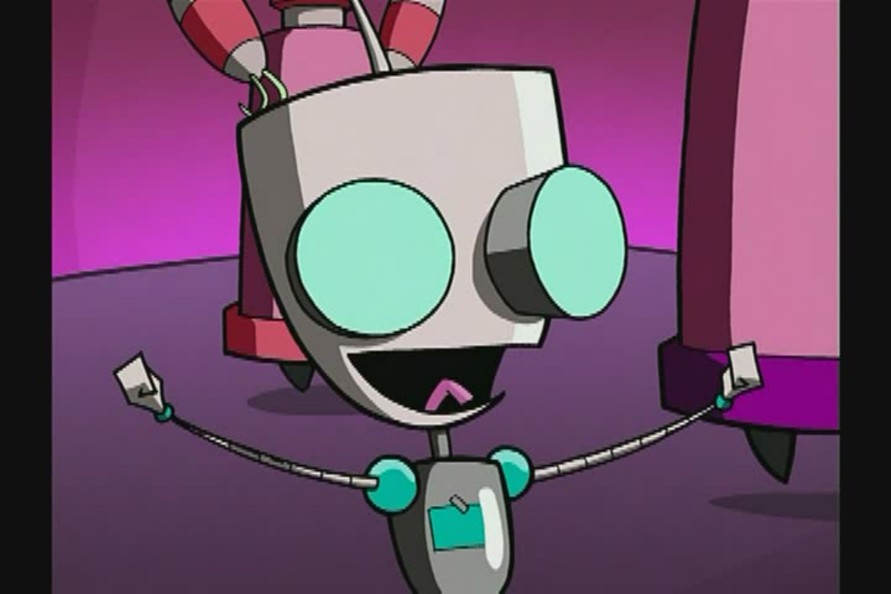 With all the raw processing power of a gumball, paperclip, loose screw and two pennies in his head, GIR is Zim's robot assistant. Not so much stupid as easily distractible, but also that too, GIR goes along with Zim's plans much as a younger kid brother would, and it's a 50-50 chance whether he will aid or hinder whatever plan Zim has cooked up. Despite being a robot in a dog suit, GIR loves to eat all kinds of food, and he isn't picky about what or whether it's currently still alive or not (again, 50-50 chance). He occasionally goes into Duty Mode, and becomes much more competent, although these intervals usually don't last very long, and the one occasion it does, he becomes a very scary little robot indeed. He is hilarious, and you will quote everything he says. 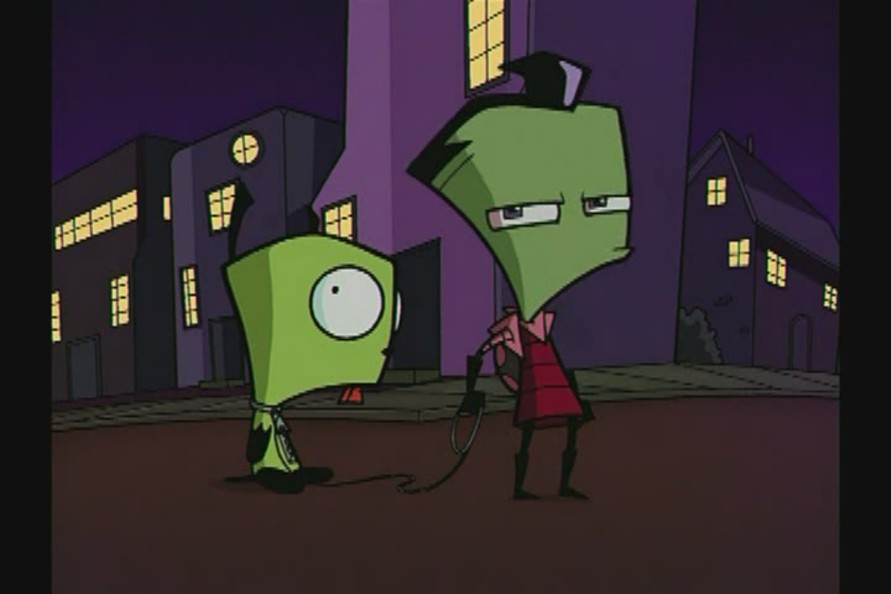 Zim and GIR in their disguises. 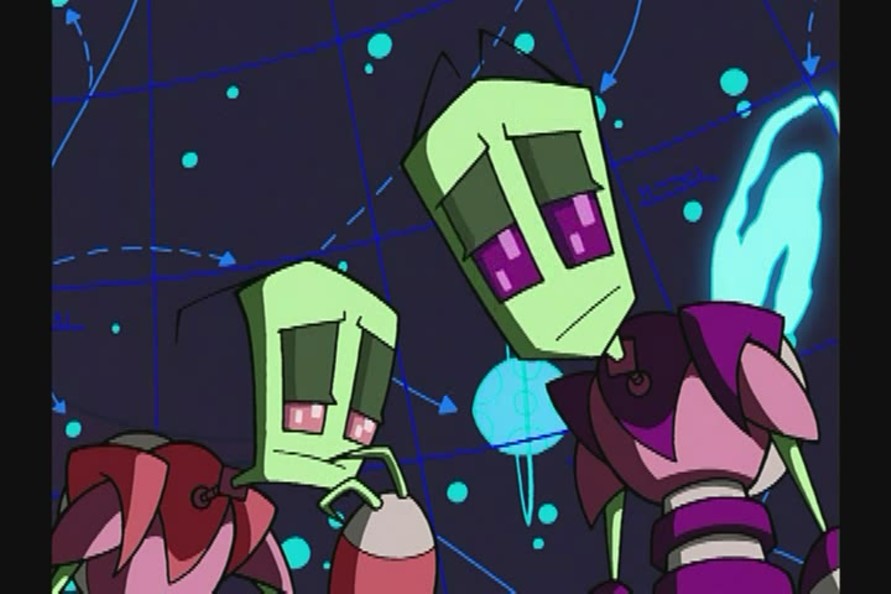 As explored above, these guys are large (well, tall) and in charge, ostensibly. Taking it easy at the top, they generally cruise around in The Massive, gobbling snacks and ordering their lackeys to get them more snacks, while occasionally taking over planets and turning them into parking structures, food courts or whatever they feel like at the moment. Having thought they'd gotten rid of Zim, they are rather put out when he calls them after reaching Earth. Zim, of course, is oblivious to their contempt, and firmly believes they admire him as much as he admires himself. 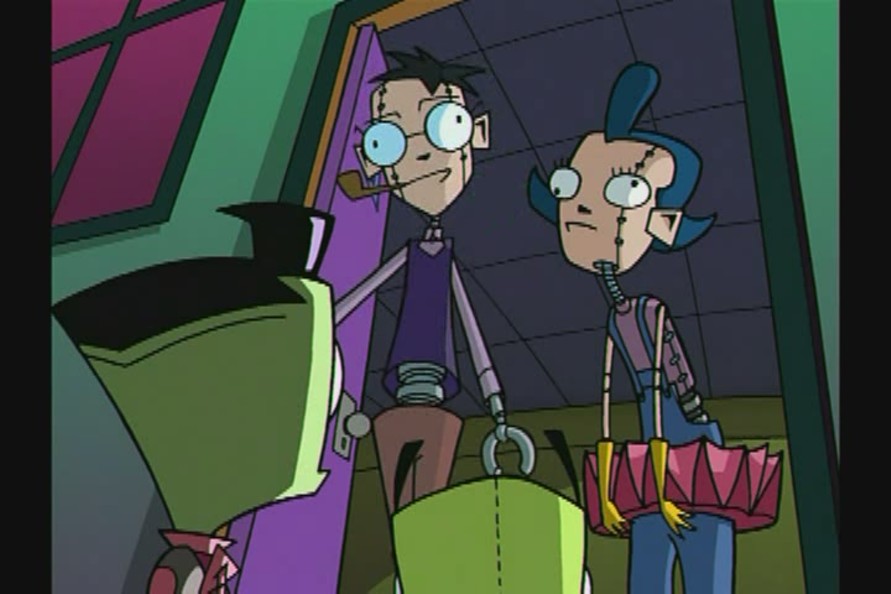 Created as part and parcel of Zim's home, the Robo-parents are there to help sell the Masquerade. How effective they are is a bit of an open question, not only because (as with most Irken technology) they sometimes malfunction, but because human society at large seems determined to overlook the obvious signs that there is something deeply wrong at Zim's house. 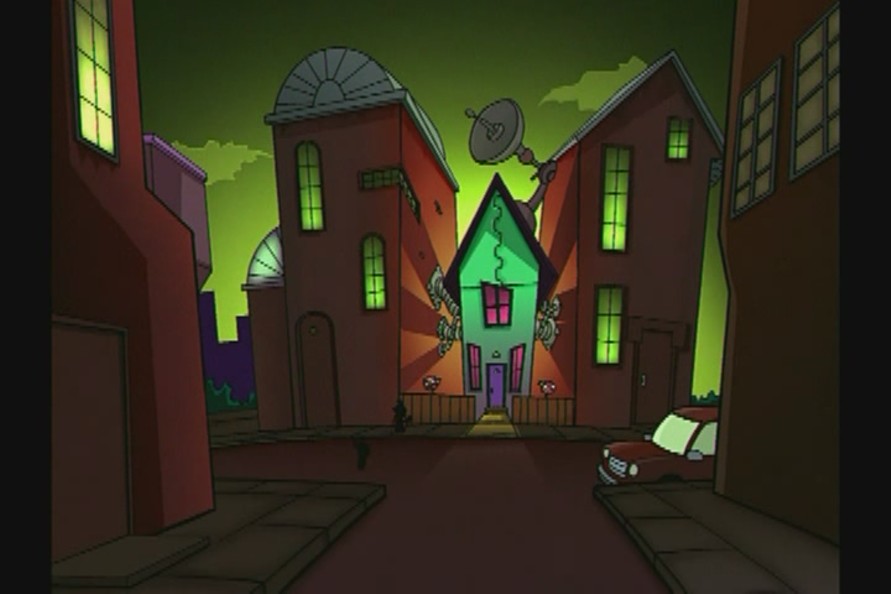 A character in its own right, Zim's house is part cover, part evil base, with a long-suffering AI in charge. Like most Irken technology, its effectiveness in aiding Zim in his conquest is rather hit-or-miss, but at least it keeps the rain off of Zim (said rain due to pollution being caustic to Irkens - this is a plot point in an episode). 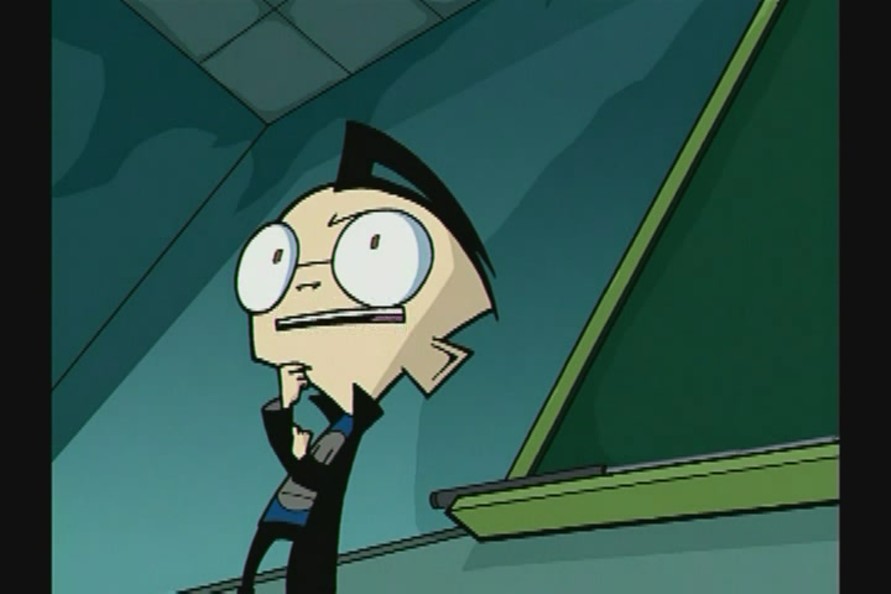 A budding paranormal investigator, Dib by chance overhears the Great Assigning via radio signal, and is one of the few people on Earth who knows (or cares) that Zim is an evil alien bent on enslaving the human race. His attempts to prove this are always doomed to fail, most due to the sheer stupidity / oblivousness of the people of this world. Although he also has a deserved reputation of "crying wolf", which has done him no favours in the believability department...

Skoolkid:              What's wrong with you? All you talk about is aliens and ghosts and seeing Bigfoot in your garage...
Dib (Defensively): He was using the belt sander.

Despite this, Dib is firm in standing against Zim and his various plans for world conquest, no matter the cost to himself...

Oh, and he might be a clone of his father...

Earth's smartest scientist, Inventor of Super-Toast, Hater of Santa Claus (long story) and father (possibly) to Dib and Gaz, the Prof nevertheless is unable to accept that things such as aliens, ghosts and other supernatural phenomena are real, which they clearly are. 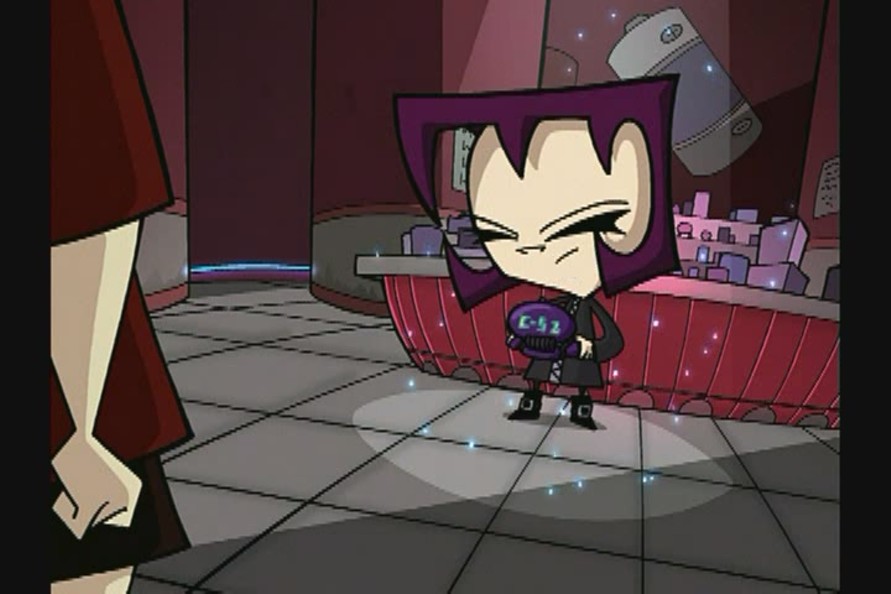 One of the few who know of Zim's real identity and plans for the Earth, Gaz simply doesn't care that he wants to destroy Mankind because, as she puts it, "he's so bad at it." Gaz is unpleasant, surly and dismissive of her brother (and everything else in life, apart from her video games)... and that's before you get on her bad side. PRAY YOU DO NOT GET ON HER BAD SIDE! 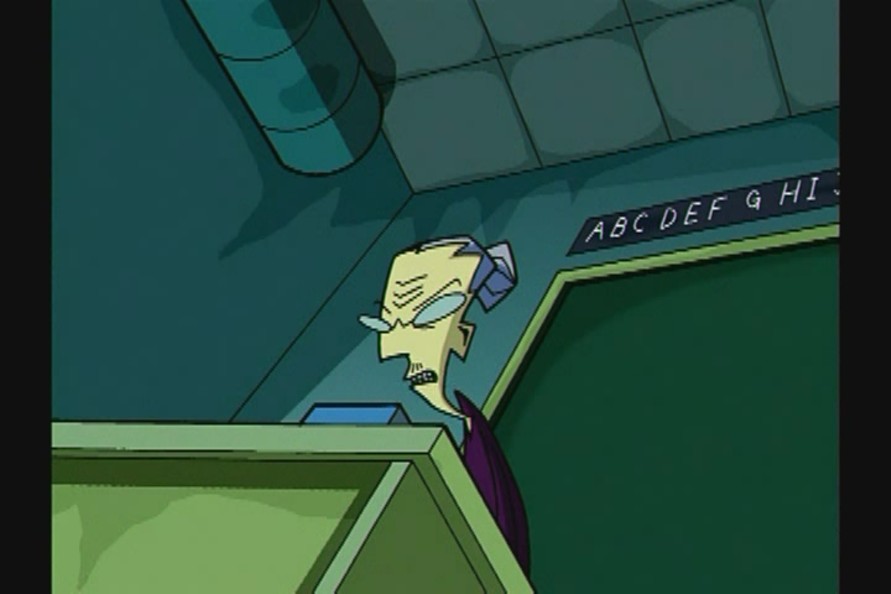 Dib and Zim's teacher, Ms. Bitters is well-named. This is what Gaz would probably grow up to be in a few decades time. An old woman, Ms. Bitters is bitter, strict with her students and possibly not even human. 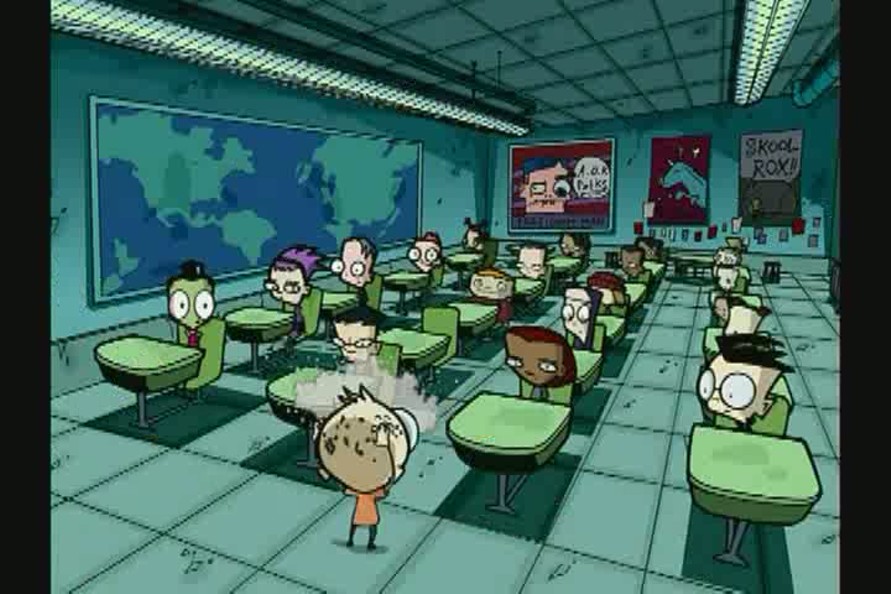 The rest of Dib's class are not exactly intellectual powerhouses, and they often get pulled unwillingly into the war between Zim and Dib, but most of them seem pleasant enough.

Final thoughts
The sheer brilliance and insanity of this series needs to be seen to be believed, and I would highly recommend it (if you haven't already seen it somehow) to anyone who appreciates a little bit of black humour. Those with sensitive constitutions, however, need not apply. Despite being a cartoon, it can be a bit disturbing and even gruesome at times. There is also a movie on Netflix subtitled "Enter the Florpus", set a while after the end of the series, which is also highly recommended. As usual, feel free to comment below, if it takes your fancy.