Pip pip da doodly doo, Woohoo here with... it's be how long since I've done a blog?! Wow, I've been really uninspired this past year. Thankfully, I've finally gained the inspiration to make a new entry. Now that I'm done rambling, let's begin.

Years ago, when I used to be a Brony, I used to make review blogs of every season of My Litle Pony: Friendship is Magic. However, I never completed the project as my interest in the show tanked after season 8. Those entries have since been deleted. Fast forward to 2021 and I've been wanting to do another season review series. But with what show? It didn't take long to find one. This year is the 25th anniversary of a show that I fondly remembered as a kid.

Yep, Hey Arnold! The slice of life Nicktoon created by Craig Bartlett about a football-headed boy and his daily misadventures in the city. Man, my nostalgia is exploding right now. Anyways, much like my old now deleted MLP: FIM season reviews (for those who actually remembered them), I'm gonna rewatch every episode of this blog's season, rate them, and finish it out with my final thought and a pie chart (much like PieGuyRulz when he used to review SpongeBob's seasons.) Now let me show the ratings I'll be using...

I'll be starting of Season 1 because that's where the show starts, which originally aired from October 7, 1996, to February 12, 1997. (Though some episodes weren't aired until S2 and even 3.) There are 26 episodes consisting of 48 11-minute segments and 2 22-minute specials. One more thing, the episodes will be listed in the original production order instead of airing order (mostly because of Nick's nonsensical airing.)

Can the first season of Hey Arnold hold up? Could my own nostalgia blind me? Brace yourselves, we're going in!

7a. Operation Ruthless: Bold | 7b. The Vacant Lot: Bold

...And that was every episode of Hey Arnold Season 1 reviewed. Now let's look at the chart. 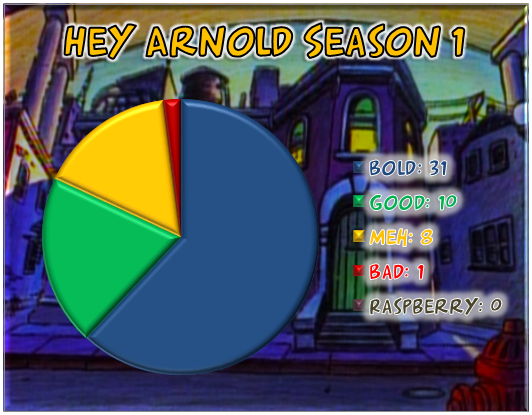 Wow... just wow. Look at all that blue! To say that the first season has held up well would be a massive understatement. Trust me, I wasn't blinded my nostalgia. Normally with any show's first season, there's a lot of growing pains... I guess not. I do have one "critique" and it's the animation. It's quite rough and inconsistent, especially since the season was produced by two different studios, but I think it does have a charm here. S1 did a stellar job in establishing the setting and the characters. However, this also kind of worries me a little. Since the first season scored so high, I fear the later seasons won't be nearly as good... but I'll cross that bridge when I get to it.

For this season's rating, it's quite obvious that Hey Arnold Season 1 is definitely a BOLD Season.

Now for my Top 5 Episodes. Aside from my number one, it was really hard pick since there were so many great episodes...

Now for my "Bottom" 5 Episodes. I put "bottom" in quotes because, aside from my number one, the episodes here just meh...