I was hoping there was gonna be a topic or something, but seeing as there's not  (at least there wasn't at the time I started writing) I can't help but dust off my old blog that's had MORE than a half-decade's worth of dust built up, and commemorate the big day since this place means a lot to me.

How funny is it that, the entire generation of MLP this place was dedicated to transitions to the new one, just a few days before this place turned 10, huh.

I became an avid fan of colorful horses the very day I watched the first two episodes, on April 5, 2012, and very rapidly I scavenged the internet for places to get more pony, for art, memes, news, etc, and most of those kept me going through the few years I was big into horses. As memory serves, having liked the idea of forums and using one a lot at the time, I looked up something akin to "mlp forum" on Google to see if there is one. Lo and behold, this one showed up, and was quite hefty in content even at the time. The interface was very clean and inviting, and already I was thinking of posts I wanted to make in different categories. Some days later, on the 24th, I finally joined this place, not very long after it was made relative to now. This was the site layout (the screencap is of January 2013 but it was still really similar; the previous versions of the site around then are broken on the Wayback Machine)... 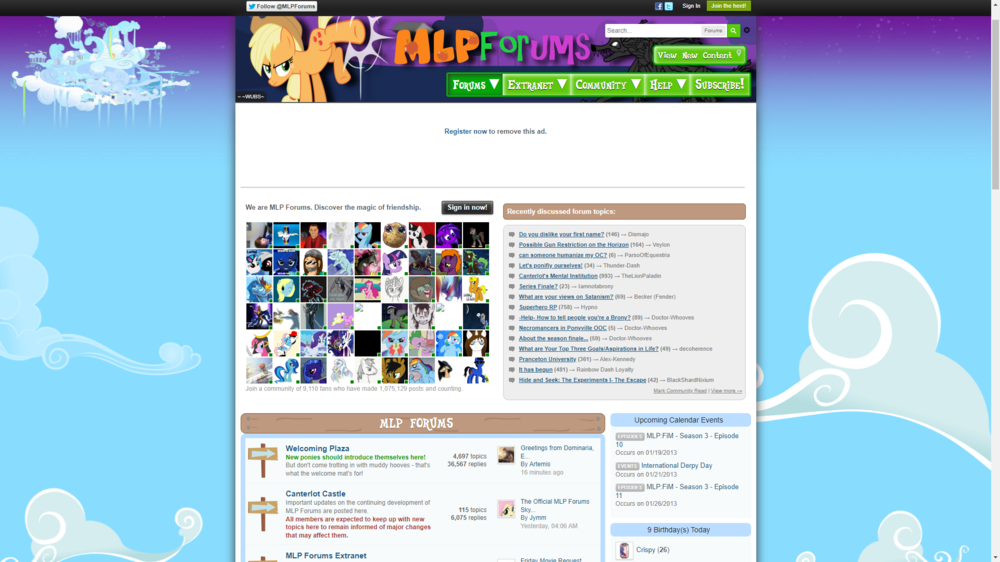 ...and this was the banner at the time. (I'll post the other ones I've collected over the years at the foot of this post.)

And gosh, was I ever active here, my "active" time was from April 2012, to late '13, early '14 I guess, the earlier years mostly on my iPad that I was pretty obsessed with at the time haha. I can't see how many topics or replies I made but, I have at least 100 pages of worth on it according to my profile, so that's wacky! I've retained a lot of good early memories here, such as requesting a signature of my 3 favorite bg ponies (Berry, Lyra, Colgate), having a "Ask Lyra" thread, participating in the weekly movie nights on Equestria TV and being a part of the Poniverse crew at the first BronyCon I went to, roleplaying a little, having fun with nicknames, making my first ponysona (and first animal persona thing period), making blogs, enjoying the funny unique emotes, discussing all things horse (about the show, EQG etc. and other stuff), and most importantly making lots of friends, getting to know em a lot better on Skype (and was introducing to messaging stuff in general from the process), and getting to meet a lot of said friends in person at BronyCon in 2013, which was my first convention ever, and to a smaller extent going to see EQG2 in the theater with a particularly cool one, haha.

I could fill a small a novel with all the ways pony has made my life so much better, all the things I've done, all the friends I made, and all the things it introduced me to (learning about my sexuality, going to conventions and travelling to see friends, vectoring and lots of things about graphic design, learning about fandom stuff in general, etc.), and all the things I loved from the show itself, but an entire chapter or two would definitely be dedicated to this place, probably the biggest in terms of any websites (among them the likes of EQD, tumblr, the pony Memebase site, etc.). I fell out of following pony stuff around 2015-2019, but I made sure to come back for the last season, and this place was one of many things that helped bookend my first and last experiences as a fan of the series for me, and even beyond a little.

I hope all the wonderful peeps I interacted with back then are doing well now, and maybe come back to post some reminiscing stuff as well. And I hope this place continues to thrive as long as pony does! Happy big 10, MLPF!!!

Now, here's a collection of all the MLPF banners I've saved over the years (cause I always liked 'em), including the BronyCon 2013 one where M.A. Larson photobombed our group without us knowing until the picture was taken! I still remember our graphic designer mod changing the banner to that right on the spot, I'll never forget that moment. There's many more you could find by going to a random iteration of the site on the Wayback Machine as well, the site layout may be broken but the banners are still there.

One very last thing I'll leave y'all off with, before I start getting nostalgic and diving back in to my whole post history and wanting to post a bunch more of that in here, is this little thing from 2012 that's scarily, extremely relevant right now. 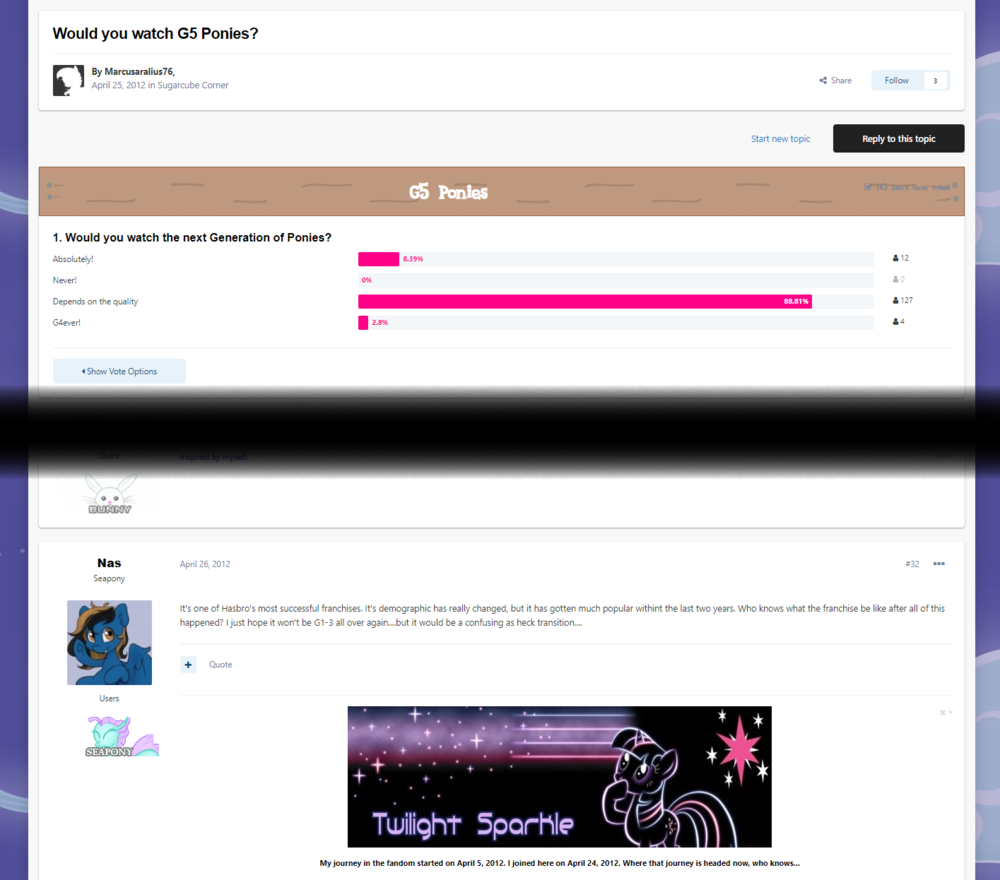