And his name is John-- I mean Woohoo here continuing my project of rewatching and reviewing every episode of Hey Arnold. We're getting close to the end, folks. After finishing Season 3 did I start Season 4, which originally aired from March 1999 to June 2000 (mostly due to a few holdouts airing in S5.) Much like Season 3, S4 has 20 episodes but broken down to 32 11-minute segments and 4 22-minute specials. Also during this season and the next one, the animation was changed to being digitally painted (much like a lot of shows during the late '90s-early '00s.)

As with my last entries, I will be rating the episodes either... Wait, you should know the rating system by now! Sheesh! For many fans, S4 is viewed as the "worst" season of the show so I myself have some low expectations. Will S4 be as bad as most people make it out to be? Let's jump right in...

68a. Love and Cheese: Raspberry | 68b. Weighing Harold: Bold

...And that was every episode of Hey Arnold Season 4. Bring up the chart! 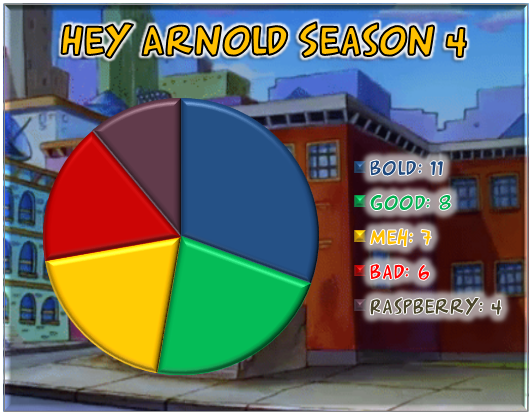 *sigh... again* Oh have the mighty have fallen... maybe that's a stretch. Season 4 is definitely a very... mixed season. While half of the season was made up of Bold and Good episodes, over a quarter of the season made of Bad and a whopping FOUR Raspberry episodes, more than S2 and S3 combined! Also, during this season is when the show's formula starts getting a little stale. Hell, a few episodes were just rehashes of ones in previous seasons, a practice that some shows do that I absolute hate (though it's not as bad here as in MLP's later seasons.) Now with the negative stuff aside, Season 4 produced quite a few fantastic episodes, including four stellar specials.

Now for S4's rating. I've pondered about this for a bit and, even though the Bold and Good just barely outnumber the rest, the four Raspberry episodes unfortunately give Season 4 a rating of a MEH season.

Onto my Top 5 for this season. I really didn't want to have all the specials take up nearly every slow so I tried really hard to diversify...

Now for the Bottom 5, which was much easier as nearly every entry was a Raspberry episode...

That pretty much wraps up my review of Hey Arnold Season 4. I can't believe I'm almost to the end. If you're wondering about my rewatch progress, I am almost finished with Season 5 and already watched the 2002 theatrical film. This is Woohoo... doing something involving exiting. Enjoy your Thanksgiving.