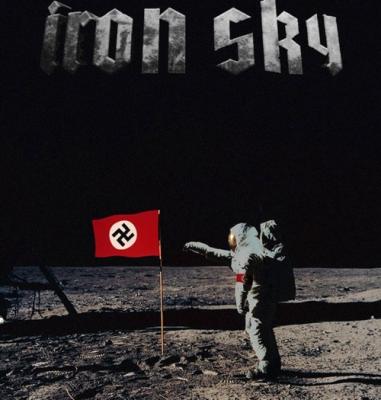 This one right here was an absolute gem. I was very pleasantly surprised at it. I was honestly expecting something of the quality of "Nazis at the Center of the Earth", but I got something infinitely better and far more humorous.

The basic idea behind this movie is that the Nazis fled to the moon in 1945 after realizing defeat was imminent. Now (actually in 2018) they've decided that they kinda want the Earth back and as a result stage a full scale invasion complete with flying saucers, zeppelin shaped spaceships, and, of course, a brilliantly over-designed superweapon.

This movie far exceeded my expectations in a number of categories. The acting was actually surprisingly good, far better than I've seen in any comparable movies, at least. The special effects, while maybe not quite top notch, were done excellently. Props and makeup at least seemed to know what they were doing, no Nerf guns or mustard makeup in this movie. All in all, very good quality.

Another plus for this movie is that at no point does it even begin to take itself seriously. From the black man turned white and swastika shaped moonbase to the flower-power getaway van and "Black to the Moon" posters, nothing even hinted at sensibility. I loved it!

However, I think the thing that made me like this movie as much as I did had to be its cynicism towards the world in general. It pulled no punches. The US president is highly 'Murrikan (and female, that's something), the highly illegal, treaty-breaking ("C'mon, it's what we do!") armed United States spaceship is named the USS George W. Bush (and is ludicrously overarmed), the treaty-breaking armed Russian spaceship blares the Soviet national anthem as it passes, the UN is depicted as a group of bumbling brawl-happy idiots... It's just great. Nothing is sacred.

In short, this is definitely the kind of movie I would expect myself to make.

9/10 Absolutely brilliant, wonderfully executed, and fucking hilarious. I would definitely watch it again.